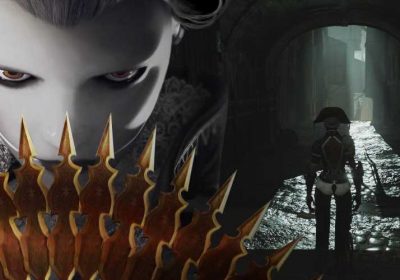 The Cite is one of three locations you can approach after completing Steelrising's Les Invalides the first time through. Of your three options, it is most certainly the most approachable. From here on out, the stages will have a number of alternate routes that open up by way of one of the three different traversal tools. However, this guide is primarily interested in working you through the twisted streets of The Cite while assuming that you do not have access to any of the aforementioned tools.

It is also worth noting that The Cite throws a number of new enemy types at you. Not only will you be facing off against former bosses, but you will be mixing it up with new variations on familiar Automats. Needless to say, there is a lot to take in here. But worry not, while it is easy to get lost in The Cite, this guide will do its utmost to keep you on track. Now, it is time to enter the flames of Les Halles. 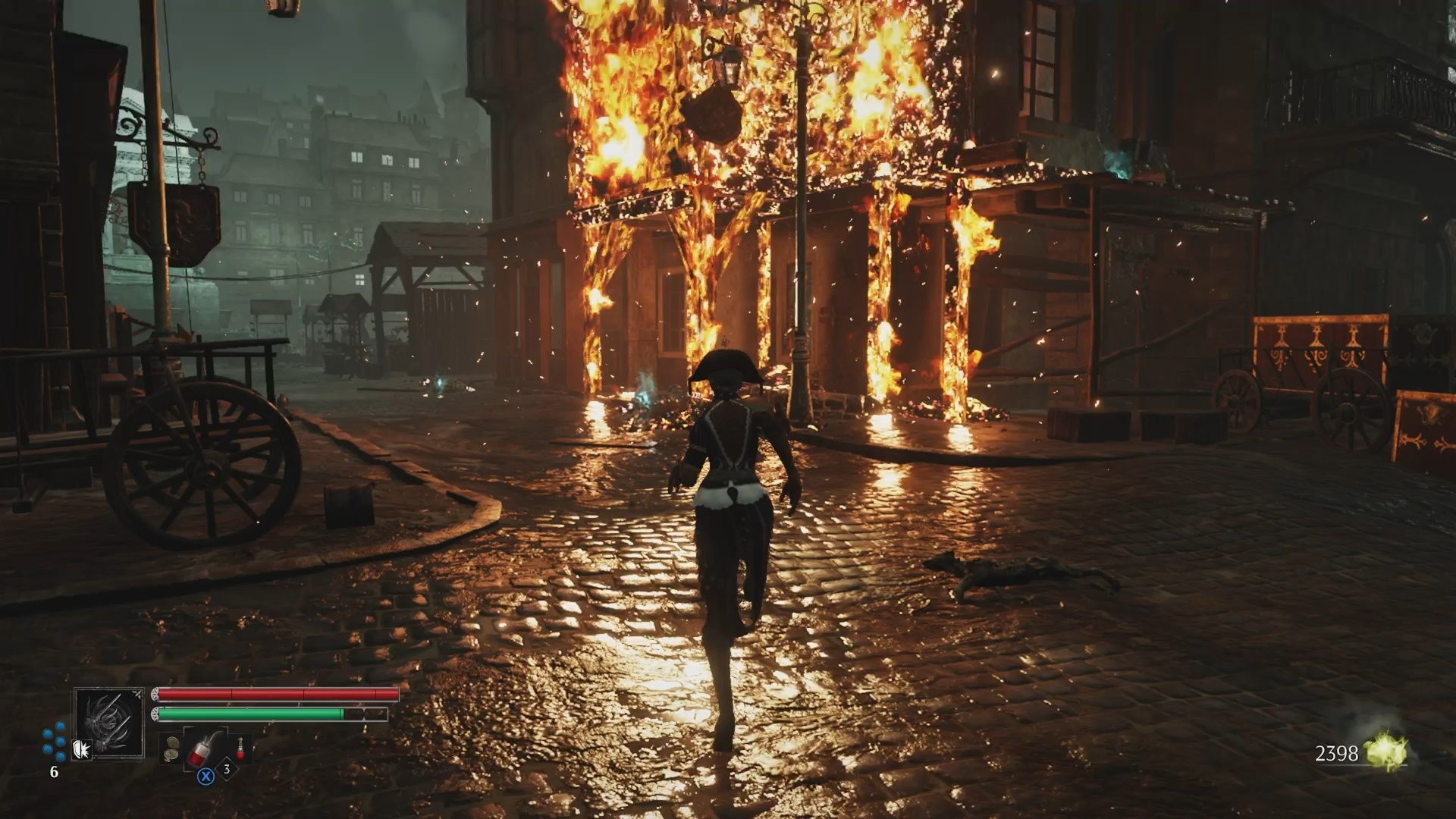 The second you turn the corner on your left, you will enter into Les Halles. You will be immediately greeted by a new Automat variation. We'll call them the Combustible Panther Automat. Much like the regular Panther Automat, these robots are quick and have lunging attacks, but are easily staggered. The big difference here is that the Combustible Panthers also like to explode themselves. That's right; If they start glowing, you know it is time to get the hell out of dodge. 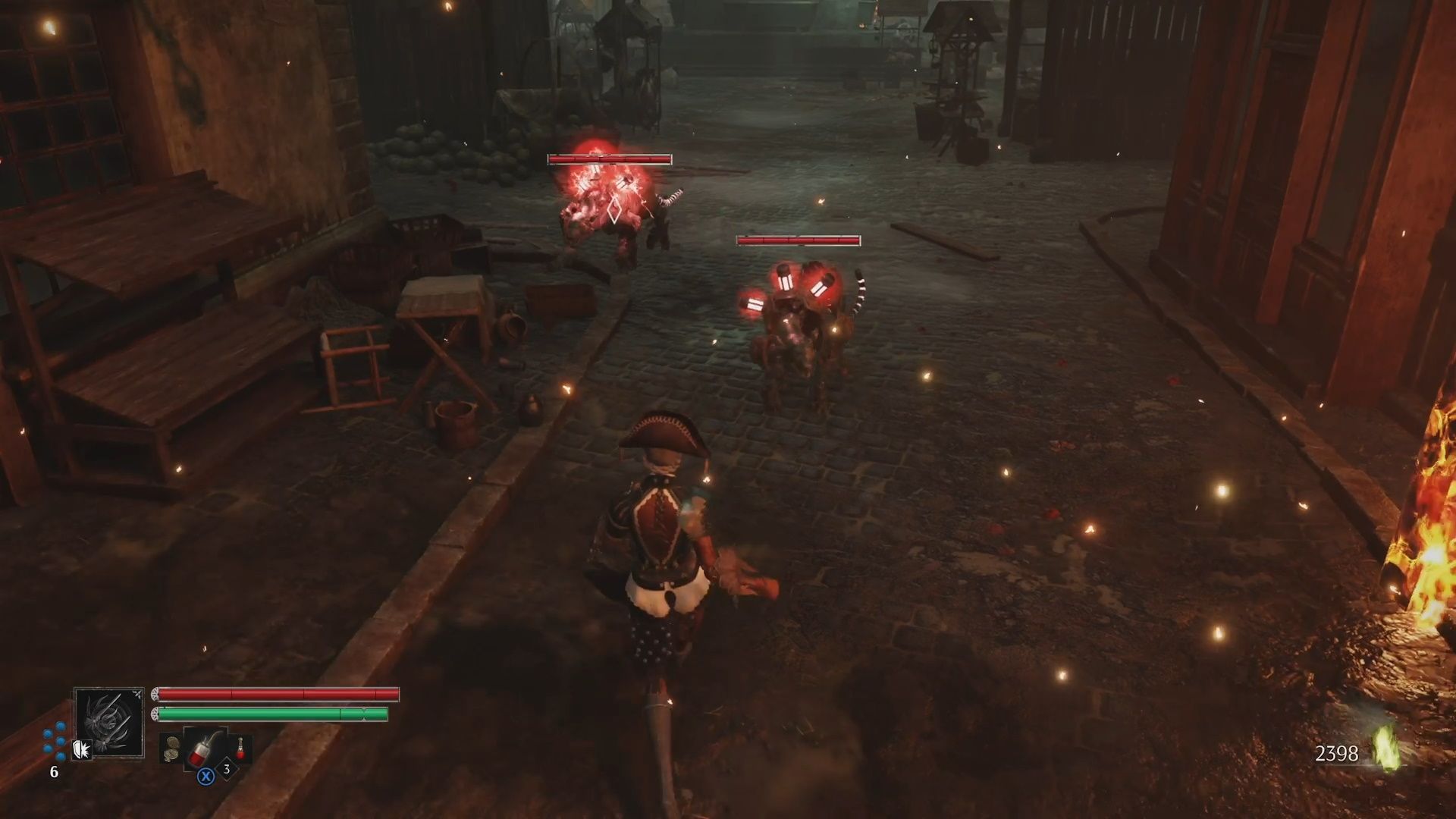 After you deal with the two Combustible Panthers, you will enter into an open-air market with stalls all around and a big fountain smack-dab in the center. There are a ton of Automats around. This includes the new Fencing Automat. The Fencing Automat is the same as the most basic Automats that the game has the offer, but they have access to parry. Whenever they strike a pose and wait for you to attack, they are in their parry stance. If you do accidentally hit them when they are in that stance, don't be too worried, you can dodge and avoid their counterstrike.

Other than the Fencing Automat, there will be a Ball-And-Chain Automat, and multiple Lancer Automats in the center of the square. There is also a Lancer positioned on one of the stall roofs that circle this area; they will be firing their cannon at you while you face off against the other robots. There are even more Combustible Panthers, Lancers and Snake-Bodied Automats positioned around the perimeter of this area. In fact, by the time you leave this town square, you will have cleared out about a dozen of them. 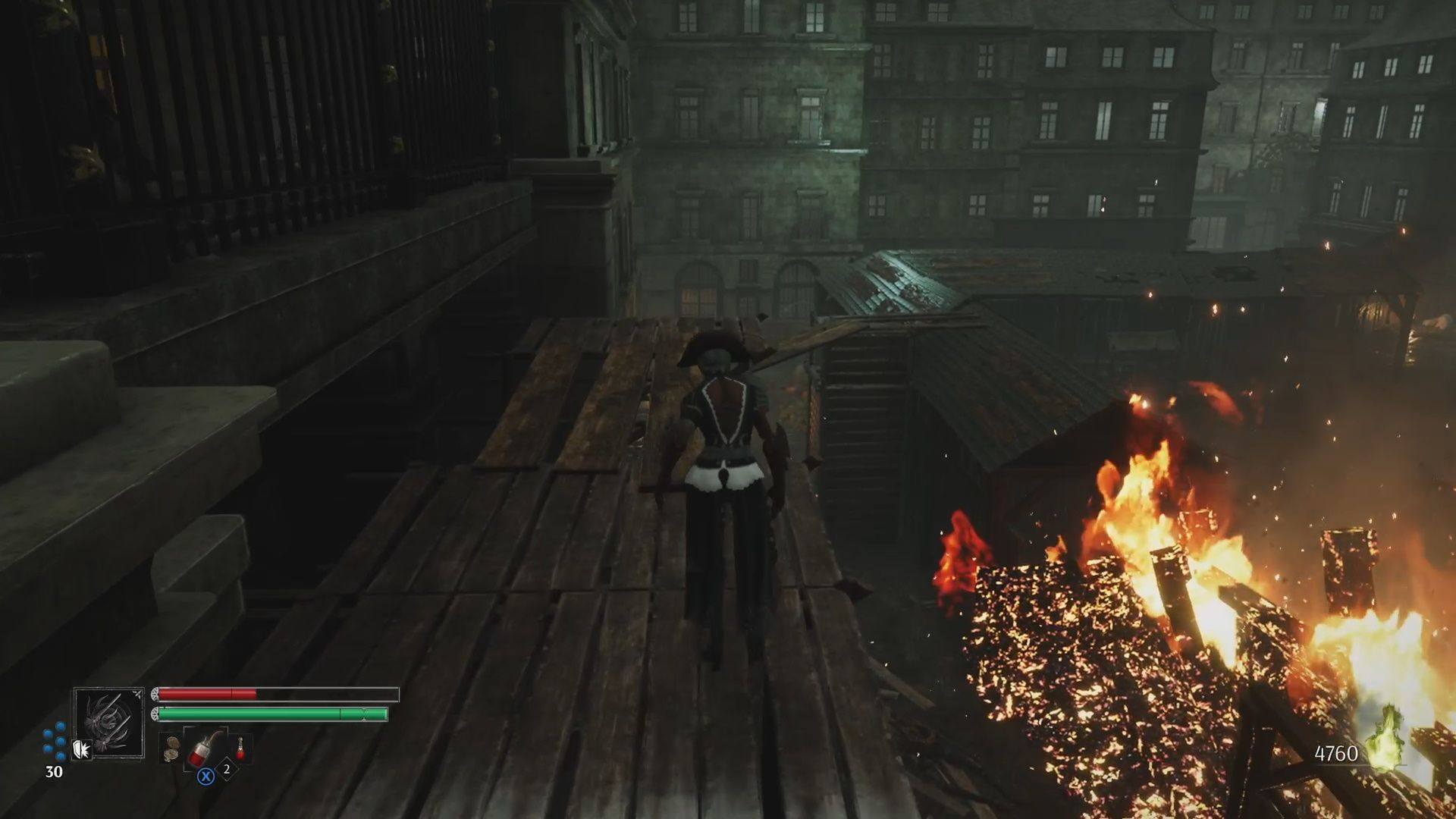 You will want to work your way around the perimeter, picking up goodies as you go. There aren't any treasure chests, but you will find a number of useful consumables strewn about. Go to the corner of the market where the Lancer standing on the roof is. Hop up onto the boxes nearby and jump over the wall, you can unlock a gate here. If you want to leave the market, look for a platform hovering above on the left. Jump up to it, and climb across the roofs of the stalls to get to the exit. From there, follow the streets, and you will enter into the Place Saint-Merri. 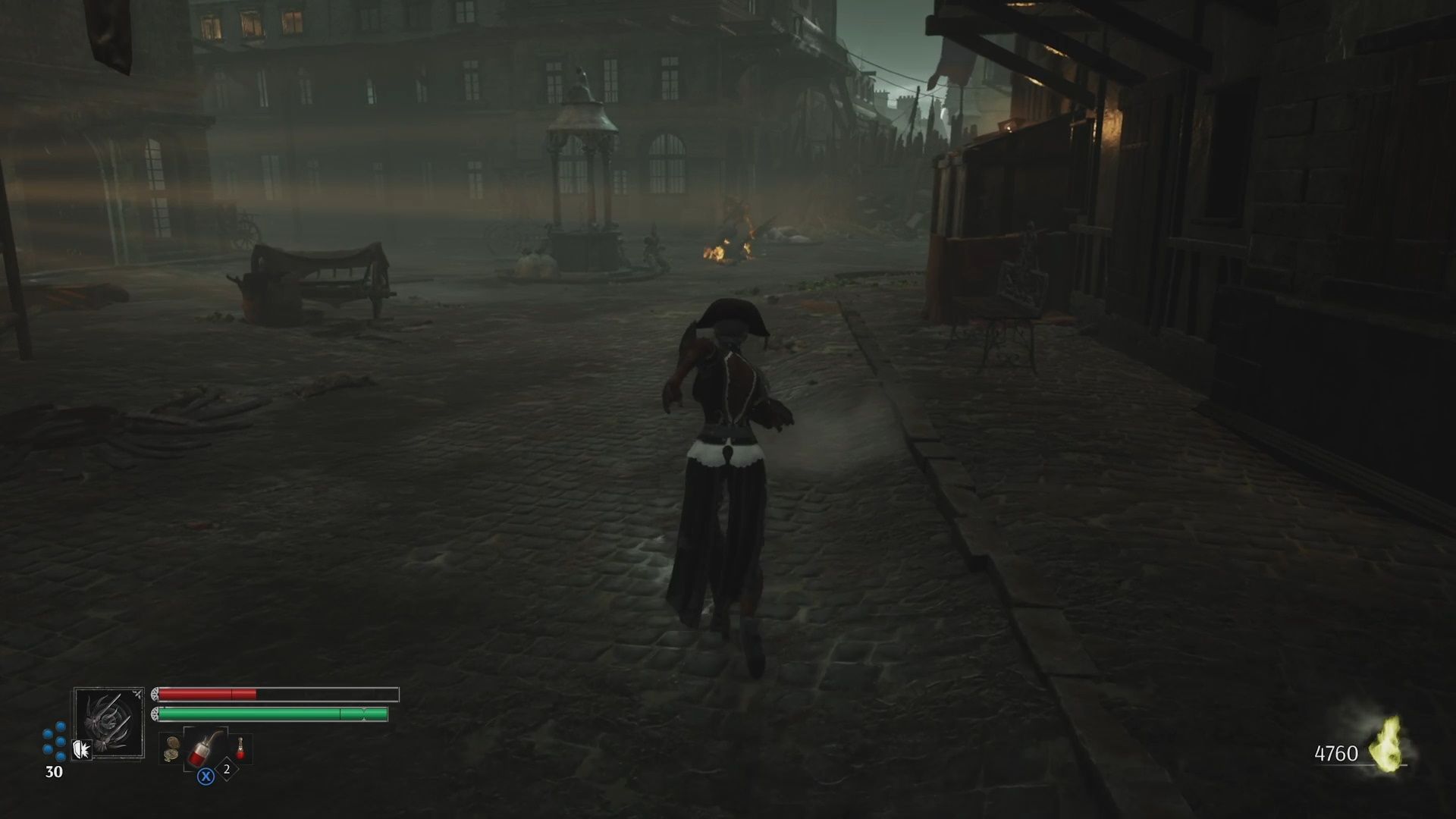 Once you arrive here, you will have to fight off two Fencing Automats, as well as an altogether new type of Automat. This one looks like an Automat that has lost its legs. It walks around on its arms. But don't let that fool you, it is surprisingly fast. It has a swiping attack, and spinning attack, and, much like the Combustible Panther Automats, this new type will lunge at you and self-destruct. We will call this new enemy a Lunging Automat. Just dodge past it, hit it in the back, and if it starts glowing, run away. 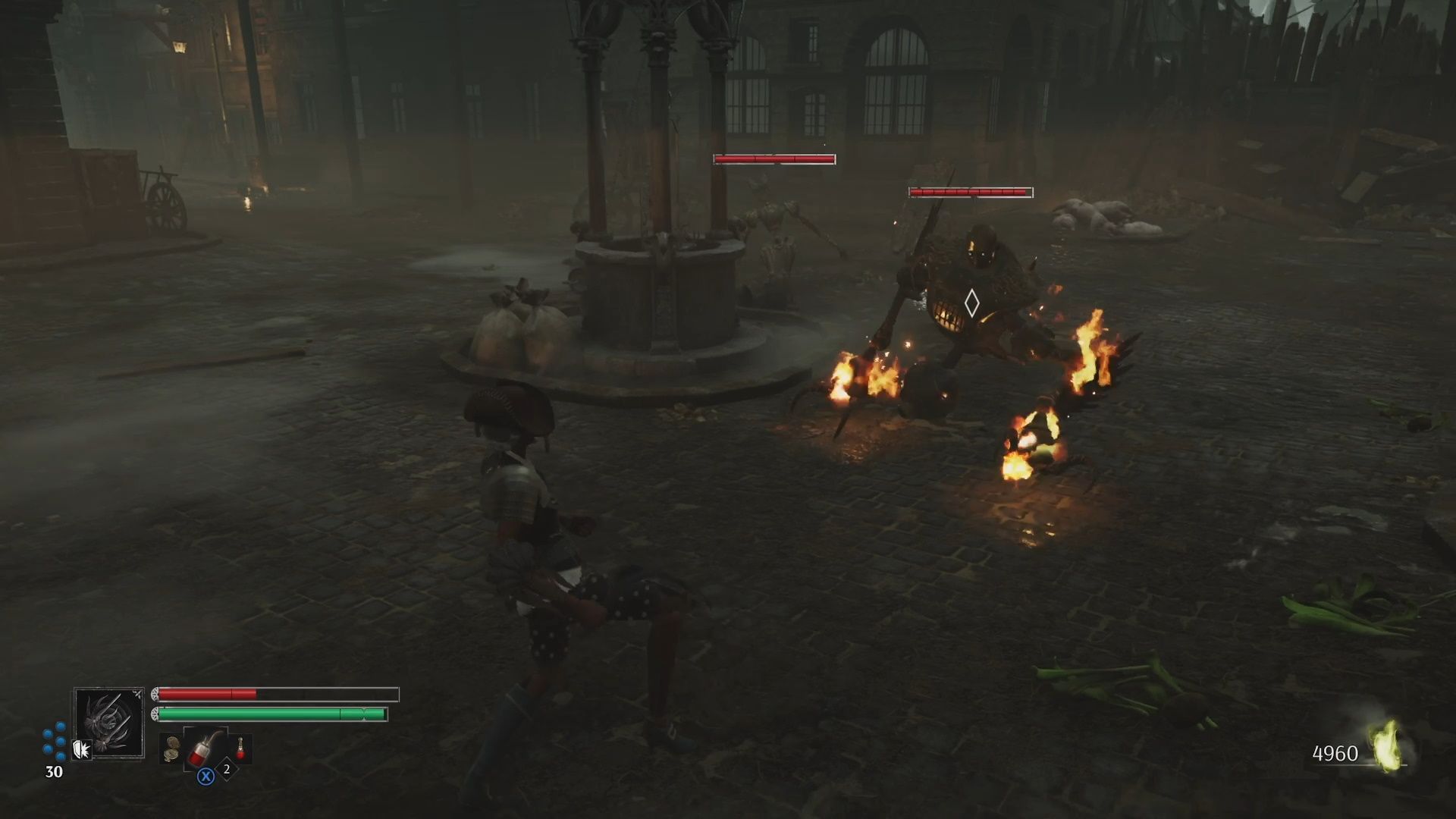 Once you clear out the Automats, look around until you see a structure with some debris beside it. Now, climb up on top of the structure, this will lead to a crude bridge made of planks. Follow the bridge, climb atop the balconies, and enter into the apartment up above. 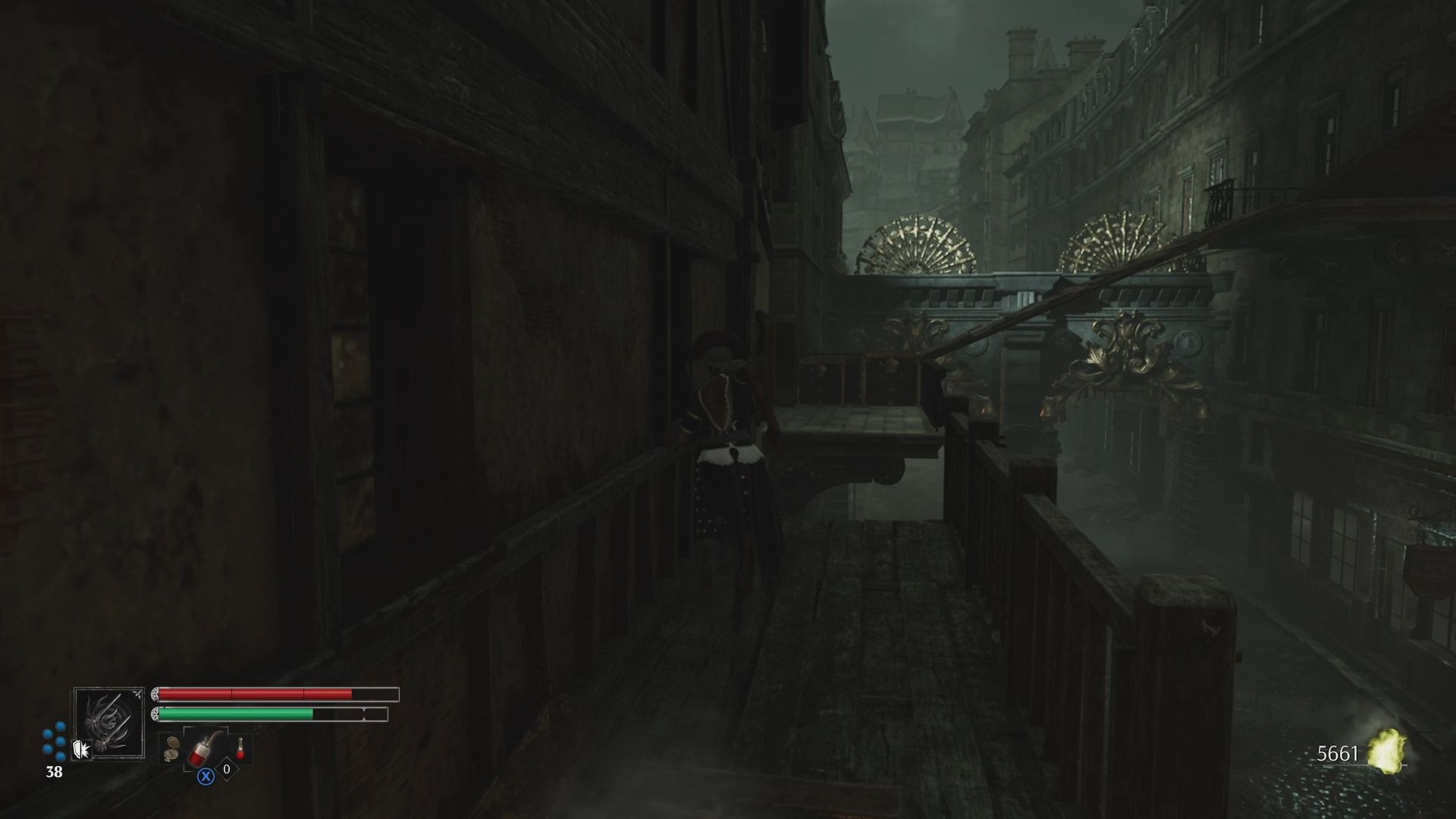 You will talk to Julien Raimond. He will tell you to seek out the Bishop. Now, leave the apartment by way of the balcony, and follow it around until you enter Quartier de Sainte-Opportune. 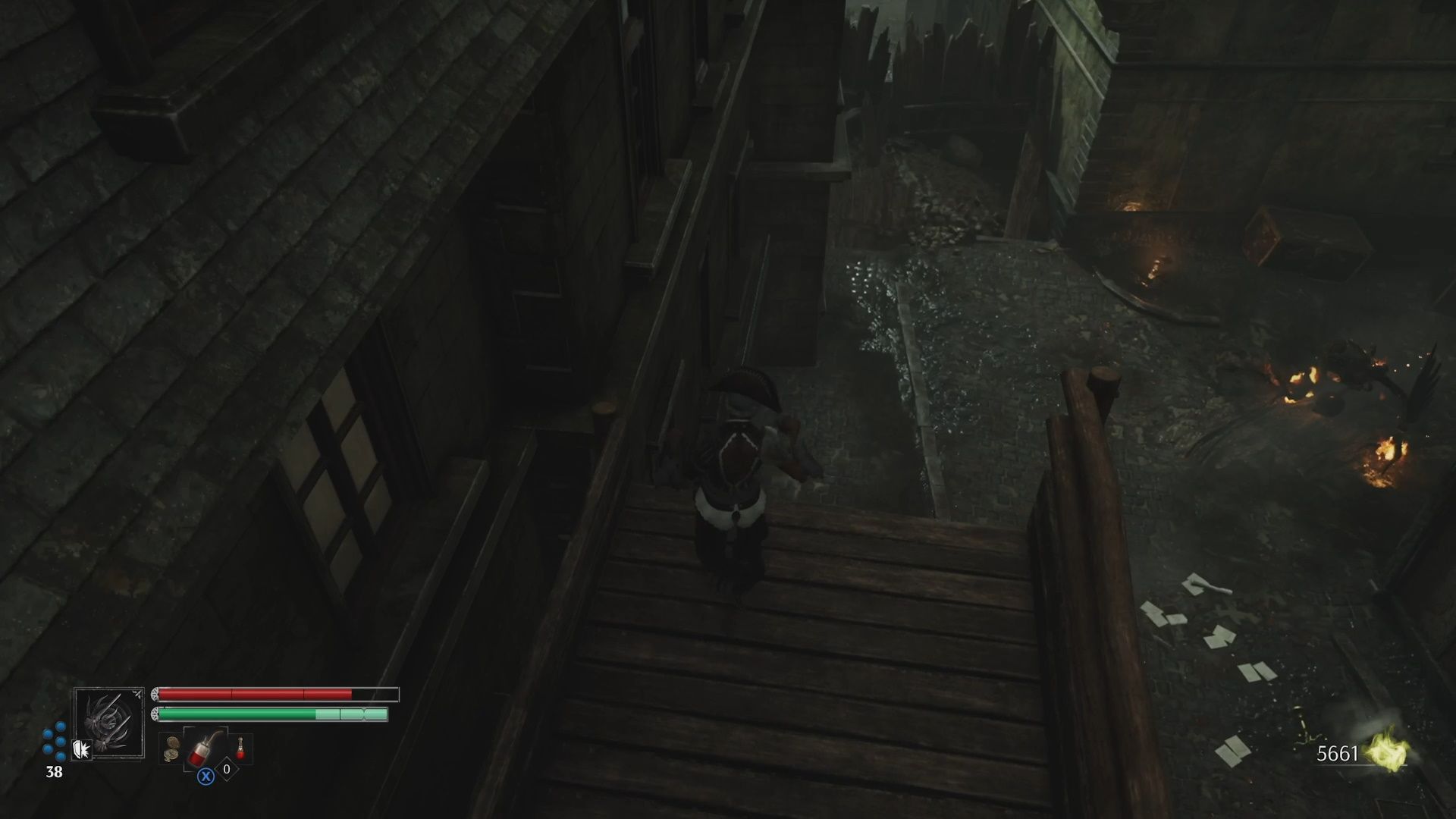 Right around the corner from the chest, you will encounter your first Forger in the wild. Yes, the boss from Les Invalides will now be popping up as a regular enemy. Thankfully, they are a little less resilient in their non-boss form. Watch out when you fight this one, as there is a Lancer further down the street who will fire their cannon at you as you battle the hulking brute. 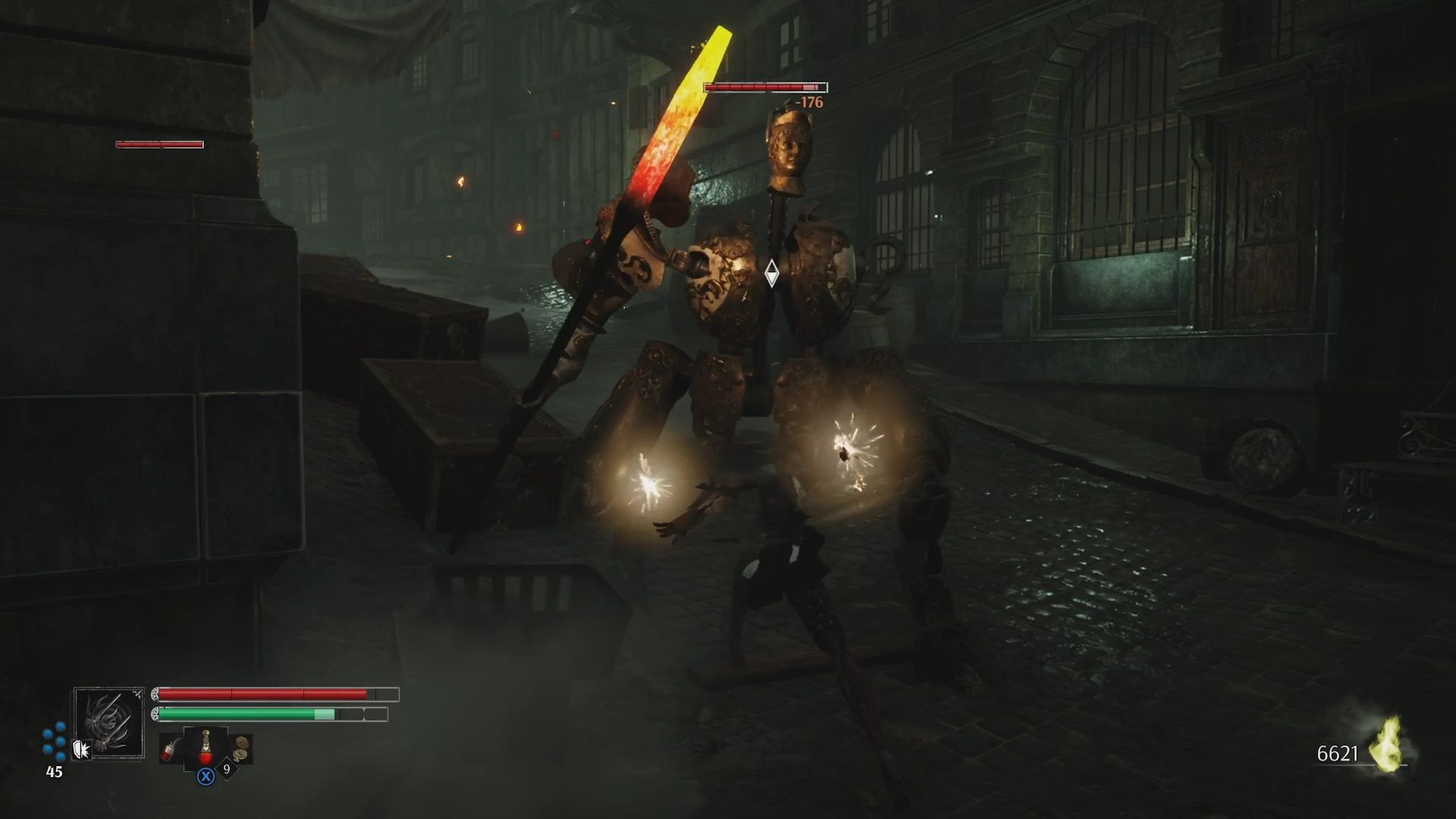 Once you clear the two of them out, you will find a passage close to where the Lancer was positioned. The passage will take you to a small courtyard that has another Lancer and two Combustible Panthers. Clear them out, open the gate, and climb the structure that is next to the gate. It will lead you through an apartment, and across a number of balconies. Eventually, you will find yourself in another courtyard. Drop down along the different structures until you are on the ground floor again. Now, clear out the Fencer and the Lunger that are huddled around the tree. 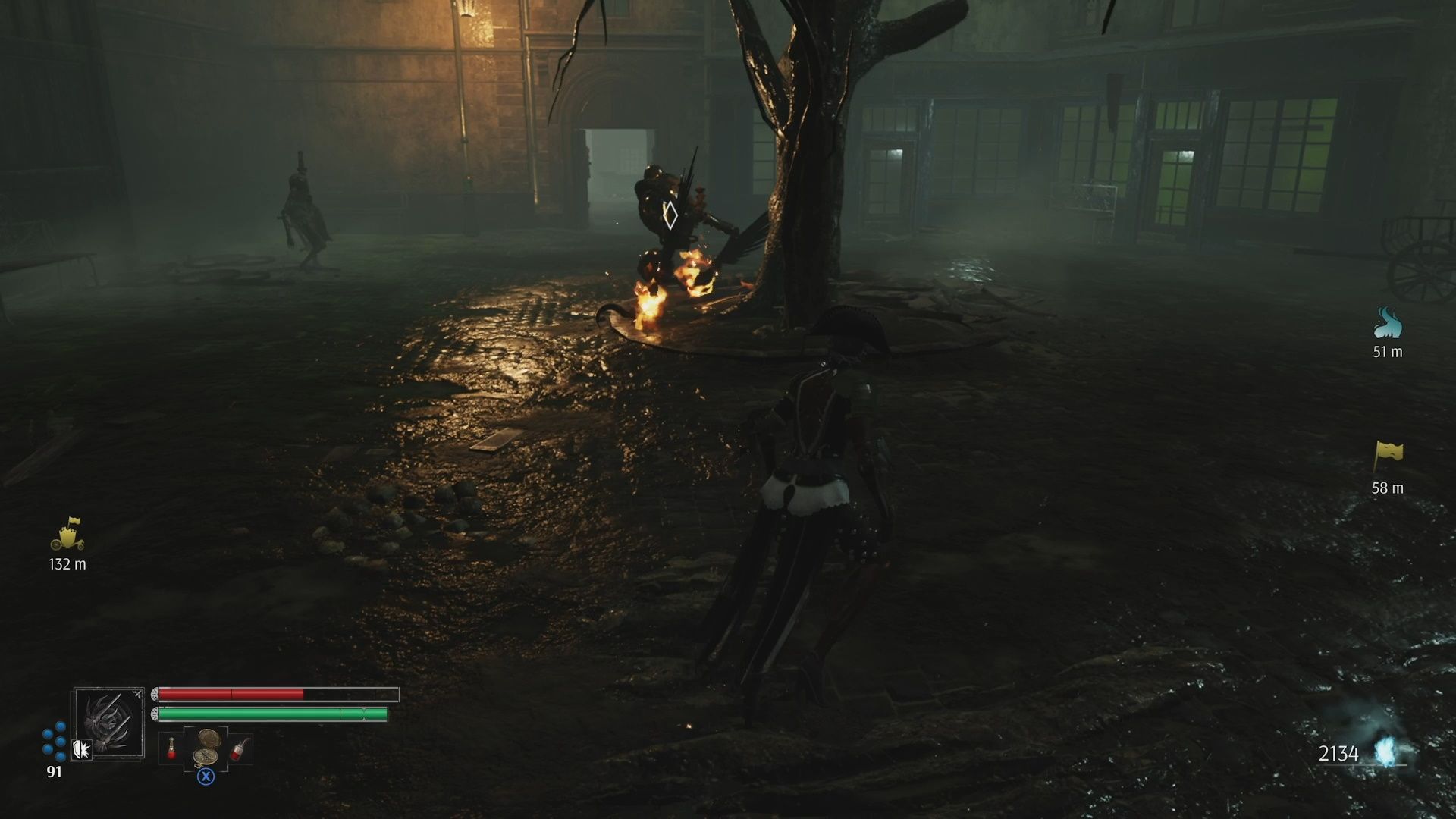 Exit that courtyard, and follow the path. Once you turn the corner with the raging fire, you will find yourself on a long stretch of road with a Fencer, an Axe-Wielding Automat, and on the other end a Lancer who is shooting at you. Draw the fencer back around the corner and take them out. Then zigzag your way to the Lancer and deal with them next. Finally, finish off the lowly Axe-Wielder. Now, climb up the ramp, jump over the wall, and you will witness a cutscene. Now, go activate the Vestal, and unlock the gate (it will take you to the Forger Automat). 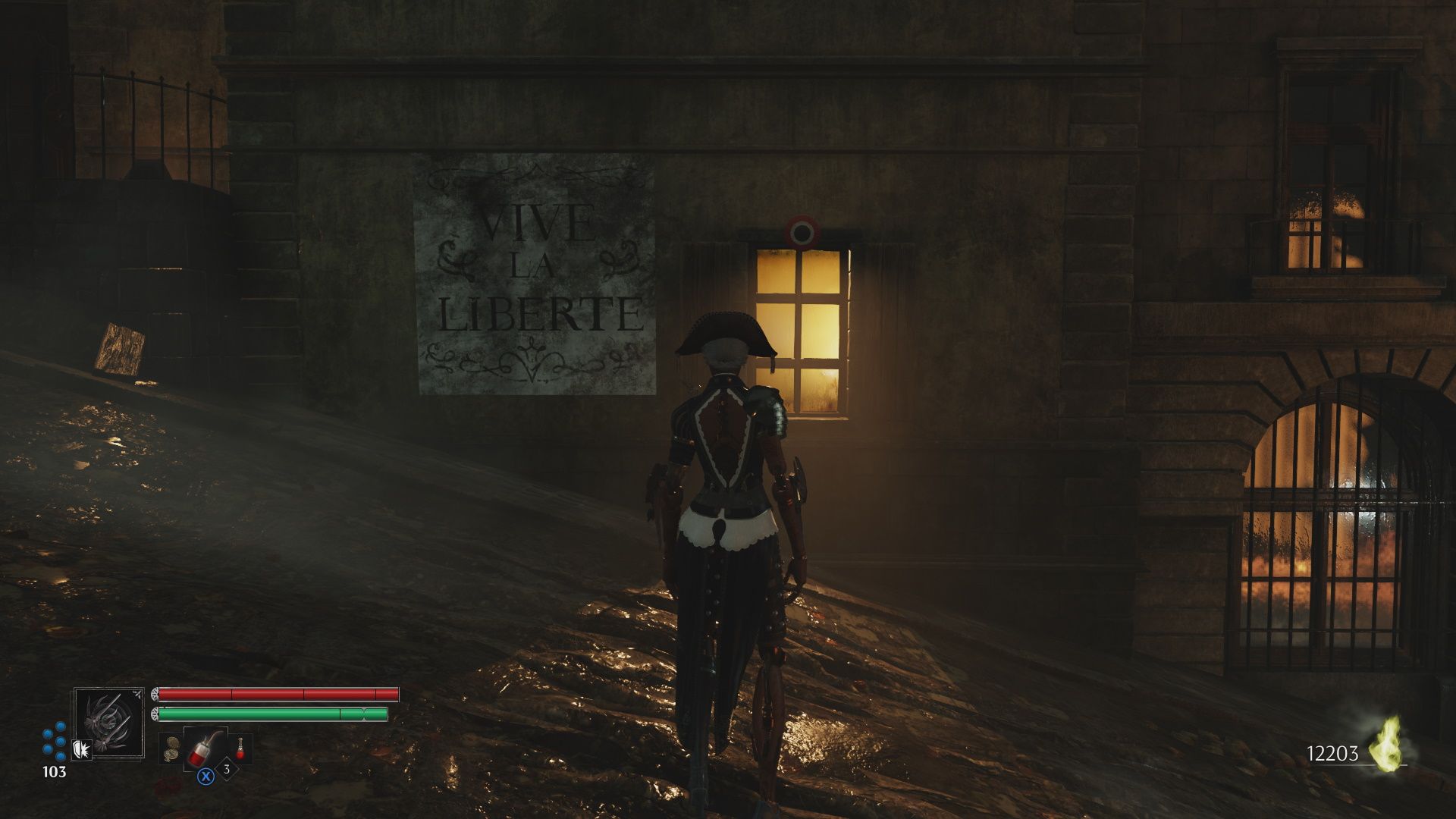 It is also worth noting that there is a Civilian Sidequest in this area. In one of the houses on your way to the gate, a woman will talk to you. She will ask you to find her son. Keep talking to her until you exhaust all the dialogue options. You won't be able to complete this sidequest until you defeat The Bishop of the Cite. 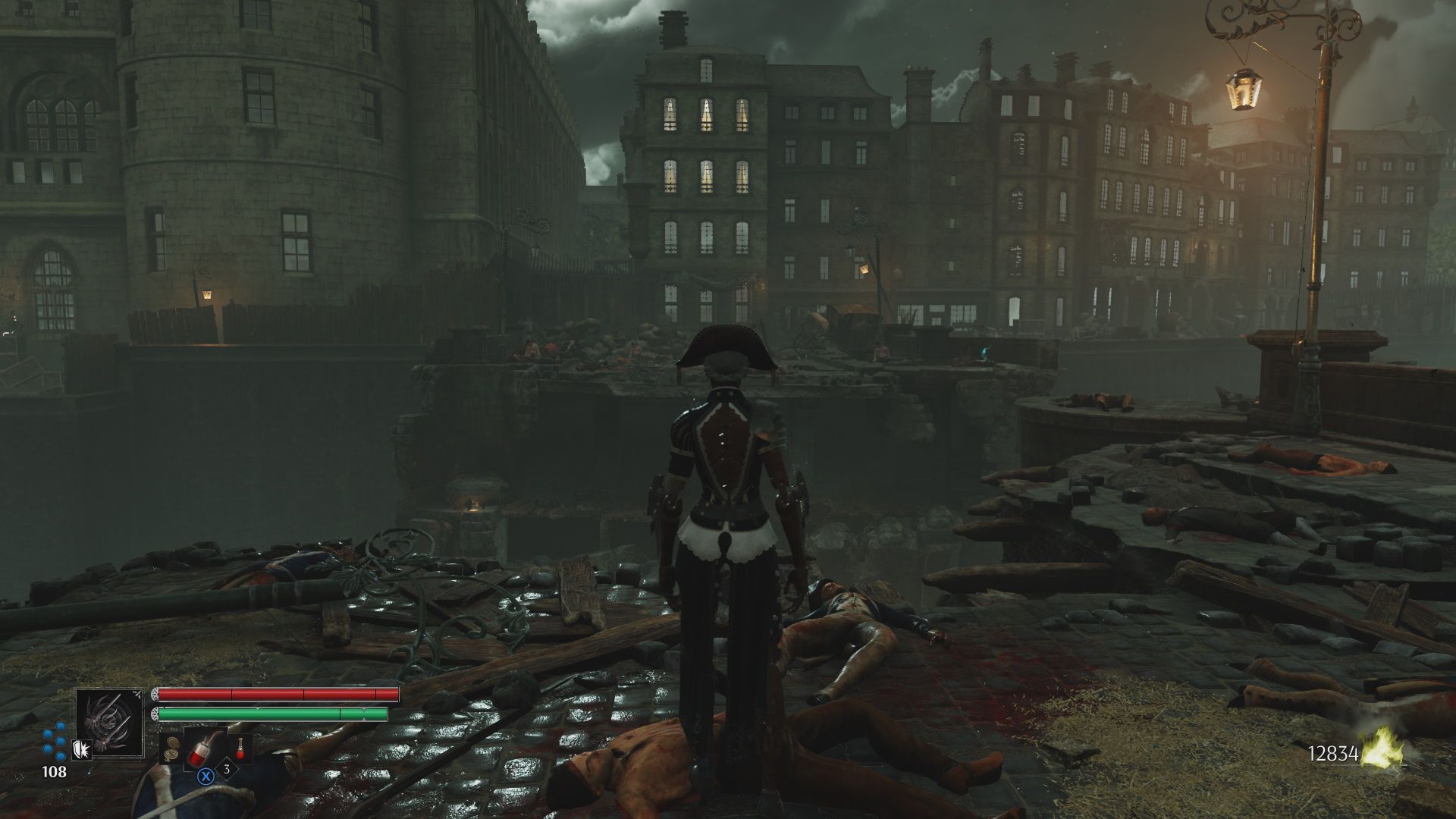 Now, go to the broken down bridge, drop down and grab the Lavoisier Sublimator from the chest. Now drop down to the pier below, hop across the boats, and go take out the Forger Automat. Don't climb the stairs yet, instead go under the bridge. To your right, there will be a Snake-Bodied Automat hiding behind debris. Take them out and then open the chest to grab the Grade 1 Unstable Essence Module and Module Key. Now backtrack and go up those stairs. 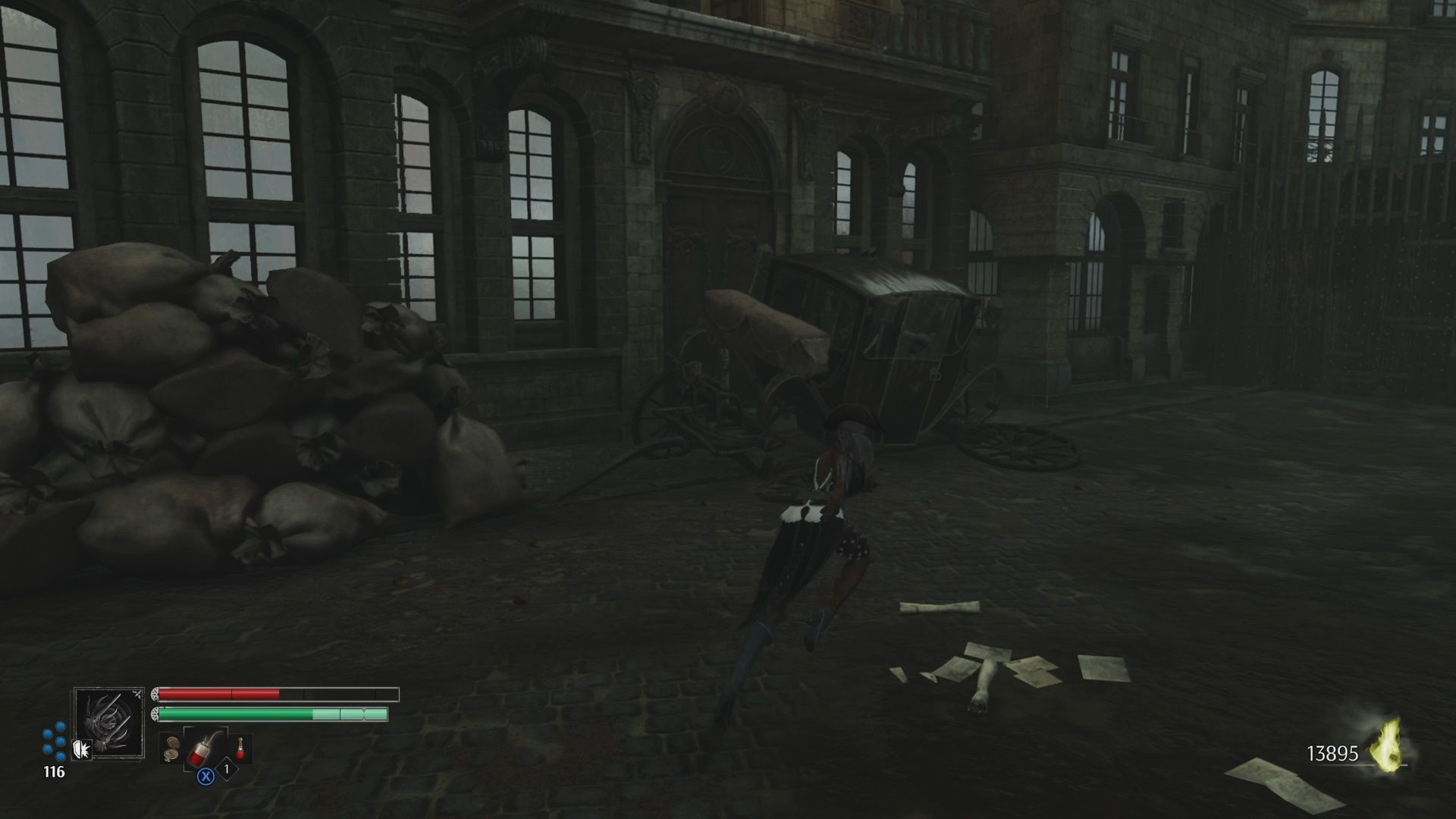 Take out the Lunging Automat and the Lancer. Now, look for a carriage with a balcony above it, Hop onto the carriage, enter the apartment, and hop down into the domain of the Unstable Butcher. 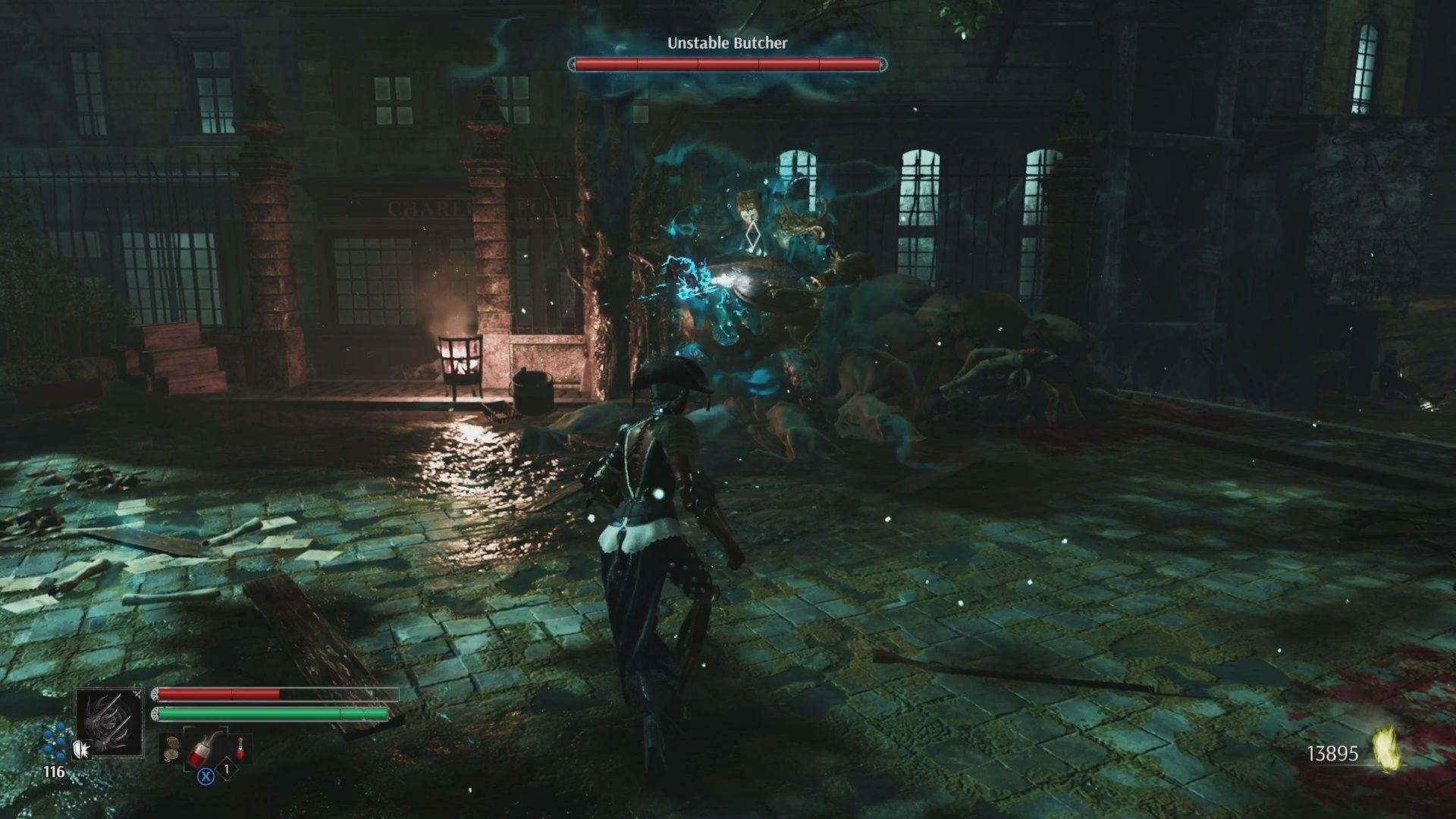 When fighting the Unstable Butcher there are only a few things you really need to look for. For starters, if it crosses its arms and stands still for a moment or so, it is about the charge forward. This is the only way the Unstable Butcher will be able to close the distance. Otherwise, this is a pretty lumbering boss. The other thing you need to look for is its buzzsaw attack. When the Butcher starts using this attack, if you aren't behind it already, get some distance. The sparks will hit you and set you on fire! Also, and this is important, never use a charging move while they are doing their buzzsaw attack. You will now blow through it, you will be torn to pieces by the saw, and will likely die. Respect the buzzsaw! 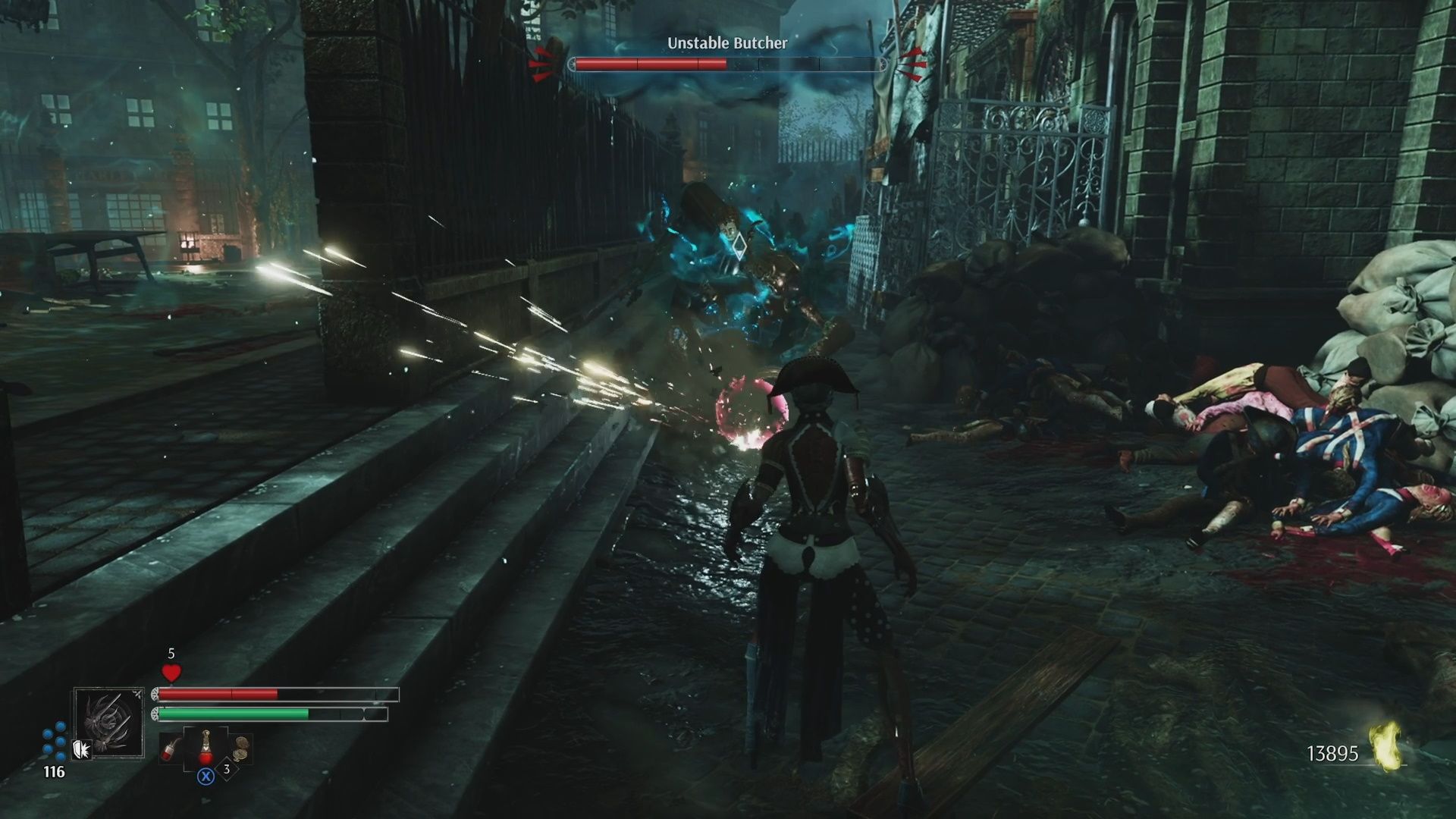 Now, other than that, the Unstable Butcher is just takes giant hacks that hit for a lot of damage if they connect. Your shield won't be particularly useful here, as many of these swings are incredibly heavy. Instead, you are going to watch to dodge through them and attack his back. If the Butcher lifts its arm into the air, the next attack will be a vertical slash, and if they move their arm to the side, it will be a sweeping horizontal slash. A fully charged halberd or hammer strike will put this boss on their butt. Just keep attacking their back, and you will be fine. 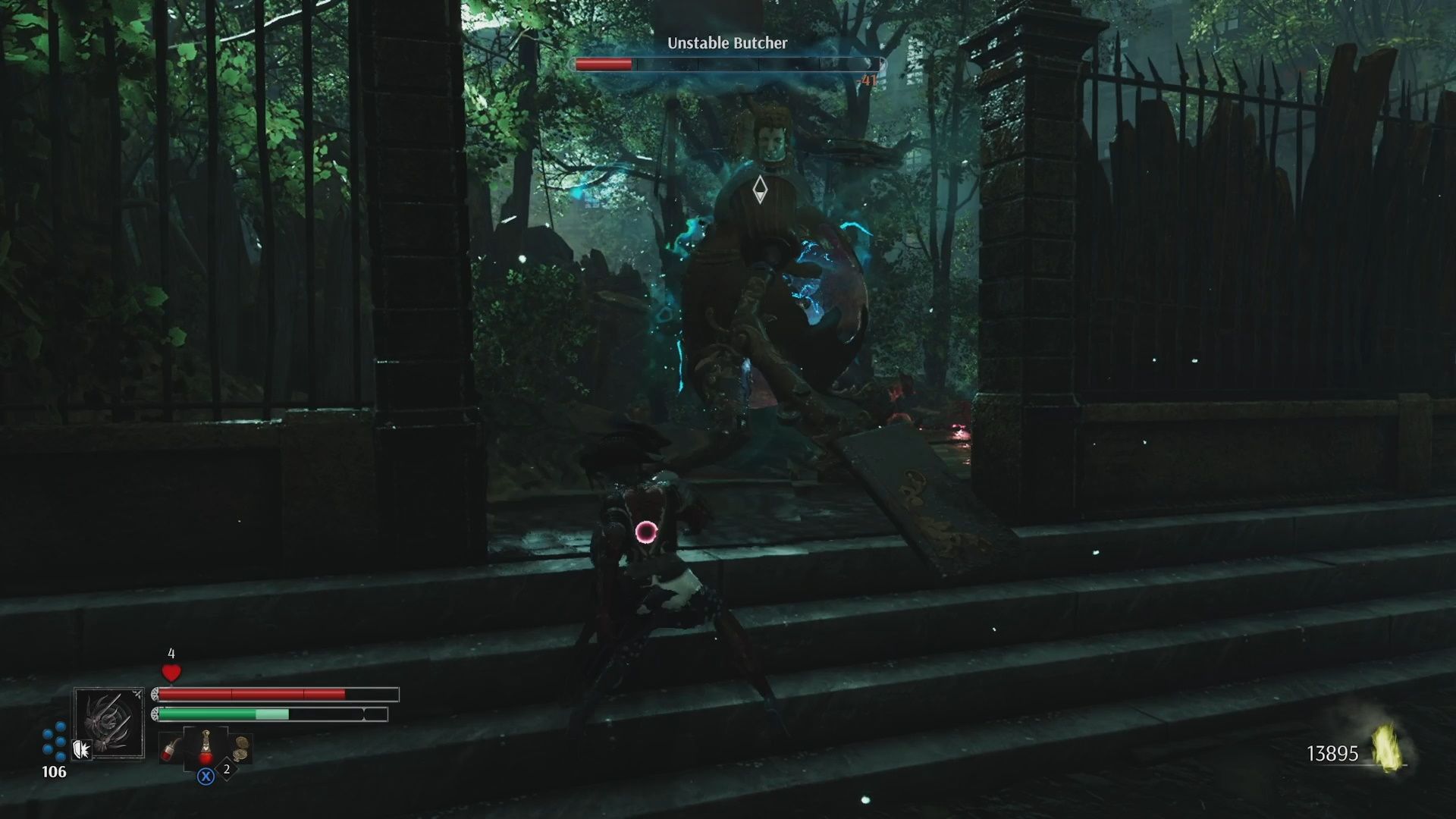 And, of course, just in case you were wondering. The cheesy method for beating the Unstable Butcher is to shoot them with your Shielded Musket, then, when they are frozen, smash them with a fully charged attack. Rinse and repeat until they are dead 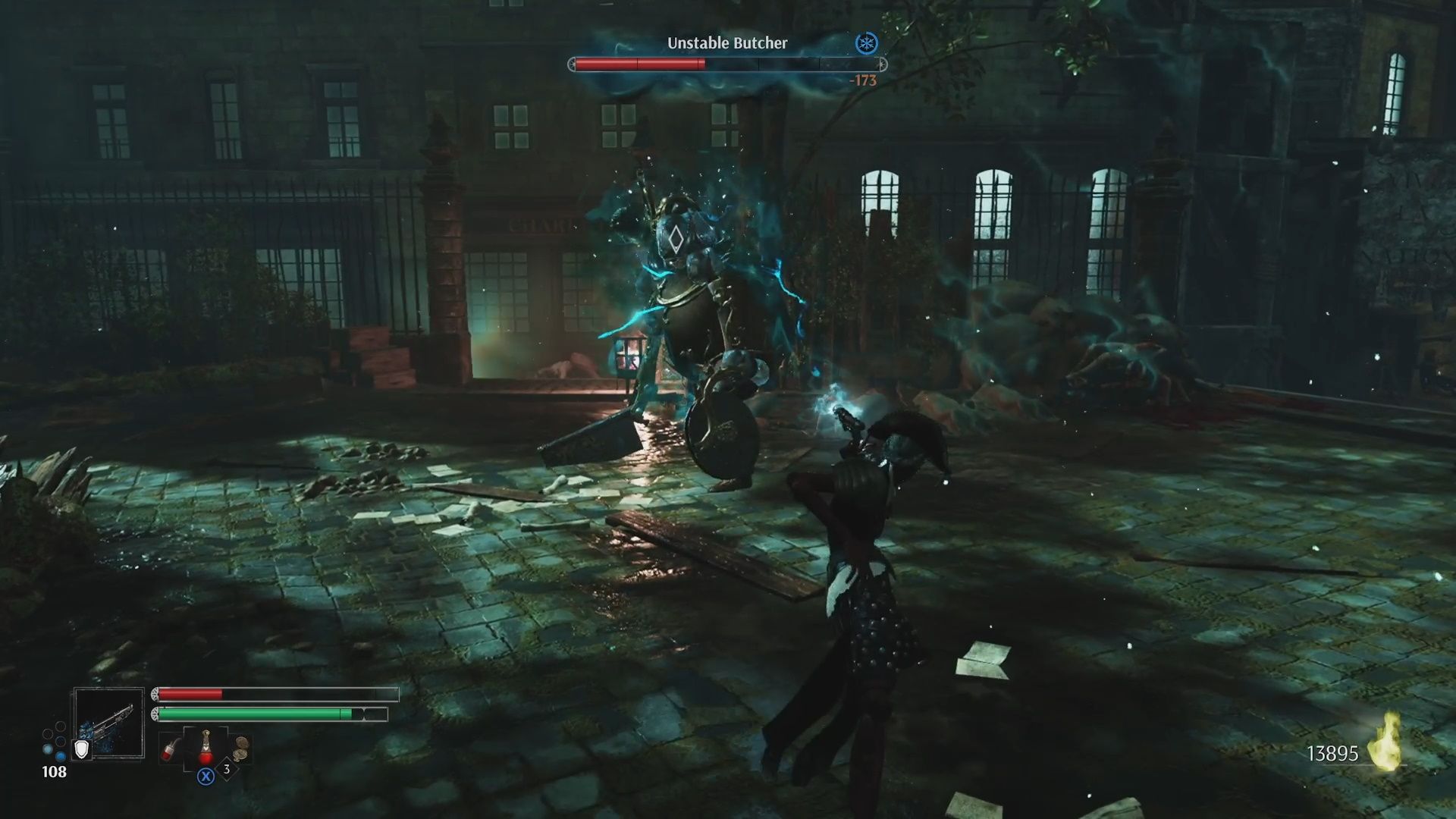 Once you beat the Unstable Butcher you will get the Grade 1 Reinforced Armour Module and a Module Key. There is a treasure chest nearby that holds the Citizens Top Hat and Carmagnole. The other chest is will be locked (for now). Also, you can climb up to an apartment above to get the Hephaestus Batons and the Grade 2 Swiftness Module from a chest. 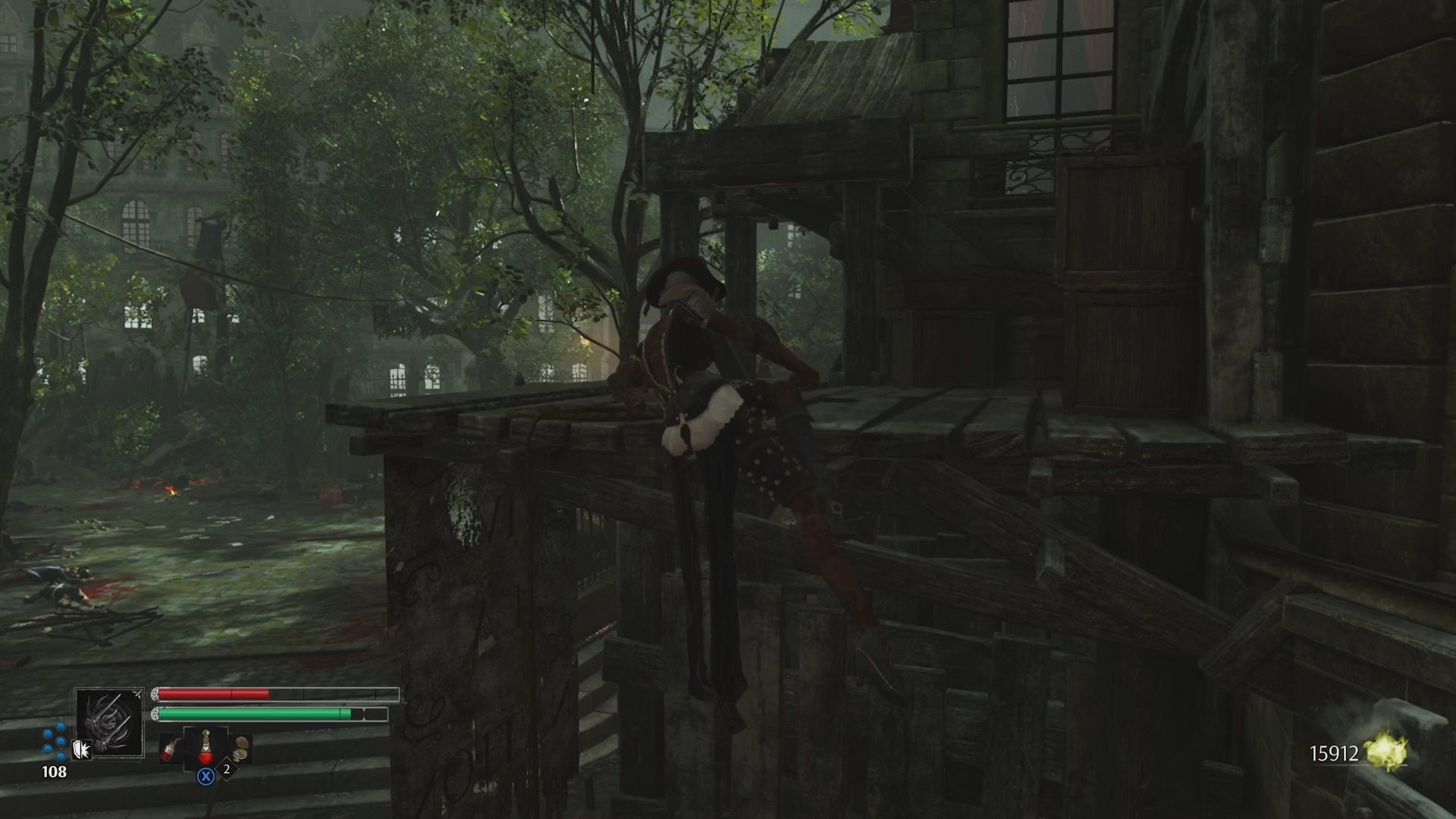 Now, leave this place, and head toward the water. You will find yourself on the Banks of the Siene. From here, fight the Fencer Automat, climb up the stairs, take out the Lancer and the Forger Automats, and then activate the Vestal located nearby. It is time to prepare yourself for your battle with the first Titan: The Bishop of the Cite.