Home » News » Sure, You’re Cool, But Are You "Cyberpunk 2077 NPC Who Smokes His Gun Like A Cigarette" Cool?

Sure, You’re Cool, But Are You "Cyberpunk 2077 NPC Who Smokes His Gun Like A Cigarette" Cool? 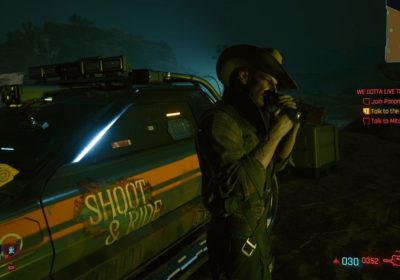 You’re in Cyberpunk 2077, wandering through Night City. All of a sudden somebody stops you dead in your tracks. “Want a smoke?” they say. “Here, take one.”

You don’t smoke, but this guy means business. Better to just say yes and keep walking – you can throw it in the bin if you like. “Sure, I’ll have one,” you begin to say. “Thanks.”

Without a moment’s hesitation, the man in front of you reaches into his pocket and draws a loaded gun. Was this some kind of setup? Is he going to shoot you? What are you supposed to do? “Here, just take my money, I’m sor-“

Hold on a minute – is he… is he lighting his gun like a cigarette?

“Hmph,” the strange man grunts. “I’m a believe in old ways and legacy tech. I can’t tell ya why, but I don’t quite trust chrome.”

Mate! You’re taking a drag of a metal gun!

“The trick is to hear silence in your mind at the bang.” The trick to what? Again, pal, you’re toking on a literal firearm. I don’t think you’re in a position to be teaching people about life hacks.

Don’t get me wrong, smoking isn’t cool. Guns aren’t cool either. But smoking a gun? Come on, surely that ranks pretty high on the badass scale. How does it even work? Does he load pipe tobacco into the chamber instead of bullets? Would that not just cause said pipe tobacco to coagulate into a bullet-shaped projectile once the standard amount of firing pressure is applied? This guy lives life on the edge.

For what it’s worth, yes I am aware that this is a bug. I obviously don’t think this guy was scripted to be someone who smokes guns. That doesn’t take away from the fact that it’s funny, especially when you consider the context of a firearm-toker trying to give you advice. “These are the old ways,” he says. “This is what we all used to smoke before Big Chrome crept in.”

Sounds good, mate. Now could I grab an actual smoke off you please?

Next: Pokemon Was Better When None Of It Made Sense