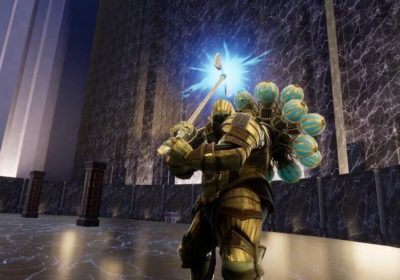 Thirdverse Inc’s virtual reality (VR) title Swords of Gargantua was built around the premise of recreating sword fighting with great accuracy, weapons that display weight and so on. Which makes for an engaging yet brutal gameplay experience. So next year the studio plans on releasing a new, more casual, sword fighting title a new interview reveals.

Speaking to Famitsu – spotted by Siliconera – Thirdverse Inc. game producer Teryuki Toriyama confirmed that the team is working on a new VR action videogame with sword fighting as its central mechanic. “We plan to launch a new sword fighting VR action game in early 2022. Compared to Swords of Gargantua, it will be aimed more towards casual players,” he said.

It’s not clear whether this will be an entirely new IP or still be based within the Sword of Gargantua universe. One thing is clear, the studio wants the new title to be more accessible; allowing players to become that unstoppable hero without it feeling like a workout.

Whilst still early in development Thirdverse Inc. has mentioned another project, a multiplayer shooter. Revealing a single location image, showing what looks like a temple structure floating in the sky, the layout mixes both fantasy and sci-fi aesthetics for a visually dynamic environment. The Famitsu article also showcases a cybernetic character design that doesn’t quite fit with the location look but does suggest an overpowered, action element.

While no platforms have yet been confirmed, Toriyama gave an interesting quote when discussing VR hardware hurdles, saying: “The Oculus Quest 2, which solved many problems, left an impact on me.” So it’s a safe bet that the popular standalone headset will get a look in with at least one of these games.

The Japanese studio has been expanding its presence in 2021 announcing a new funding round of $8.5 million USD last month, putting its total up to $20 million. Thirdverse Inc. continues to support Sword of Gargantua and as further updates and new project details are revealed, VRFocus will let you know.