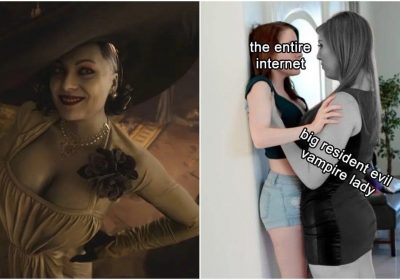 Resident Evil Village does not come out until May 7, 2021. However, a certain character revealed from the game has taken the Internet’s attention by storm. That character is Lady Dimitrescu, a both beautiful and frightening, nine-foot-tall mutant.

What is known about her so far (other than her height) is that she is a countess that controls a fortress called Castle Dimitrescu. She is the matriarch of a family that has controlled the castle since Medieval times.  Lady Dimitrescu lives with three other women who she considers to be her daughters. Her backstory is a mystery, but fans do know already that she can elongate her fingers into claws to kill her victims.

The world fell in love with her design and plenty of memes followed often referring to Lady Dimitrescu’s height, beauty, and magnetism. 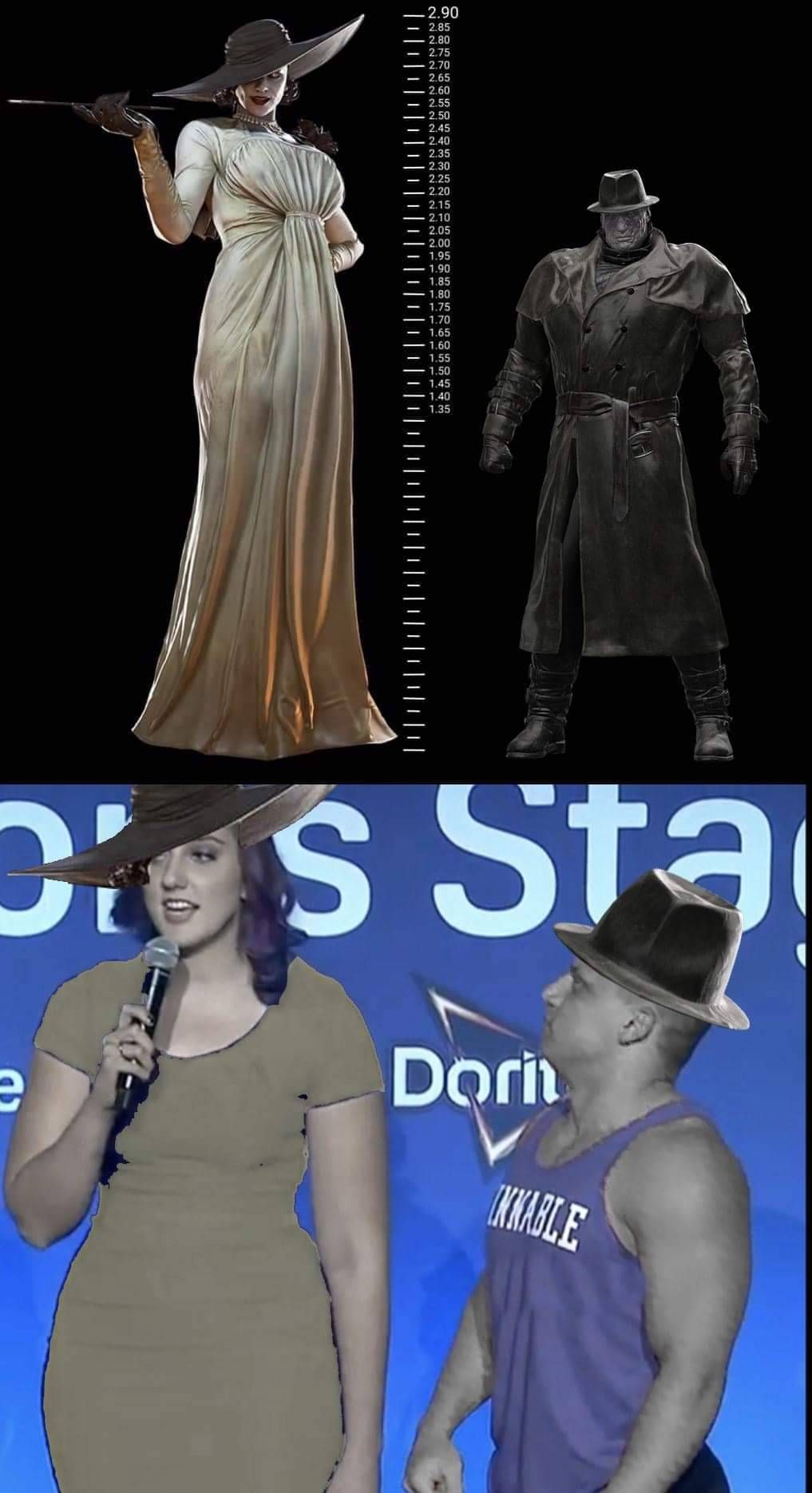 Mr. X is an intimidating figure from Resident Evil 2. He cannot be killed and chases the player with inhuman strength and determination. Players quickly looked up his height and compared it to Lady Dimitrescu and found that she makes Mr. X look like a child.

That is a big deal considering the fact that Mr. X appears large and menacing in Resident Evil 2. By height comparison, it looks like Lady Dimitrescu could pick him up and throw him across a room easily. 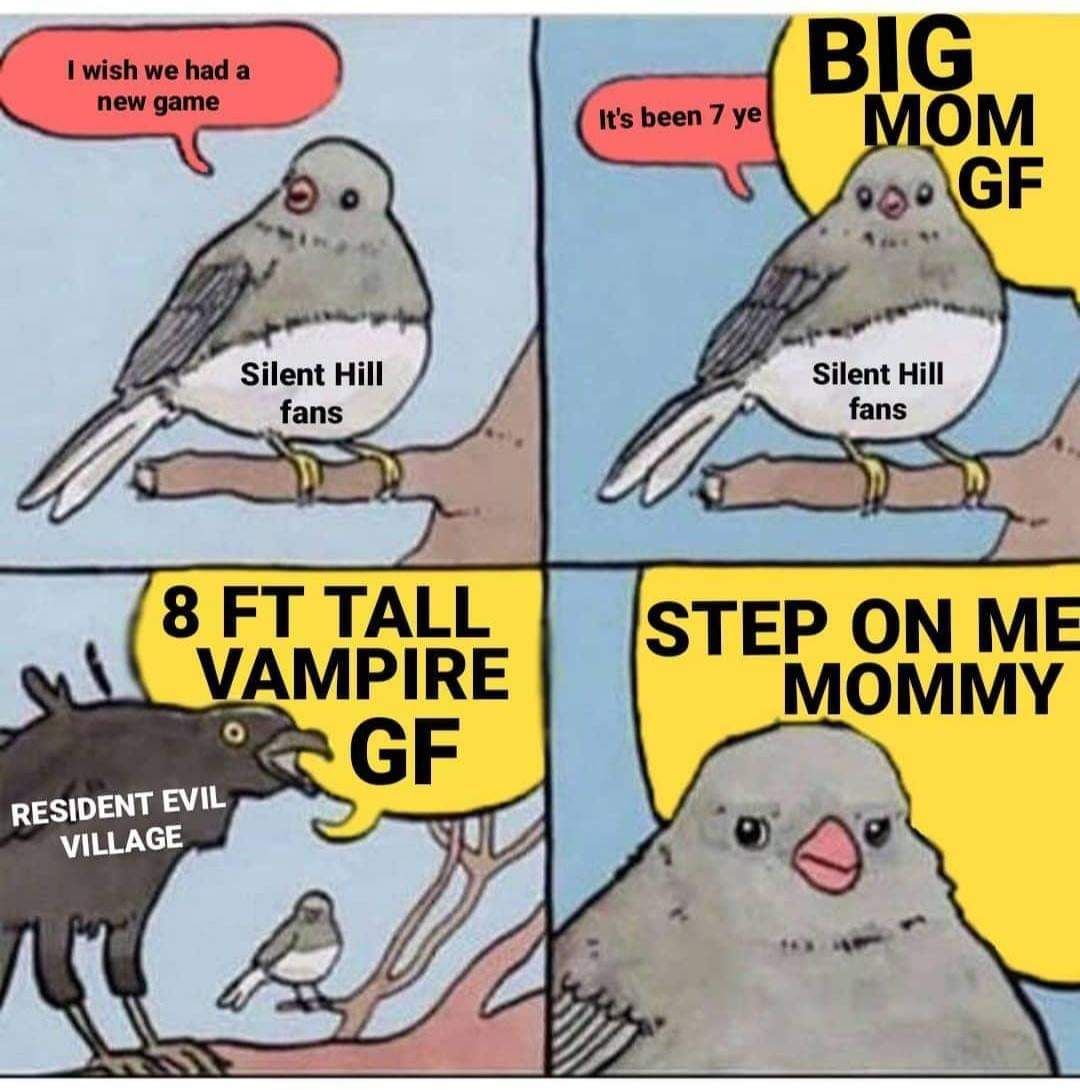 Of course, Lady Dimitrescu has fans who are attracted to her. That is a big reason why there are so many memes about her. In a sense, her popularity has overshadowed all else about the upcoming new game which can frustrate other fans.

One conversation spreading around is that Lady Dimitrescu will likely mutate into a hideous monster by the end of the game (like many bosses in the past games). However, many players have also joked that they will still find her attractive. 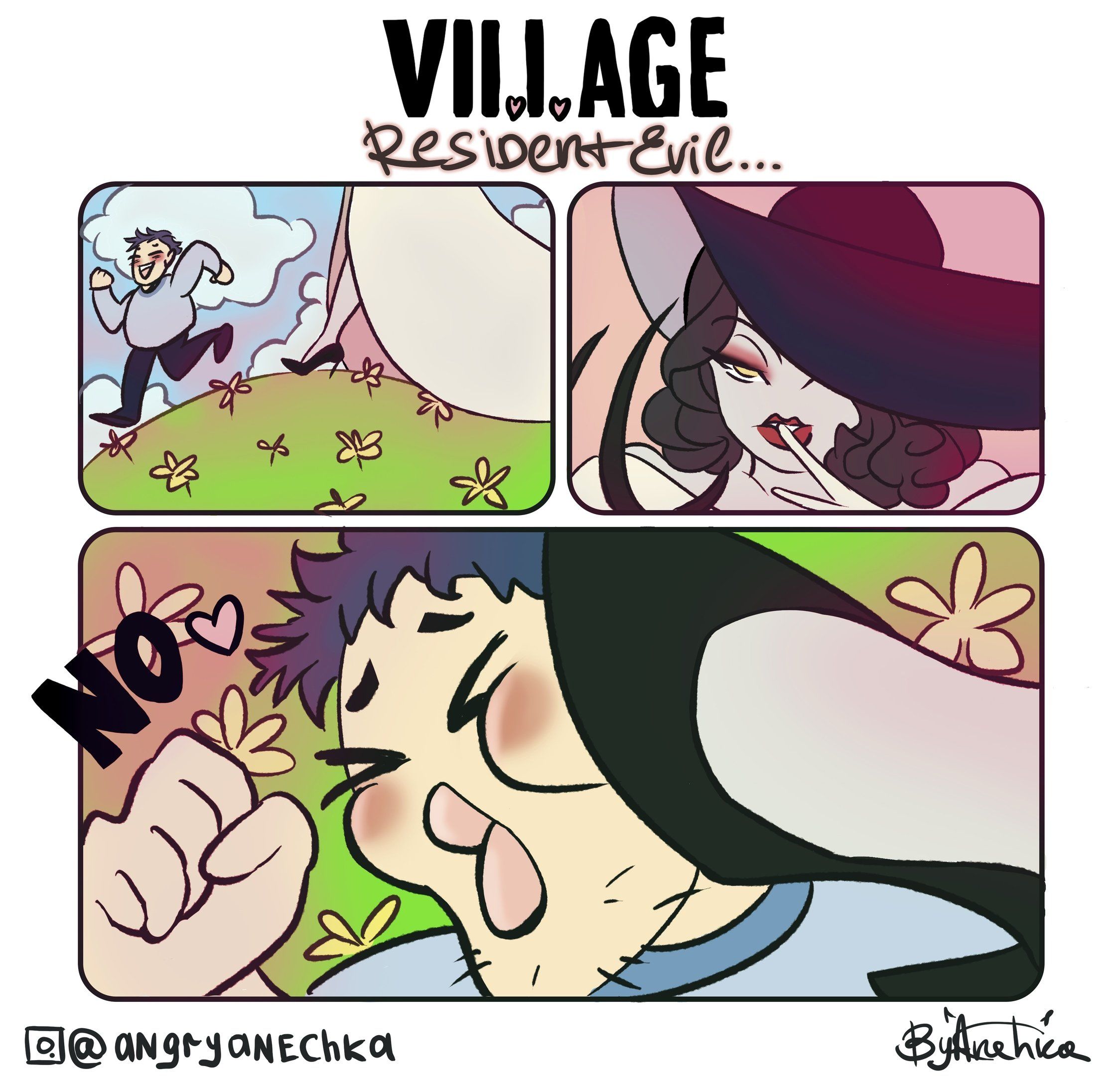 This funny comic, done by angryanechka, highlights the giddy feeling players have about Lady Dimitrescu hunting them down. The artist described their comic as “Every Resident Evil player after the Resident Evil Village trailer.”

Anyone who did not know better would not guess this comic was about a Resident Evil game. It looks like all flowers and sunshine instead of death, mutants, and jump scares. That’s just the magic of Lady Dimitrescu. 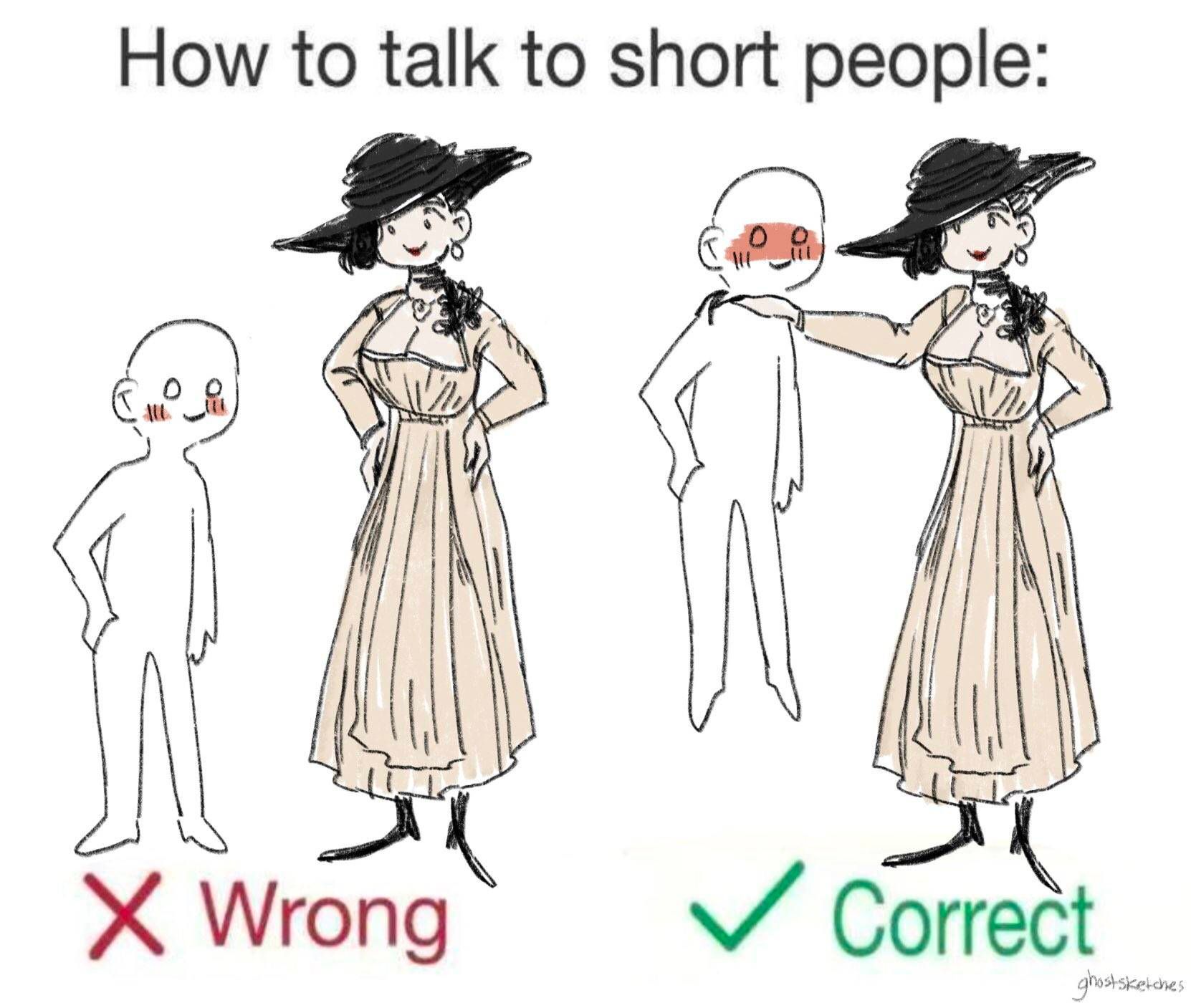 “How to talk to short people” is a meme comic with different goofy ways for a tall person to talk to a short person. This artist, ghostsketches, decided to take this meme and show it with the twist of Lady Dimitrescu.

What Lady Dimitrescu is doing is in reference to how she kills someone in the Resident Evil Village trailer. She just picks them up with one hand before impaling them with her transformed claw fingers. Of course, she does it with such style that no one seems to mind. 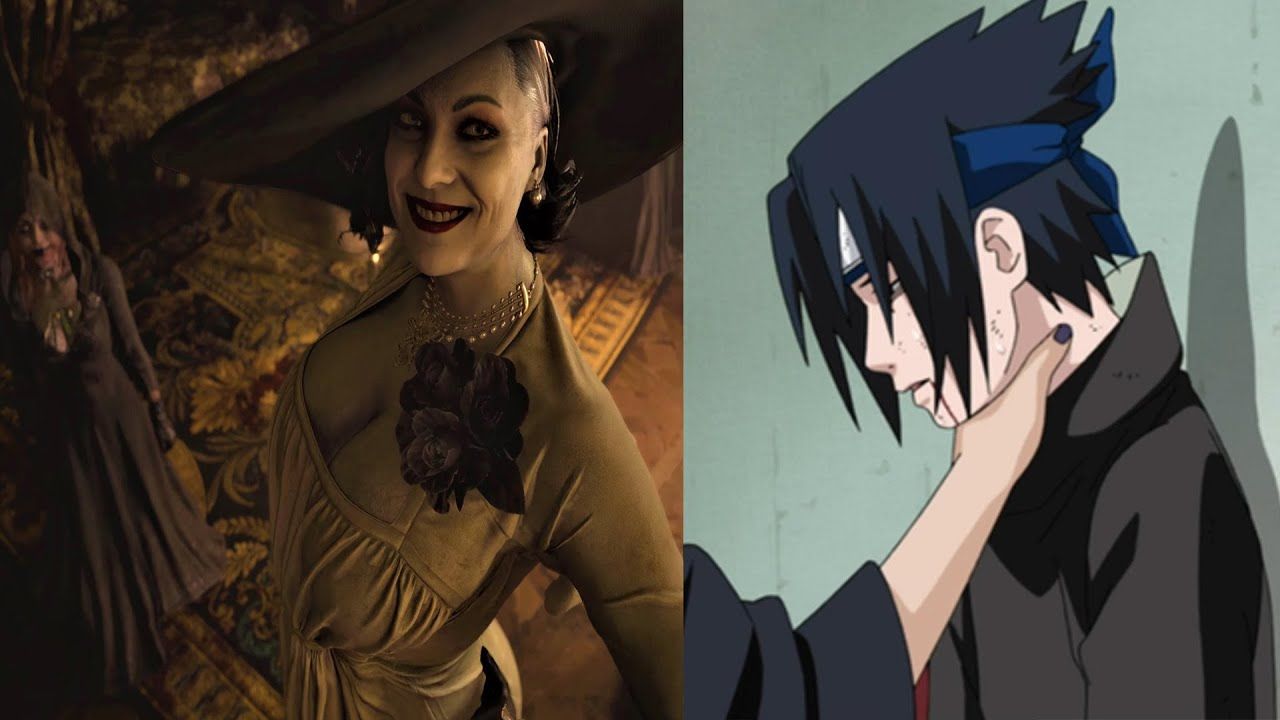 This meme template was bigger in 2019, but Lady Dimitrescu’s perspective shot and the image of Sasuke from Naruto are too perfect a meme to ignore.  The meme has now existed for about two years and meme creators are still finding everything under the sun that can choke Sasuke.

Originally, Sasuke is getting choked by Itachi but this template has him being choked by everything from cats to Shrek and Gordan Ramsey. It does pair well with the glee on Lady Dimitrescu’s face though, doesn’t it? 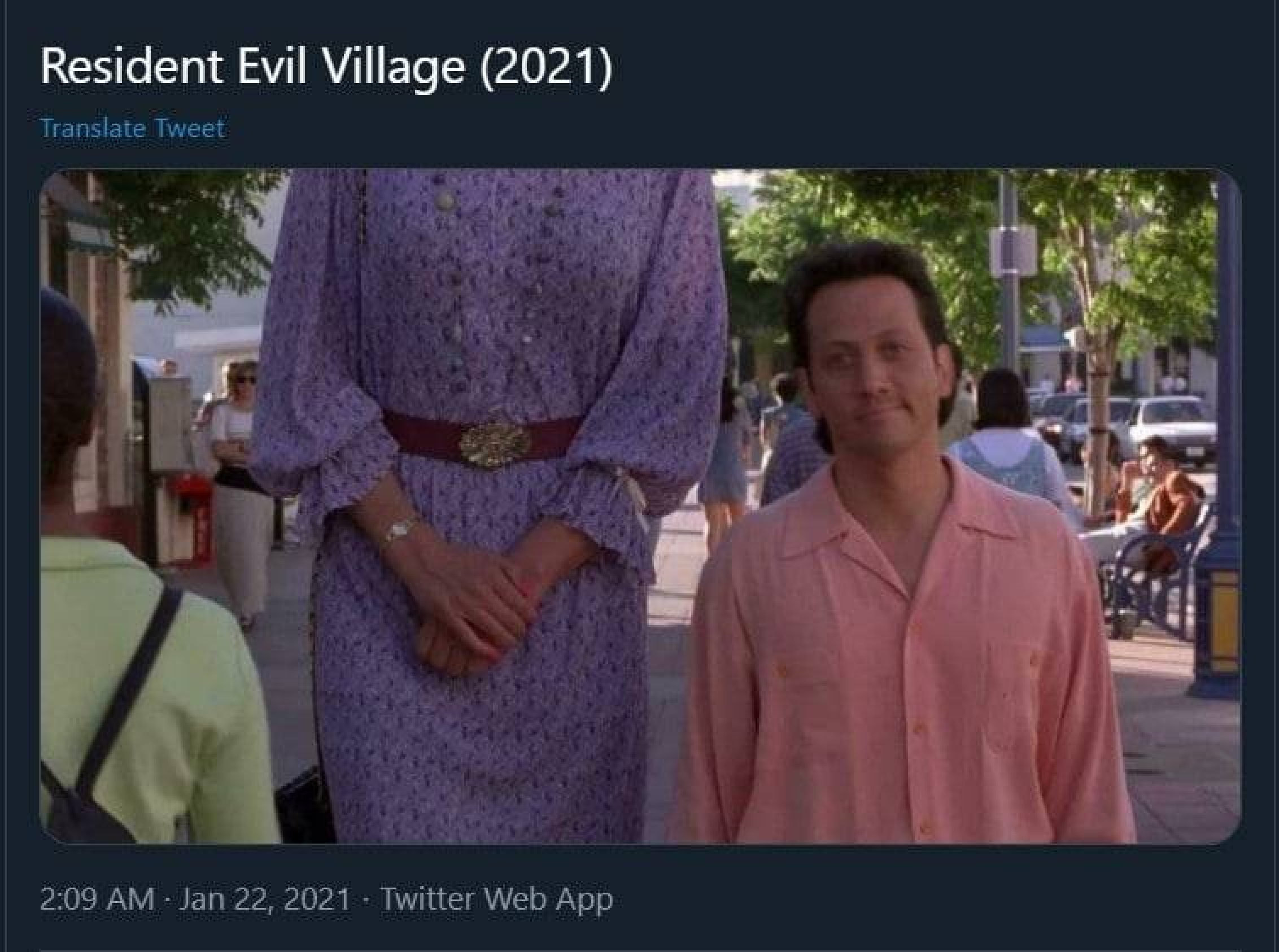 This image is from the 1999 comedy romance film Deuce Bigalow: Male Gigolo. The tall woman in the screenshot is Tina —  someone who is incredibly tall like Lady Dimitrescu. She even seems to have a strong sense of style just like Tall Vampire Lady.

The movie faded into obscurity a long time ago and only has about a five out of 10 score on IMDb. However, the moment Lady Dimitrescu was seen in the trailer, this movie became meme material. 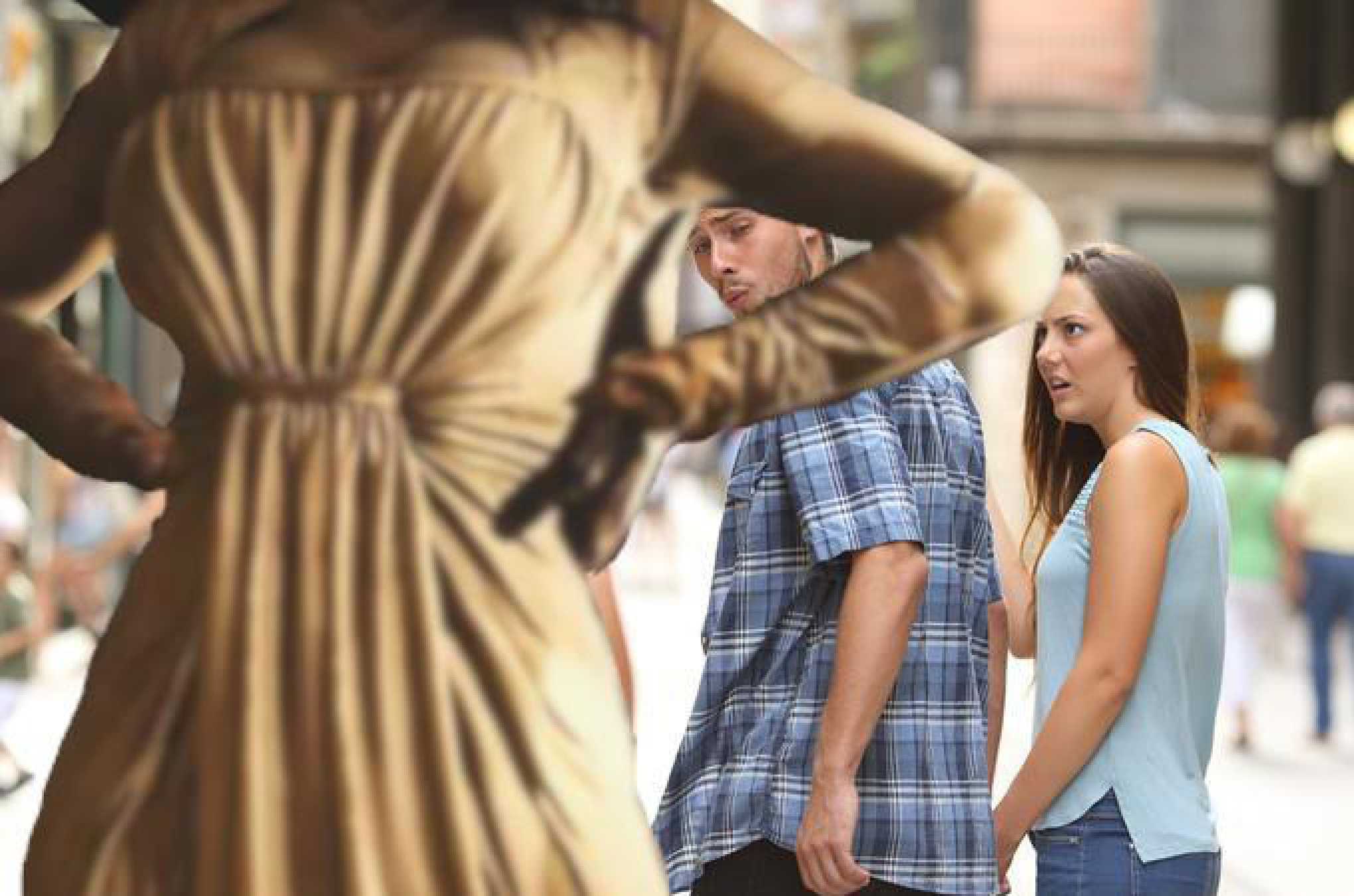 This meme has been well used since 2017, but it never gets old as people find new ways to keep it funny. The best part of this meme is that Lady Dimitrescu is so tall that only a part of her body is in the image.

The meme is called “distracted boyfriend” and he has been distracted by everything at this point. Sometimes the disapproving girlfriend’s image changes, too, to symbolize something but in this particular case, she works in the meme naturally. Of course, who’s to say that she might not also find herself distracted by Lady Dimitrescu? 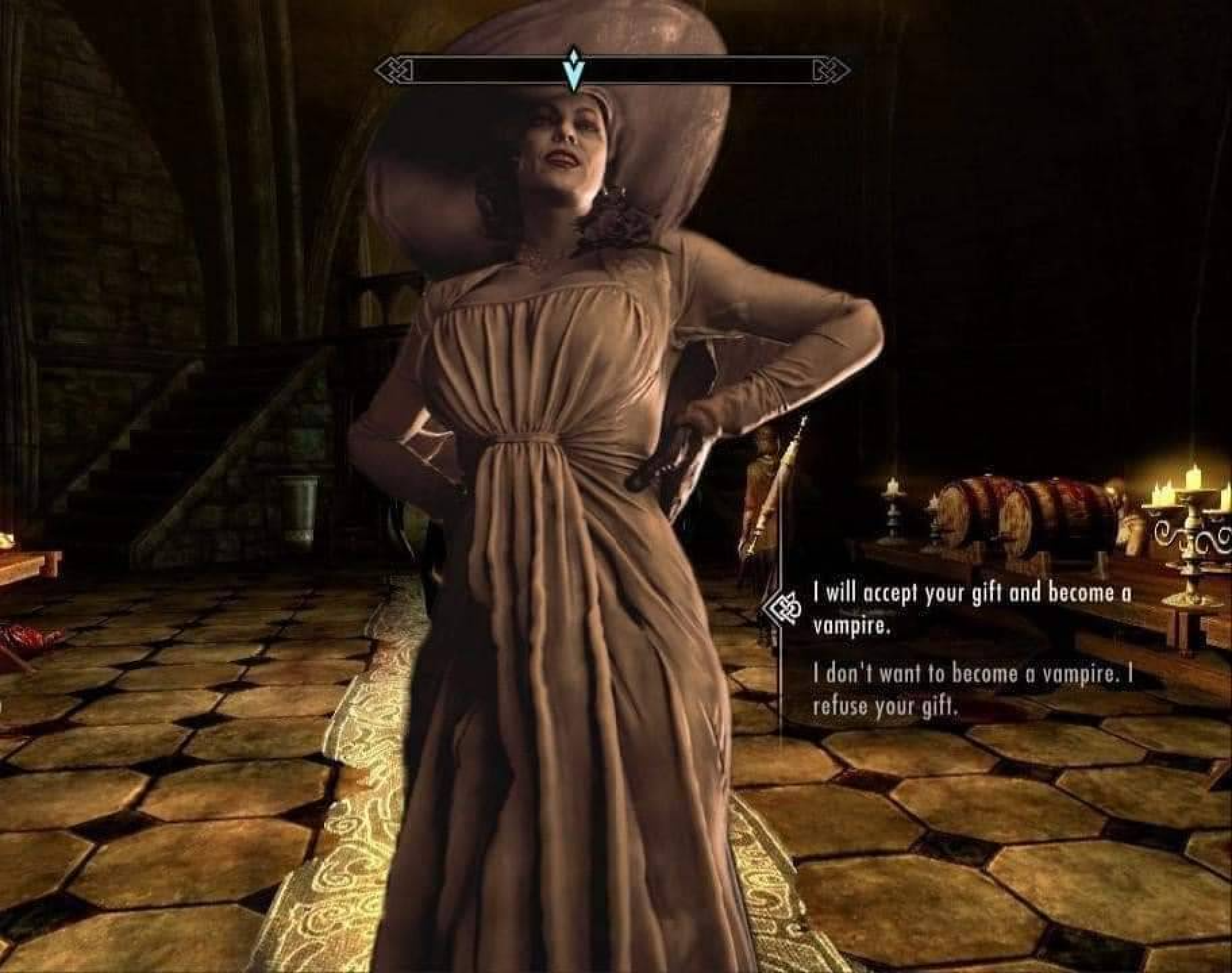 This edited screenshot is taken from The Elder Scrolls V: Skyrim where there is DLC that involves becoming a vampire.

Many players, due to their love of Lady Dimitrescu, wish that they could join her family rather than fight against it. As to whether Lady Dimitrescu is actually a vampire remains a little complicated since fans have little information to go on. She has a lot of vampire traits such as having a high-class role, being pale, and sticking to a close-knit family with some sort of power dynamic. While many fans have called her a vampire, she is not strictly known to be one despite her obvious vampire folklore inspiration. 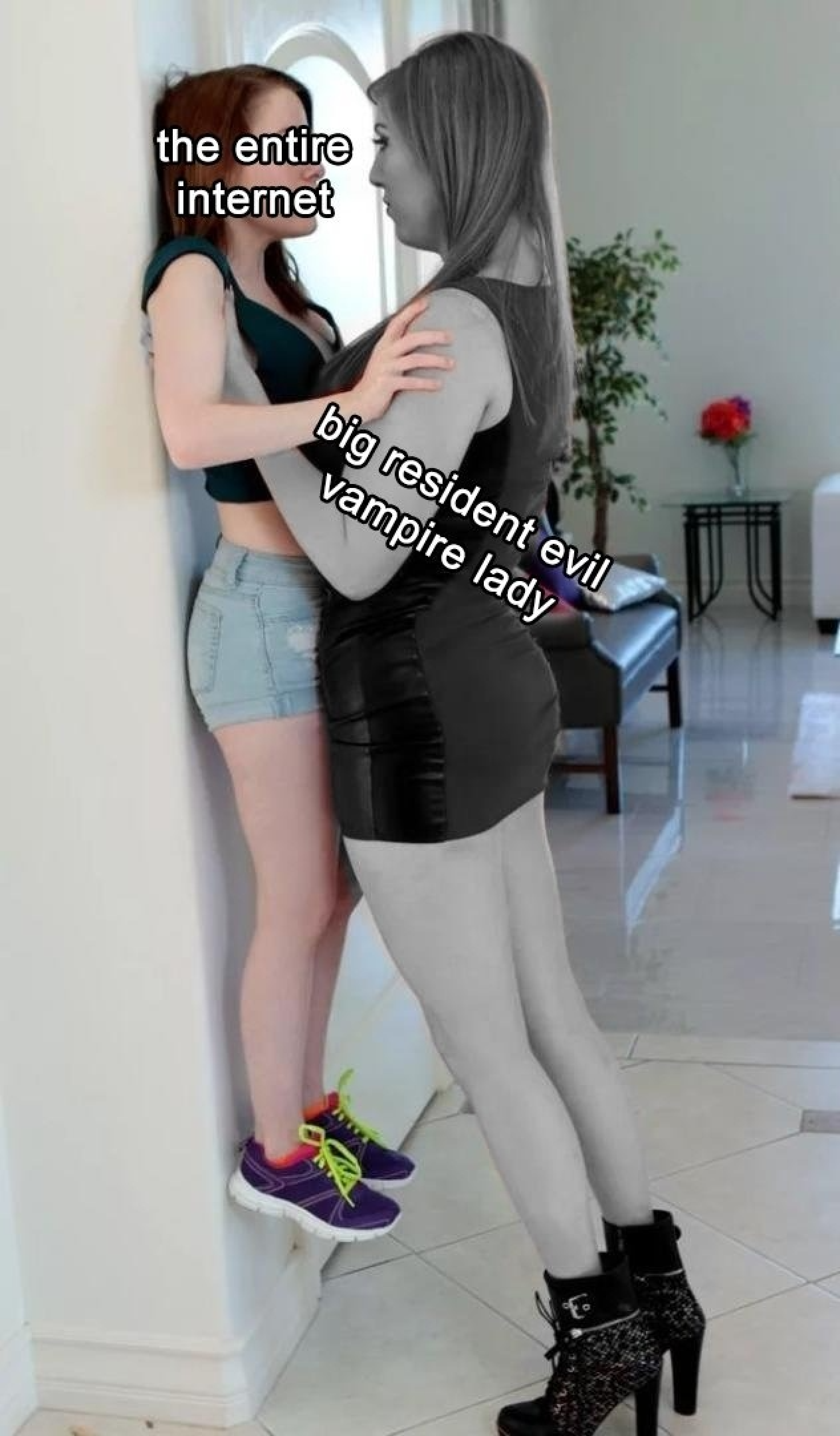 This meme once again lays it on that Lady Dimitrescu is taller than everyone else. In the trailer where she is first seen, she holds up a person and the camera goes into first-person view. So this image is a little more real in the sense that audiences saw Lady Dimitrescu very up close while she held them up.

The meme creator even went so far as to make the original person in the meme greyscale to better match the Lady herself. 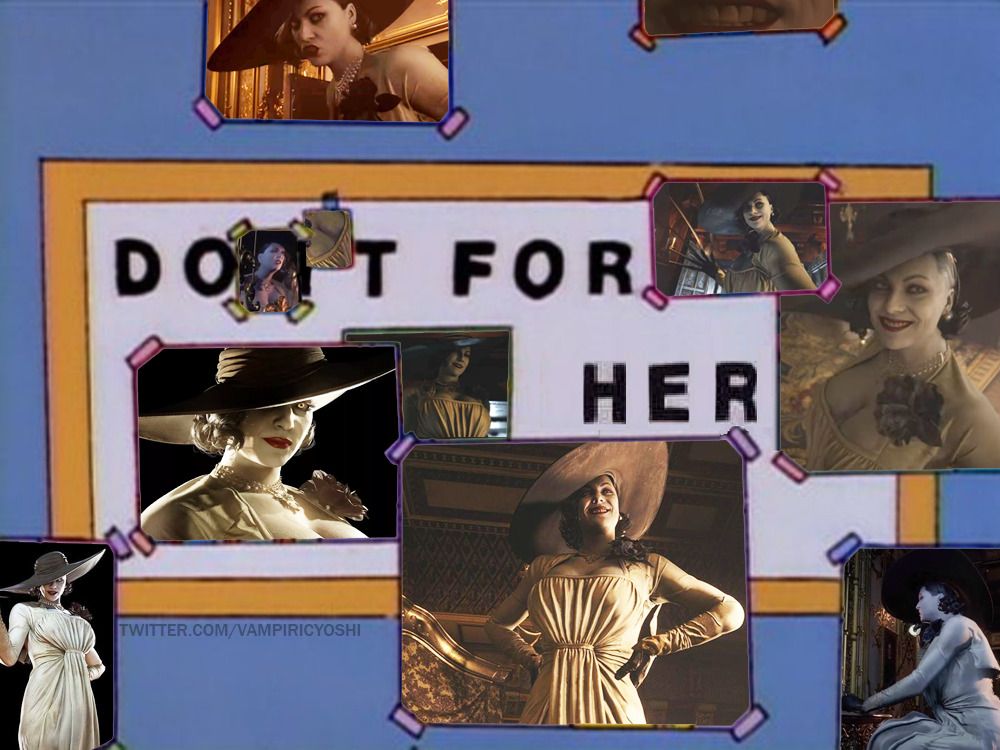 Any female character who is popular has been in this meme since 2012. In fact, some have even done it with characters like Arthur Morgan from Red Dead Redemption 2. Sure, Lady Dimitrescu is probably evil and will kill without a second thought. However, her design is an inspiration all its own. 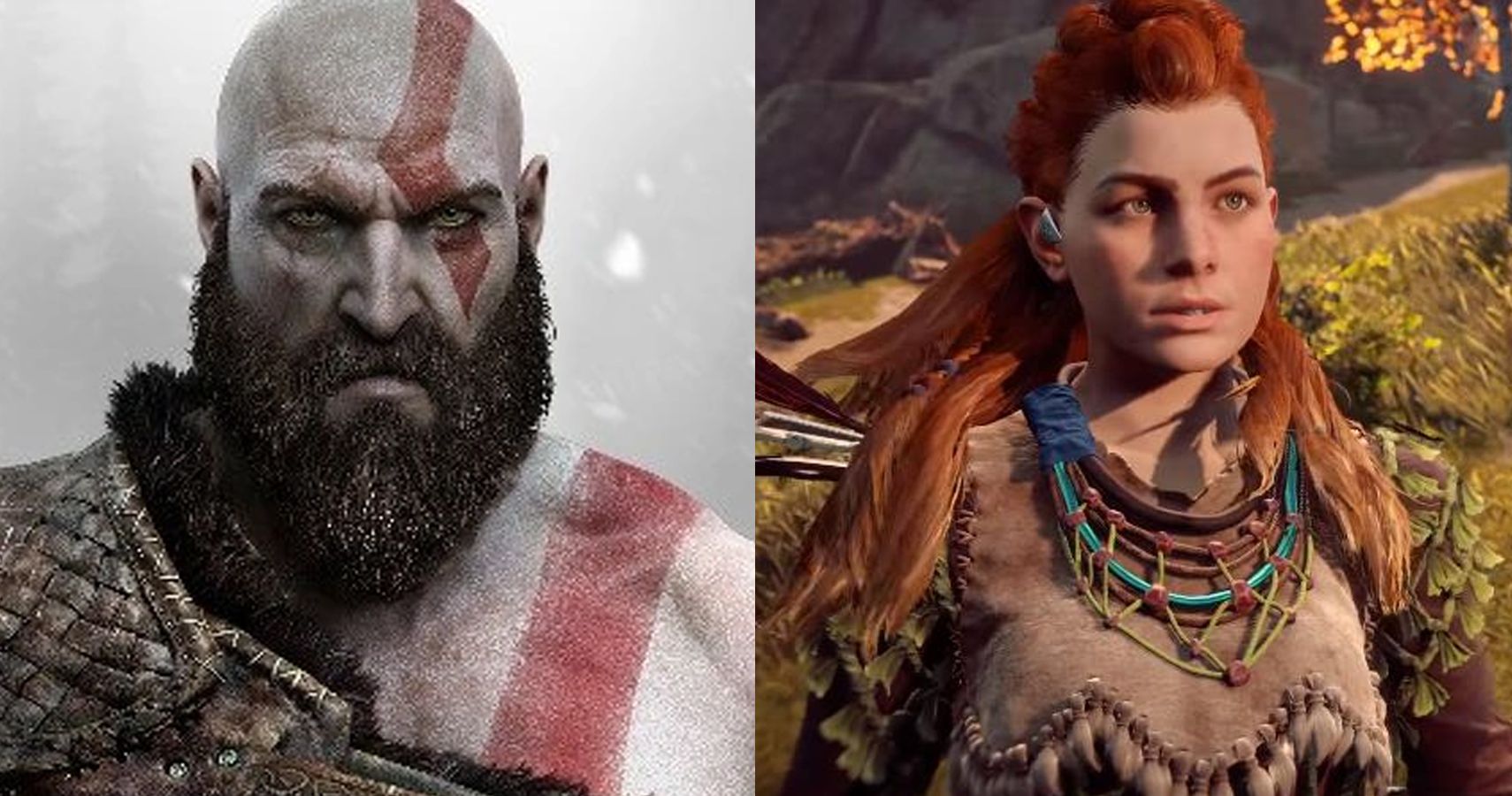