Home » News » Tarzan, Lord Of The Jungle, Swings Onto Oculus Quest In July

Tarzan, Lord Of The Jungle, Swings Onto Oculus Quest In July 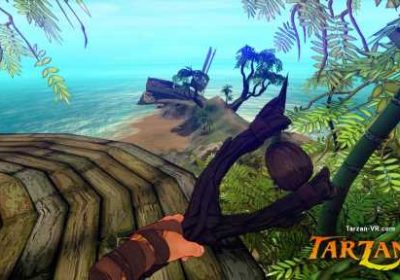 Tarzan VR launches for Facebook’s standalone headset in July with three episodes available at launch. If you haven’t heard the absolute earworm of a song made for the game, think carefully before you click the play button on the video below because you’ll never ever get it out of your head afterward.

Tarzan originally launched for PC VR headsets last year with two episodes available. The third episode is still listed as “Coming Soon” on Steam, but the game’s publisher Fun Train says all three (Episode 1- The Great Ape, Episode 2- The Jagged Edge and Episode 3- The Dead of Night) will be available for the Quest launch. The PC VR release was developed by Stonepunk Studios while the Quest port is made by Steel Wool Studios, which is the developer behind Five Nights At Freddy’s: Help Wanted. Each episode showcases different abilities and weapons designed to offer a bit of light fun embodying the classic jungle vine-swinging character. Fun Train is also the publisher of The Exorcist: Legion VR, which was made in a similar episodic style.

Fun Train teases that more content is coming to Tarzan on PC platforms “with additional platform releases on the horizon.” We’ll be curious to dive into the game on the standalone Oculus Quest and see how its mechanics feel with the wireless freedom of that headset.

Will you be checking this out on Quest? Let us know in the comments below.