The world may not need another video conferencing tool, but Plectica thinks otherwise. The New York-based productivity software company this week launched a platform called Team.Video, with what it hopes are enough distinguishing features to nab a slice of the $4 billion global video conferencing pie.

While video conferencing is hardly new, it has come into its own during the pandemic, with the likes of Zoom and Microsoft Teams surging in popularity. Founded in 2016 by former Shutterstock CFO Adam Riggs, Plectica started work on Team.Video in late 2019 and reached a minimal viable product this spring before launching a beta program for several hundred users.

Riggs, who worked for the U.S. Department of the Treasury and U.S. Department of State after leaving Shutterstock in 2011, said the goal is to “tackle common meeting frustrations,” such as setting clear agendas with timed parameters and improving engagement and participation.

“Team.Video is built to support how people prefer to naturally interact with each other in meetings, both as business colleagues and as humans,” Riggs said in a statement.

Team.Video is an entirely browser-based application, working on Chrome, Firefox, and Safari on the desktop, with support for Safari (iOS) and Chrome (Android) in mobile.

While it shares basic features with the incumbents, Team.Video offers a few notable highlights. For example, you can assign agenda items to specific participants and set a timer for each item to ensure meetings run on schedule. 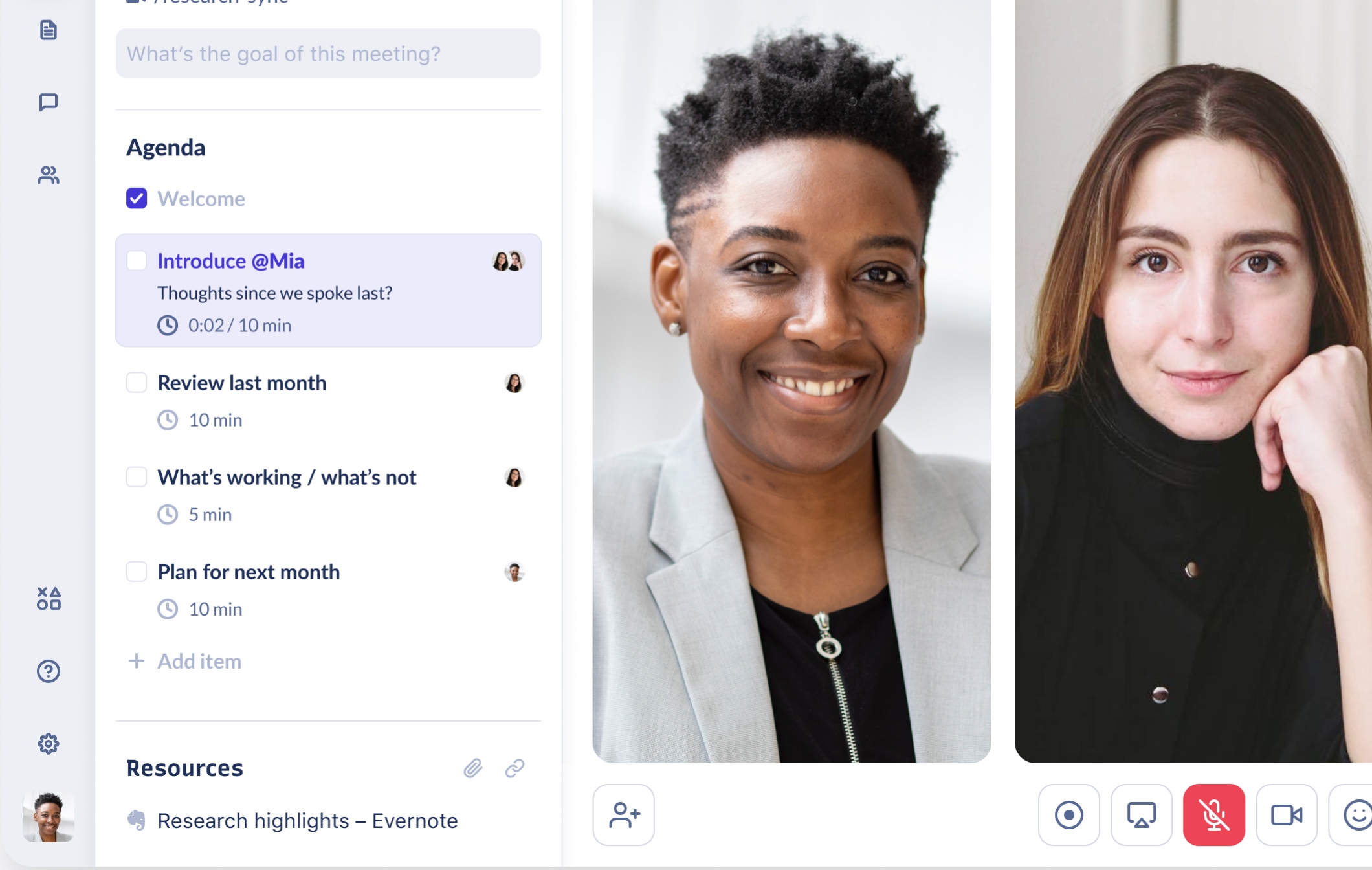 Above: Setting timed agendas in Team.Video

Team.Video also supports collaborative note-taking directly inside the app, and it doesn’t require link-sharing or switching between other tools. 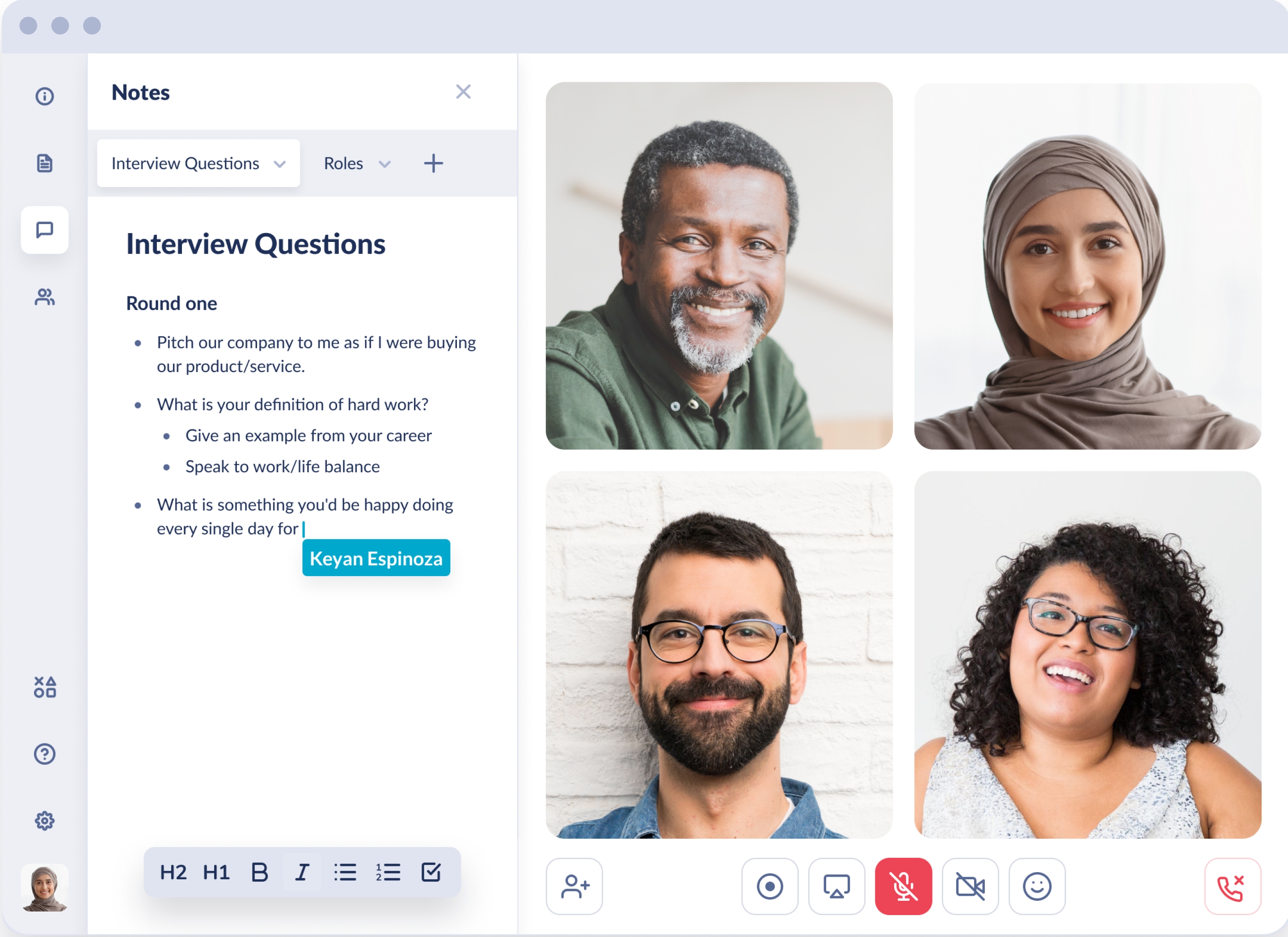 Above: Collaborative notes in Team.Video

Other features include an integrated word jumble game, which meeting participants can play if they join early or someone is running late. This kind of elevates Team.Video into Houseparty territory.

Above: Playing a game in Team.Video

The platform also supports visual-based communications, in addition to voice and text, including a wider array of emoji reactions.

Team.Video also packs a bunch of analytics that show who was late, the amount of time each individual spoke, and even who contributed the most non-verbally (i.e. through emojis). 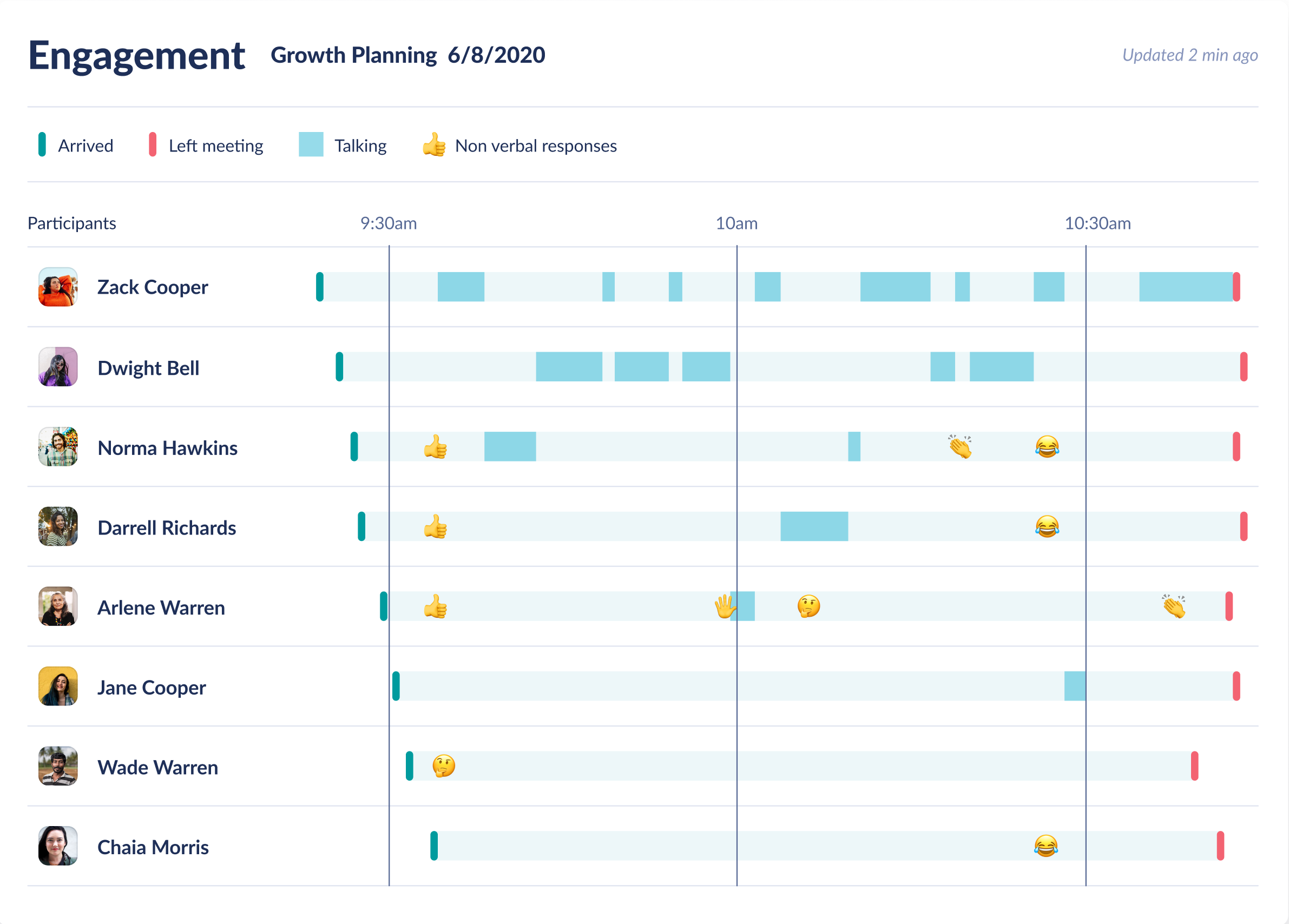 Above: Engagement stats in Team.Video

That kind of rundown might not be to everyone’s liking, as it favors more extroverted participants, but the analysis includes potentially useful data. For example, it’s possible to drill down into participation demographics by age, gender, role, or even salary level, which could be useful in addressing issues of inclusion and equality. 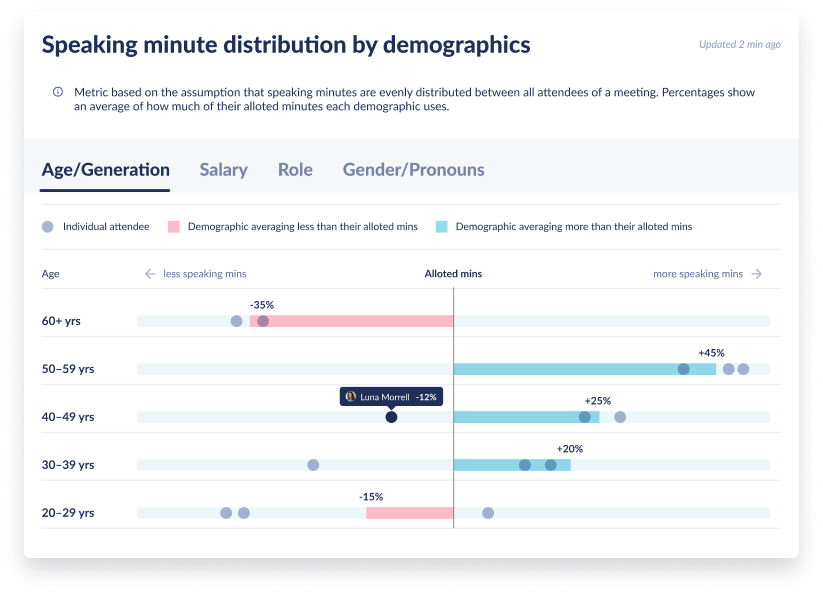 Above: Call participation by demographic in Team.Video

Team.Video sports plenty of essential features, such as real-time status updates (e.g. “David is Away” or “Sandra is just listening“), screen sharing, and the ability to set individual “room” permissions that dictate who can and can’t enter a meeting. 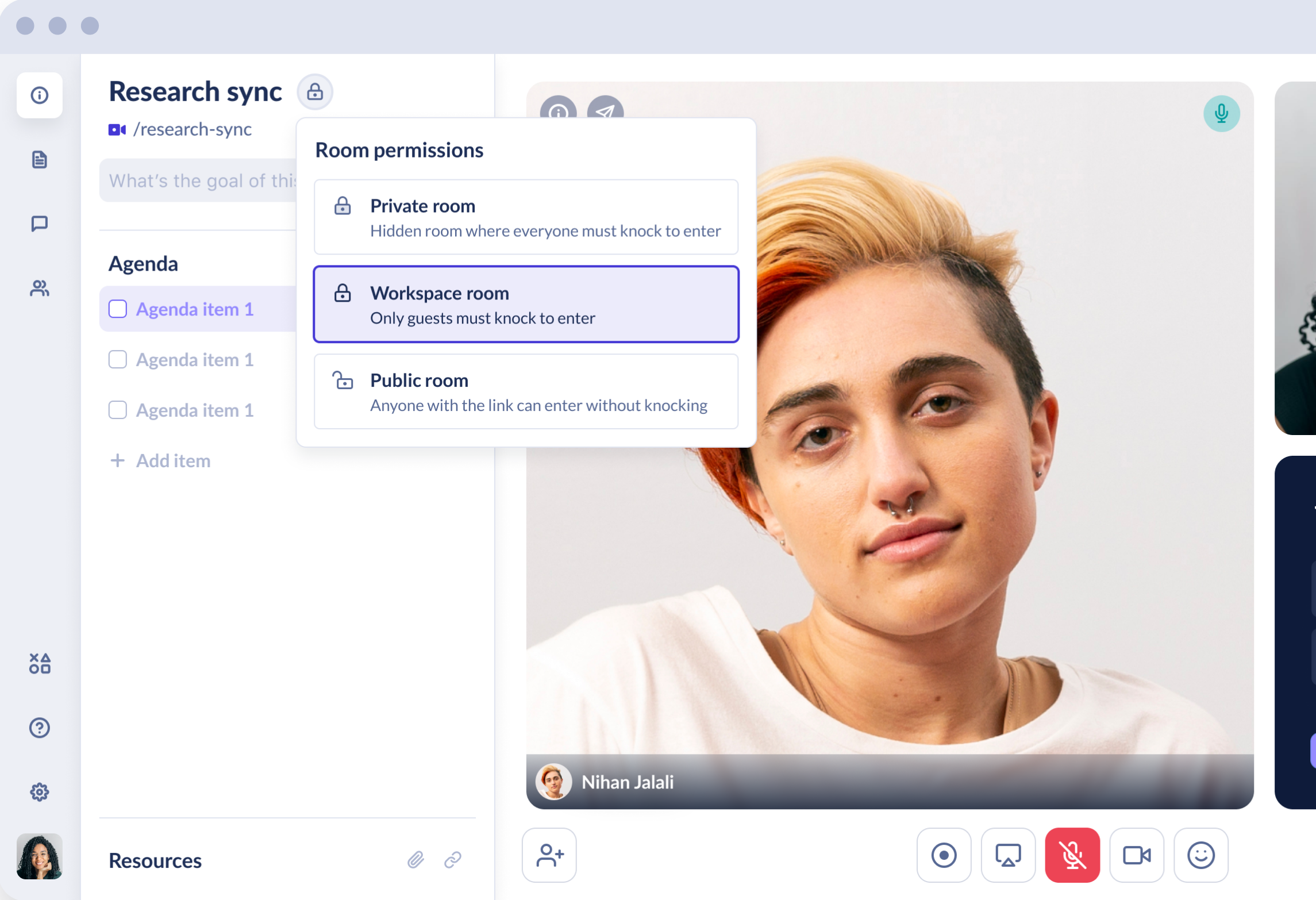 Above: Setting room permissions in Team.Video

Plectica isn’t chasing Fortune 500 companies here, a tacit acknowledgment that many of them are already loyal to Zoom or Microsoft Teams. Instead, Team.Video is targeting small to medium-sized businesses.

Team.Video offers unlimited meetings with seven people for up to 60 minutes free, with no account required. For $15 per user per month — a fee that won’t apply during the first month or two after launch — users can set up a Team.Video account and schedule meetings for 25 people for an unlimited period of time. This “basic” plan also unlocks more features, such as the ability to prepare agendas and schedule meetings ahead of time and to place direct video calls with colleagues. A third “enterprise” plan, which has no publicized pricing, bumps the meeting limit up to 50 people and includes the ability to record meetings.

Larger companies are unlikely to ditch their existing conferencing tools for something like Team.Video, though there is nothing stopping them from using multiple video platforms. But Team.Video is aimed at a very specific type of company, one focused on culture, collaboration, and engagement for smaller teams that have been forced to embrace remote working.