The 8 Best Reggie Fils-Aim\u00e9 Moments Of All Time

In February of this year, Nintendo of America’s president and Chief Operating Officer Reggie Fils-Aimé announced his retirement after fifteen years at the company, elevating Doug Bowser (yes, the jokes write themselves) as his successor. Investors and stockholders will remember Reggie as a man who oversaw the launch of several successful Nintendo products (and also the Wii U). The video game industry at large will remember him as a dominant voice with a powerful stage presence. But ultimately, the internet will remember him for so much more. With today being his last day at Nintendo, we wanted to look back at some of our favorite moments over the years, from kicking some ass to killing his co-workers with lasers. 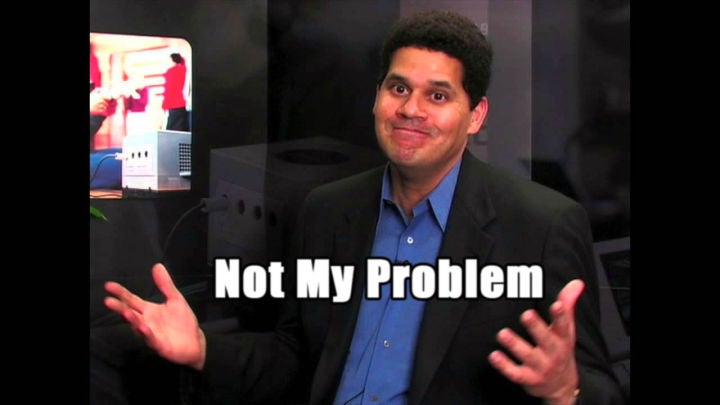 In 2005 when The Nintendo DS was outselling the PSP, Reggie was asked about this being the case because the PSP had yet to launch in Europe. His response? “You know what? That’s Sony’s issue. Not my problem.” The quote went on to be paired with the perfect image of Reggie shrugging with a glimmer in his eye and a smirk on his face, sparking the creation of a legendary meme. 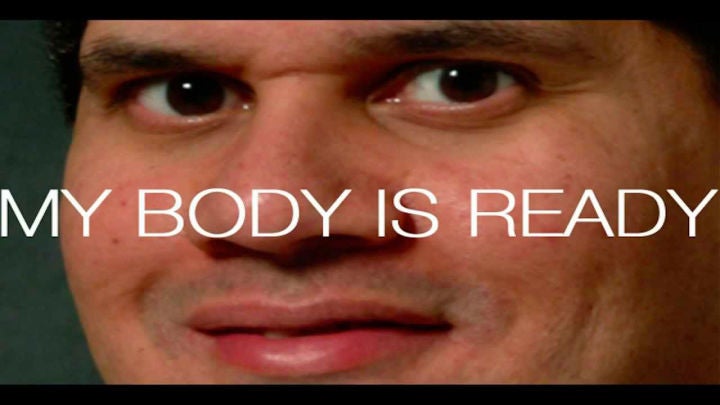 Reggie Fils-Aimé was one of the first people to publicly step on the Wii Fit Balance Board in front of a packed crowd of slightly confused Nintendo fans who probably would have rather seen a new Zelda trailer, but were optimistic nonetheless. Before weighing into Wii Fit, Reggie proudly proclaimed “My Body Is Ready” which fans immediately loved and subsequently warped into “My Body is Reggie,” which rapidly became a battle cry for hype and anticipation before years of Nintendo announcements to come. 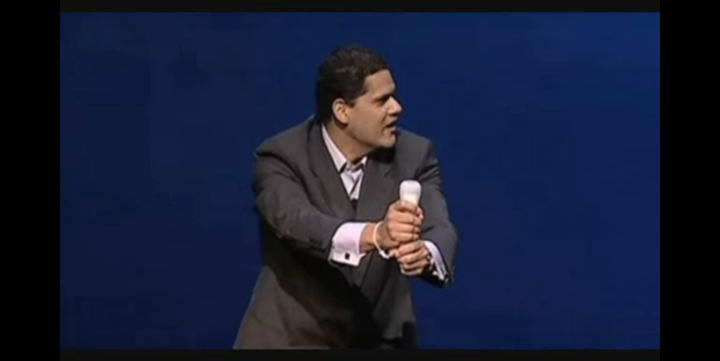 With motion controlled bowling, golf, and tennis, Wii Sports was a massive hit for Nintendo around the world. When it was time to unveil Wii Sports Resort in front of a live E3 audience, Reggie took the stage with Cammie Dunaway, Nintendo’s then VP of Sales and Marketing. The duo showed off the new “Wii Motion Plus”  technology (which promised players the ability to perform 1:1 motion control movements with their video games) by competing with each other’s Mii’s in a sword fight. Reggie won turned to Cammie, and proclaimed “and that’s why they call me the Regginator” which was a thing nobody had called him before but fans went on to call him for years after. Basically, Reggie gave himself a nickname and it stuck, which is a thing pretty much nobody else is able to do. That’s the power of the Regginator. 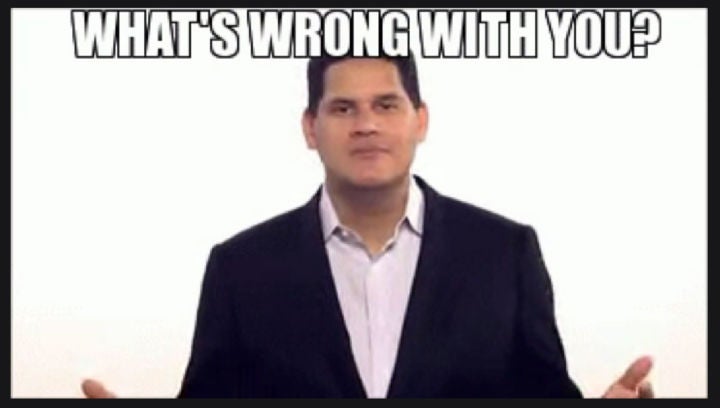 Nintendo kicked off their first “Direct” style presentation with a fairly confrontational Reggie asking “You don’t own a 3DS? What’s wrong with you?” implying that anybody crazy enough to not own Nintendo’s awkwardly titled but immensely popular 3D handheld had actual problems kicking around their heads. Weird implications aside, fans once again latched on to Reggie’s direct (no pun intended) tone, this time using the “What’s wrong with you” quote to loop the perfect gif designed to call out somebody’s wrong opinion on message boards and social media with pinpoint accuracy. 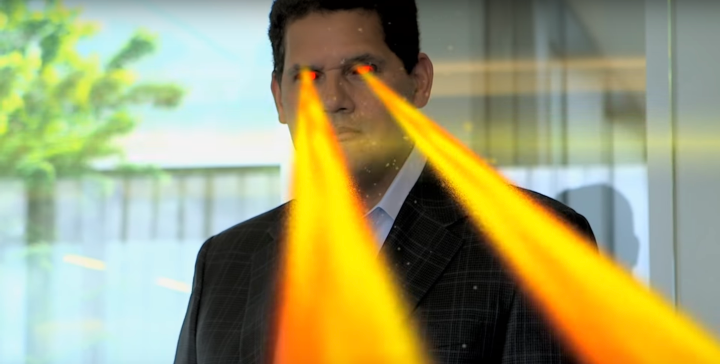 Nintendo continued to display unabashedly self-aware and wonderfully jokey looks at their spokespeople and company culture as their E3 presentations evolved over the years, but few were as funny and over the top as 2014’s, produced by and starring legendary video game comedy troupe Mega64. The sketch – designed to tease their looming E3 presence – involved sending a wonky robot version of Reggie into NOA’s offices to gather intel and secrets from Nintendo employees. This rapidly ends up being a short-lived plan, as the robot (or mech) begins to short circuit. Oh, and he shot lasers from his eyes and disintegrated people. Reggie Fils-A-Mech was played by Reggie Fils-Aimé himself and audiences adored seeing Reggie loosen up a bit and pretend to murder his co-workers. Suffice to say, it gave everyone a lighthearted look at Reggie’s goofiest side, as well as a behind-the-curtain peek at Nintendo’s offices and upcoming battle plans for E3. 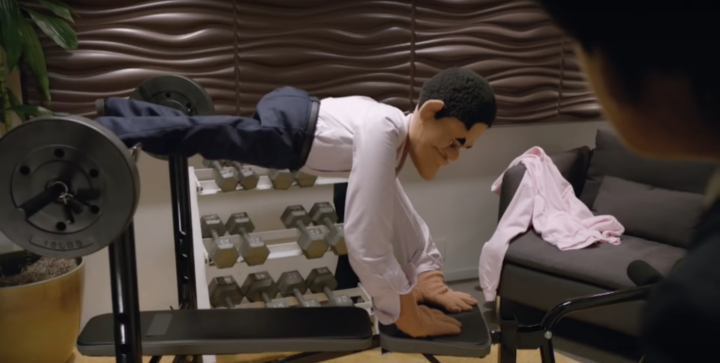 Following Robot Reggie, Nintendo’s next E3 Direct took a much softer approach – literally. Nintendo introduced a trio of puppet versions of their frontmen Satoru Iwata, Shigeru Miyamoto, and Reggie Fils-Aimé. Reggie’s puppet debut came complete with a look at his green room – packed weights and weight benches – where Puppet Reggie and his muscled up puppet arms were doing push-ups in a button down shirt, which is probably how Reggie starts most days anyway. 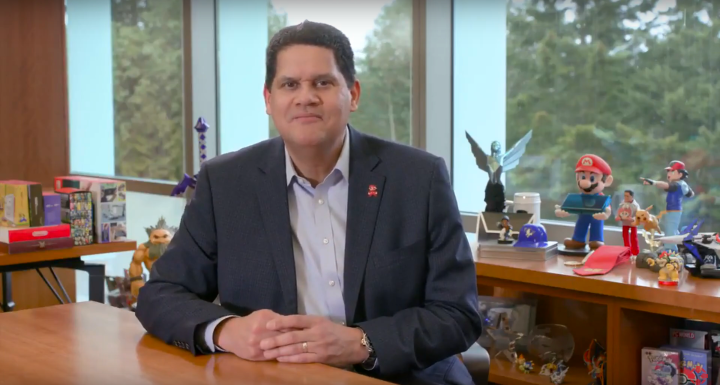 After 15 years with Nintendo – through ups, downs, mechs, puppets, and jabs at competitors – Reggie finally said goodbye to his legacy and tenure at Nintendo with a heartfelt video message to fans. Sure, he didn’t talk smack about his rivals or kill anyone with lasers, but what he did do was pure class, the embodiment of humility and positivity. Reggie’s era at Nintendo is coming to an end and we’ll never, ever forget him. 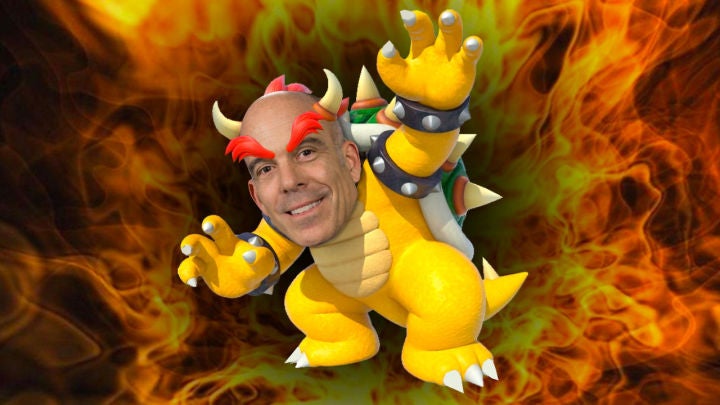 So what are your favorite Reggie moments? Do you think his departure means we’ll finally get him as a playable Smash Bros. character someday? Let me know in the comments below!

Brian Altano is a host and producer at IGN who’s really going to miss Reggie and his killer robot eyes.