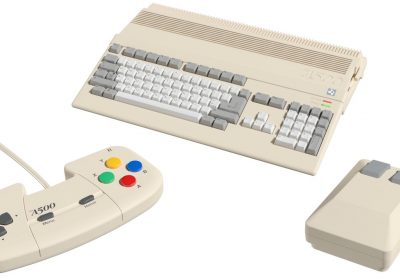 The officially licensed mini Amiga A500 has got a launch date. The original Amiga A500 launched in 1987, developed by Commodore, and was a home computer especially popular in Europe, and favoured for gaming due to its graphics and sound capabilities. In 2022, retro enthusiasts can get a shruken down version of the popular late 80's computer, along with built-in games.

Retro Games' mini version of the Amiga A500 is launching on March 25, 2022. It's a faithful recreation of the original, albeit miniaturised, and includes an integrated keyboard, an authentic mouse, and a precision gamepad. There's no monitor as this is a retro console so you can hook it up to your TV or any compatible screen.

The A500 Mini comes with 25 games built-in, but players can play other compatible games via a USB drive. The full list of what these 25 games are has now been revealed and it includes classics such as Alien Breed 3D, Simon the Sorcerer, and Worms. The 25-game collection includes:

The Amiga A500 Mini has been outfitted for modern day requirements so the retro console can output a 720p HD image at the original 50Hz or a more modern 60hz refresh rate. The A500 Mini also includes CRT filters and other visual options and settings that players can adjust until they find a look that's suitable.

Official retro consoles are an expanding range since we've had the NES and SNES mini, the Sega Genesis mini, and the PlayStation mini. Players can now get in on older classics to complete the retro vibes.