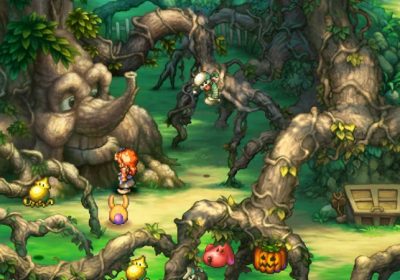 I’ll always have a special place in my heart for the Mana series. It was integral in developing my love for RPGs and I created powerful memories that I’ll always cherish by bonding with my grandpa over Secret of Mana. I love getting lost in the series’ vibrant worlds, taking on larger-than-life baddies, and being taken with the stellar music – both poignant and adrenaline-pumping – that never disappoints.

When Legend of Mana hit PS1 in 2000, it threw me for a loop, as it wasn’t a typical entry for the franchise. Sure, it had rabites, big boss battles, and its trademark action combat featuring co-op, but Legend of Mana’s structure is much different than previous titles (more on that later). It resulted in an entry that’s just as celebrated as it is disliked. I land on the side that sees it as the last great Mana game before Square Enix struggled with the franchise’s direction. Legend of Mana has its flaws, but it was also wise beyond its years in some of its systems and storytelling. I go back to it every few years just to see if my feelings will change, and every time I still see its magic – even if it didn’t always perfectly hit the target.

In Legend of Mana, you’re building out the world on the map just as much as you are fighting in it. You collect artifacts for towns and dungeons and put them on a sprawling world map, deciding on the best placement for bonuses, which can impact everything from finding a rare monster for recruitment to factoring into which quests you can access. The further away from your home you place items, the more difficult the enemies and journey ahead become. Speaking of your home, as you play, you build it up to feel like one, recruiting characters to live on your premises, filling a monster ranch with baddies to fight at your side, customizing weapons at your very own workshop, and planting seeds at the Mana Tree to bear different items to lure new pets your way. None of these systems are too deep, but they do make your home feel like more than just a place to save your game.

What I love about Legend of Mana is that it doesn’t hold your hand, and forces you to seek out your own stories within its various landscapes. I look at the game as one big storybook, but you must find the pages. You advance the narrative by stumbling upon vignettes, that trigger through exploration and placing artifacts. These offer short slices of story and gameplay, so no level overstays its welcome. There’s something satisfying about interacting with the world and putting the pieces together to activate these short jaunts, like seeing an event and following a character from it, or hearing a villager discuss an issue and going to the scene in question. Some of these chapters end on cliffhangers, while others are stand-alone, but my favorite part is the variety within these stories, which can get deeply philosophical but are also balanced out by more humorous, light-hearted adventures. In addition, certain arcs have a bigger impact on your progression and overall mission of restoring the Mana Tree; others feel more like bonus chapters, opening more customization options.

Legend of Mana’s core loop draws me in every time. What I appreciate most is it takes the things I love about RPGs, but it presents them in a slightly different way. For instance, we all explore towns, but how many times do we actually feel like our actions in them are fueling the story? This little touch makes the journey a bit more personal, which is kind of ironic considering your character is not the focus by any means in Legend of Mana. In most cases, you are merely an observer that offers a helping hand, witnessing how people survive and manage conflicts in the worst of circumstances, as extinction looms over them. However, it’s how you have to work to see what’s really inside this world that makes everything feel more meaningful. Legend of Mana is a game about experimentation, and you’re not shown the way, you find your own way.

Every time I go back to it, I’m worried I won’t feel as endeared to it as I once was, but that quickly evaporated after playing a few hours of this remaster for PS4, Switch, and PC. While I think Square Enix missed the opportunity to do a full-on remake as it did with Secret of Mana and Trials of Mana, the remaster offers some quality-of-life improvements, such as faster load times, being able to save almost anywhere, the ability to turn off normal encounters, and updated visuals. There’s also a rearranged soundtrack by original (and all-star!) composer Yoko Shimomura, who you might know from Kingdom Hearts and Final Fantasy XV.

For its time, Legend of Mana was fairly inventive with its systems and the way you created the world. However, it’s also an offbeat, flawed entry (the action combat has seen better days). I won’t deny those aspects. They’re part of the charm, after all. If you’ve always been curious about this game, now is the time. And for those who also appreciate this quirky, heartwarming entry, share your love in the comments and consider another playthrough.