It's the first day of Magic: The Gathering's Commander Legends: Battle for Baldur's Gate previews, and we've already had by far the biggest look at the set we're likely going to get. With over 80 cards revealed in the last 24 hours, we got a great look at new mechanics like initiative and Backgrounds, as well as older, returning ones like Adventures and Gates. Of course, we also saw lots and lots of the new legendary creatures vying for your attention.

With an almost overwhelming amount of stuff revealed, it may be hard to pick out which cards you should be most excited for. Here are the highlights of day one of Commander Legends: Battle for Baldur's Gate's preview season. 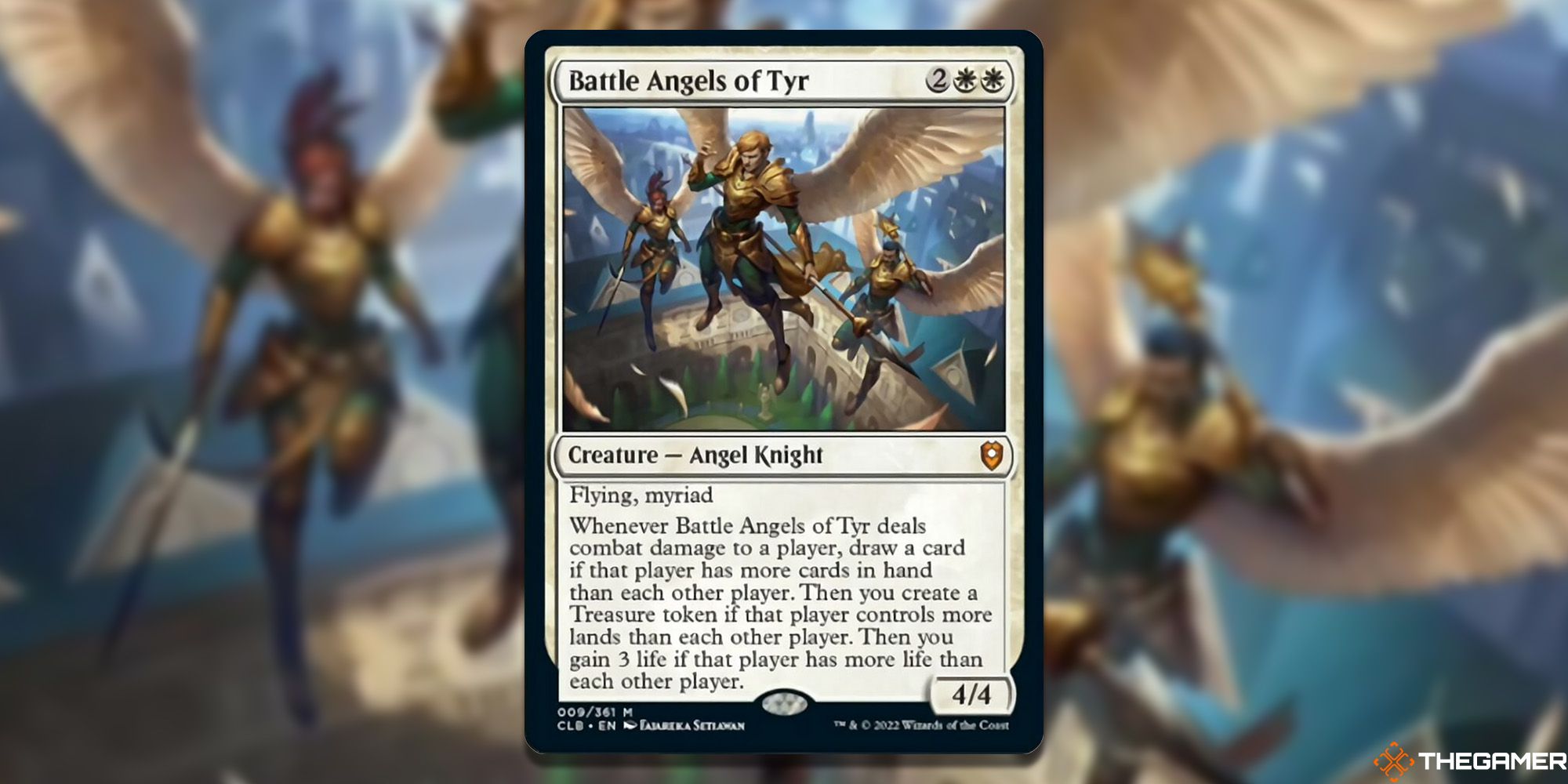 Battle Angels of Tyr is a bit wordy, but the effects feel really nicely balanced for Commander. As long as you can get the original and the two copies through unblocked, you could be drawing cards, making Treasure, and gaining life all at the same time. It isn't a big, splashy effect, but a good way for mono-white to keep parity with the rest of the table. It's also two highly synergistic creature types, making it a decent beater even if you can't get any rewards off of it.

Treasure has become a hot-button topic in Commander, as more and more cards are printed that produce large amounts of it all at once. This feels like a rare example of Treasure being done reasonably: if you're super far behind on land, you'll get more Treasure tokens to help get you back up to speed. If you're already storming ahead in resources, you won't get any. 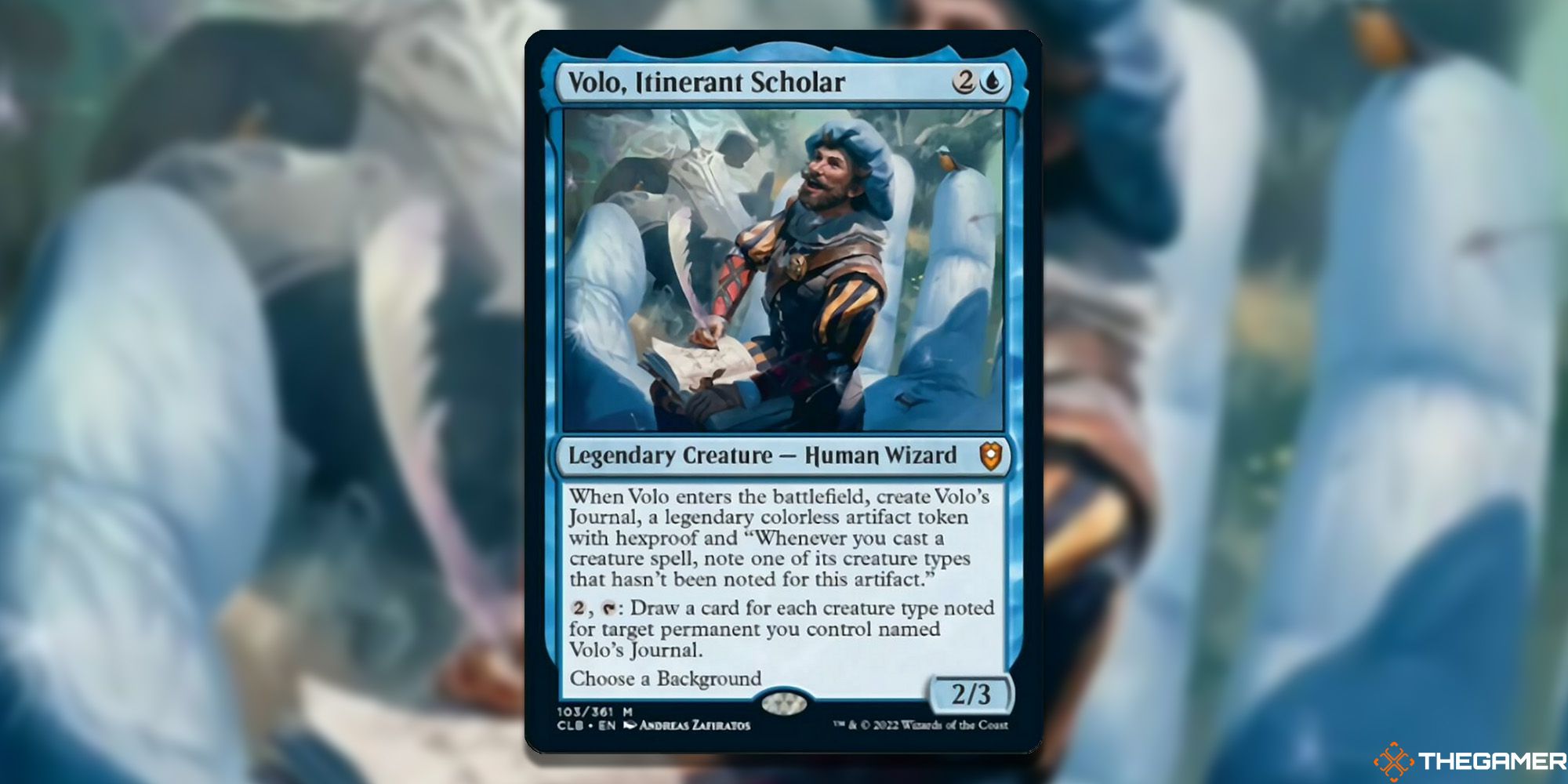 When Volo enters the battlefield, create Volo's Journal, a legendary colourless artifact token with hexproof and "Whenever you cast a creature spell, note one of its creature types that hasn't been noted for this artifact."

Volo's back, after making his first appearance as a Simic (green/blue) commander in Adventures in the Forgotten Realms. This time, though, he's mono-blue, and rewards you playing lots of creature types with card draw.

The previous version of Volo only gave you bonuses if you didn't already control a creature of the type you cast, whereas this one just cares about creature types you've played before. That means one thing: this is an incredible changeling commander.

Changelings are all creature types at once, and so you can note down any creature type you like whenever you cast one. Elf, Beast, Horror, Angel, sure, whatever. Okapi, Phyrexian, Deserter, Orb, Noggle, Triskelavite; as long as you brush up on your obscure creature types and run a lot of changelings, you could be drawing a ludicrous amount of cards.

The best bit is Volo, Itinerant Scholar has "Choose a Background", so you can expand his colour identity by partnering him with one of the set's new Background enchantments. Changelings are mostly found in blue and white, so consider using a background like Noble Heritage to open up your options. 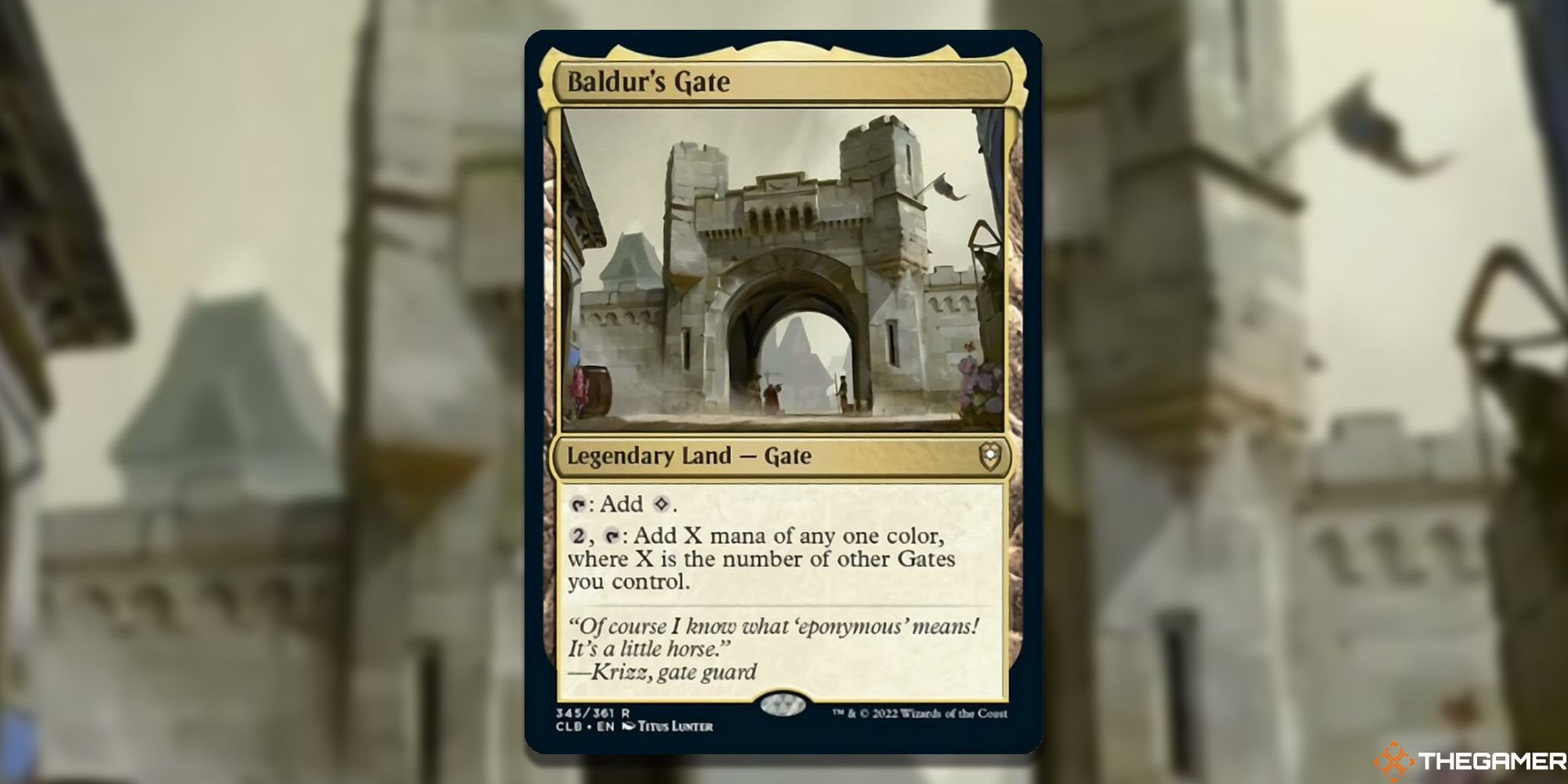 Pay two generic, tap Baldur's Gate: Add X mana of any one colour, where X is the number of other Gates you control.

As you'd expect from a set based in Baldur's Gate, the Gate land type is making a comeback with nine new cards spread across colours and rarities. Though Gates aren't as big a thing in Commander as they are Pioneer or Explorer, especially since last year's banning of Golos, Tireless Pilgrim, there are still some fun Gate-centric WUBRG decks out there.

Even if you're not playing a Gate deck, Baldur's Gate can really help with the mana of low-budget decks. Players hoping to save a penny often gravitate towards the Ravnica Gate cards as they're cheap and produce two colours of mana, and having a Baldur's Gate in there would give you a better reward for running suboptimal lands. 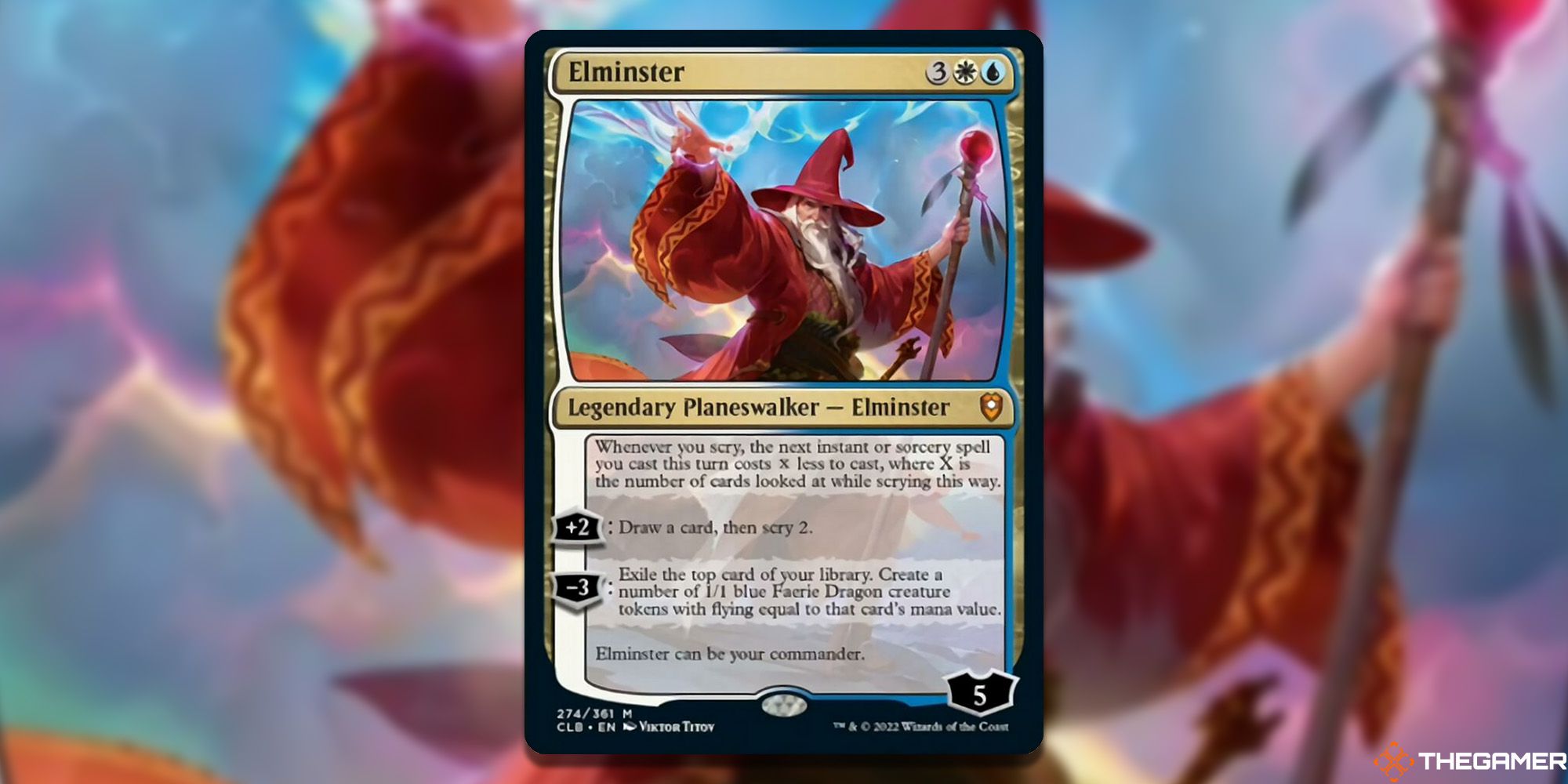 Whenever you scry, the next instant or sorcery spell you cast this turn costs X less to cast, where X is the number of cards looked at while crying this way.

Plus two loyalty: Draw a card, then scry 2.

Minus three loyalty: Exile the top card of your library. Create a number of 1/1 blue Faerie Dragon creature tokens with flying equal to that card's mana value.

Elminster can be your commander.

One of the most notable absences from last year's Adventures in the Forgotten Realms was Elminster. He was one of the first characters made by the Forgotten Realms' creator Ed Greenwood, and his presence can be felt right across the setting. He was even the protagonist of an entire saga of books, known as The Elminster Series.

In Magic, he's joining the small group of planeswalker cards that are legal commanders, and he's potentially one of the best. Guiding you into a scry-heavy strategy and reducing the cost of the instants and sorceries you play afterwards is incredible, and you can use all that scrying to set up powerful spells on the top of your library to turn into Faerie Dragons. 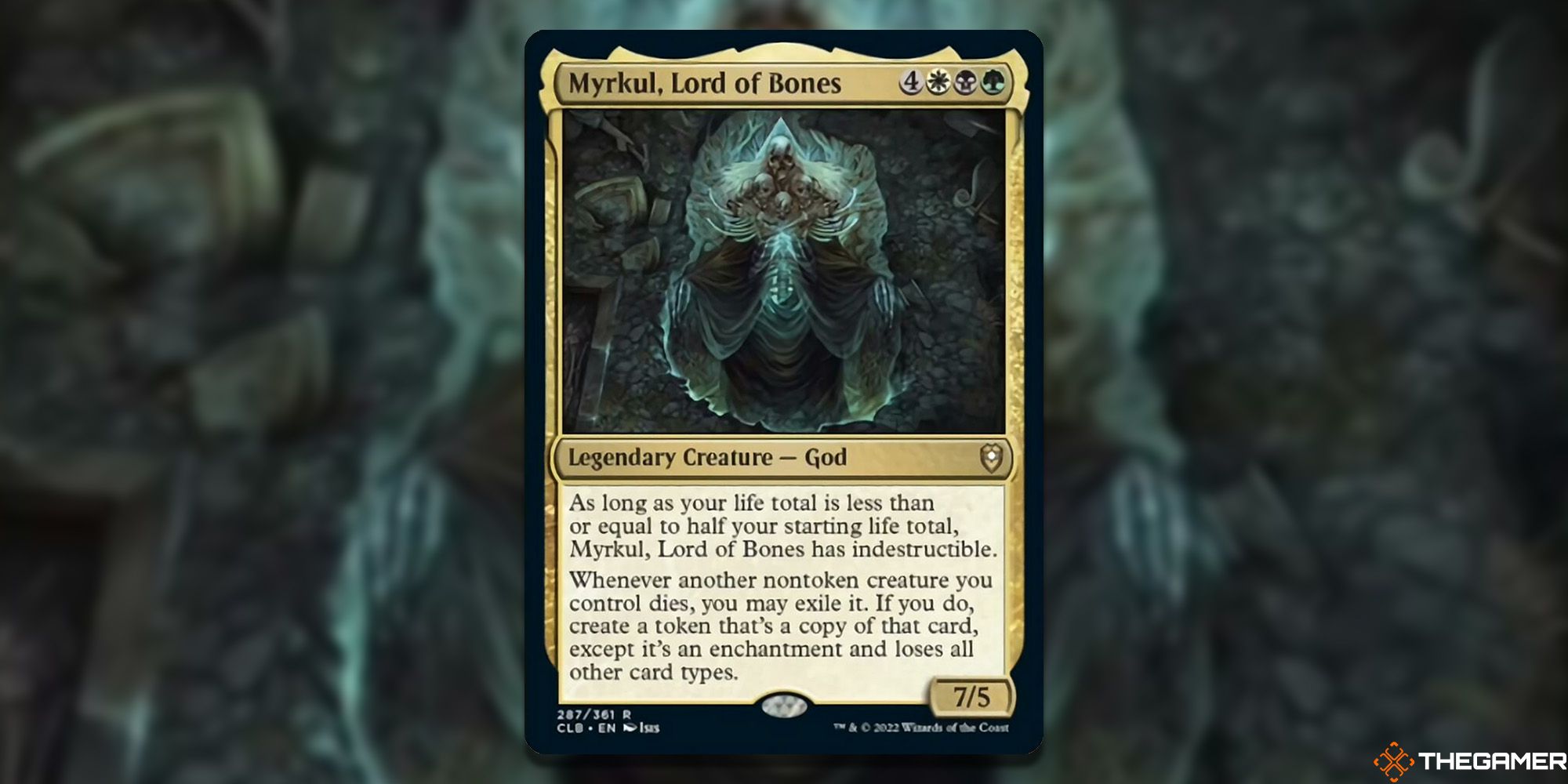 As long as your life total is less than or equal to half your starting life total, Myrkul, Lord of Bones has indestructible.

Whenever another nontoken creature you control dies, you may exile it. If you do, create a token that's a copy of that card, except it's an enchantment and loses all other card types.

This is easily one of the best Abzan (white/black/green) commanders ever printed. Powerful, flexible, and difficult to remove, there are so many ways you could build Myrkul. It can serve as a powerful Aristocrats, Enchantress, stax, or hatebears, or maybe all at once if you're feeling really evil.

Combine it with a few sacrifice outlets and death trigger doublers like Teysa Karlov, and you've got a way to generate tons of enchantments. Throw in some permanents with constellation to trigger whenever an enchantment enters, like Grim Guardian, Nessian Wardens, and Setessan Champion and it gets scarier.

One of the most frightening ways of building Myrkul will be to convert your hatebear creatures into stax pieces. Enchantments are harder to remove than creatures, and so things like Aven Mindcensor, Drannith Magistrate, Manglehorn, and Archon of Emeria turn into a wall of enchantments that can be tough to deal with. 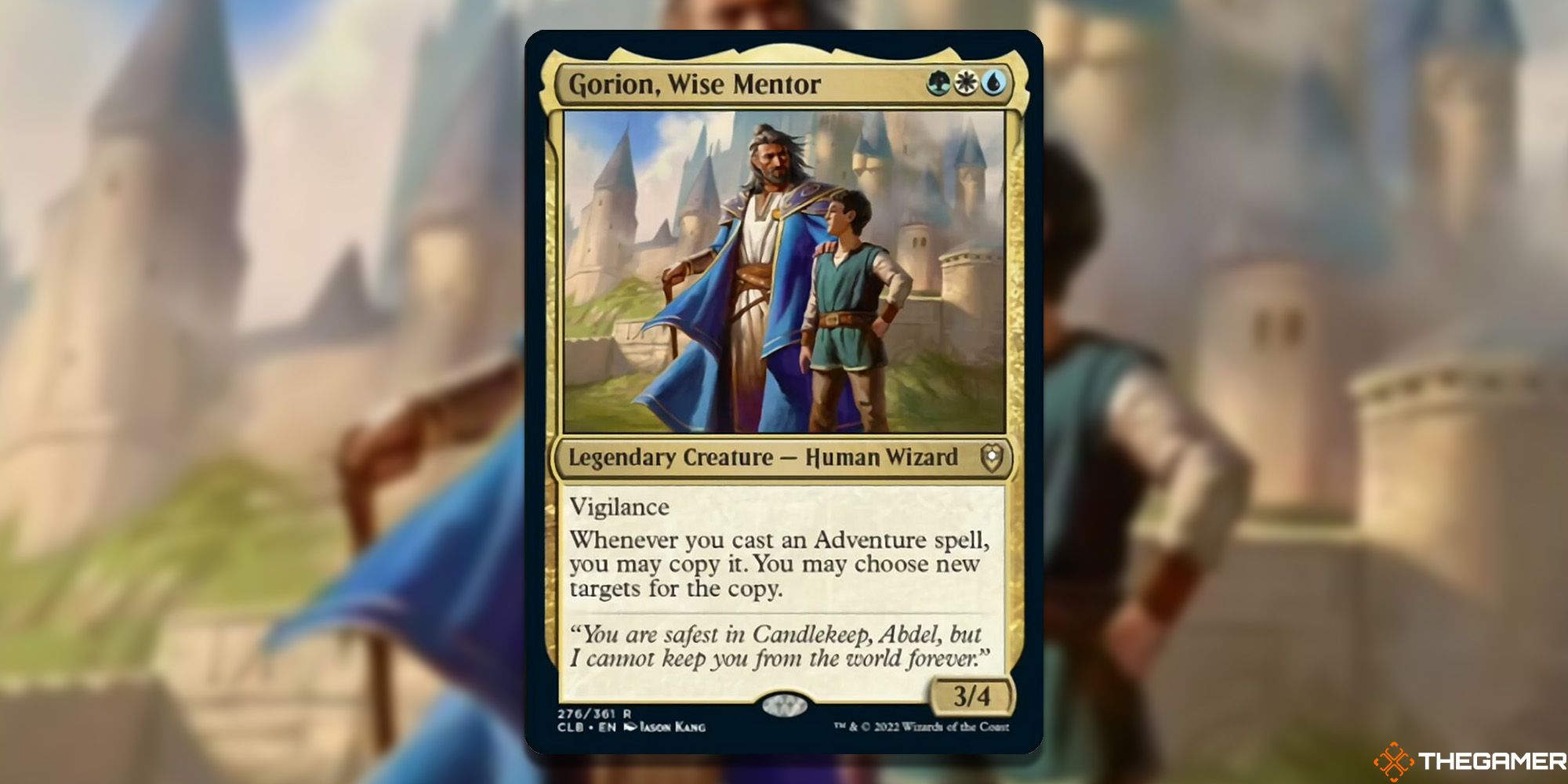 One green, one white, one blue legendary creature – Human Wizard – 3/4:

Whenever you cast an Adventure spell, you may copy it. You may choose new targets for the copy.

Another returning mechanic for Baldur's Gate are the Adventure cards from Throne of Eldraine. Two spells in one, though they were a huge part of that set's Standard environment, they've never had a particularly big impact on Commander. Gorion hopes to change that, helping to copy any Adventure spell you cast.

Though this only affects the actual Adventure spell half and not the creature half, it still has a lot of utility. For just two mana you could tap four creatures with Ardenvale Tactician, bounce two permanents with Brazen Borrower, or pull two creatures from your graveyard to your hand with Order of Midnight.

As this is only day one of the preview season, we're also likely to see a lot stronger Adventure spells designed with Commander in mind to make Gorion even stronger. 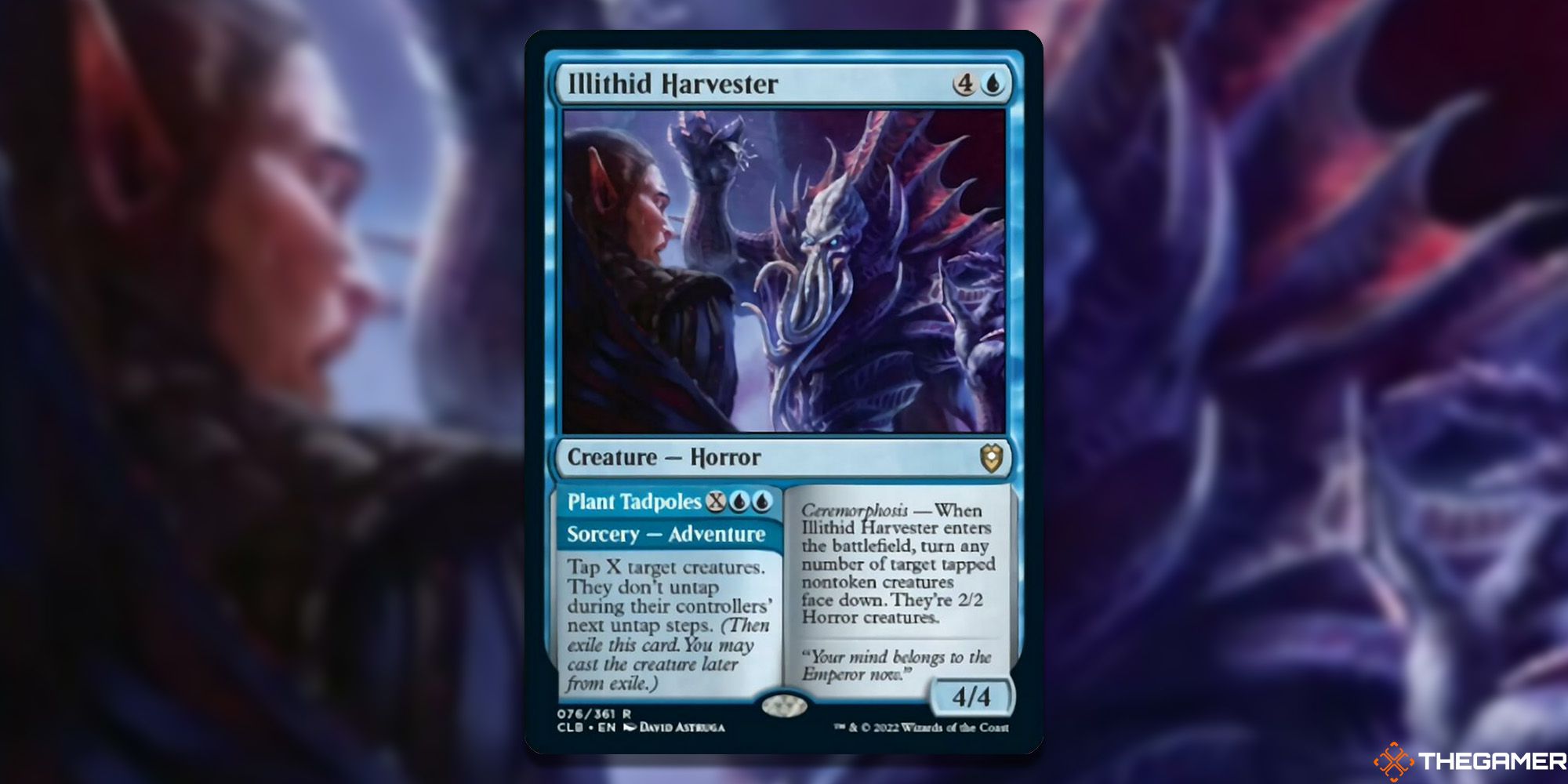 Ceremorphosis: when Illithid Harvester enters the battlefield, turn any number of target tapped nontoken creatures face down. They're 2/2 Horror creatures.

Tap X target creatures. They don't untap during their controllers' next untap step.

Speaking of Adventures, Illithid Harvester is easily one of the scariest we've ever had. For X generic and two blue you can use its Plant Tadpoles half to tap down a load of opponents' creatures, and then cast the creature half from exile to turn them all into 2/2 Horrors.

An interesting way to use this could be with a commander introduced in Kamigawa: Neon Dynasty, Hinata, Dawn-Crowned. With its cost-reducing ability you can tap down every creature on the battlefield for just two blue mana, giving you a neat way to close out the game with a hefty combat phase.

Or you could use it to buff your own, smaller tokens. We have Horror tribal commanders already announced for the set, like Captain N'ghathrod from the Commander precons, and being able to turn all your 1/1 creatures into 2/2 Horrors that synergise better is definitely something to consider. 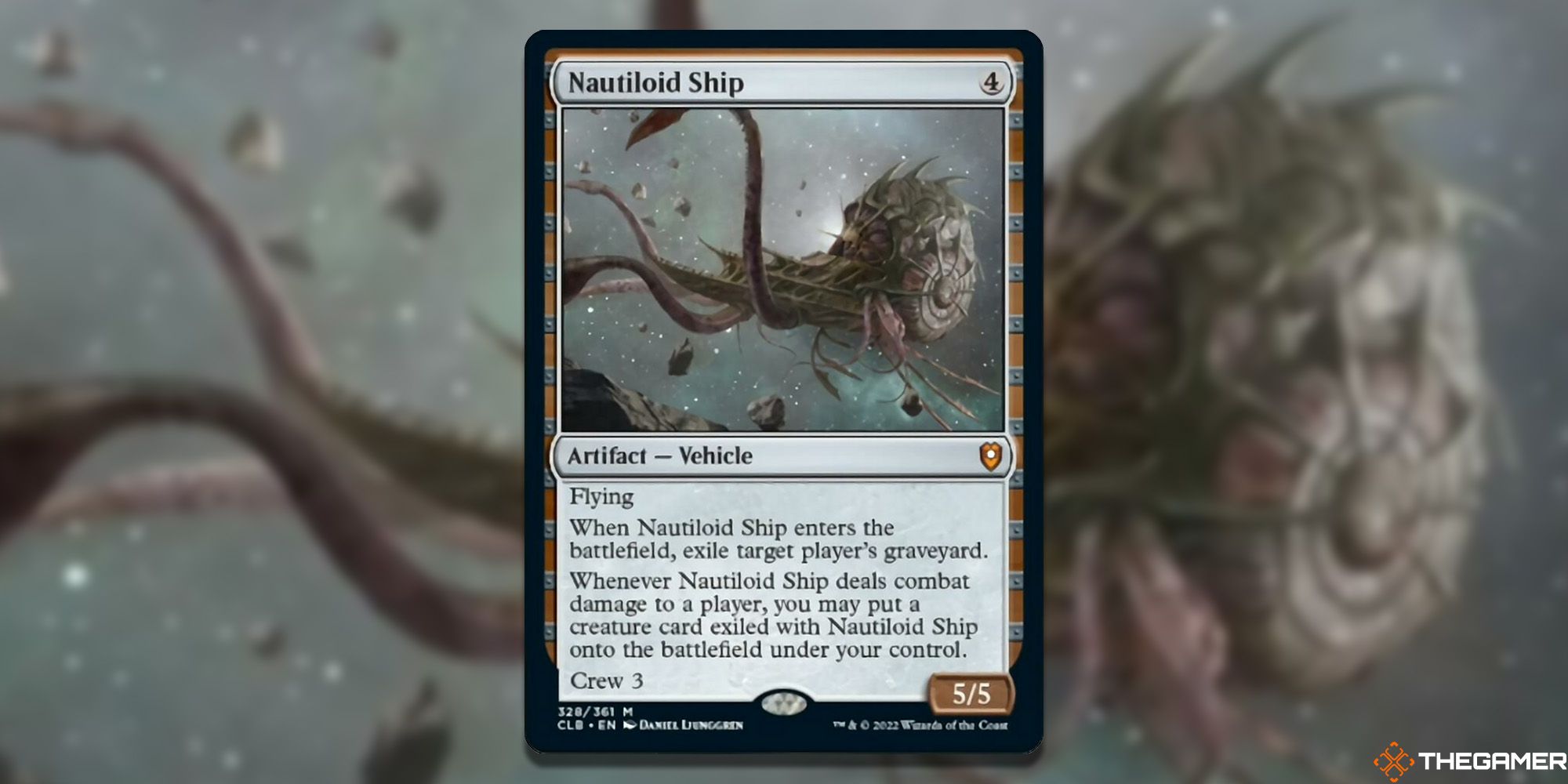 Whenever Nautiloid Ship deals combat damage to a player, you may put a creature card exiled with Nautiloid Ship onto the battlefield under your control.

Wizards got a bit of Spelljammer in their Baldur's Gate, with this Illithid-crewed spaceship soaring through the Astral Sea. Flavour-wise it's awesome: the Illithids are a scourge who turn any unsuspecting victims into more Illithids through a process known as ceremorphosis. Out among the stars, their reach spreads far beyond the walls of Baldur's Gate.

Mechanically, it's just as exciting. Targeted graveyard hate that allows you to pluck creatures out of exile and put them onto the battlefield under your own control is a great way to turn someone's graveyard deck against them. It also poses your opponents an interesting question: do they destroy the Nautiloid ship and lose every creature exiled with it forever, or allow you to bring them back in the hope you'll eventually get it back into your graveyard later on?

This is a tool that Greasefang, Okiba Boss decks are going to love. Greasefang is big enough to crew it on its own, it pulls creature into play, and deals a whopping five damage when it does. It's not quite a Parhelion II, but it's certainly close. 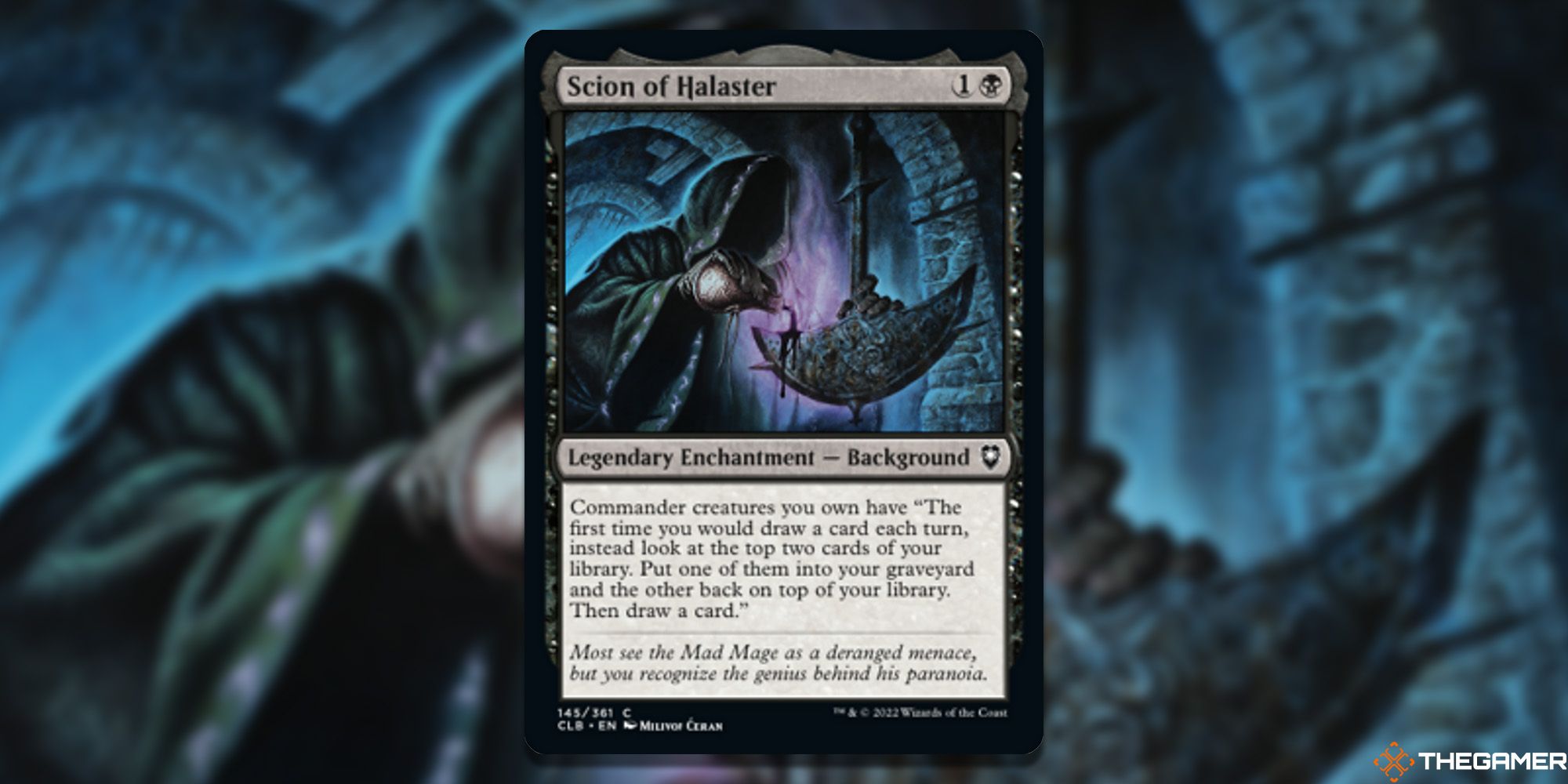 Backgrounds are a new enchantment type introduced in Battle for Baldur's Gate. They're effectively enchantment partners for your deck – as long as your other commander has "Choose a Background" on it, you can use both it and a Background as its two commanders.

There are lots of Backgrounds already revealed, with some incredibly powerful ones like Master Chef, Noble Heritage, and Raised by Giants. And yet, it's the simple, unassuming common Scion of Halaster that's the most interesting.

While it isn't exactly the same, Scion of Halaster almost allows you to replace your first draw every turn with a Surveil, and the potential of it is huge. You can filter out the cards you don't need more efficiently, going through two cards every turn helps you dig for the answers you need, and it even fits excellently into graveyard decks by giving you a way to get your choice pieces into it. Just think of how powerful this could be in a Syr Konrad the Grim deck.

It's not just the effect itself that's great, it's the rarity. Being a common means this'll be legal in not just Commander itself, but also the growing Pauper Commander variant. That kind of card selection in common is rare, and so we could see this get quite a bit of play. 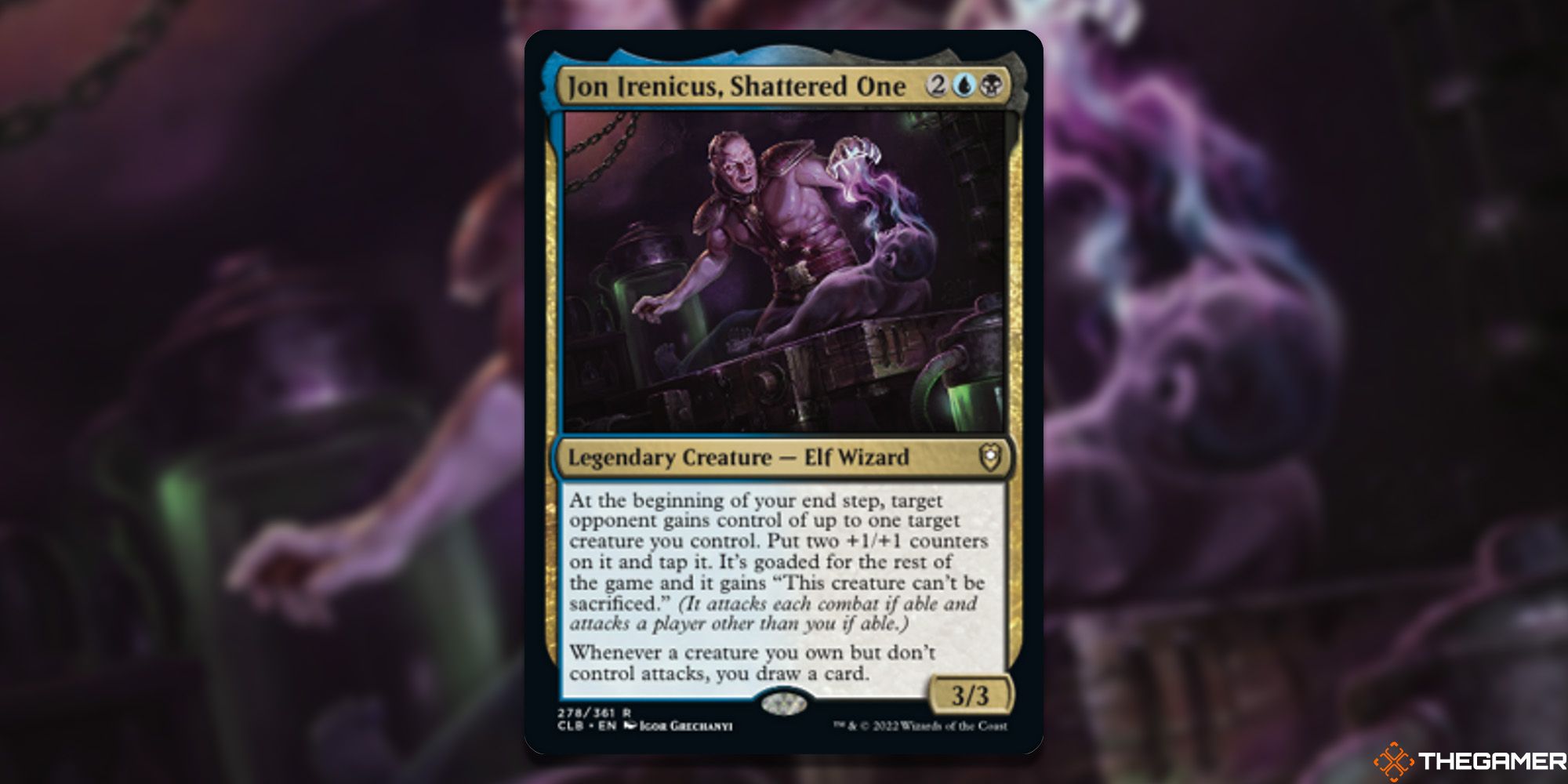 At the beginning of your end step, target opponent gains control of up to one target creature you control. Put two +1/+1 counters on it and tap it. It's goaded for the rest of the game and it gains "this creature can't be sacrificed".

Whenever a creature you own but don't control attacks, you draw a card.

We knew goad was going to be a big part of Battle for Baldur's Gate after it was made a Commander Evergreen keyword earlier this year, but Jon Irenicus combines it with forcing a creature into your opponent's control to make a really interesting new Dimir (blue/black) commander.

While the temptation is to give your opponent creatures with downsides, like Takenuma Bleeder, there aren't a whole lot of them. Instead, you want to give them creatures with devastating attack triggers, like Bane of Bala Ged, Colossal Whale, and Fleet Swallower. You should also stock up on attack-punishing cards such as Revenge of Ravens, Marchesa's Decree, Calculating Lich, and Blood Reckoning to help close out the game when it goes down to a one-on-one fight.