We’ve made it to the end of Magic: The Gathering’s gargantuan Commander Legends: Battle for Baldur’s Gate preview season. Over the last week and a half, we’ve seen a set that, while lower power than its predecessor, is still full of exciting and quirky cards for your Commander deck.

The final day of previews didn’t have any new commanders or backgrounds, but it did introduce us to a few cards that could become widely played in a number of formats. An Elder Dragon that can produce up to 20 flying tokens, a puzzlebox that is easily broken for an endless stream of charge counters, and a potential new Pauper staple headline day ten of Battle for Baldur’s Gate’s previews. 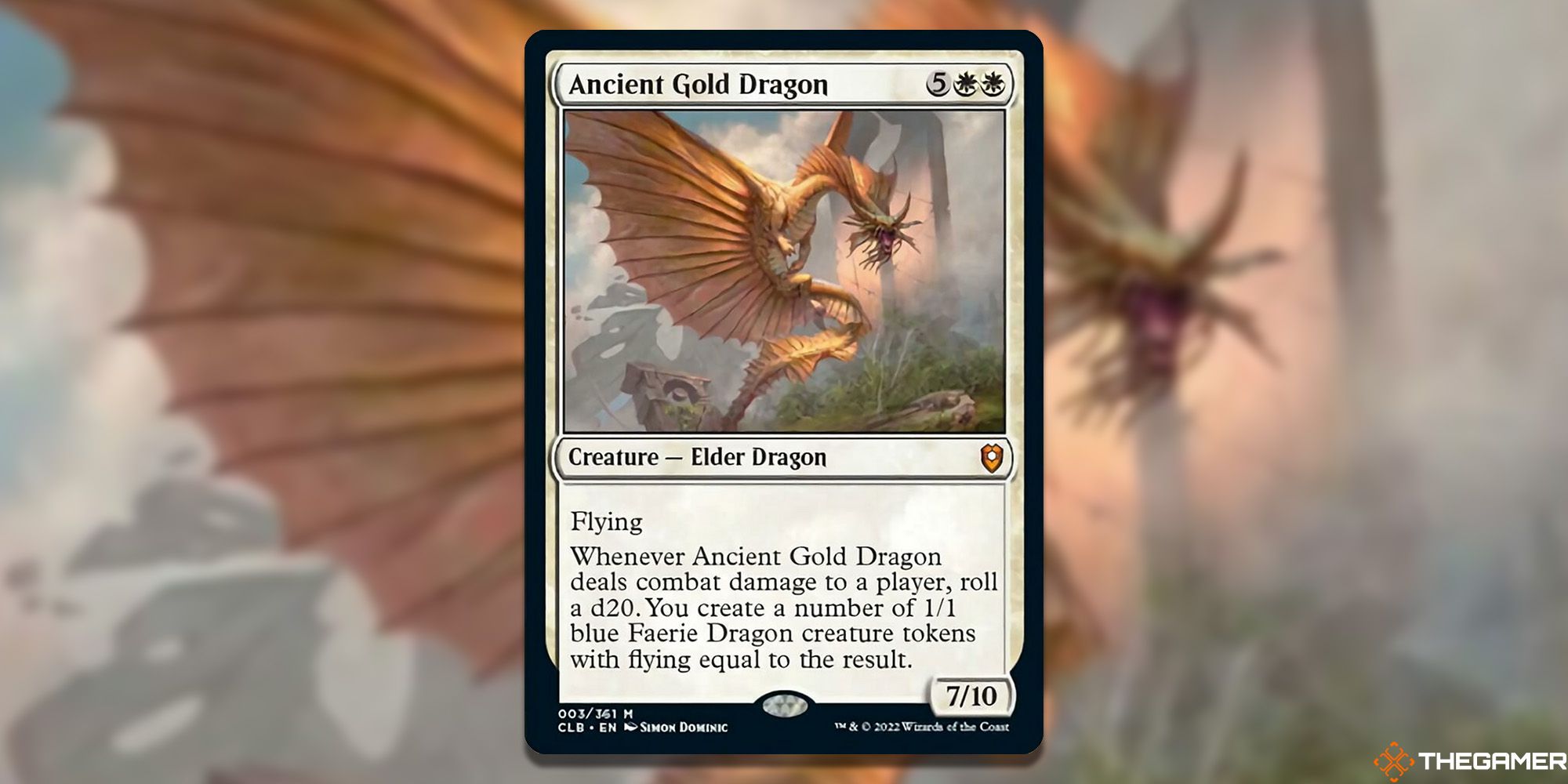 Whenever Ancient Gold Dragon deals combat damage to a player, roll a d20. You create a number of 1/1 blue Faerie Dragon creature tokens with flying equal to the result.

The final member of the Elder Dragon cycle in this set does one of the things white does best: go wide with lots and lots of weenies. It isn’t the best effect in the cycle (especially not with Ancient Bronze Dragon making you on average ten Treasure tokens each turn) but the fact the tokens it makes are flying does earn Gold a few brownie points.

Even without the tokens, seven mana for a 7/10 flier is nothing to turn your nose up at. This Dragon is a meaty attacker and blocker in its own regard.

You’re going to want to pack some token doublers such as Anointed Procession, or enough creature enters-the-battlefield effects to benefit from that mass of Faerie Dragons entering. Fortunately, we just had Streets of New Capenna and its alliance mechanic, which will synergise perfectly. Divine Visitation is a particularly good card for Ancient Gold Dragon, as it can turn those 1/1 Dragons into 4/4 Angels instead. 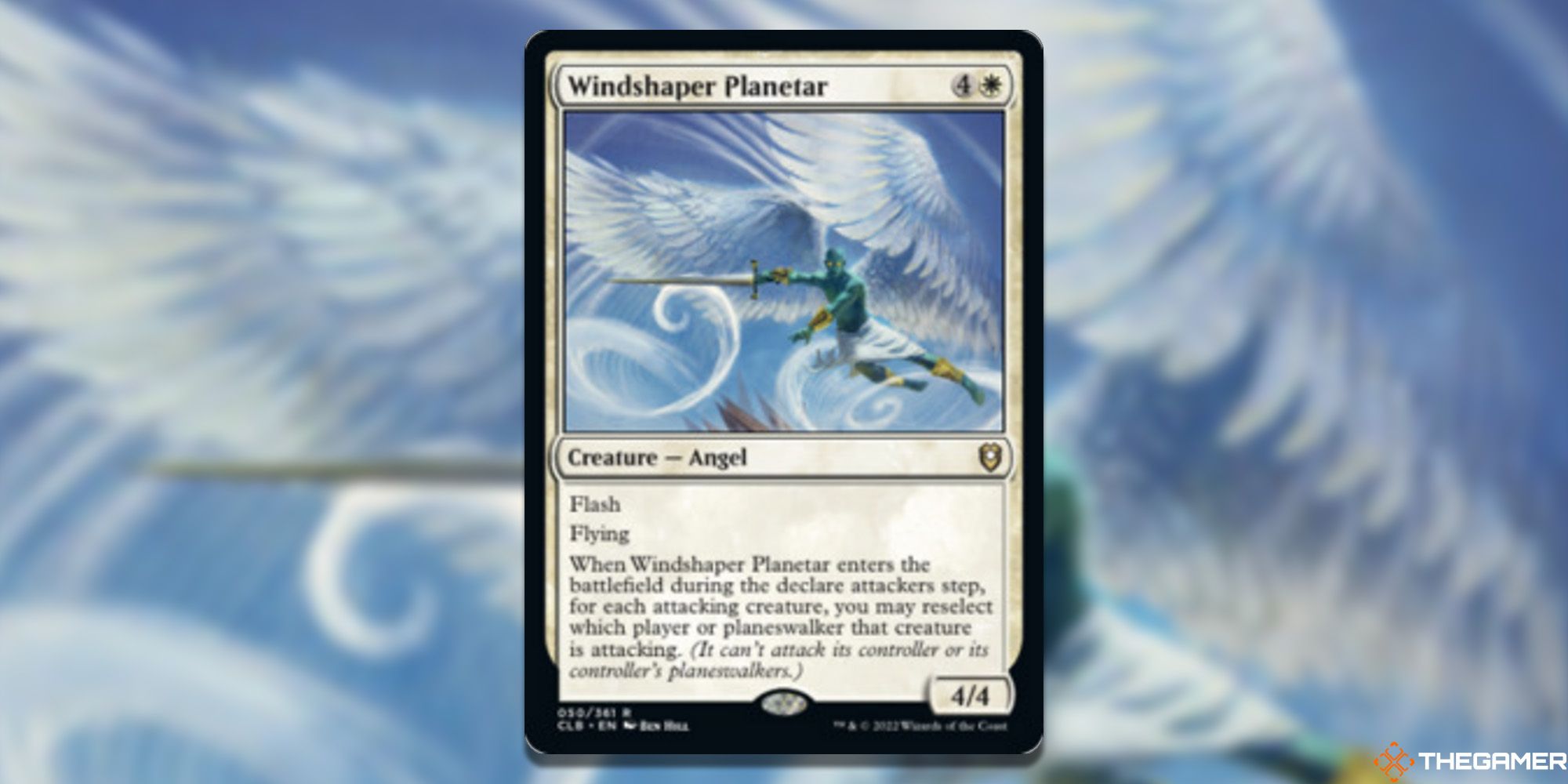 When Windshaping Planetar enters the battlefield during the declare attackers step, for each attacking creature, you may choose which player or planeswalker that creature is attacking.

This set doesn’t have a lot of ways to counteract the effects of goad, but Windshaping Planetar comes kind of close. Flash this in during the declare attackers step, and at least you can redirect a goaded creature that was otherwise coming at you. While you can’t declare more attackers than those that are already out, this is a good way to dodge bullets and potentially break up political alliances you’re not a part of.

Holding five mana to flash in a creature on someone else’s turn is a big ask, but there’s nothing that says you can’t blink this every turn to keep your enemies at bay. In an Azorius (blue/white) deck you’ve got one of Baldur’s Gate’s best cards available to you, with Displace Kitten able to re-trigger that ETB just by casting any other spell. Any blink deck will absolutely love Windshaping Planetar, but that power also makes it a potential kill-on-sight for your opponents.

Your Temple Is Under Attack 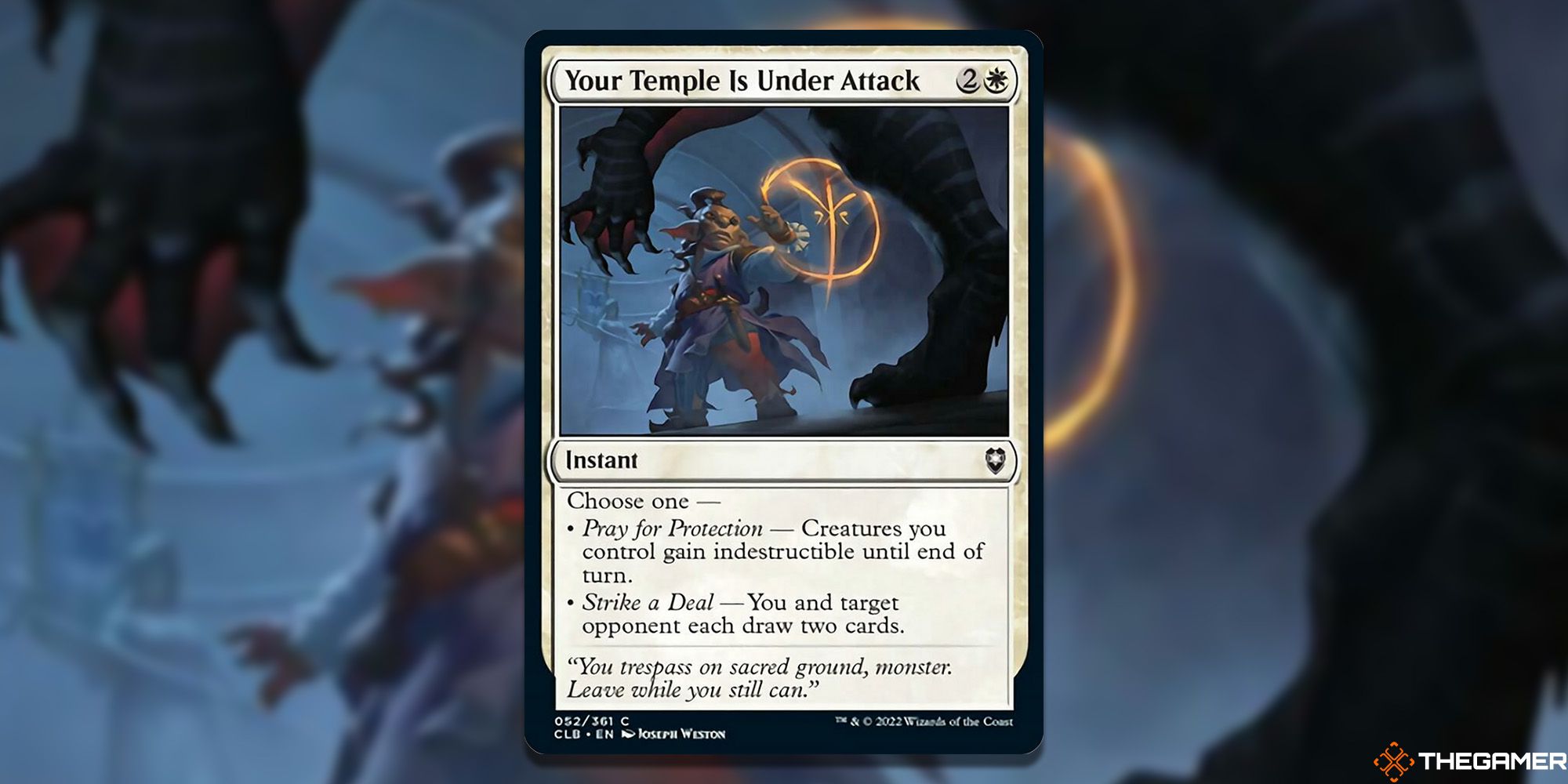 The final day of previews gave us some great common spells, such as Your Temple Is Under Attack. It’s not quite a Heroic Intervention, but it is on par with other decent spells like Unbreakable Formation, Grand Crescendo, and Flawless Maneuver, which are all rare cards that grant your creatures indestructible for a similar mana cost.

There’s also some cool political play on offer with the Strike a Deal option. We’ve seen how effective this kind of shared draw effect can be with the card Secret Rendezvous from Strixhaven. Having this in the bag to dissuade an opponent from coming at you could be just as effective as making your creatures indestructible would be. 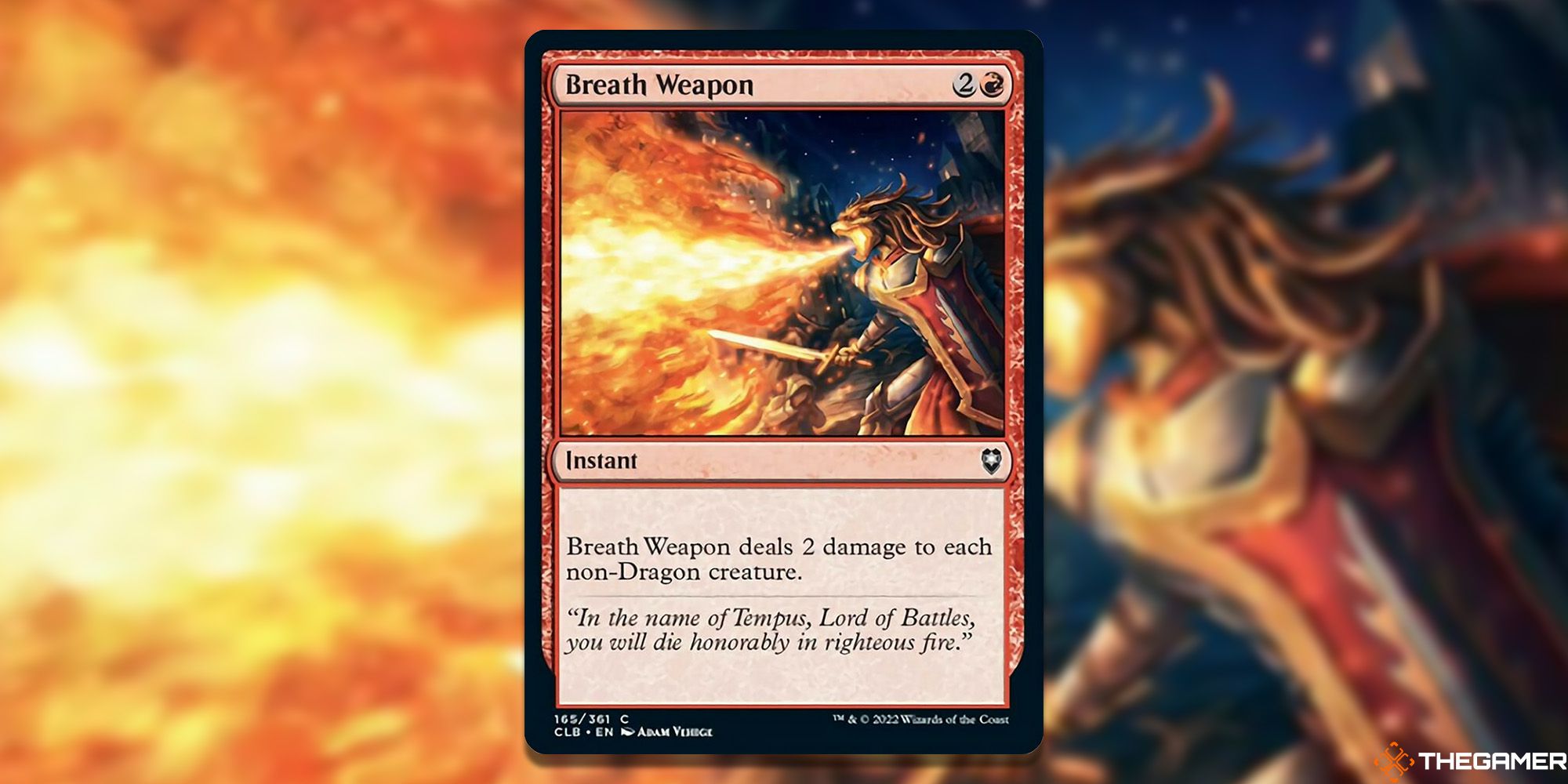 For Commander, this is draft fodder. It’s a perfectly fine Dragon tribal pseudo-board wipe, but nothing to particularly write home about. Maybe if you combine it with a Torbran, Thane of Red Fell and a Fiery Emancipation to buff that two damage to nine it’ll be more interesting, but even then, why would you bother with Blasphemous Act right there?

This card is a highlight not for Commander, but for Pauper. The commons-only format lacks many decent board wipes, leaving damage-based potential wipes much more popular. In fact, one of the format’s most popular spells is the previous Commander Legends set’s version of this card, the Pirate-themed Fiery Cannonade.

It’s unlikely that Breath Weapon will be quite as popular as Fiery Cannonade, as Pirates are a slightly more popular creature type in the format with more representation. On the other hand, Breath Weapon will actually hit all those Pirates, so maybe it’ll be a better choice for non-Pirate decks wanting to take out the swashbucklers their opponents are running. 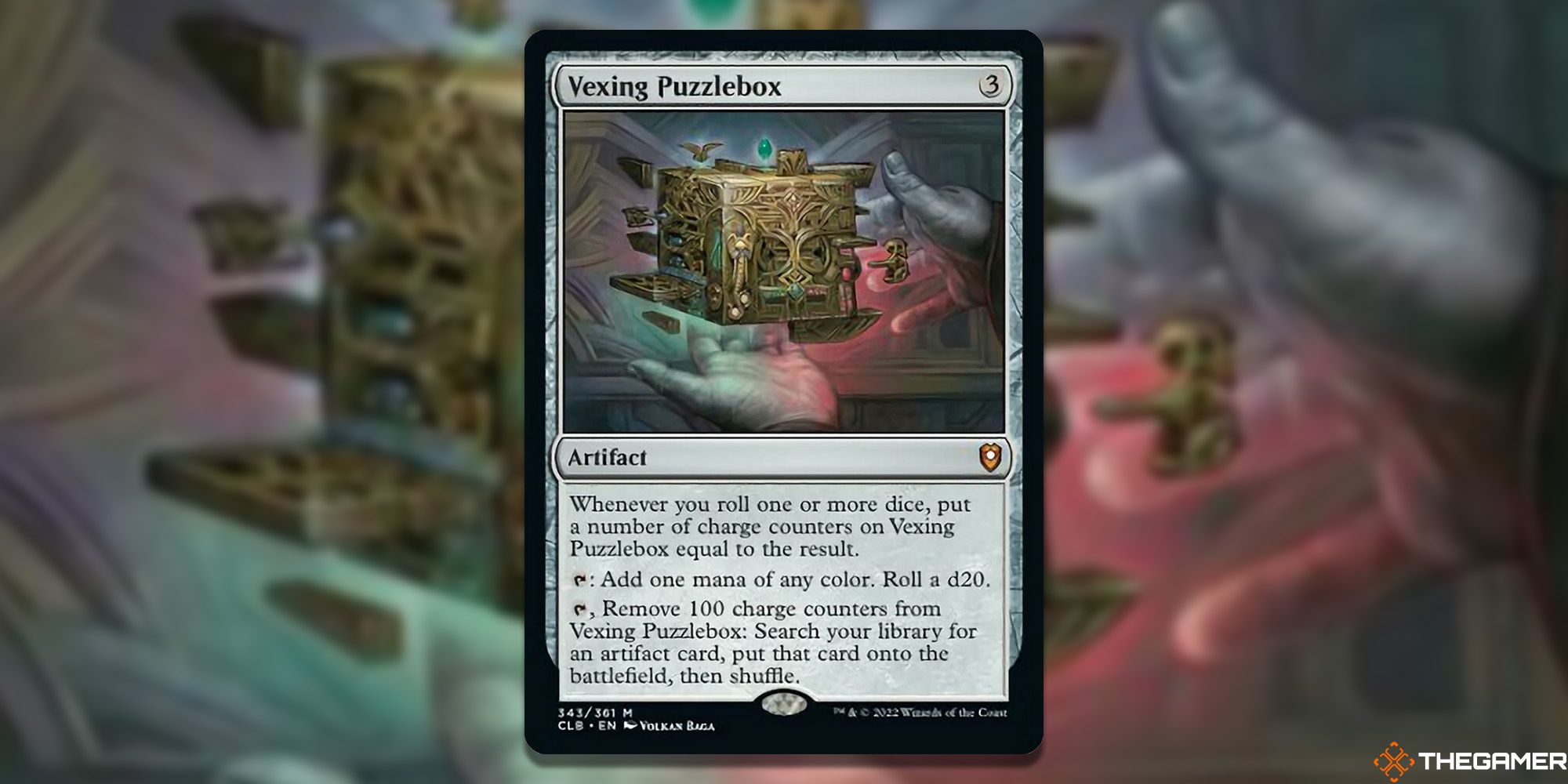 Whenever you roll one or more dice, put a number of charge counters on Vexing Puzzlebox equal to the result.

Tap Vexing Puzzlebox: add one mana of any colour. Roll a d20.

Tap Vexing Puzzlebox, remove 100 charge counters from it: search your library for an artifact card, put that card onto the battlefield, then shuffle.

This unassuming little box is easily one of the choice cards of the entire set, and finally turns dice-rolling from a chaotic playstyle into a more focused, threatening deck. Building up to 100 charge counters isn’t going to be too difficult either with how many dice rolls you can do at instant speed, especially if you pack something like a Vorinclex, Monstrous Raider or Doubling Season to double the amount.

Though searching for an artifact and putting it onto the battlefield is awesome, there is another way you can use this. Charge counters are used on many cards and so with a Resourceful Defense, Vexing Puzzlebox becomes a generator to dump huge numbers of charge counters onto anything. You could gain ridiculous amounts of life with Clearwater Goblet, produce mana in the hundreds with Everflowing Chalice or Black Market, or simply buff up your tribal deck with Door of Destinies to close out the game. 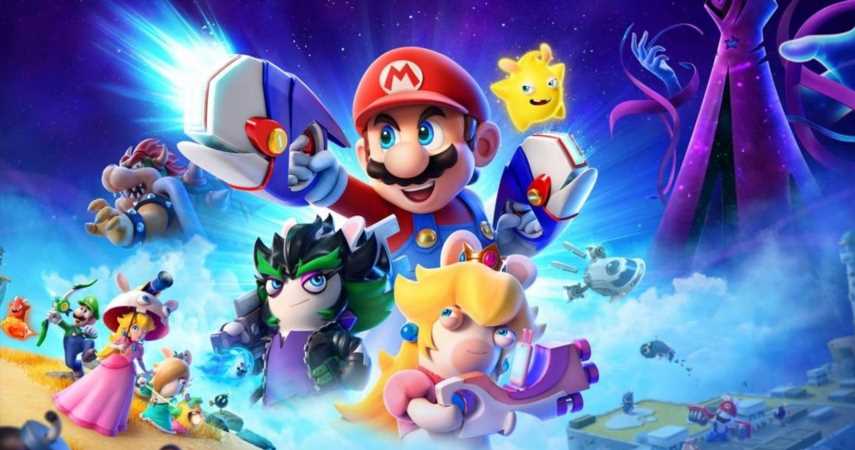 Mario + Rabbids: Sparks of Hope Will Feature Score From Some Of Gaming’s Biggest Composers 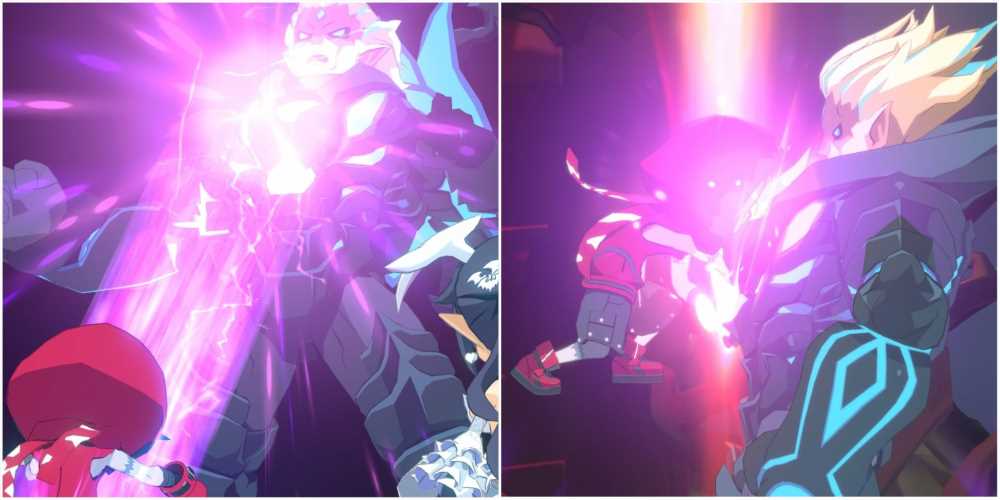 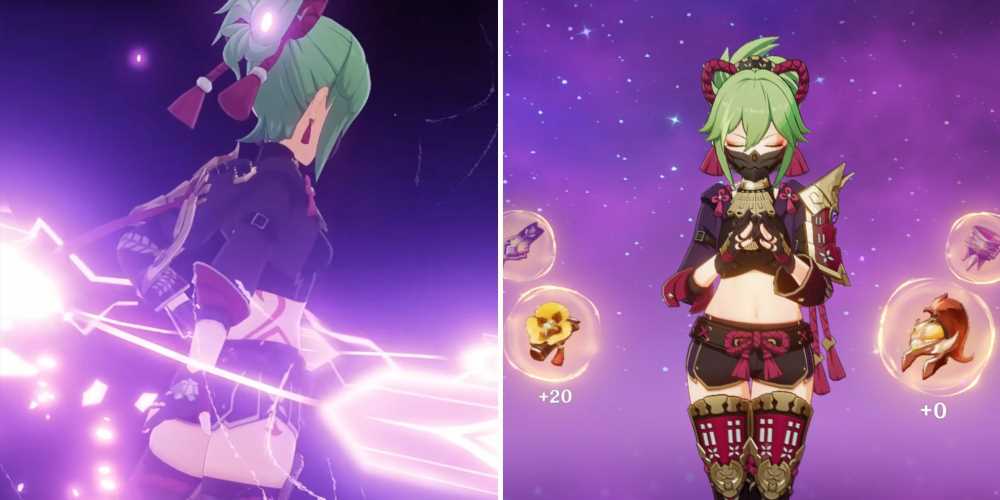