Home » News » The Coolest Things We Saw In Cyberpunk 2077

The Coolest Things We Saw In Cyberpunk 2077

Cyberpunk 2077 is already shaping up to be one of the standouts of E3 2019, which isn’t surprising considering how great last year’s demo was. Even though many of the basic questions about have been answered, we were looking forward to seeing more impressive gameplay moments, and CD Project Red did not disappoint. Over the course of our 50-minute demo, we saw cool stuff ranging from small details to big reveals, and these were the best of the bunch.

Character creation
Your character is simply named “V,” and you get the opportunity to shape their appearance in a character creation. Though we were already familiar with how this works in Cyberpunk 2077, it was cool to see more options, and impressive how well each variant captured the vibe of the cyberpunk genre.

Translation effect
In our demo, V is equipped with technology that allows for instant language translation. But instead of just flashing the text on screen in plain English right away, the display has a cool effect where the text is first displayed in an unreadable format, and then the characters quickly change in a wave from left to right. It isn’t so slow as to impede your reading, but it is slow enough to remind you’re in a diverse world that you can’t understand without some help.

Dialogue influence
The idea of certain dialogue options only being available to players who have made certain choices is an old RPG standby. What makes it interesting in Cyberpunk 2077 is the variety of ways that you can add those kinds of options. It isn’t solely about reaching a certain threshold in a core ability score. Depending on which backstory you’ve selected for your character (like growing up as a street kid, or having a corporate background) you might see different options. If you’ve invested in certain skills (like hacking), that can also open new conversation paths. This means the actions you’ve taken are frequently recognized and brought to the surface.

Stats
V’s capabilities in the world of Cyberpunk 2077 are determined by their ability scores. Those scores also influence V’s aptitude with a number of associated skills. The five core scores in our demo were: body, intelligence, reflexes, technical ability, and “cool” (which appears to be analogous to charisma in other RPGs). CD Projekt Red didn’t go into detail about everything these scores interact with, but the skill screen implied that a high reflex score might translate to increased proficiency with things like blades and handguns, while a high cool score influences skills called assassination and cold-blooded.

Following a trail
This is a world where getting what you want means talking to people, doing legwork, and picking sides. Though the demo didn’t fully illustrate how deep and immersive Night City is outside of missions, the degree to which you need to meet people and follow up on leads conveys a sense of living the cyberpunk lifestyle. You talk to a butcher (it’s synthetic meat; real meat is a luxury), and the butcher points you toward a local gang that can help you. The leader of the gang can give you information about a mysterious chip in your head, but to talk to the leader of the gang, you need to do a favor for one of her underlings named Placide, which sends you to a dilapidated mall full of maniacs. This progression from one phase of the story to the next feels organic; it doesn’t seem like you’re just blindly running from one objective marker to the next.

Uncertainty
Another neat thing about the natural flow of the story is that it puts you in a lot of conversations. This means you get to know a lot of characters – but you don’t know what everyone is really after. For example, when you raid the mall full of maniacs we just mentioned, you do it because you assume it will get you a face-to-face meeting with Placide’s leader. That’s what you were promised…but was Placide lying? Yes, according to a government agent charged with regulating the ‘Net who confronts you later. Both sides of the story seem plausible, so who do you trust? This kind of uncertainty can be thrilling, as long as you don’t mind living with the consequences.

Clever dispatching
If you like devising fun and unconventional ways to take down foes, this game is for you (even though you technically don’t need to kill anyone). We saw V find all sorts of inventive ways to eliminate the opposition. You can toss people down trash chutes, use them as human shields, and grab turrets to turn them on the enemies. In a couple fitness-related kills, we saw V hack into a boxing robot to punch the head off its opponent. V also hacked into a bench press while someone was using it, resulting in a grim fatality. Is it gruesome? Yes, but it’s also rewarding.

Nanowire
This thin glowing strand (which looks like that awesome laser whip from Johnny Mnemonic) is both a tool and a weapon. We saw V sneak behind a couple of bad guys while brandishing the nanowire, and with a quick flourish, the enemies were on the ground. However, V can also use the nanowire to hack and plant malicious code from a distance.

Cyberspace
In a great flourish near the end of the demo, V gets taken to cyberspace – a digital landscape that is a core concept in some foundational cyberpunk inspirations (like William Gibson’s Neuromancer). Right now, this element of the game is full of potential; almost anything is possible in cyberspace for people with the right aptitude, and it seems like V’s quest will inevitably send players on at a least a few jaunts into this mesmerizing realm.

Keanu Reeves
Yeah, that reveal was awesome. But his character, Johnny Silverhand, is also interesting. He’s a key figure from the Cyberpunk tabletop game, but in 2077 he’s a digital ghost who hangs out with V for the whole game, and seems to important to V’s journey. We may not have all the answers, but we’re still intrigued. 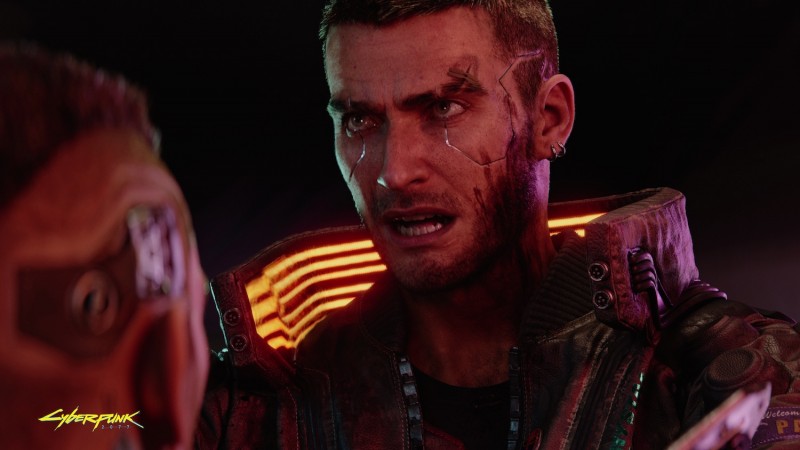 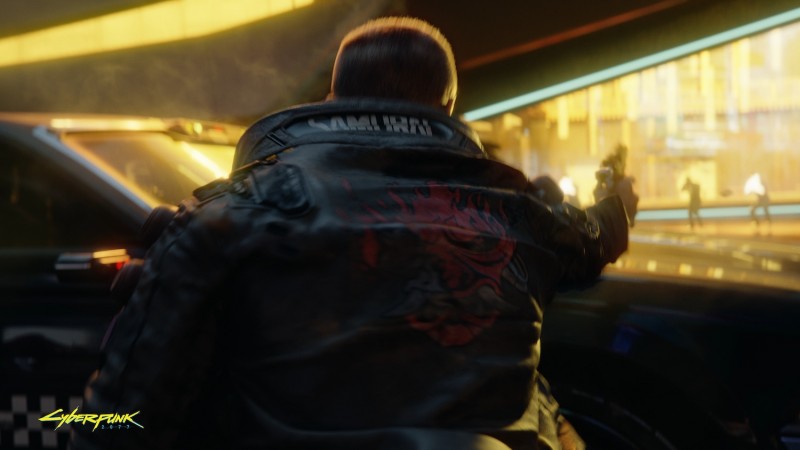 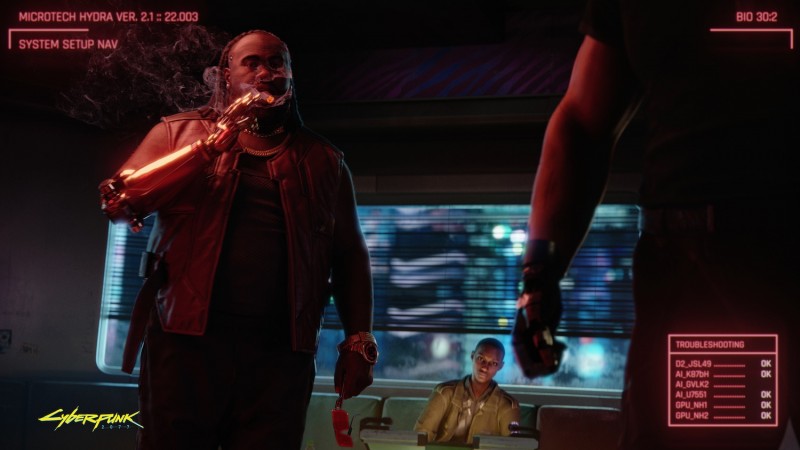 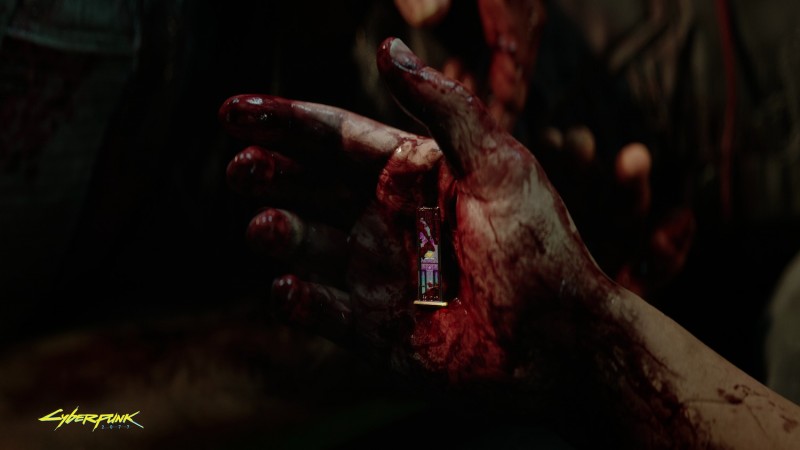 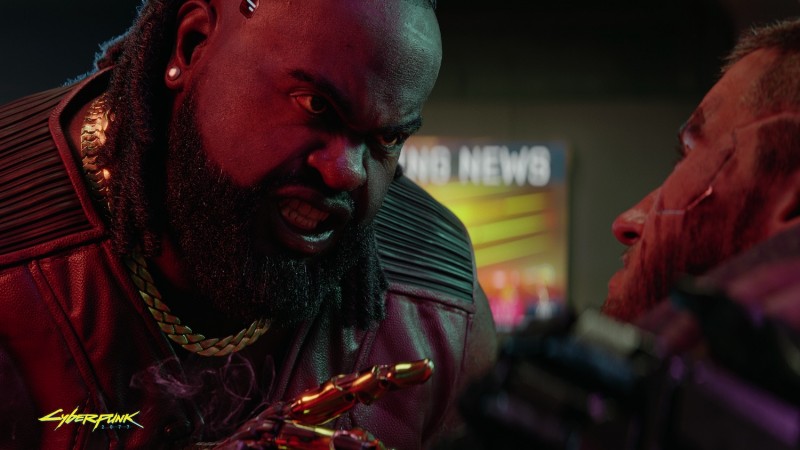 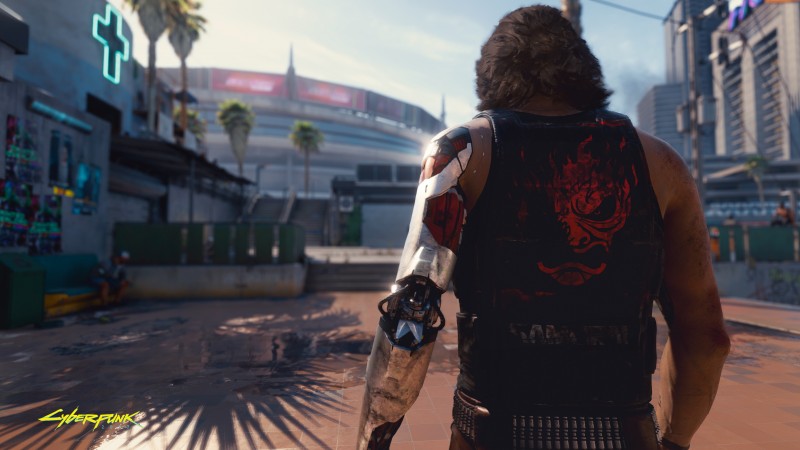