The Division 2's Level Design Is Its Secret Weapon

I like open-world games a lot. The Witcher, Red Dead Redemption, Grand Theft Auto, and Breath Of The Wild all rank among my favorite games of all time. However, there’s a pretty common problem among the vast majority of open-world games. Let’s call it the parking lot issue. And what the parking lot issue pans out to is that the vast majority of these sorts of spaces are often given over to wilderness. It’s wilderness that sporadically populated by clusters of civilization like villages or cities, but it’s basically just a vast playspace in which to drop quests, enemies, and dungeons.  So there’s the part of the game where you’re out in the open world, and then there’s part of the game where you’re in one of its dungeons or mission-related locations. It’s rare that these two flow into one another with a natural transition.

Enter The Division 2. I did not care for the original game. I thought the shooting was bleh, couldn’t get past unarmored plumbers somehow still standing after four shots from an assault rifle, and I’ve never really jived with the writing that accompanies the Tom Clancy brand of games. However, within a couple of hours of playing The Division 2, it became apparent that this game was pretty special and not because of its main, co-op focused selling point. I mean, make no mistake. I enjoyed coordinating attacks with my fellow editors, overpowering legions of foes with carefully placed turrets and Hail Mary grenade throws. However, what I actually love about the game can be enjoyed (arguably more so) in solo play. 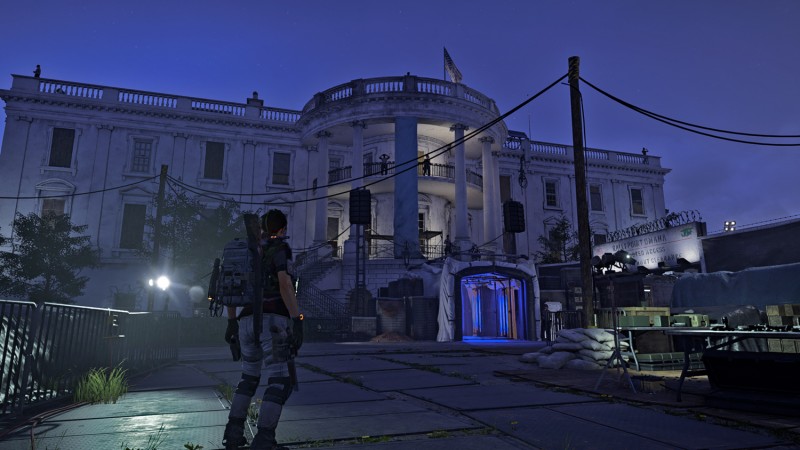 The Division 2 excellently endows a sense of place in the player. Not just because its rendition of Washington D.C. is accurateish, but because it has a great connective tissue that makes the world feel like it functions as one. An example: I was once got in a firefight with a group of soldiers in the middle of the street. The fight seemed to be going my way but then their backup showed up, quickly overpowering my drone and turret. I immediately retreated into a nearby blown-out convenience store to try and buy time for my gadgets to recharge.  However, enemies quickly swarmed the front so I ran out of the store through a backdoor, into an alley, and then into a nearby office building with a stairwell that led up to a hallway with a broken window. From there, I fired on the soldiers as they flooded the alleyway and when my gadgets finished recharging, I just decimated every single one of them.

To be clear: this was not a mission in the game. This was a just a random battle that quickly escalated into something memorable because the playspace design here is capable of letting the player create natural, smooth transitions. It’s the video game equivalent of a tracking shot you might see in Goodfellas, Children of Men, or True Detective. Open-world games are exciting, after all, because they have a habit of making the player largely the director of the action that happens in the game. To have a playspace that players can mold to create exciting, memorable scenarios is paramount to good game design. That so many of the greatest open-world games of all time lack compelling spaces speaks to the growth the genre still has to do.

The Division 2’s playspace stands out not just because it has a lot of interiors you can duck into during battle, but because the game goes to great lengths to make the city truly feel like a city. The vast majority of missions in the game lead you to government buildings and monuments and museums that don’t just get lip service or are hastily assembled arenas with some nods to iconic architecture. No, they’re actual multi-level structures you have to navigate. And all of them feel like their own unique place in the world. No hallway ever looks like another. Every building has unique pieces of art related to whatever the structure is. Moreover, all the connectors between these locations help make the world feel natural. There’s an almost immersive sim-level of choice given to the player when it comes to navigation. Sure, you can run along the street to get from one place to another, but there are also alleyways and sewers you can sneak through, most of them filled with secret stashes of loot, if you so choose.

Of course, The Division 2 isn’t the first sort of game to do this structure.  Both Batman: Arkham City and Dying Light are also superb games at creating playspaces that marry huge open spaces to detailed interior levels in a way that creates a work that operates as strong singular world, one where the structure doesn’t create immersion-tampering divides or long lulls in dullness as you traverse open plains to get from point a to point b. However, that natural balance is still so shockingly rare that honestly feels like a revelation whenever I do play a game that manages to nail it.

So yes, The Division 2 is a fantastic multiplayer title (check out our review for more on that). However, it’d be a shame if this open-world didn’t get some praise for the subtle brilliance that even so many of the classic staples of the genre lack.

For more on The Division 2, check out our Funny To A Point column about the game here.