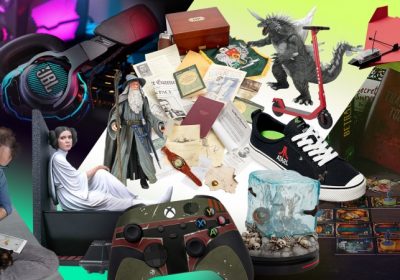 It’s been a rough couple of years of schooling for anyone forced to persevere through recent challenges. If you have a gamer in your life who has reached the finish line, we have some suggestions for gifts that can make them smile after they walk the stage and pick up their diploma.

Disclaimer: Recommended products are selected by our editorial team, independent of our parent company, GameStop

JBL’s premier wired gaming headset is no slouch, offering an exceptionally robust selection of features well suited to the newest generation of hardware. The spatial audio effect is enhanced since you can drown out surrounding audio clutter with active noise canceling, and made incredibly immersive thanks to a snazzy head-tracking feature. Music and sound effects alike are punchy and accurate across the full spectrum of highs, mids, and lows, with an uncommonly satisfying bass. The included removable boom mic sends voice through loud and clear. In short, it’s a pricey entry into the competitive gaming headset market, but one that shouldn’t disappoint. Compatible with almost anything via 3.5 mm audio jack, but most valuable when paired to a PC for full feature inclusion. $299

The Mystery of Hunter’s Lodge

For the mystery buff

Some of the best gifts are experiences, so why not reward your new grad with an immersive night of puzzle-solving and unsolved questions? Mystery night games have been around for a while. But this Agatha Christie classic has been adapted with an eye toward an especially intriguing adventure. From a locked chest to a wristwatch, extremely high-quality props elevate the experience above the standard fare. If a mix of role-playing, party game silliness, and mystery-solving sound like a good fit, this is a murder worth solving. $189 (Collector’s Edition), $99 (Retail)

For the fantasy enthusiast

You shall not pass up this detailed likeness of the seminal wizard as he appeared in the celebrated film franchise. Gandalf the Grey may have enjoyed a relaxing pipe in his free time, but when threats arise, his included staff and sword, Glamdring, are more than adequate to defend the Fellowship. The 7-inch scale figure has 16 points of articulation to nail that perfect pose. $29.99

Best known for the company’s iconic childhood wagons, Radio Flyer has made some significant strides into the adult market in recent years, including this slick e-scooter. Capable of hitting up to 16 mph, the compact scooter is a perfect gift, whether your grad is headed off to another sprawling college campus or moving into their first place in the big city. The rechargeable battery has enough life to take a rider over 15 miles on a charge, and wherever they stop, the whole thing can fold up for easy carrying. It comes in three colors; white or black is fine, but why wouldn’t you go for red? $599

Meta Quest 2 is our most advanced all-in-one VR system yet. Get the most out of each moment with blazing-fast performance and next-generation graphics. Stay focused with a stunning display that features 50% more pixels than the original Quest. Or take a break from the action and grab front-row seats to live concerts, exclusive events, and more! No PC or console required. $299

Driven by premium sound and designed with a custom acoustic platform, Beats Studio Buds are engineered to deliver powerful and balanced sound in a compact, in-ear form factor. $119

Provides up to 77 hours of additional battery life for your smartphone. Charge any device, including tablets, wireless earbuds, portable speakers, eReaders, and more. $49.99

This GameStop Exclusive goes where no coffeemaker has gone before, brewing hotter, faster and better-tasting coffee than most machines out there; brews an 8 oz. cup in less than 90 seconds. $22.49

Based on the traditional Sangheili melee weapon from the Halo franchise, this LED desk lamp is powered by USB, which means it looks sharp plugged into your gaming rig or your office computer. When lit, it puts off the distinctive glow of the formidable weapon, ready to inspire, intimidate, and impress Halo fans. $59.99

Fully immerse yourself in the amazing aerial views and unbridled speed of drone flying with the combo version of the DJI FPV Drone. Using the bundled FPV Goggles V2, you get a first-person view of what the drone sees, with footage that makes it feel like you’re the one flying through the sky. The onboard 4K 60fps gimbal camera can send low-latency video to your goggles for a near real-time experience. The 150-degree super-wide FOV lets you take in and appreciate the scope of the vistas you fly over. $999

For the D&D player

You’ve got a role-playing gamer in your life, but you’re not in on the fun, so it might be a mystery why a transparent ooze is an exceedingly clever gift. This iconic monster hunts its prey through dungeon tunnels, snatching up everything in its path, and has been part of the Dungeons & Dragons game since its original 1974 incarnation. We can write the graduation gift card for you, and you can thank us later: “A reminder of your own insatiable hunger for knowledge!” You’re welcome. $59.99

For the high flyer

If the gamer in your life enjoys flight games, Power Up’s clever twist on the classic paper airplane should be a hit. This smartphone-controlled flyer can connect to almost anything you can fold up around its frame. It offers around 10 minutes of flight time, in-app controls for loops and barrel rolls, and an onboard computer that reacts to unexpected changes like shifts in wind direction. For a slightly higher cost, you can try out versions that use balsa wood or foam or select a bundle that includes all three materials so that you can find your preferred design. $69.99

For the sneaker head

Cariuma prides itself on a sustainable and responsible approach to shoes without sacrificing quality or wearability. Those traits are apparent in their new collaboration with Atari, which adds a little retro gaming flair to the team’s already excellent OCA design. The shoe leverages organic cotton and cork/mamona oil insoles for an extra comfy fit. Meanwhile, the various Atari-themed logos and designs recall those earliest days of home gaming. $89

Followers of the newest Star Wars adventures can settle into their crime lord thrones with this exquisitely designed homage to that most notorious of Star Wars bounty hunters. The wireless controller matches the familiar functionality of the standard, but careful detail work and textured surfaces add a premium feel. It’s a steep asking price for a standard controller and stand, even with the included rechargeable battery. But as a gift for a Star Wars devotee, the incredibly high cool factor of how this displays, especially as it sits on the shelf charging, makes it swoon-worthy. $179

Watch movies on the go! This projector delivers true-to-life color projections on virtually any flat surface. Two built-in stereo speakers deliver powerful audio, and the Bluetooth receiver allows you to connect to other devices. You can project up to a 150 in. picture size, and this projector supports 1080p (via HDMI input). Built-in lithium battery. Accessories include a remote control and AC power adapter. $118.29

This all-in-one complete gaming bundle includes everything you need to take your gaming to the next level including an Apex 3 Gaming Keyboard, Rival 3 Gaming Mouse, and QcK Medium Gaming Mousepad – all in one box. $59.99

In addition to providing single and multiplayer thrills at home, the Nintendo Switch can be taken on the go so players can enjoy a full home console experience anytime, anywhere. $299

FromSoftware’s latest action/RPG and largest game to date, set within an open world of mystery and peril. Explore an open world rich with magic, ruins, and perilous combat! $59.97

Luke and Leia’s first meeting aboard the Death Star is commemorated through this striking likeness, which shows the Princess as she casts a wary eye on her rescuer. The sculpting is top-notch, with detailed paintwork that brings out the classic character as she appeared in the 1977 film. The included mouse droid is a lovely bonus. It may be a little short for a stormtrooper at roughly 10 inches in height and 1/6 scale, but she’s perfect for your grad’s shelf. $200

If the secrets of cubing have always been elusive, the 2×2 GoCube is an awesome way to explore the hobby, especially for beginners. The cube has light-up options, smooth turning mechanics, and pleasing curved corners. But it’s the digital connection to its free app that really layers in fun, as it can track the cube’s rotations in real-time, gradually teaching its secrets through tutorials, games, and stats. If Rubik has ever daunted someone, this guaranteed path to a solution is incredibly satisfying. $49.99

For the computer specialist

If your graduate complains of too much to juggle on their single small laptop monitor, the Duex Lite is an excellent option for expanding the visual space with which they have to work. The attachable monitor slots onto the side of an existing laptop, and connects instantly via USB-A or USB-C connector. The 1920×1080 monitor is ideal for all the extra info or programs they want to run and stay connected to, even while their primary monitor handles games or other core tasks. You can have it attached directly to the side, or set it off to the side in either landscape or vertical portrait format. It’s highly portable, easy to set up, light in weight, and low on complications – a handy addition to any laptop user’s setup. $259.99 (12.5″)

Betrayal At House On The Hill: 3rd Edition

One of the most celebrated and approachable board games of the last 20 years is releasing a new edition. Players work together to navigate a horror-themed story as they infiltrate a mysterious (and often haunted) house. Inevitably, one of their companions turns out to be a traitor, and it’s a race to the climactic conclusion. Fifty included haunts (scenarios) keep the experience fresh each time you play. Improved minis and other components look great, but the clever changes to rules and presentation make this edition a winner and notably welcoming to new players. $55.99

For the monster movie lover

A clear labor of love crafted by lifelong kaiju movie fans, the Titanic Creations figures feature original designs that equally recall Godzilla and Cthulhu aesthetics. The first monster in the line, Titanicus, is a bristling dinosaur-like terror, while Nosferadon is birdlike and clawed. Original and intricately sculpted, the limited articulation is more than enough to set some awesome poses. $30 (apiece)

For when you just don’t know

If you’re sure you’re gifting to a dedicated gamer, but you don’t know about their habits or preferences, it’s almost impossible to go wrong with Xbox Game Pass Ultimate. The subscription service offers access to dozens of great titles, including first-party Xbox games like Halo: Infinite, as soon as they come out. With the Ultimate tier, players can log in on their Xbox console, PC, or even try out cloud gaming on their mobile phone. And since you can customize how many months you gift, and it works for either new accounts or as an add-on to their existing subscription, it’s a pretty full-proof delivery of fun times. Xbox put together a robust subscription offering with Game Pass Ultimate; if you don’t know what else to get, this is a good fit for almost anyone engaged with the gaming hobby. $14.99/month

This article originally appeared in Issue 346 of Game Informer.