The Last of Us Part II swept many of the honors at The Game Awards tonight, including Game of the Year. It’s a fitting result for an ambitious game from the Naughty Dog studio, where hundreds of developers labored to make the sequel to 2013’s The Last of Us.

The Game Awards, organized by Geoff Keighley, have become the biggest night for gaming of the year, with last year’s audience hitting 50 million viewers. That’s more than enough to overshadow the Academy Awards, and it brings to mind game developer Josef Fares’ words in 2017: “F*** the Oscars.” The award for Sony’s exclusive game on the PlayStation 4 is timely, as it will remind everyone that Sony has led the charge for story-based single-player games that take the art form to a new level. That’s an important feather in Sony’s cap as it launches the PlayStation 5 in competition against the Microsoft Xbox Series X/S.

The original game, The Last of Us, moved over 17 million copies, generating more than $1 billion at retail. I’ve often had to explain why this game is my favorite of all time. I suspect Part II is selling in the tens of millions as well. It got a huge amount of attention when it came out this summer, and that conversation continued throughout the year, according to data from measurement firm Spiketrap. 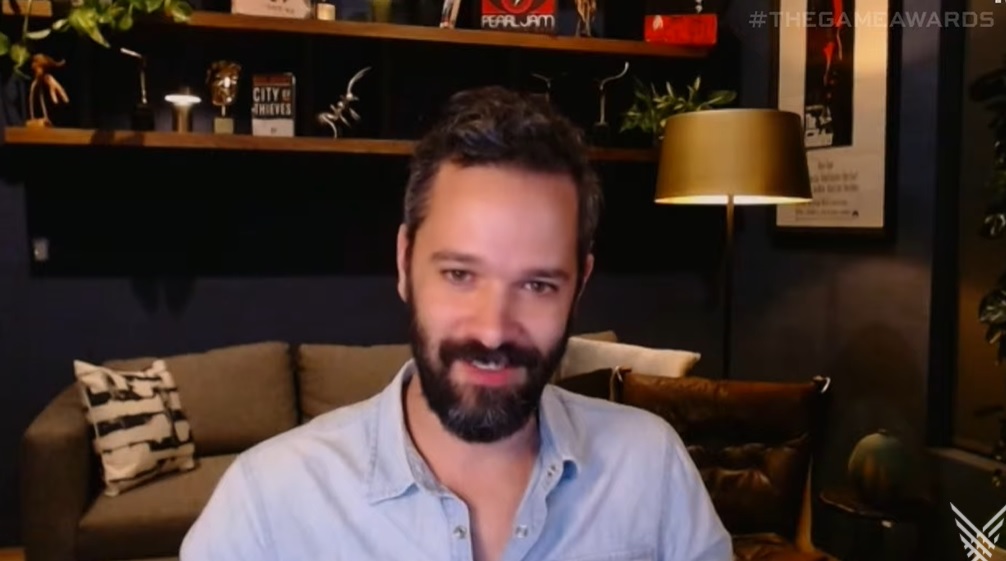 Above: Neil Druckmann, recently promoted to co-president at Naughty Dog, accepts Game of the Year at The Game Awards for The Last of Us Part II.

It was eerie playing a game about a post-pandemic zombie apocalypse during a pandemic, with emergency vehicle sirens going off in the background in real life. One solace was that I played this one together with my middle daughter, Danielle Takahashi, who was too young for such a serious game when the first one debuted in 2013. Back when we ran our review, Danielle and I put together this video, which she edited. Since the game is such a raw experience, I think it helps to talk about it after you play it, and we hope this story helps you understand it better.

I believe Part II reflects some amazing craftsmanship, riveting cutscenes, and empathetic storytelling. Developer Naughty Dog, its team, and the cast took a lot of risks in this ambitious sequel. As a result, they are getting love from fans as well as hate for the positive portrayal of lesbian, minority, and transgender characters. The game treats them all simply as people — they can be good or bad, in leading or minor roles. These design decisions are sparking heated conversations, something Naughty Dog had hoped would happen (at least in a respectful way).

I played the first game with my eldest daughter, and it was good to show her the character of Ellie at a time — even though it wasn’t all that long ago — when we didn’t see many female protagonists who were normal people (neither superheroes nor highly sexualized) and could handle their own. Back in 2013, and certainly before that, launching a game with a female protagonist was considered a commercial risk. That is no longer true, as a number of game companies have made a point of creating lead female characters.

Above: The Last of Us Part II has some pretty moments.

Ellie was a role model for my kids, and my second daughter avidly played through all of The Last of Us as well, as I watched and advised. I think a father and a daughter playing this game together could understand the bond between Ellie and Joel, even if the characters didn’t see it themselves.

Co-creator Neil Druckmann said the intention was always to have a story with dual protagonists, each with strong arcs that affected the other. It was not just a teenage girl being escorted on a mission by a middle-aged man. When my daughters played, I felt it was good for them to have the agency of being Ellie as she fought back during her crucible moments.

The Last of Us Part II continued this focus on diversity, intertwining it with the themes of the story. This mainstream game is a celebration of diversity, and it recognizes how much the conversation has changed since 2013, when the main thing that was inspirational about it was the recognition of father-daughter relationships. The second game normalizes characters who are lesbian and transgender, another groundbreaking step for a video game.

But the intensity and drama of the story, sustained over a very long tale, is what made The Last of Us Part II so good.

The Last of Us Part II pushes the logical conclusion of the first game to its end, and it asks if you can get justice and closure without sacrificing your soul. The Last of Us Part II represents the very best of what video games can be. I’m glad the industry and voting judges agreed. On Twitter, Druckmann quipped, “In the words of Ellie, that didn’t suck.”

Game of the Year

The Last of Us Part II (Neil Druckmann, Halley Gross)

The Last of Us Part 2 (Naughty Dog/SIE)

Laura Bailey as Abby, The Last of Us Part II