The Next Fortnite Event Has Leaked, Revealing Cinematic, Voice Lines, And More 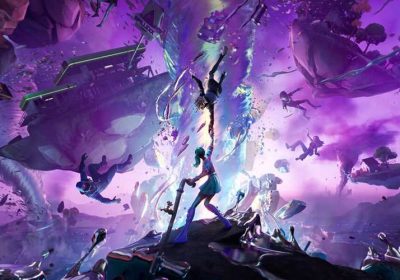 Fortnite's third chapter will come to an end this Saturday via what is likely to be a pretty spectacular event Epic Games has dubbed Fracture. Official details regarding what to expect when chapter three becomes chapter four are currently few and far between, but leaks have spoiled quite a lot of what's to come in Fortnite this weekend.

If you're readying yourself for Fracture and you don't want the event to be spoiled ahead of time, don't panic. We won't be spoiling anything here, but tread very carefully in the coming days if you follow any Fortnite news accounts. If you don't mind the event being spoiled, then the Reddit post below includes links to all of the confirmed and potential leaks so far.

The biggest leak of all is a sound file that runs for more than four minutes. The clip includes eerie music and also a number of voice lines potentially spoiling the event. The other confirmed leak includes what appear to be official sketches drawn up in preparation for Fracture. As for leaks that are yet to be confirmed, the word Reforged is being thrown around a lot with players assuming that will be the name given to the new season.

Fortnite leaks are nothing new, but these ones are on a different level. Usually it's details regarding a potential crossover, clearly not tied up in enough code for Epic to be all that concerned if the information gets out or not. The Fracture event details leaking out almost a full week before the event is a different matter entirely. In fact, it's believed an Epic employee on the inside is the one responsible for the information making it out into the wild.

Chapter 3 coming to an end almost exactly one year after it began is somewhat of a controversial decision by Epic in itself. Chapter one ran for two years, and chapter two was even longer. At just four seasons long, chapter three has been Fortnite's shortest chapter by far. Year-long chapters may well be the norm for the BR game moving forward.