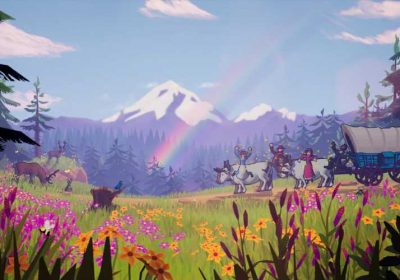 The Oregon Trail has a firm place in the history of the medium. It was one of the first popular video games, debuting at the tail end of 1971, with schoolchildren enjoying the challenge of having to decide what resources to spend as they tried to evade tragedy and successfully reach Oregon. It spawned sequels and the titles sold in the millions. Now, a revival of the classic, with updated visuals and mechanics, is coming to more platforms.

Gameloft's modern successor to the 70s game first launched on Apple Arcade, and after a period of exclusivity is coming to PC and Nintendo Switch. "At the end of November, you'll be able to play the cultural phenomenon on Steam, Nintendo Switch, and Microsoft Store!" the publisher announced.

This modern version of the game is much expanded on the original. There's a soundtrack featuring alt-country-inspired music in combination with 8-bit-style sound effects while there is also a new fishing mini-game as well as 15 playable journeys and seven quests. But this modern revival still sticks to the original experience, with "faithful gameplay" and hazards that those who played the 1970s title will recall.

"A modern twist on the trials and tribulations of the road to Oregon, this official successor to the global phenomenon will immerse players in exhilarating journeys ranging from the historically accurate to the totally extreme. Players will pick their traveling party, stock the wagon with supplies, and embark on an adventure filled with tough choices, new dangers, and unexpected situations," Gameloft's description reads.

The game features procedurally selected random events which means every playthrough should be novel, while players can adjust their party's starting items, skills, and personalities each time. Just remember to take care of the folks, the wagon, and beasts of burden otherwise tragedy will strike.

The original The Oregon Trail celebrated its 50th anniversary last year, while the game is also being adapted into a movie musical. Perhaps it'll feature the famous text "You've died of dysentery" but sung to a beat.