The Sims 4 Werewolves Are Officially Unveiled 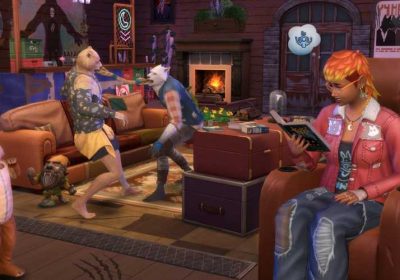 After two days of leaks, speculation, and criticism, The Sims 4 Werewolves Game Pack has officially been announced with a trailer. It is said to include a new world, Moonwood Mill, lycanthrope lore, and of course werewolves. Sims will be able to transform into wolves and experience wolf-specific events, as well as harbor some unique temperaments and abilities.

The werewolf game pack will see your Sims choose to fight or embrace their animal side, looking for a mate, a pack, or maybe just a fight in the dead of night. Whatever you choose, there's a new world to explore, lore to learn, and Werewolves to design from June 16.

The fast-paced trailer, set to Praying Mantis by Jazz Alonso, shows the brown-haired Sim from the cover art being chased and bitten by a werewolf pursuing her on four legs. The bite mechanic looks likely to work in the same way as vampire bites, allowing Lycan Sims to bring others into their pack. She sees weird things before discovering what looks like a werewolf club, where similarly afflicted Sims can gather together.

Transformations are shown in the trailer and appear to be linked to lunar cycles. This could mean they are controlled by the game, rather than the Sim. At the moment details are sparse, so we'll need to wait to find out more about the specific mechanics. However, we do know a few things.

The new world is called Moonwood Mill and includes a large mountain known as Howling Point. It appears to be a forest and mill type of town, with echoes of Granite Falls. We see Lycan Sims gathering at campsites and embracing the outdoors with bonfires, fights, music, and runs. According to the pack information these werewolves will have some unique abilities and personalities, likely following a similar system to vampires and spellcasters.

The last year has been sparse content-wise for The Sims 4 with the last expansion being Cottage Living way back in July 2021. Since then, we've mostly been given just a handful of kits. Alongside these February saw the release of My Wedding Stories and now Werewolves will be arriving on June 16.