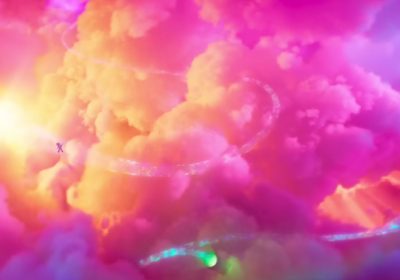 The latest trailer for The Super Mario Bros. Movie has shown the inside of a Warp Pipe for one of the first times in Mario history, giving us an idea of how they actually work.

Yesterday, Nintendo shared the second trailer for The Super Mario Bros. Movie, giving us a proper look at Peach, Luigi, Donkey Kong (well, all the Kongs actually), Yoshi, and more. Rather than showing two extended scenes like the first trailer, this second look was much more packed with detail and things to look out for, including some things that have interesting implications for the wider world of Mario.

Towards the end of the trailer, we see Mario and Luigi going through a Warp Pipe, presumably for the first time. While pretty much every Mario game ever has just shown a fade-to-black, Illumination has shown what it looks like on the inside of a Warp Pipe, revealing that it's some kind of pink dimensional space and that the pipes act almost like tractor beams between locations. Getting some heavy Steven Universe vibes here.

Of course, the name "Warp Pipe" has always implied that some kind of teleportation or warping happens when Mario and the rest of the gang enter a pipe, but we never actually get to see it happen in the games, especially not to this degree. In pretty much every Mario game, going through a Warp Pipe either has Mario instantly pop out on the other side, or a black screen transition is shown to indicate that he's gone through it.

The only game that shows anything close to this level of detail is Super Mario 3D World, which seems to be what this scene in the trailer is based on. During the intro of that game, Mario and friends go through an opaque Warp Pipe (one of the gimmicks of 3D World), which takes them through a world that looks incredibly similar to what we see in the trailer. There are still some differences (like the use of opaque pipes), but it's incredibly similar.

It's worth noting that although The Super Mario Bros. Movie is animated by Illumination, Nintendo has had a very big hand in its development and would have had to approve what Warp Pipe travel looks like in the movie. Considering that and the similarities between it and 3D World, it seems to indicate that this is the closest thing to canon Warp Pipe travel that the series has seen so far.