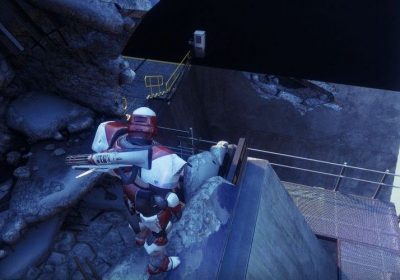 The Destiny universe is filled with easter eggs and secrets, some of which even veteran players may not be aware of. One such secret can be found in The Tower, and may have been right under our noses all this while.

The Tower, as any Destiny 2 player will know, is essentially the Guardians’ base of operations and the game’s main social hub, where you can track bounties, visit vendors, and initiate other activities. It’s a sprawling space where you’ll find the likes of Zavala, Ikora, and Lord Shaxx. It was destroyed by the Cabal at the start of Destiny 2 and rebuilt after the events of the Red War.

Bungie has been known to incorporate numerous secrets into this social hub right from the first game, including funny intercom announcements, hidden collectibles, and a very dedicated janitor bot. However, this latest secret discovered in the Hangar section of The Tower may just be the best one yet.

Redditor iwannaburger noticed a small sign in the Hangar which reads, “Days Without Incidents”. Many of us may have noticed it and carried on, but this Redditor realised that the number of days on the sign actually changes based on Guardian deaths in The Tower. While you can’t actually die in the social space, there is a chance of you falling off one of the platforms; it seems that every time this happens, the number of days on the sign reduces by one. Additionally, if nobody in the lobby falls off the platforms for 20-30 minutes – which roughly represents one day in the game – the number on the sign will go up by one.

This is just one of the many little secrets that Bungie has worked into the game. But what happens if the days without incidents were to reach a certain number? Would it unlock a hidden trophy? Would everyone on the server receive a reward?

Naturally, fans came up with their own predictions, with one of them saying, “Maybe this is what Truth to Power was talking about. Reach 999 days without incident to unlock the true ending ending [sic] of The Dreaming City.” Others estimated how long it would take to achieve such a feat, “It would take between 13.8 and 20.8 days to reach 999 at the rate of 1 per 20-30 min.”

Nobody seems sure if the sign was always there, or whether it was added later on. But one thing’s for certain, Bungie loves adding these little secrets to Destiny 2, and we love discovering them!

NEXT: PUBG Dev Might Be Working On A Sci-Fi Open World Game