Home » News » These Terrifying Fighting Games Are Perfect For Halloween!

These Terrifying Fighting Games Are Perfect For Halloween! 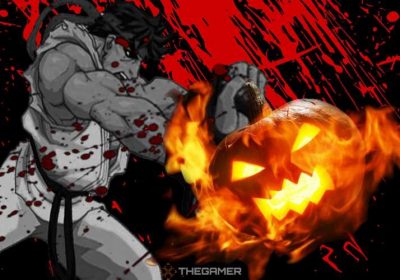 Halloween is fast approaching, so it's time to don a bizarre costume, grab a friend, take out the candy, and hunker down with some creep-tacular video games! And what better way to enjoy the scariest night of the year than schooling your pals in bloody bouts of skill?

Fighting games based on the horror genre may seem rare. However, if you search hard enough, you'll find plenty of options outside the usual gore-ridden suspects, such as Mortal Kombat or Darkstalkers. These indie gems and triple-A favorites guarantee a night of fights with plenty of frights! 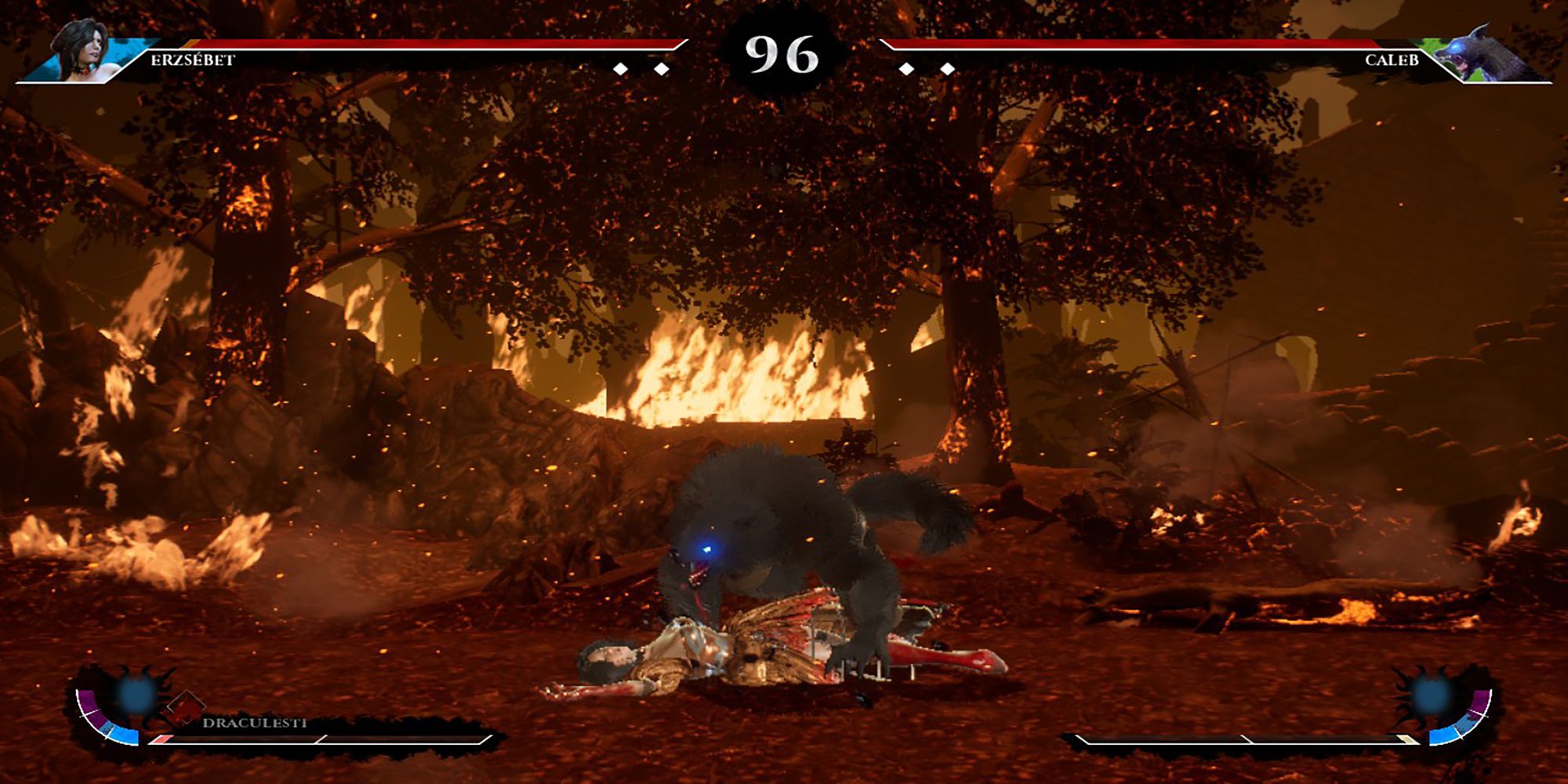 Omen Of Sorrow is a spooky fighting title with plenty of literary horror classics. Characters include werewolves, vampires, angels, re-animated corpses, and other mythical heroes and villains that would feel at home in a Mary Shelley novel.

However, the game's unique Fortune/Fate system sets Omen Of Sorrow apart from other monster mashes on the market. This scale rewards players for offensive play by granting fortunes like enhanced health recovery. Unfortunately, players who cower in fear succumb to a fate of impending doom. This state puts them in danger of losing essential skills, including their super combos. 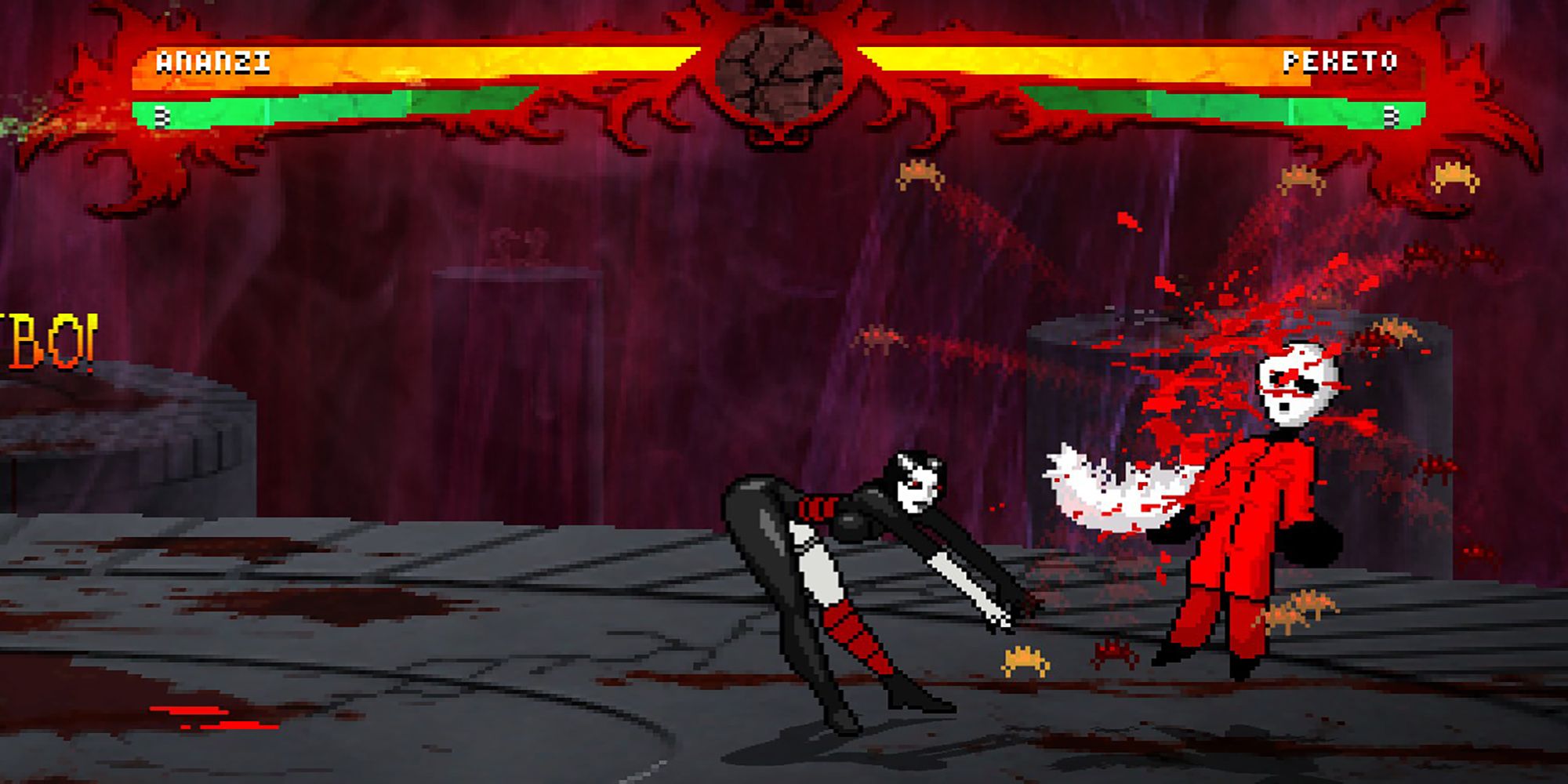 The Black Heart is a fighter oozing with gothic vibes. In this title, six creatures compete for the heart ripped from the ruler of an alternate dimension. These foreboding characters include a spider woman, a Japanese ghost, a sinister scarecrow, and other figures straight from the depths of darkness. Stages include disturbing locales like bloody practice columns and haunted hospitals.

However, under The Black Heart's emo-aesthetic lies a game reminiscent of classic Capcom brawlers, including Marvel Vs. Capcom 2. For instance, several match modes are available, like a team mode ala K.O.F. and partner battles reminiscent of Street Fighter Alpha's dramatic battles. In addition, the game's mechanics include chain attacks, air combos, and move cancels. 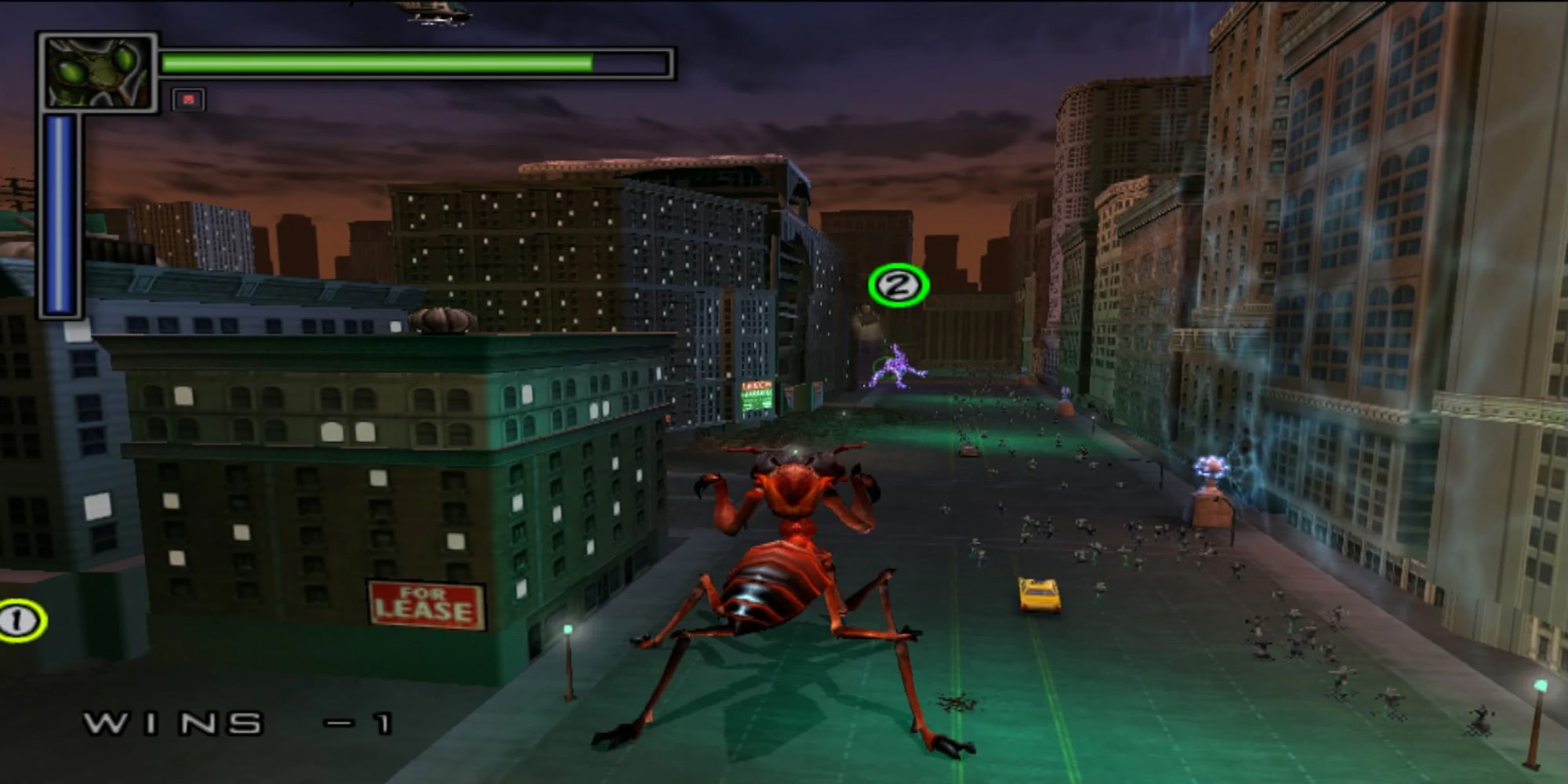 Gothic horror isn't for everyone. So, what if you're looking for a sci-fi affair? In that case, you'll love the PS2 classic War Of The Monsters. This large-scale arena fighter lets you experience epic kaiju brawls in vast cityscapes. You'll find all your favorite monsters here, including the Godzilla-Esque Togera and Cognar, the giant ape.

Nothing is off-limits in War Of The Monsters. You can climb buildings, throw around cars, and cause sheer chaos in pursuit of your enemy! Still, one must keep their guard up. Hazards like enemy tanks can damage your monster before it can reach the opponent. In short, this game is a rampaging fun time! 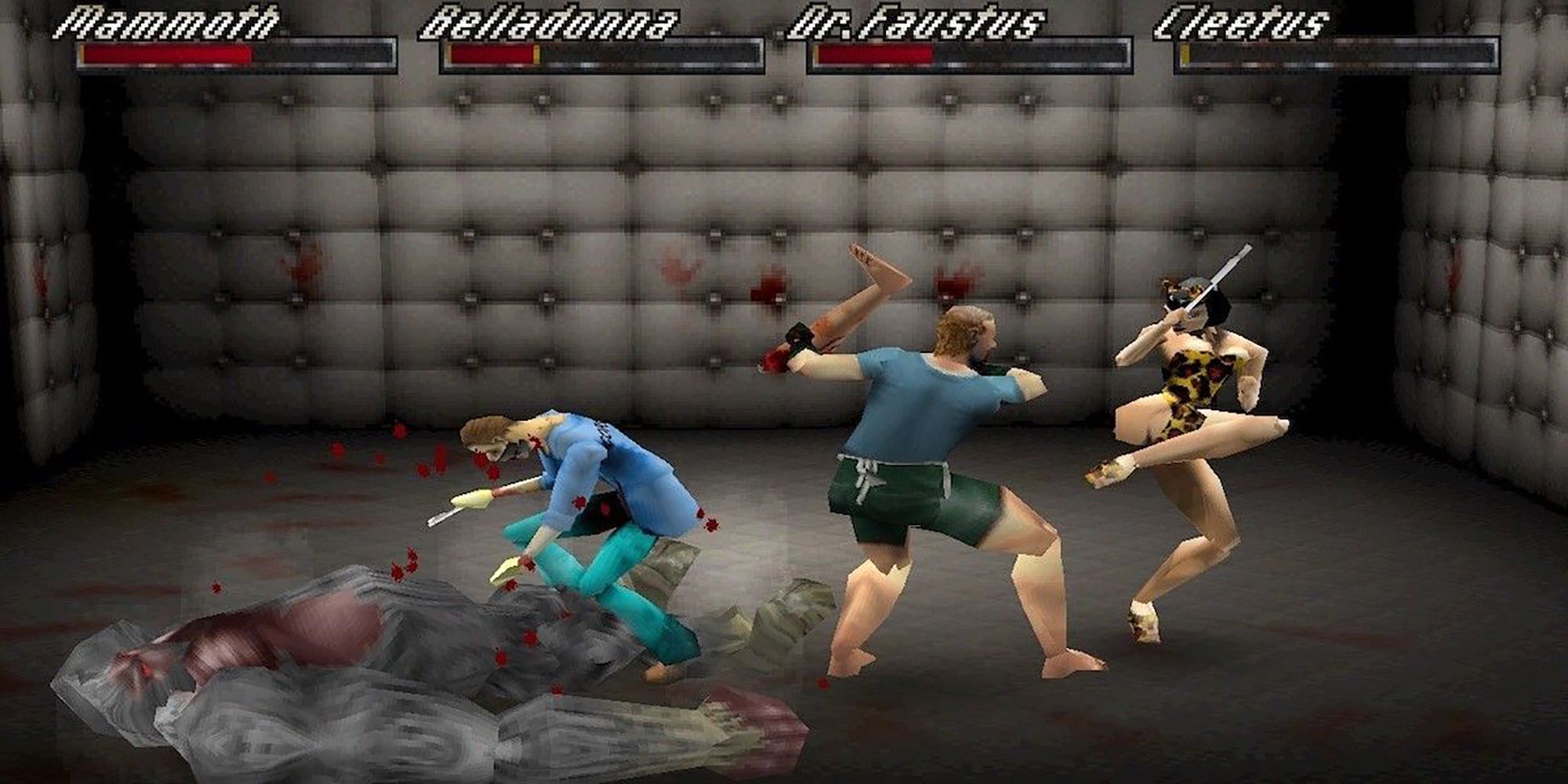 Thrill Kill is a bloody good arena fighter. The game encourages players to fight offensively and fill a kill meter. Once the meter is full, players must assassinate their opponents with gnarly fatalities. The last fiend standing is the winner!

5/9 Terrordrome: Rise Of The Boogeymen 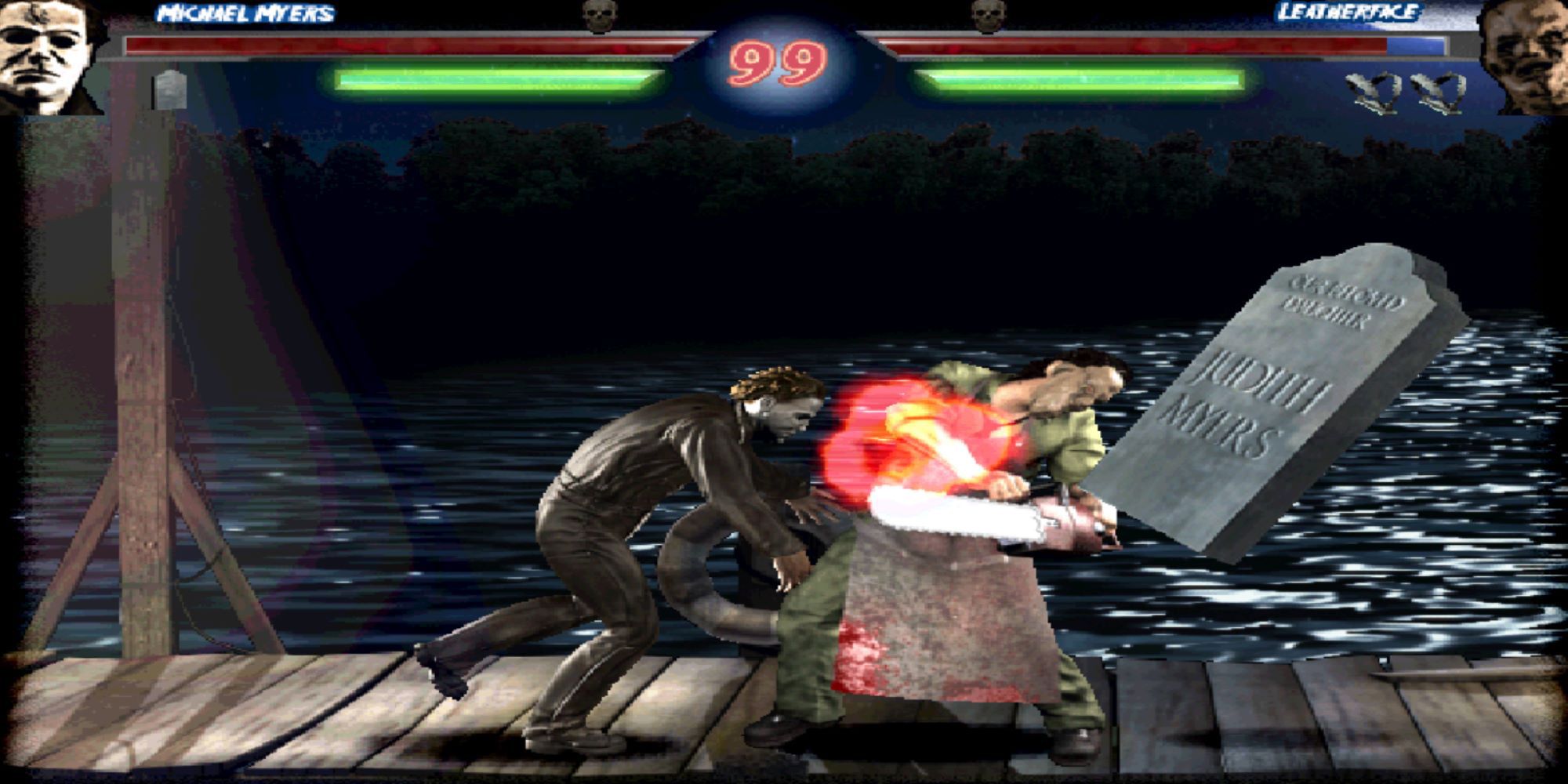 Have you ever wanted to see who would win a fight between Jason Voorhees and Michael Myers? What about Chucky the Doll and Hellraiser's Pinhead? In Terrordrome: Rise Of The Boogeymen, you can create these match-ups and plenty more!

Terrordrome is a free-to-play fan-made fighting game that pits Hollywood's scariest characters against one another. However, this game is much more than its novel cast. On the contrary, Rise Of The Boogeyman has resourceful fighting game mechanics, such as combo strings and helper attacks, making the game a fluid 2D fighter!

4/9 Terrordrome: Reign Of The Legends 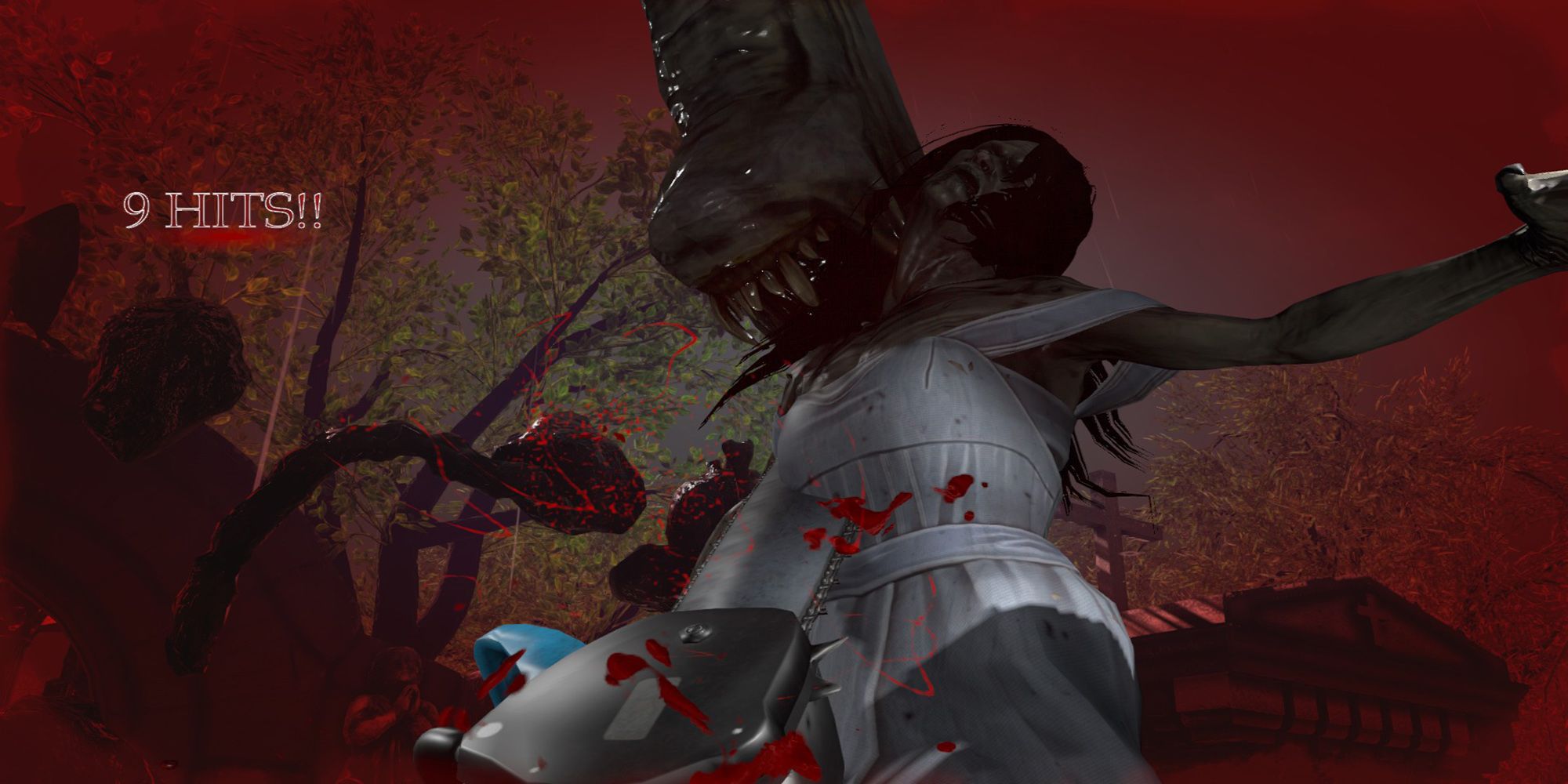 Reign Of The Legends is currently an Early Access title in development. So, there are occasional glitches and balancing issues. Still, the systems that made the original Terrordrome work are present in Reign Of The Legends, including new features like Death Sentence finishers. Plus, players can look forward to new characters in future updates! 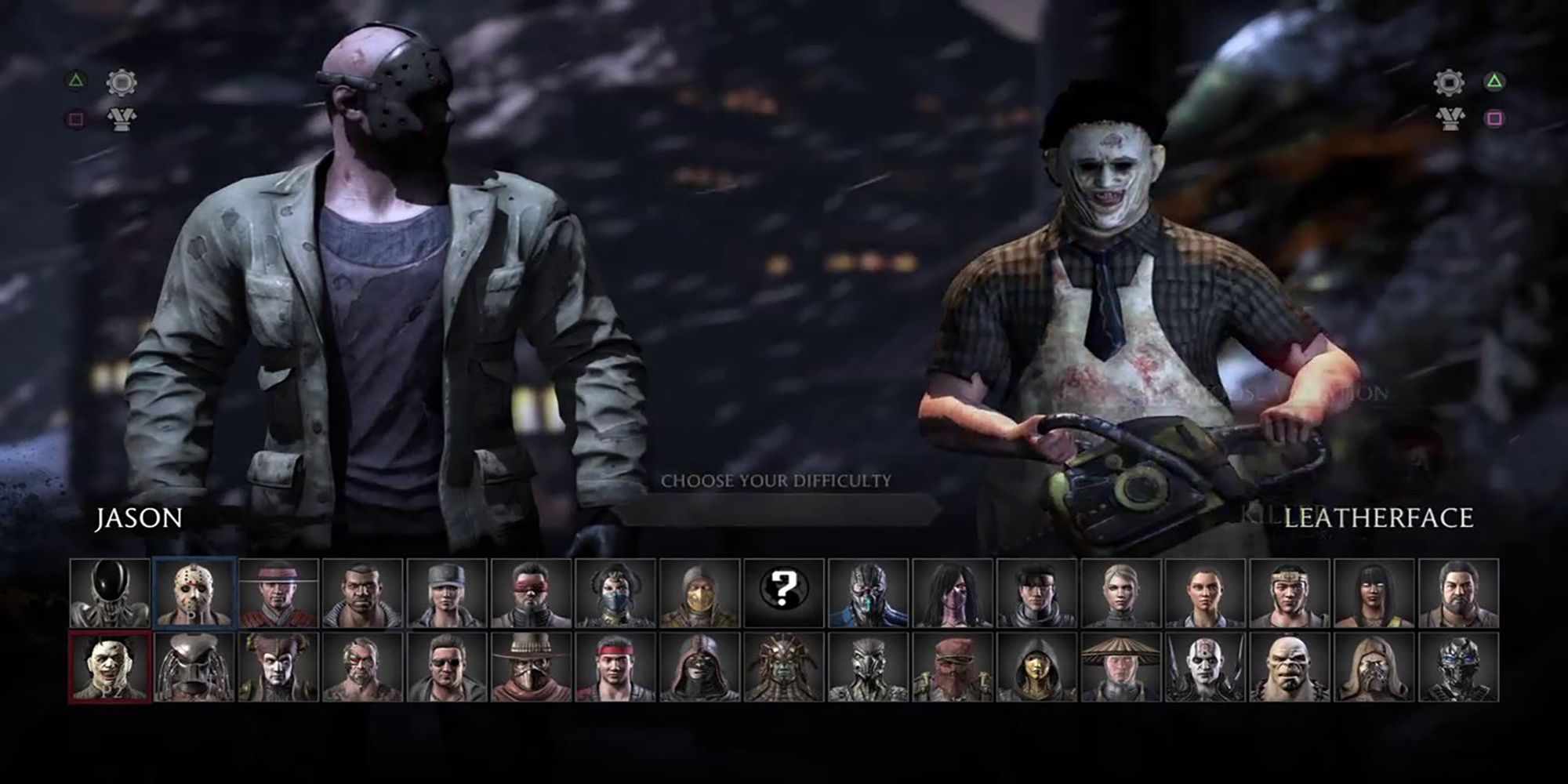 Mortal Kombat X made a massive impact in the series. In terms of storyline, the game jumped generations, introducing new fighters like Cassie Cage and Jackie Briggs. Furthermore, the game included several mechanics that made Mortal Kombat 9 successful, such as X-ray attacks and the energy meter.

But what makes Mortal Kombat X a more suitable fighter for Halloween than its superior sequel, Mortal Kombat 11? The answer is Mortal Kombat XL, the game's definitive edition that includes DLC characters like Jason Voorhees, Leatherface, Alien, and Predator. These guests are much spookier than MK11's, which leaned more into action movie mainstays, like Rambo, Robocop, and the Terminator. 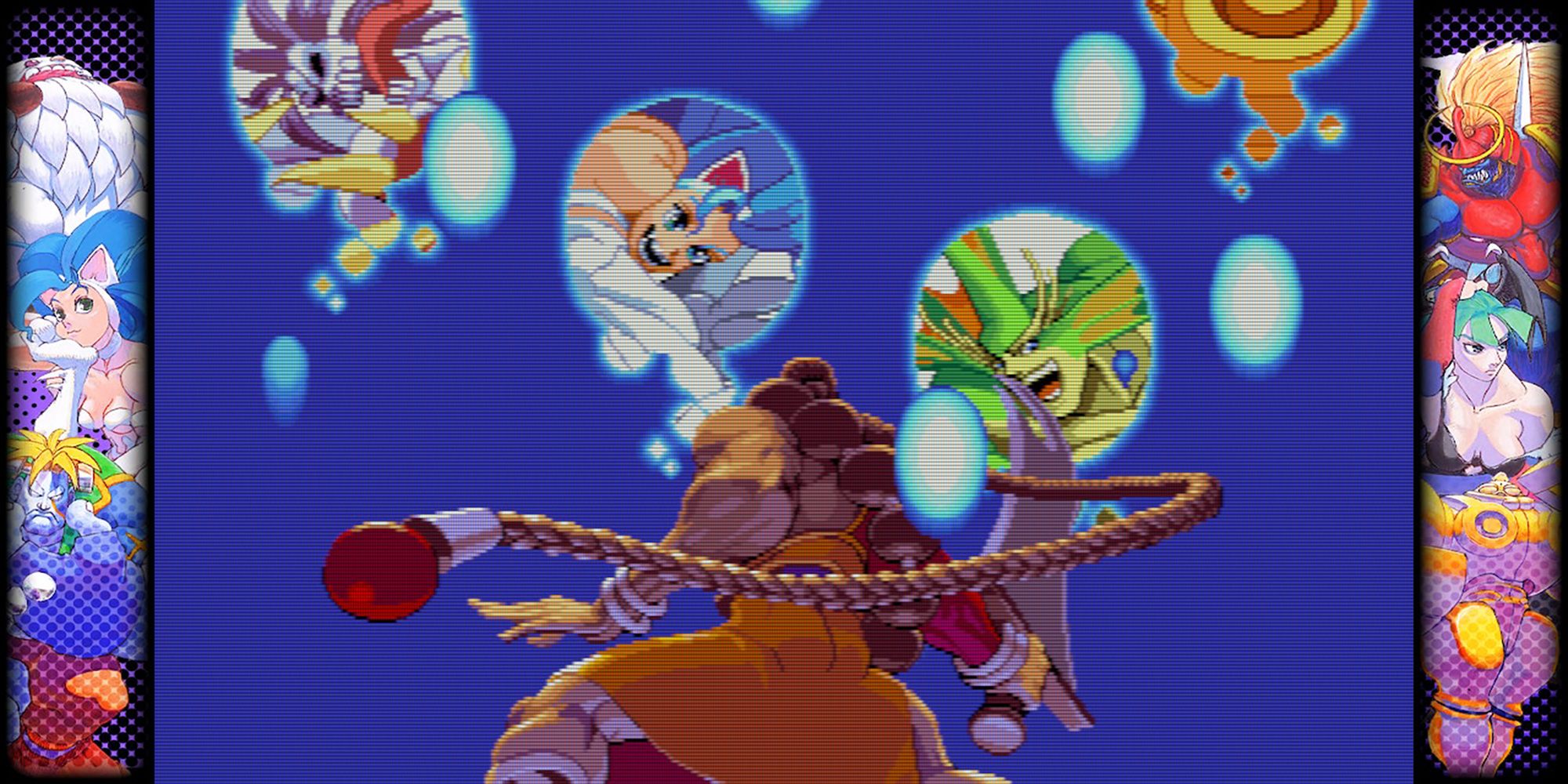 Capcom's Darkstalker games are an obvious choice to play on Halloween. After all, these titles feature casts of monsters based on lore from films, literature, and mythology. However, Capcom's signature fighting game expertise supports the series's dark aesthetic, making it a fantastic series to play year-round.

The first Darkstalkers' title, Darkstalkers: The Night Warriors, has some frustrating systems that hinder gameplay. However, the updated sequel, Night Warriors: Darkstalkers' Revenge, dramatically improves on the original by updating its fighting mechanics and adding fan-favorite characters like Hsien-Ko and Donovan. 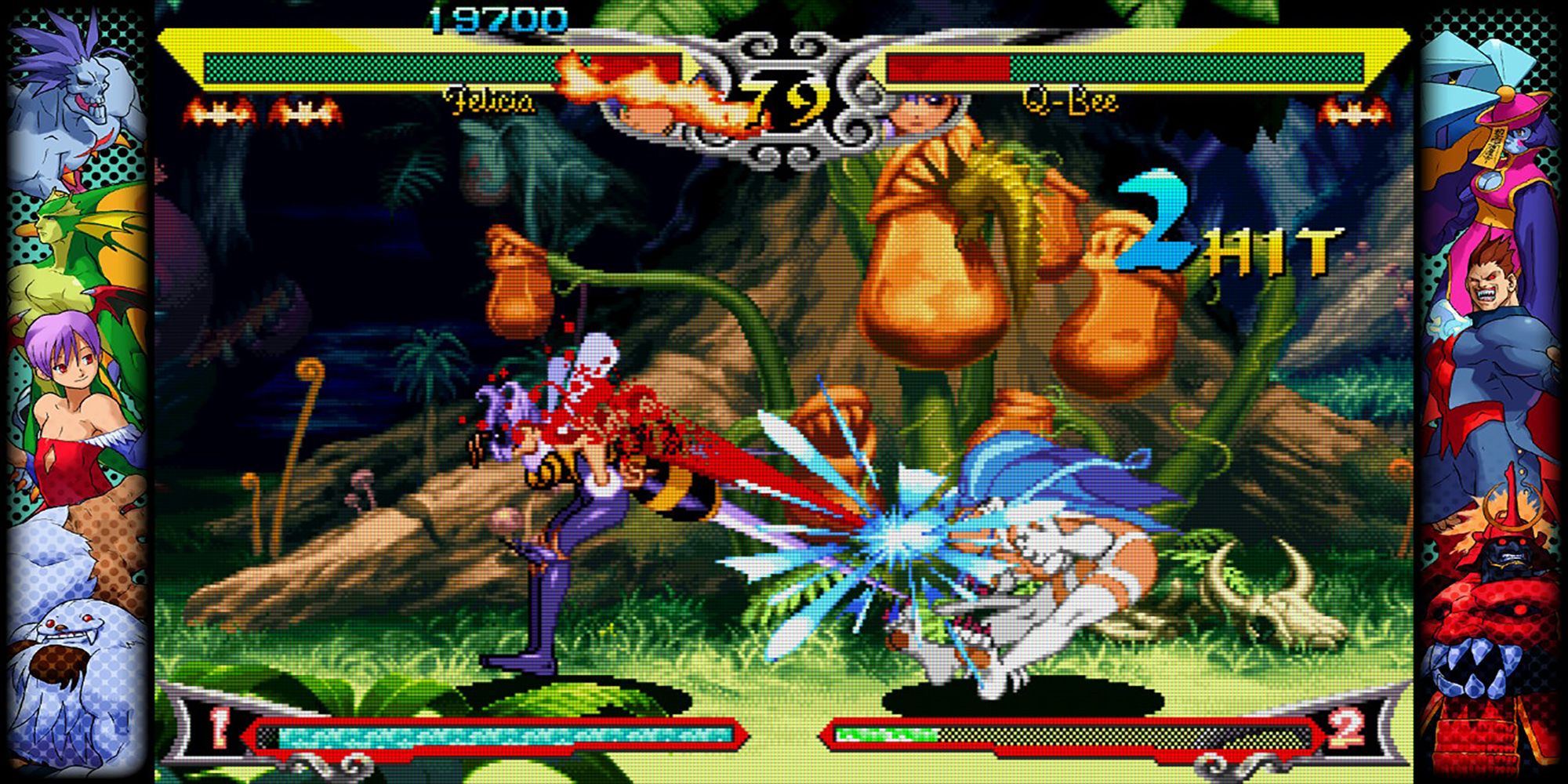 Vampire Savior, known as Darkstalkers 3 in the West, is far and away the best of the series. This game defined Darkstalkers as the fast and ferocious brawler it's known as today. With its swift pace and unlimited super meter, Vampire Savior is a fantastic competitive pastime to enjoy with friends!

Furthermore, out of all the Darkstalker games, Vampire Savior feels the creepiest. For instance, Jedah, the game's boss, is a positively menacing figure that can kill foes with his blood. Furthermore, his stage, the Fetus Of God, is a giant womb that feeds a demonic baby. Nightmare fuel like these fills Vampire Savior's stages, character designs, and storyline, making it a spook-tastic horror fighter.