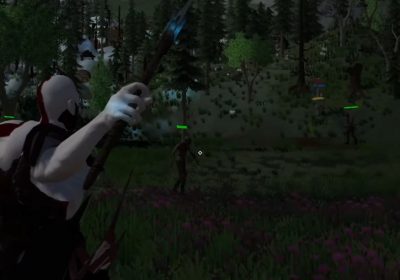 God of War: Ragnarok reviews just dropped and it looks like it’ll be another smash hit for Santa Monica Studios. That’s great news for Santa Monica, since it undoubtedly spent millions making the sequel. The first God of War (which is technically the second) cost four years and $44 million to produce, and that was in 2018 dollars.

Of course, you could have gotten something almost as good in a fraction of the time. YouTuber DanCS challenged himself to recreate God of War in just five days. And what he created is utterly cursed.

Using mostly pre-made assets and a level his girlfriend created in Unity several years ago, DanCS was able to cobble together a very simple game where Kratos stalks around an open field throwing his Leviathan Axe at zombies. Only the axe-throw animation is more than a little stilted and the hitboxes don’t always seem to make any sense. There’s also a weird delay between the axe’s impact and the zombie’s reaction.

But easily the worst part is how Kratos’s costume seems to come to life whenever he winds up to throw his axe. Jagged artifacts turn that tunic into a wearable sea urchin that looks like it’d be more dangerous than the draugr Kratos faces down.

DanCS recorded his own voice for Kratos’s double overhead swing, which was a nice touch, but he might have spent a little too much time on the camera shake and particle effects. There’s not a lot to do other than stalk to the edge of the map where it’ll become painfully obvious where the playable area ends. The skybox could also use some work if I’m honest.

The good news is that DanCS hasn’t released his game to the public–unlike a certain other copycat game maker that tried to release a God of War ripoff on mobile a few months ago. Called "God of Warning," the game lasted maybe two days before it was taken down by copyright strikes.