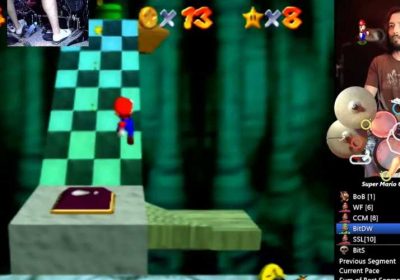 Speedrunning is an endlessly entertaining sport to watch, with players finding ways to break our favourite games that we would never have thought of. And as if beating huge games in mere minutes wasn't impressive enough, a bunch of them have started slapping on additional challenges, like playing one-handed or blindfolded. And today, another runner has continued this trend and found an amazingly bizarre way to blast through Super Mario 64.

Speedrunner CZR just ran the Mario 64 16-star category… while playing the drums. With his truly unique set-up, button inputs were remapped to his drumkit, allowing him to control Mario in a sick 21-minute drum solo. The run was part of CZR's efforts to get the record below 20 minutes, bringing it closer to the 16-star record achieved using an actual controller.

The run is truly a sight to behold. As if he was using an actual Nintendo 64 controller, CZR blasts through Mario 64 with ease. But as an added bonus, we get to listen to him play the drums the whole time.

Even more impressive, this isn't the only "drum%" run CZR has shared. On his channel, he's completed dozens of runs in various games, such as the original Super Mario Bros., Ocarina of Time, and Breath of the Wild.

CZR is going to keep tackling Mario 64 until he gets to the sub-21 minute mark, so it's well worth keeping an eye on his channel. For reference, the overall world record in the 16-star category is 14 minutes, 48 seconds, so having to play the drums is hardly holding him back much at all.

After that, if you're still looking to check out more impressive speedruns, then you're in luck. Summer Games Done Quick wrapped up last weekend, showcasing a whole host of different speed games. The ones that caught our eyes included multiple runs of the Pokemon Emerald Randomizer, as well as the Elden Ring run that closed off the show.