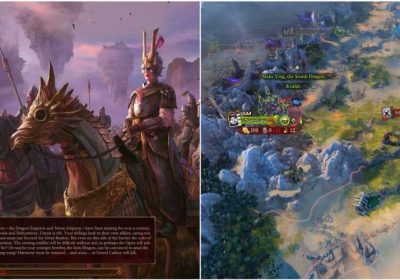 While the standard campaign can take days or even weeks to fully complete, players who desire a faster paced experience can opt for Total War: Warhammer 3's new Multiplayer mini campaigns: Darkness and Disharmony and Something Rotten in Kislev. Focused on providing more condensed action, these scenarios are designed to be completed in a single sitting and serve as a nice change from the typical long format.

This guide will explain how to create a Darkness and Disharmony campaign, what the fundamental changes are, as well as general strategical advice on how to best play the smaller format.

How To Start The Campaign 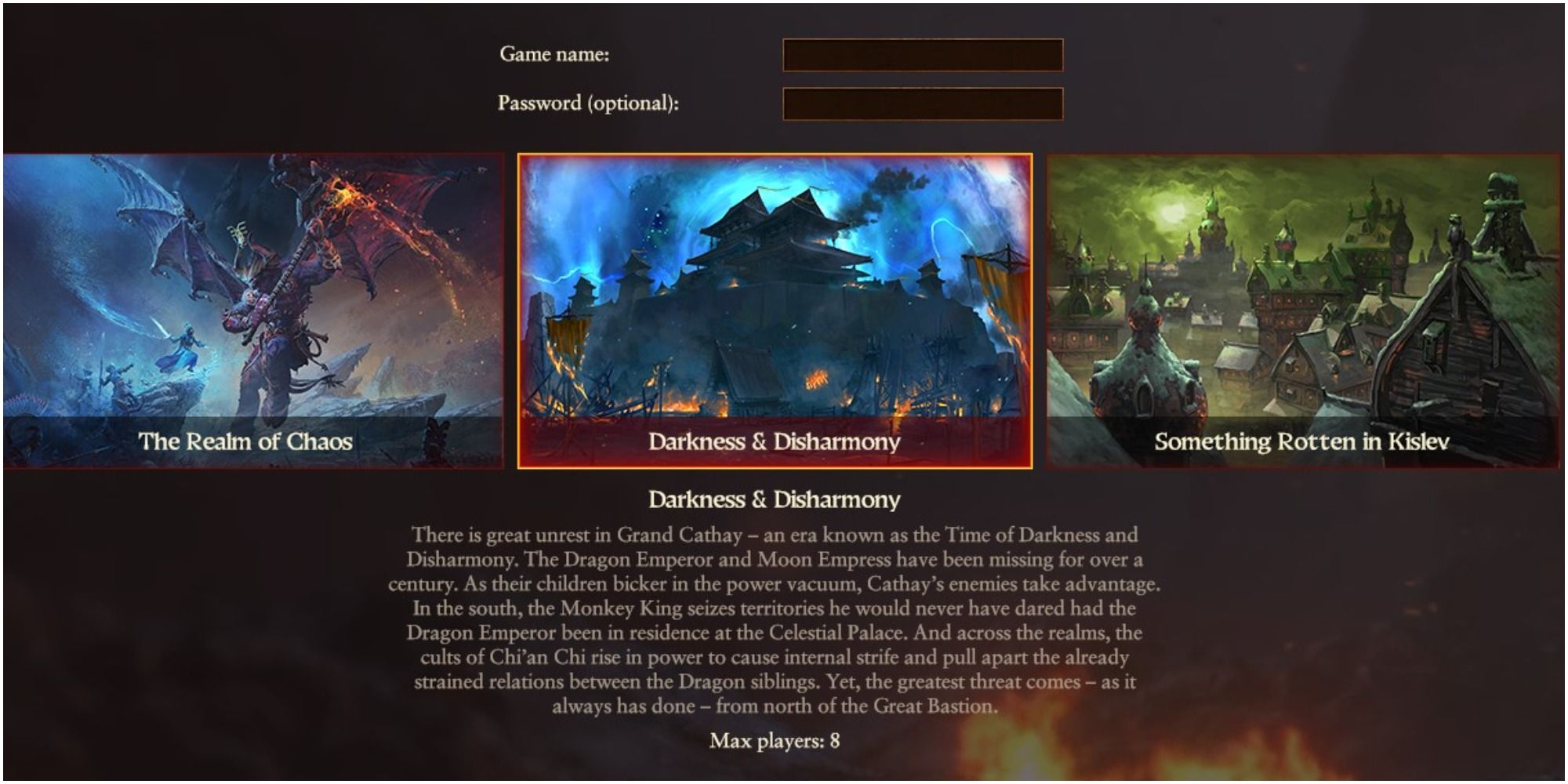 Once you have created the lobby, you are able to select your starting faction, as well as invite your friends. Darkness and Disharmony can support up to a maximum of eight players, and the selectable factions are:

Kislev and the Daemons of Chaos are excluded, as they are championed in the other mini campaign: Something Rotten In Kislev. After all player factions have been selected, simply select Ready, and the campaign will launch. You cannot currently begin a solo Darkness and Disharmony campaign.​​ 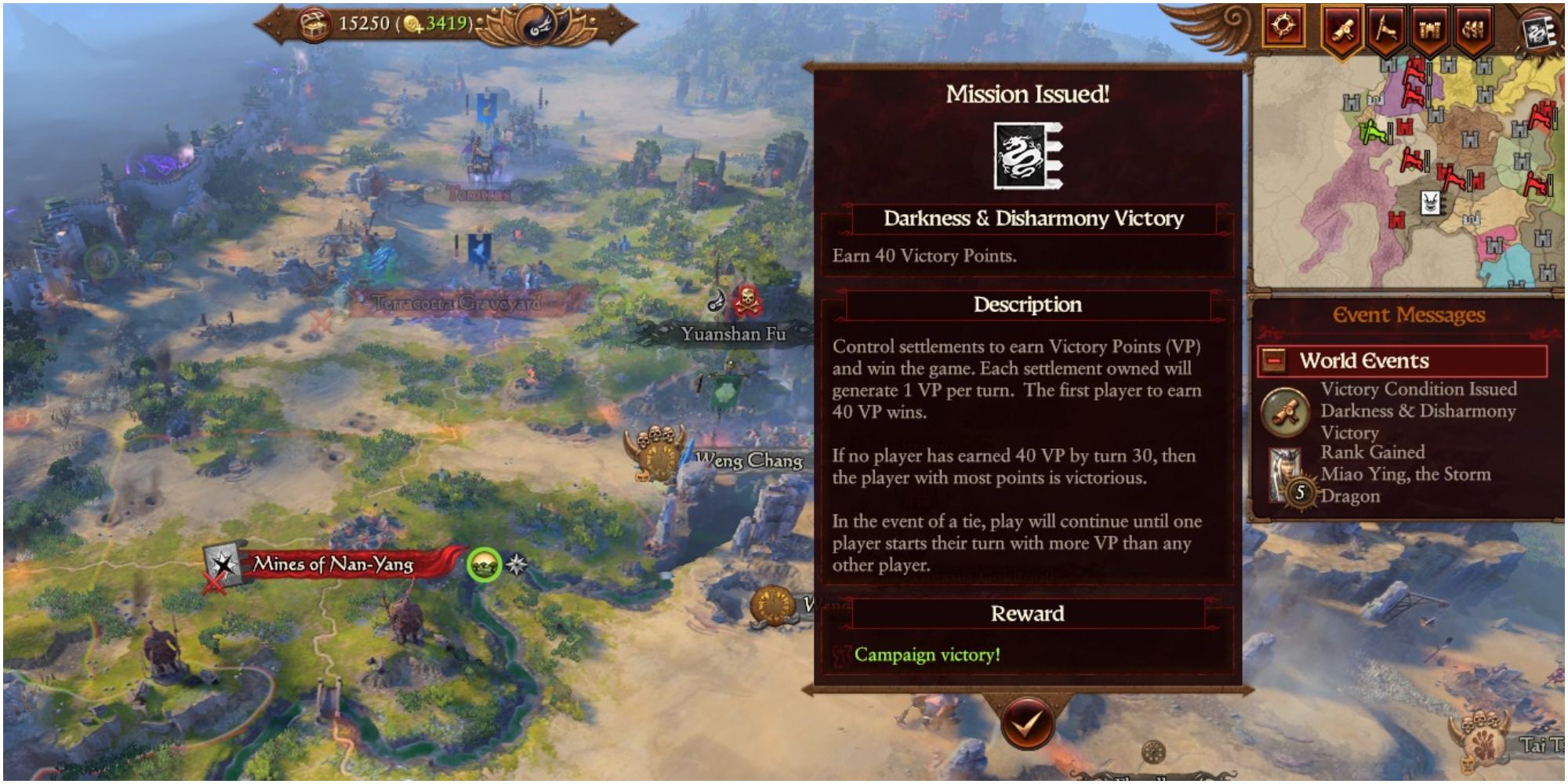 Darkness and Disharmony provides a much smaller map than the main campaign. Centered around the lands of Cathay, Legendary Lord start positions have been altered to fit all factions into the smaller land mass, although Miao Ying and Zhao Ming retain their original starting locations.

When it comes to achieving victory, Darkness and Disharmony provides a new style of objective. Players will earn a Victory Point for controlling a settlement at the end of their turn, and the first player to reach forty Victory Points is declared the winner. If no player has reached forty points by turn thirty, then the game will automatically end, with the current points leader taking the win instead. 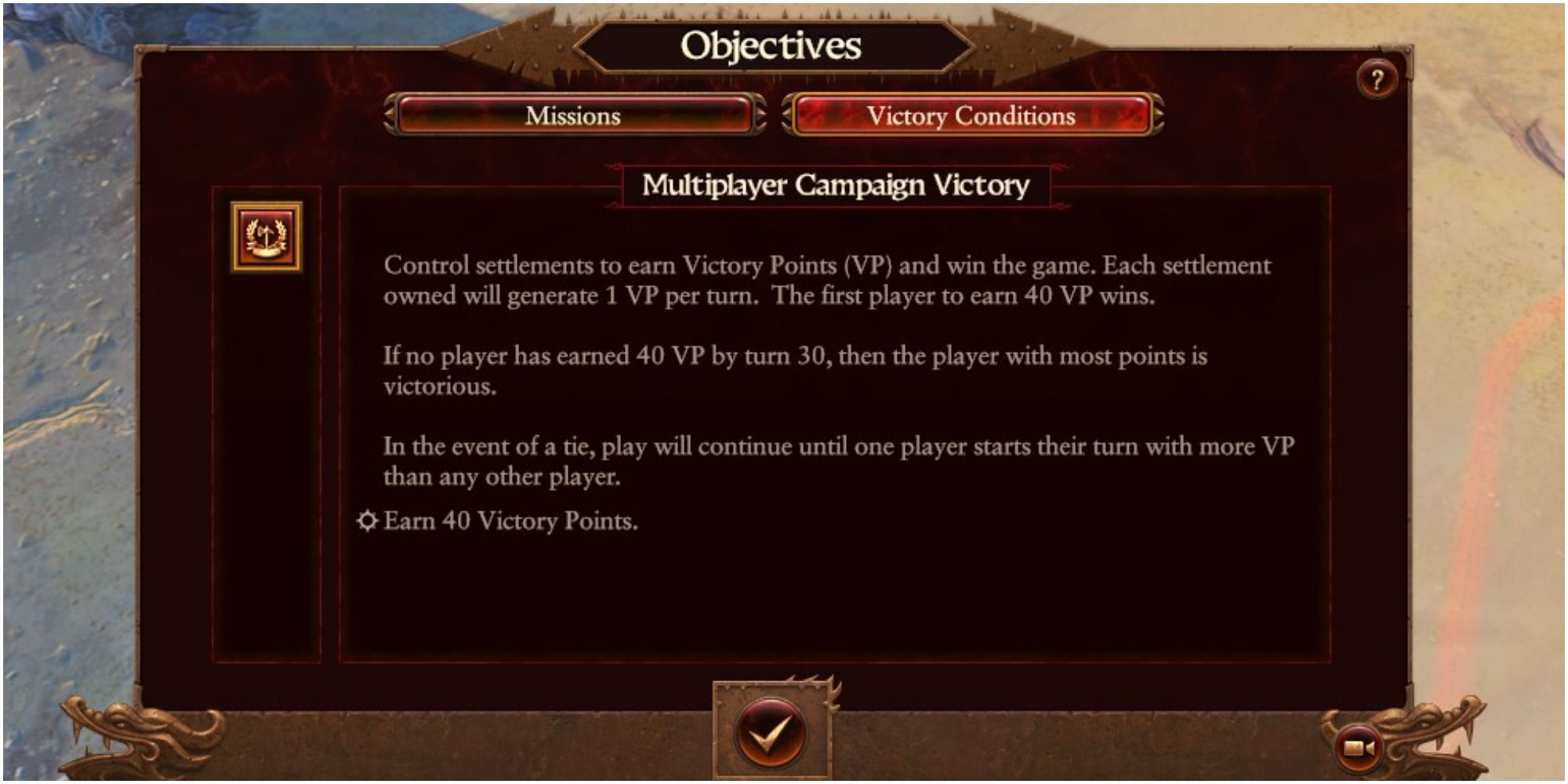 Because of the new Campaign Objective being based on your Victory Points, expanding quickly becomes the go-to strategy. You will not have time to sit back and build up, and although game to game dynamics will vary depending on player count and style, rushing to capture your nearest settlements is always preferred. Being able to secure numerous settlements will allow you to rack up a large supply of points, and can secure you a win even if multiple other players attack you. Every settlement is worth the same, so avoiding more heavily defended areas and taking multiple minor settlements is another great strategy.

Certain factions and lords have distinct advantages, as those with stronger early game units will have an easier time. You will lack the time to build up an effective infrastructure, so armies that can move quickly and not stop to wait for casualty replenishment will also do very well. Your settlements will begin at Tier Four, however some factions will still struggle to recruit important high tier units before the end of the match.

The smaller map size forces players into conflict, and as Darkness and Disharmony is designed as a free for all game mode, the power of A.I diplomacy is greatly weakened. Being aware of your neighbors' positioning is vital, and you should be ready to capitalise on any misfortune suffered by your opponents.