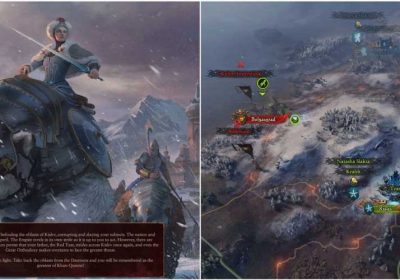 Total War: Warhammer 3 brings two new scenarios designed to provide players with a fresh new campaign experience. While Something Rotten In Kislev and Darkness And Disharmony have different focuses, both can comfortably be completed in a single session, and will greatly differ from the standard narrative campaign.

This guide will focus on the Something Rotten In Kislev campaign, explaining how to launch, the major changes, as well as recommended strategies for each Lord.

How To Begin The Campaign 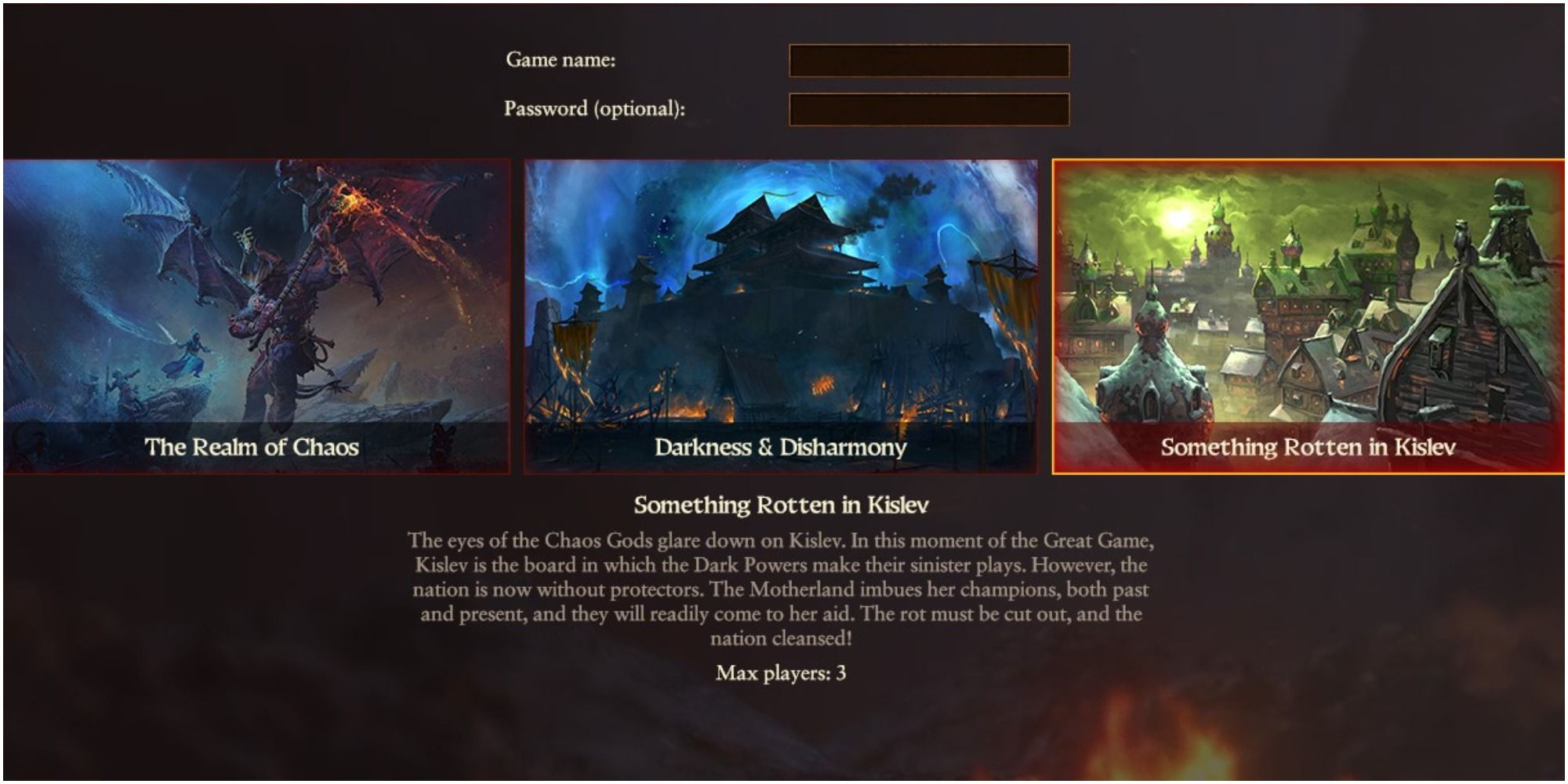 Just like Darkness and Disharmony, this campaign can be accessed via the Multiplayer Campaign option in the Main Menu. From there you will see available multiplayer lobbies, as well as being able to Host your own. After selecting Something Rotten In Kislev, you may also select a game name and optional password.

After the lobby has been generated, you may invite your friends, as well as select your starting Kislev Legendary Lord, of which there are three:

Whereas Darkness and Disharmony functions as a combative free for all experience, Something Rotten In Kislev is much more cooperative, requiring up to three players to work together to defend Kislev, and you cannot currently begin a single-player version of the campaign. After all, players have clicked Ready, the campaign will begin. 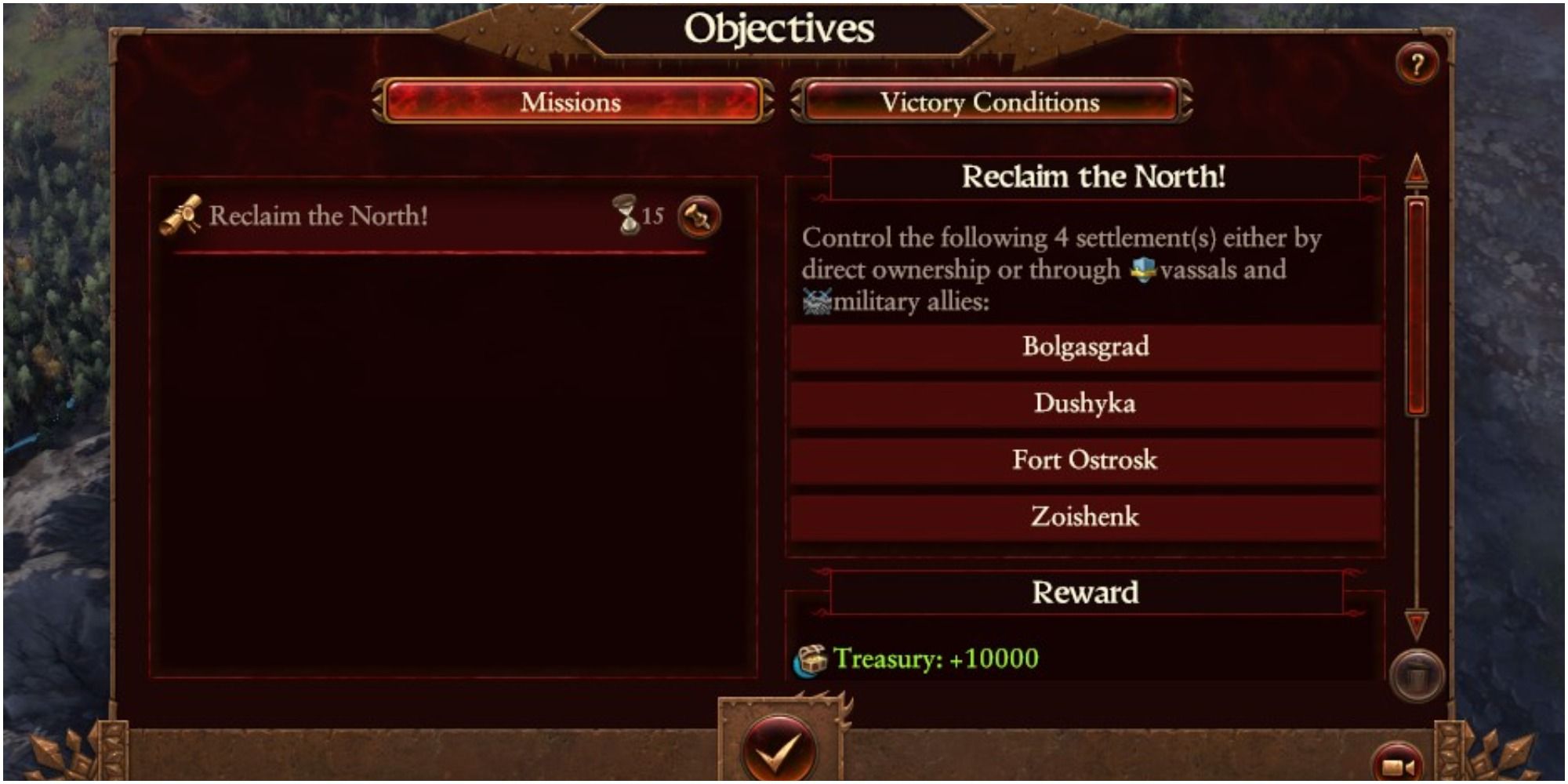 As a smaller than a standard campaign, Something Rotten In Kislev's map size has been reduced to only the lands of Kislev. Your primary goal is to secure your provinces against multiple marauding demon invasions, and you will need to work with your allies to overcome numerous enemies.

As the campaign speed has been turned up, all players' Income and Growth per turn have been increased, as well as Building and Research time reductions. Starting capitals begin at Tier Four, and this can allow you to recruit decent units right from the off. The campaign is not expected to take very long, so saving money for building up your infrastructure is not a priority, try to focus instead on increasing unit recruitment variety.

To achieve victory in the campaign, you must capture specific settlements within a select number of turns, or the campaign will be lost. This can be extremely challenging, especially when attacked from multiple sides, so strong teamwork will be important. 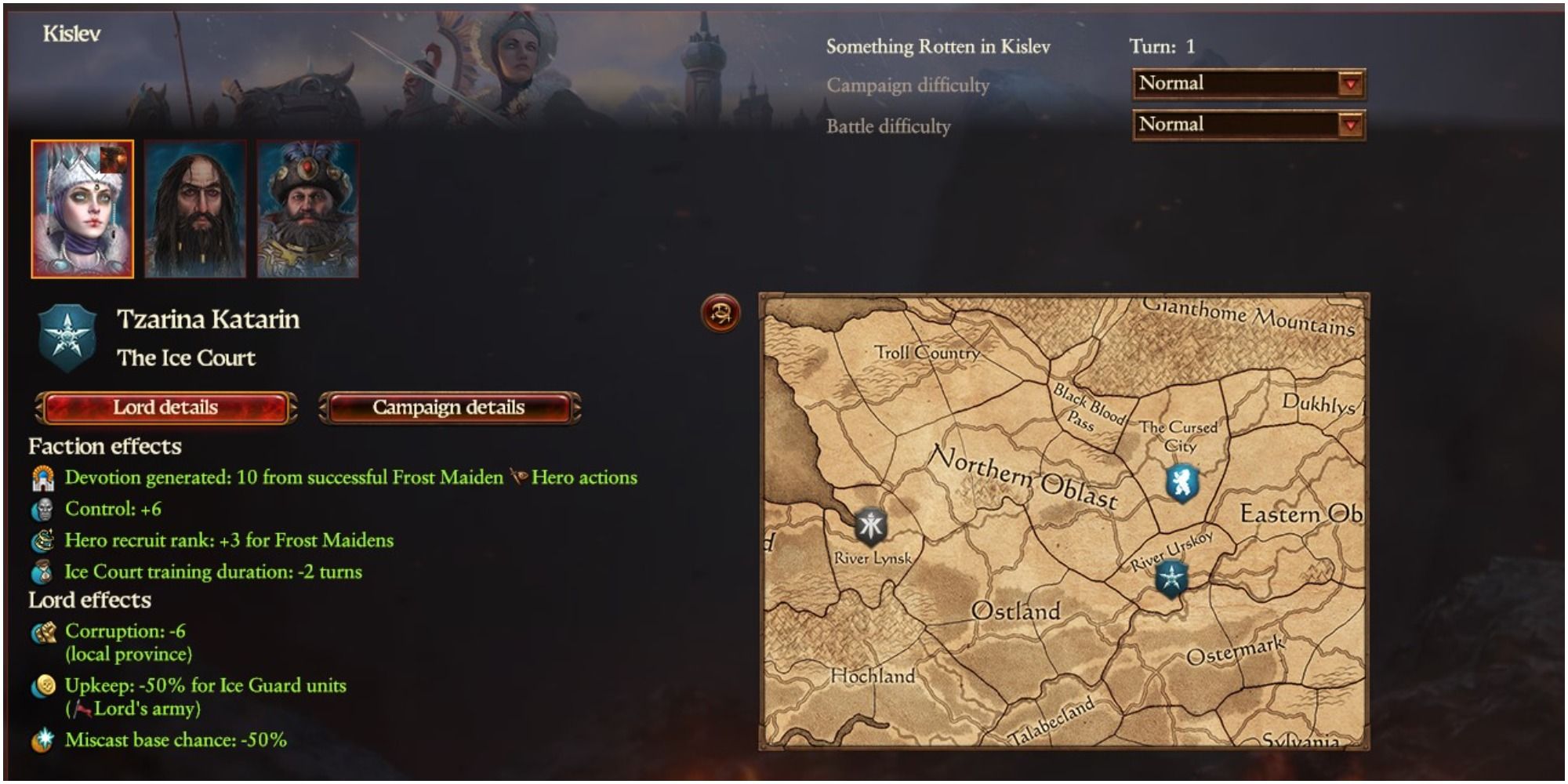 Due to the campaign difficulty, you will want to play to each Lord's strengths, and don't be afraid to tune the difficulty in accordance with your group's experience!

If a player gets into financial trouble, a quick trade can bail them out, as it is vital that all three Kislev factions are strong enough to fight.

The ruler of Kislev, Katarin takes center stage in Something Rotten In Kislev, starting her campaign in the city of Kislev. Her specialty is empowering the Frost Maiden hero type, and when playing as Katarin, you will do well by focusing on a magic heavy build, backed up with Ice Guard units thanks to their reduced upkeep cost. You start relatively close to Boris Ursus, and if you can meet up quickly, an effective deathball can be achieved.

Katarin's central position makes her the ideal candidate for leading the charge and gives you the opportunity to expand in any direction. Her Control bonuses also mean she is the best Lord for which to funnel settlements to, as rebellions are not something you want to be dealing with when hordes of Daemons are at your door.

Undoubtedly the most difficult Lord to play for the Something Rotten In Kislev campaign, Kostaltyn does not have the luxury of starting close to another ally, and must often fend for himself, protecting Kislev on its Western front.

Kostaltyn's Lord Effects can provide Ward Save for Patriarchs, and also gives his entire army Frenzy. This can result in a very strong force, and there will be a noticeable difference between the regular A.I. Kostaltyn performance and that of a decent player.

Kostaltyn is the key to a strong campaign, as he has an important role in providing security for the other two Kislevite factions, and is an enjoyable challenge.

The father of Tzarina Katarin, Boris Ursus is a bear aficionado, providing increased recruit rank and reduced upkeep for War Bear Riders. However, it is the Light War Sleds that Boris players should look to utilise. The best unit the Kislev faction has to offer, this monstrous cavalry will barrel their way through any opposition, and make for an incredibly effective doomstack.

When playing as Boris you should look to support Katarin with her expansion, stacking Light War Sleds to compliment her magic and infantry-based army. Stacking two armies together is a great way of ensuring you don't lose momentum, as if one force takes heavy losses, the other can take the lead.

With the tight time frame of Something Rotten In Kislev, you most likely will not be able to afford to lose your main army, so you should try to play as safely as possible while focusing on the strengths of the Kislev unit roster: Heroes and War Sleds.