Following its reveal in September of last year, Luigi’s Mansion 3 has been an exciting addition to the slate of 2019 Switch releases. However, Nintendo has been eerily quiet on the title ever since the reveal. That changed earlier today with the Nintendo’s E3 Direct presentation, as we learned all about Luigi’s new abilities and the co-op mode ScareScraper. I went hands-on with 15 minutes of the story and played a round of 4-player co-op to see how the new entry in the cult-favorite series is coming along.

The story of Luigi’s Mansion 3 invites Mario, Luigi, Peach, and the Toads to a beautiful and luxurious hotel. The crew is riding in a bus to the hotel when a ghost dog appears next to Luigi to deliver a message. Luigi reads the message and gives the pup a few belly rubs as the bus pulls up to the hotel. Mario and Peach excitedly run into the hotel, leaving the Toads to carry all the luggage. Red Toad, who was driving, falls down the steps. Luigi quietly walks off the bus with his own suitcase before looking up at the shimmering, golden hotel and exclaiming, “Wowee Zowee!”

Unfortunately, the hotel doesn’t stay golden for long, as things take a dark turn shortly after Luigi enters. Mario, Peach, and the Toads go missing, and the elevator buttons mysteriously go missing. Of course, in true Luigi’s Mansion fashion, ghosts are the reason for the mischief. Soon enough, the entire hotel is flooded with the paranormal, and it’s up to Luigi to retrieve the the missing elevator keys to reach higher floors to save his friends. 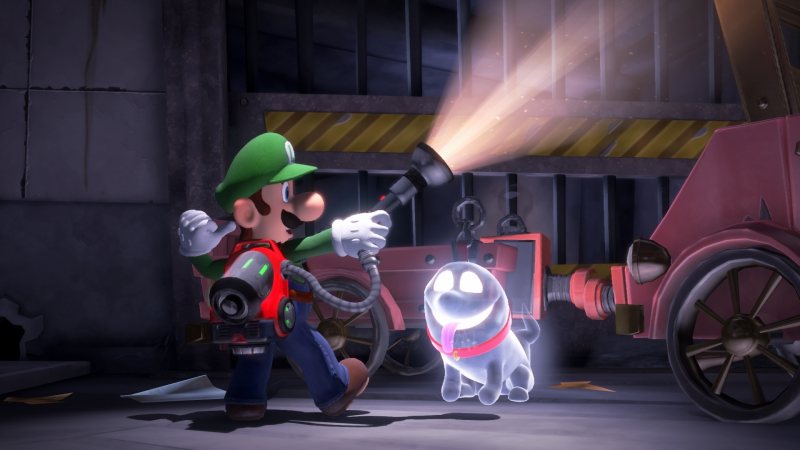 Thankfully, Luigi has a brand new Poltergust model to help him in his quest. Like its predecessors, the G-00’s primary function is to suck up the various spirits Luigi encounters during his adventure. However, the Poltergust G-00 gives Luigi more ways than ever to wear down the ghosts he’s trying to capture. As Luigi pulls back from the ghost he’s sucking up, a meter charges. When it’s fully charged, he can slam any ghosts currently in his stream into the ground and knock down its health. The G-00 can also blast out a plunger, which attaches to surfaces; you can then suck the rope into the the vacuum and rip down barriers and destroy furniture. You can also use the suction shot to rip shields out of ghosts’ hands. The G-00 can also use a burst move that blows ghosts back from Luigi and gives him a little air.

In addition, Luigi can summon Gooigi, his slimy doppelganger that debuted in the 3DS port of Luigi’s Mansion. While Gooigi can be controlled by a second player, you can still take advantage of Gooigi’s unique abilities and attributes by simply clicking the right stick to swap control between it and Luigi. On multiple occasions, I needed to bounce between Luigi and Gooigi to progress; Gooigi can slip through bars and spikes to reach areas Luigi cannot. He can also use all Luigi’s abilities, including the new Poltergust abilities. However, Gooigi cannot get wet, so while it can slip through parts Luigi cannot, anywhere that contains water requires Luigi to get through.

You often need to use these two in tandem. For example, in one puzzle, I needed to hop into an elevator as Luigi, while Gooigi rotated a windmill by expelling air; if you swap between Luigi and Gooigi while performing an action, the non-controlled character continues their action.

In Luigi’s mansion, floors have distinct themes. The floor I played through featured a medieval fantasy theme, with dungeons, giant barrels, and a jousting arena. Every single room is more than meets the eye, as each area holds at least one secret. In one area, I needed to press in a patch of protruding bricks to open up a secret passage to a treasure chest.

At the end of my demo, I enter the arena and encounter a jousting ghost riding around on the field. He charges at me and plows right through poor Luigi. Thankfully, Luigi has his new Poltergust with a deployable plunger, which he can use to rip the shield right out of the jouster’s hands. 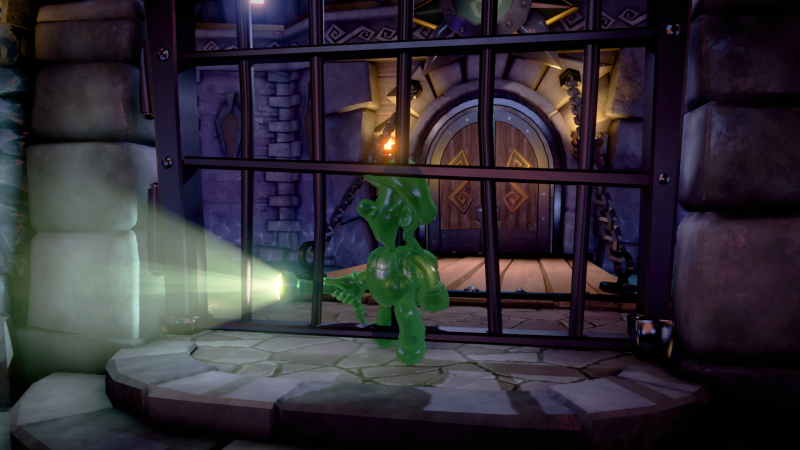 You Don’t Have To Go It Alone

After wrapping up the single-player portion of the demo, I transition to ScareScraper, where I join up with three other local players on their own Switches (the mode can also be played online). Each player controls a different color Luigi. The mission is to complete the objective on the floor before the timer runs out. Some floors task you with rescuing Toads, while others simply ask you to clear a floor of all ghosts. If you succeed in your mission before the timer expires, you can move on to the next floor.

Coordination is key if you want to be efficient in this mode. Thankfully, if you’re not near your teammates, you can communicate messages mapped to the d-pad. With a simple press, I call my teammates to my location when I stumble upon a room full of specters.

Each floor is randomly generated, so each playthrough is different. Each floor requires you to use all your tricks to uncover the ghosts. Every player has the upgraded Poltergust G-00 model, and every character has their own Gooigi. In addition, players must be mindful of traps scattered throughout the floors, including fake doors that smash Luigi into the wall, or trap carpets that wrap up Luigi and require another co-op partner to set them free.

I enjoyed my time with both modes. The puzzles in the story mode were clever, and tearing through a floor of ScareScraper was a blast. I’m excited to see the other themes in the single-player story, and I can’t wait to group up and try to improve my time in the ScareScraper mode.