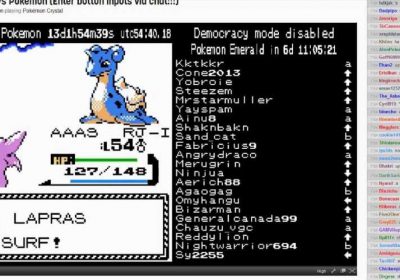 A Twitch streamer called Chris left his chat to play Pokemon Crystal with a randomiser mod for five days but his fans beat it in less than two (thanks, NME). As is the case with any 'Chat Plays' stream, it involved letting his average of 1,000 viewers interact with the game by typing what button they wanted to use, pushing a huge mass of people to collaborate.

That's a tough endeavour when so many will be inclined to troll and sabotage, ruining important catches or last-minute clutches against a gym leader. So Chris planned ahead with a few rewards. There was an "Emote-only mode" which stopped viewers from being able to type commands. This let mods take control which chat used to catch a shiny Espeon. There was also a reward to put trolls in time out, giving the audience some breathing room without interference.

Chat's main Pokemon of choice was Ursaring, the big bear with a golden ring on their stomach. They got them to level 71 by the end of the run. And while they managed to beat everything and everyone – in only 35 hours and 33 minutes no less – including the post-game Red fight, it wasn't without hiccups.

Morty's gym puzzle took the chat hours to get through, proving to be one of the most difficult aspects of the run. Solving puzzles on your lonesome can be a headache, let alone co-ordinating it with thousands of people spamming commands. But chat persevered and managed to pull it off.

It's a good way to bookend the year, bringing together so many to conquer a classic game – it's comfortingly festive, even if its unintentional. But if you want to go out and celebrate New Year's Pokemon-style yourself, then there's always Go's own event, the Season of Heritage. There are costumes, party hats, shiny Hoothoots, and a bunch of festive 'mons including a shiny Fearow if you're lucky.