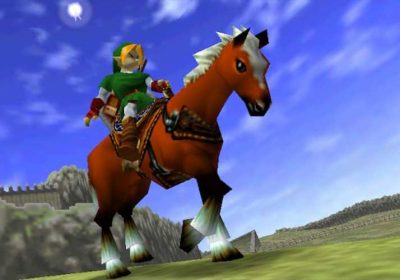 As 2022 nears its end, it's wild people are still discovering unseen footage from games that launched more than two decades ago. The Legend of Zelda: Ocarina of Time takes center stage this time as unseen prototype footage has been discovered on an old VHS tape.

The discovered tape includes seven minutes of clips from various Nintendo 64 titles the studio wanted to hype heading into 1997 (thanks, Nintendo Life). The N64 sizzle reel, which you can check out below, is about as '90s as it gets. Sprinkled in are shots from Ocarina of Time, some of which never made it into the final game.

Don't worry, if you're only interested in seeing the Zelda gameplay, you don't need to watch the whole video just to see what amounts to about 12 seconds of Link. MrTalida has taken the footage provided by tanks404 and stitched it together. Most of it actually pieces together well to create some relatively smooth footage.

While it doesn't drop a bombshell on how players view Ocarina of Time, it's still pretty cool to see how the game was coming along more than a year before it launched. Link can be seen opening a chest, battling Stalfos, and even passing buildings in Castle Town that don't appear to have been included in the final game. No idea why the buildings were cut, but doing so certainly didn't harm its popularity.

The last few months have been great for discoveries like this one. In September, an unearthed Nintendo report from 1996 included images of an unused ghost stage from Super Mario 64. Those images were pieced together to create a gif, giving Mario fans a better feel for what that level might have been like. As for The Legend of Zelda, Link fans will have another game in the series to rank in 2023 when Tears of the Kingdom launches. Will it be better than Ocarina of Time?