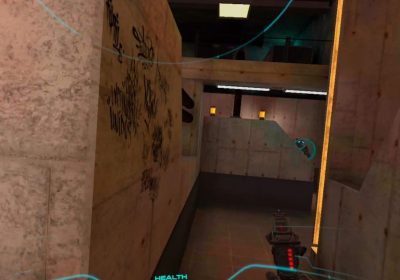 Space Pirate Trainer DX offers Oculus Quest owners VR’s most compelling reason to head out of the home and beyond “room-scale.”

The original 2016 game Space Pirate Trainer from I-Illusions is one of consumer VR’s earliest and most widely played wave shooters, becoming a go-to demo for friends of so-called “room-scale” VR. The newly added “arena” mode in the DX edition on Quest dramatically expands the game’s reach by requiring play areas measuring at least 10 meters (or nearly 33 feet) in each direction. There’s a level editor, a single-player mode and five included levels while “co-located arena mode” sees two players align their play spaces layered atop one another by “facing in the exact same direction and holding the right controller ‘Oculus’ button for two seconds,” according to I-Illusions.

The game doesn’t need laser tag’s physical barriers nor does it make paintball’s mess. A 10 meter play area is enough to offer short corridors perfect for a quick physical sprint while steep drop-offs and rigid-looking walls ward you away from the edges. And if you listen for actual footsteps, they can pinpoint the other player’s location behind a nearby virtual wall.

“Make sure your space is clear of obstacles,” I-Illusions advises in its review guide. “If you leave the guardian for any reason, or take off your headset, be sure that the playspace is aligned correctly – as you did during initial setup. This is super important for co-location play. Respect personal distance between players — There’s a warning to alert you when you’re too close.”

Other key suggestions include tying your shoelaces and “don’t lean on any virtual walls,” the I-Illusions review guide explains, “we’ve all been there.” Indeed, that last tip underscores the level to which you are both blindfolded to the physical world while your senses are tasked with trusting a simulation in a way you never have before. Players of Eleven Table Tennis reported a similar phenomena being so engrossed you fall over trying to lean on a non-physical ping pong table.

Most people wearing a VR headset from 2016 to now have learned to move at a certain cadence in VR. Moving in VR at a steady but careful speed provides time to remember what to do if you see a gridded wall appear. But here, you’re ducking behind a virtual wall and moving quickly to slink around a nearby corner for a better angle on your opponent. These fast-paced movements call for a level of confidence from the player that’s never been common before in tethered room-scale VR. And after so many years playing VR in a range of small rooms, suddenly sprinting confidently in VR feels like an absolute breath of fresh air.

The release of the arena mode accompanies the addition of a more traditional “versus” mode that can be played in more common small-scale play spaces. In tandem with the release of these new features, I-Illusions is joining Waltz of the Wizard Natural Magic and Pistol Whip in raising the price of their game to drive the development of a title with a much larger scope than was possible initially. The DX edition of Space Pirate Trainer on Oculus Quest and Quest 2 is $24.99 for all the new features while existing Quest owners get them as a free upgrade.

Some arena-scale location-based VR companies like Zero Latency offer backpack-based computers to power their VR headsets. Wearing an uncomfortable backpack, though, can be cumbersome and players can have a bad experience if they are rushed through their fitting. SPT:DX, meanwhile, is delivered straight to VR headset owners at home and could conceivably open up a “Bring Your Own VR” headset model to some form of out-of-of home VR entertainment.

Will we see a future where people can rent a VR headset like a pair of bowling shoes to play against someone who brought their own gear to a large-scale open arena? Space Pirate Trainer DX may be a step in that direction and we’re excited to see if a community rallies around this new kind of large-scale VR sport.