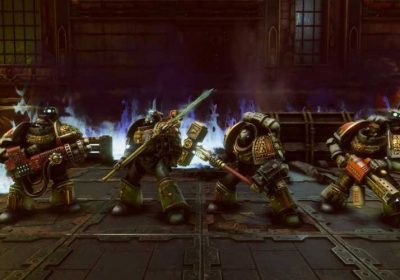 A great beast stands in front of me, its skin tinged putrid green and bursting with pustules. The only semblance of humanity across its twisted body is a disproportionately tiny head teetering upon its great, wobbling mass. That head stretches into a grin like a gash as the creature rends open a wound in its stomach, out of which pours its minions. The Great Unclean One is the personification of plague and disease, and my small squad of super soldiers seems woefully unequipped to stop it.

It turns out that, with the correct application of my abilities, psychic powers, and big ass energy swords, I could overcome The Great Unclean One and its horde of Nurglings. But this was just the final level of the three I previewed, all of which gave me an insight into exactly what kind of experience Complex Games has created. And no, it’s not just XCOM with Space Marines.

For starters, they’re called Grey Knights, and they’re to Space Marines what the Kasrkin are to the Imperial Guard. If you still have no idea what that means, they’re psychic sci-fi SAS. But also, while Chaos Gate follows a lot of genre conventions that turn-based tactics games like XCOM created and refined, it also gives things its own, aggressive spin, a lot of which comes from the Grey Knights themselves. 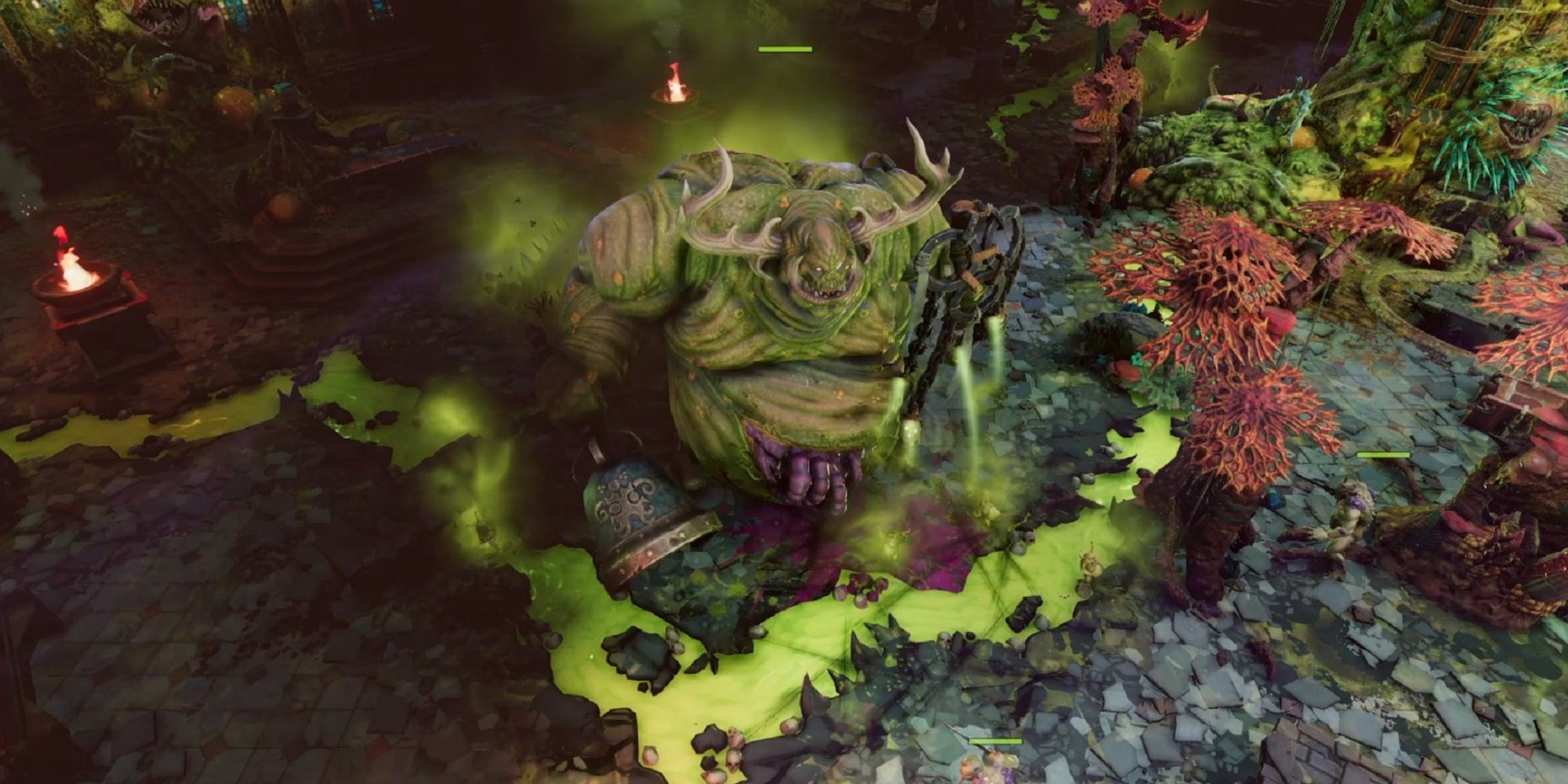 As Complex Games’ creative director Noah Decter-Jackson explained to us in our interview with him, mechanics came first in the developer’s design philosophy, and they found ways to needle the lore around how they wanted the game to play. But the Grey Knights embody the front-foot, up-close-and-personal fighting that Chaos Gate encourages. You can still hide behind cover, equip ranged loadouts, and set your squaddies to Overwatch – the Flamer was especially crucial in wiping out hordes of pesky Nurglings – but the majority of abilities and weapons available in the preview gave you a strong push towards delivering the Emperor’s justice by taking the fight to them, rather than hunkering down and simply surviving.

Whether that’s the Teleport Strike that allows you to lunge at multiple opponents with your sword before zapping away in a flash of light, Complex’s take on Grey Knights staple Hammerhand to boost your damage, or the fact that most warriors carry a massive, glowing sword, everything is pointing you forwards. That goes for the missions, too. Of the three missions included in the preview demo, only one was a straight-up assassination – The Great Unclean One suffered that fate. In both of the other missions I was forced to extract a Bloom Seed from an enemy (for research purposes, of course) or secure and cleanse a specific area, forcing me to send my troops into the heart of the levels and push forwards rather than play cautiously. And I’m so glad it did. 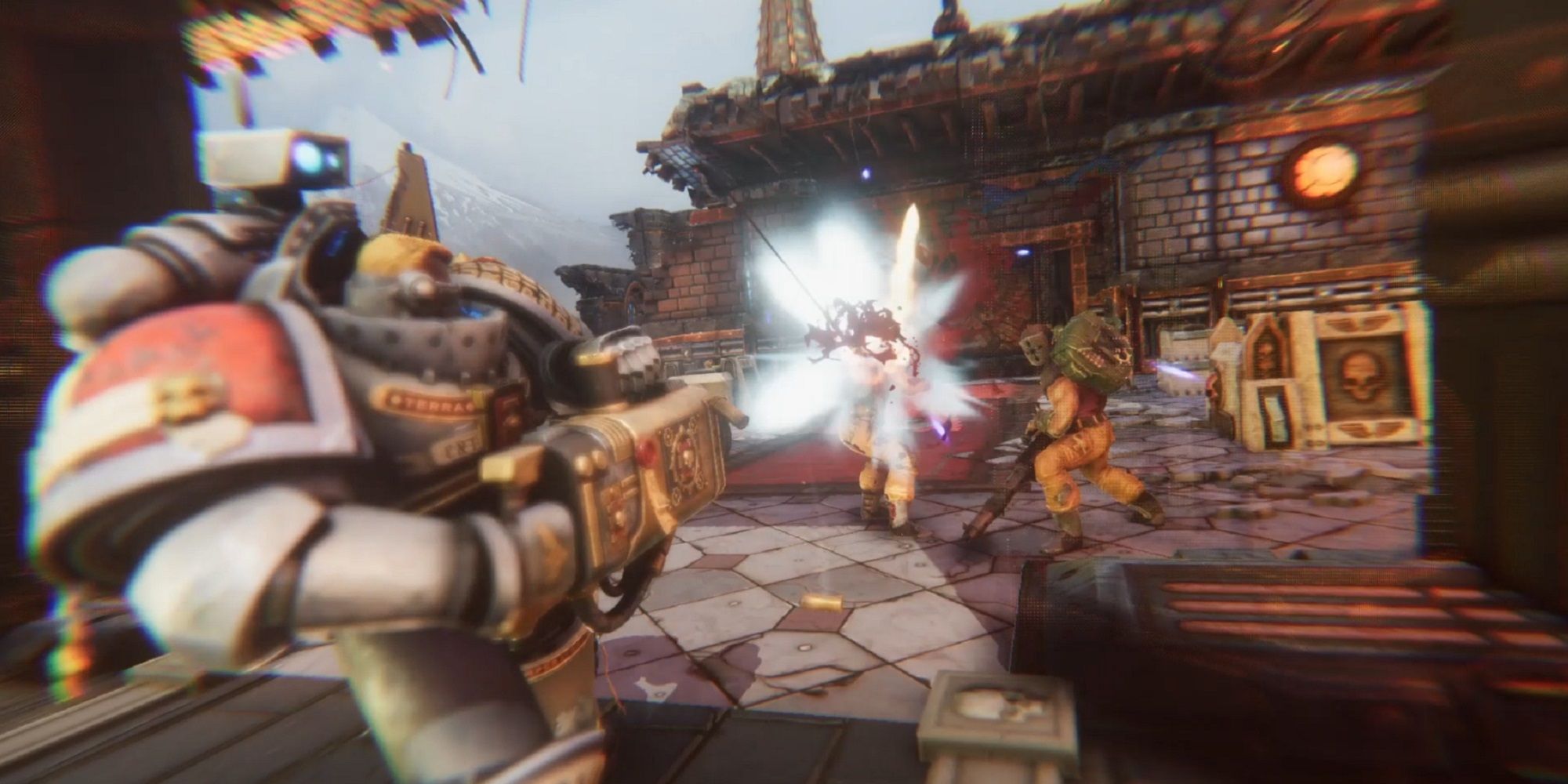 The streets of the dilapidated cities that make up Chaos Gate’s levels are well designed, offering multiple pathways, flanking routes, and tactical options at all times. Even better than their designs, however, was the destructible nature of every level. In the tutorial I was shown how to zap warp lightning at a pillar in a cathedral filled with daemons, crushing multiple beneath its stony architecture. But this was just the beginning. Blowing up pipes, shooting explosive barrels, and throwing grenades at buildings all comes with varying levels of destruction. Some things will be completely flattened, others will leave a shell behind and offer minimal cover, and more will create an impassable area that you have to navigate around thanks to your own hubris.

Destroying your environments is such fun that I would never use the same entrance to a building twice. One Knight takes the front door (kicking it in instead of knocking and opening it nicely, of course), another takes the window. One squaddie is flanking to breach the opposite door, and another provides covering fire. No breaching for you. All it needs is the option to rappel in from the rafters and I’d have everything I could ever want. Every breach – or other environmental explosion – is accompanied by a short cutscene. It’s short enough that it doesn’t feel repetitive, yet exciting enough to get your blood pumping for the fight ahead. 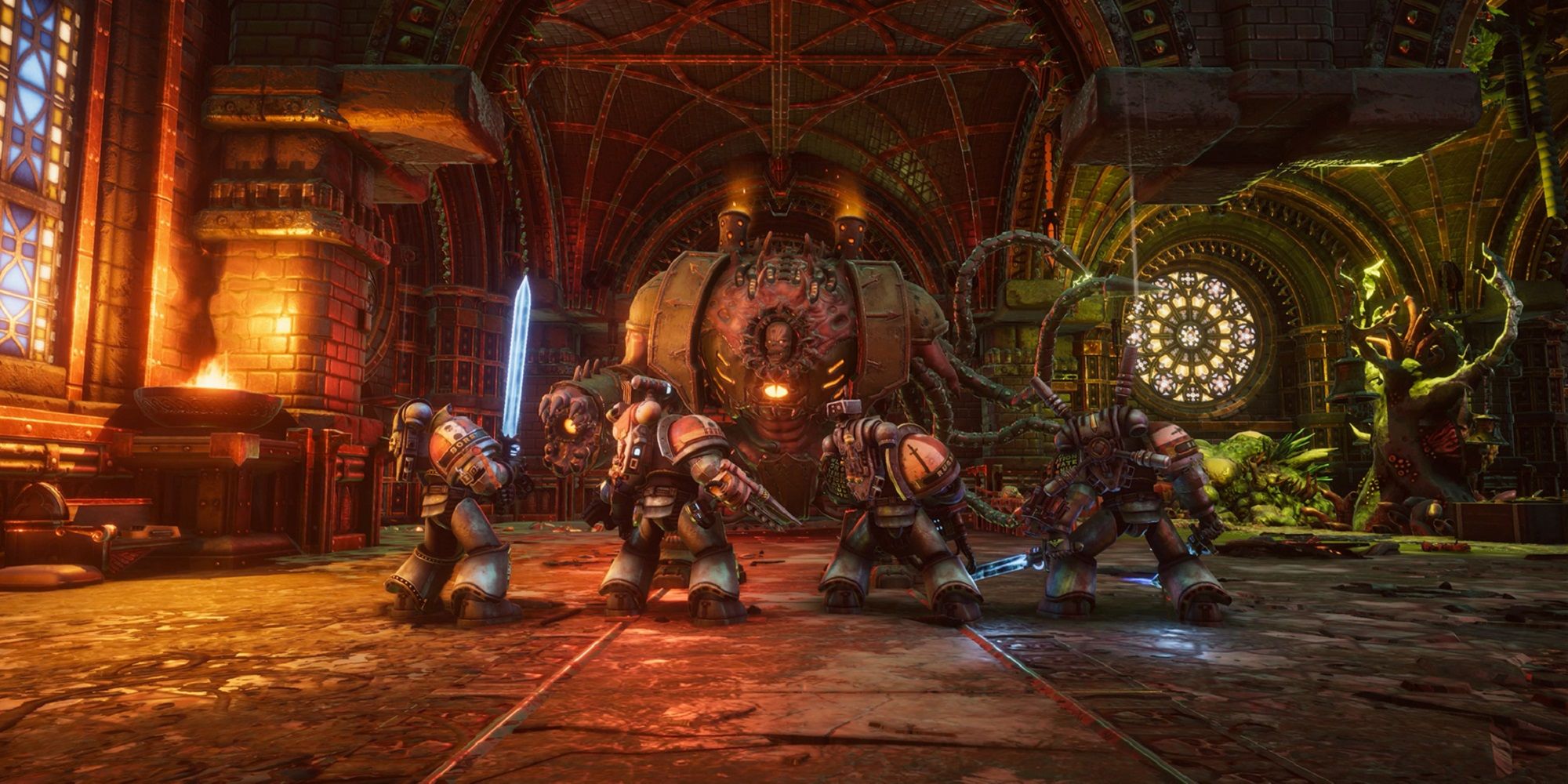 The enemies themselves are varied and exciting. I’m a sucker for Nurgle’s pustuled plaguebearers, but with rosters of traitor militia, fallen marines, dark sorcerers, and of course daemons, there’s plenty of variety and things never feel boring, even when fighting wave after wave of foul scum launching themselves at you out of portals from the heart of the warp. That’s not to mention the war machines either, which look imposing, make very literal marks on their environments, and take some serious skill to fell.

If all this sounds too bombastic for your turn-based tactical brain, then don’t worry. There’s plenty of classic genre conventions, from Overwatch to Action Points, and Complex Games avoids the classic tabletop-to-video game pitfall of adding dice rolls to the formula. I didn’t get to play around with my team’s makeup or loadouts as a part of the demo, but it’s all there, and I can’t wait to get into the nitty gritty of selecting the perfect squad armed with the best weapons for the task at hand. There are different classes of Grey Knight, different loadouts for them to carry, and different psychic powers you can use to buff yourself or attack your enemies. 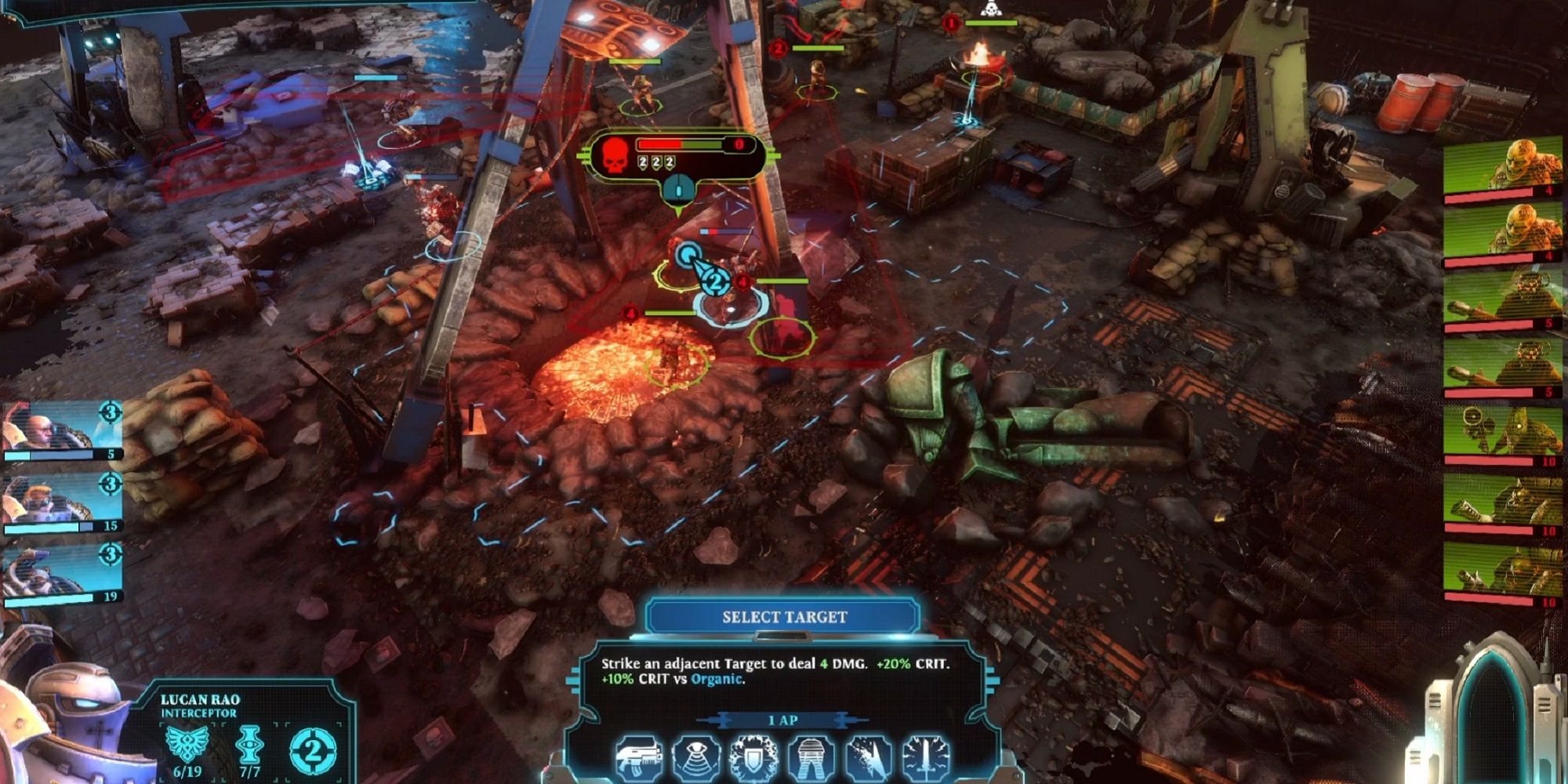 Warhammer: Chaos Gate – Daemonhunters is equal parts tactical and bombastic, a simple idea with layers of complexity. Really, you can engage with it as deeply as you want. Do you want to tinker with loadouts, execute complicated strategies, and accept difficult stratagems to reap bigger rewards, or do you want to run headfirst through the doors with a premade warrior and decapitate a daemon? More than anything else, Chaos Gate posits the question: why not both?