We ran Quake II RTX on a GeForce RTX 2080 Ti card, and here's how fast it was

On June 6th you’ll finally be able to get Nvidia’s remastered Quake II RTX version for free. And if you’re wondering just how fast the game runs, we just found out in the oldest-school way possible.

First, to catch you up, Nvidia has taken iD’s classic 1997-vintage shooter Quake II and lovingly updated it with a fully path-traced renderer. While you might dismiss that as “just another game with hybrid ray tracing” support, this is much more than that. At this juncture of ray tracing hardware performance, most games use ray tracing sparingly and combine it with traditional raster techniques.

Nvidia’s Quake II RTX remaster, however, renders everything by physically tracing light rays to create the scene. Such an undertaking with a modern game’s complexity isn’t possible, but 1997’s Quake II puts it within reach.

Nvidia gave us a chance to play with a near-release version of Quake II RTX during Computex, so we decided to see how close in fidelity the RTX version was.

When we talk about Quake II, we’re talking old-school PC gaming, and old-school graphics. In 1997, Matrox was still in the game, AMD hadn’t yet bought ATI, and even Nvidia’s GeForce didn’t exist yet (its card at the time was the Riva 128). In fact, dozens of graphics companies were still competing at the time.

As if to prove how the world is on a time loop, everyone was quaking in their boots in fear of Intel’s upcoming discrete graphics card, the i740 using the AGP interface. The conventional wisdom among investors, technology analysts, and press was that Intel could do no wrong and would soon take over the discrete graphics market.

In 1997, though, PC gamers all wanted 3Dfx’s Voodoo card (the Voodoo2 card would come out a year after Quake II).

Here’s how you run a benchmark in Quake II RTX that way we did it in 1997.

How to benchmark Quake II RTX the 1997 way

Only old timers likely remember that Quake II had a built-in benchmark, which quickly became the gaming benchmark to measure graphics cards (the term GPU hadn’t been coined yet). What’s cool is Nvidia’s remastering of Quake II includes the original timedemo from 1997.

To run it, install the game demo when Nvidia makes it available on its website. The free version includes three levels but should be capable of running the Quake II built-in benchmark. Configure the game for the resolution and graphics quality settings you want to test, then follow this key sequence:

Those commands work in the Quake RTX version (which was built off of work by Christoph Schied for his Q2VKPT project).

If you just want to see how your copy of Quake II runs today, you may have to type this instead:

Quake II will now run the short scene. Pressing the tilde key again will show an average frame rate from the run. 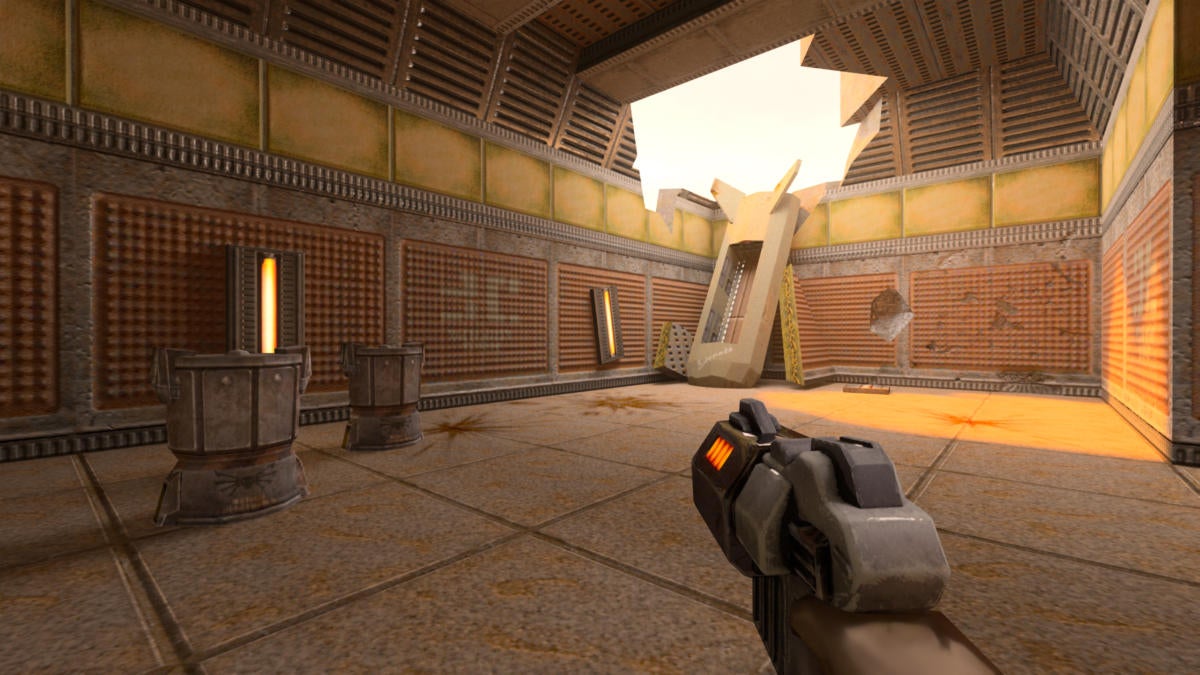 So how fast is it?

On a GeForce RTX 2080 Ti with a not-quite-final version of Quake II RTX, we saw roughly 97 fps at a resolution of 1920×1080, with visual quality set to high. For comparison, we saw about 419 fps in Quake II, set to 1920×1080 with 8x anisotropic filtering and multisampling turned off, using the OpenGL 3.2 renderer on a Core i7-9750H laptop with a GeForce GTX 1660 Ti GPU.  We had to patch the Steam version first using the Yamagi patch.

If you’re underwhelmed by 97 fps on a $1,200 GeForce RTX 2080 Ti card, remember what’s going on here. The game is implementing a fully path-traced renderer and is computationally expensive to run. It’s a technique that’s really only been used in 3D movies to date, and fairly recently, too.

It also yields some beautiful effects. Glass windows and water in Quake II RTX obviously seem like night and day from the original version. So if you’re going to snark about “only 97 fps” on a GeForce RTX 2080 Ti, know that a game session of Quake II RTX will easily render more ray-traced frames than a full-length animated movie, and in real time, too.

So rather than use this as an opportunity to create yet another hot take on the state of ray tracing in today’s games and hardware, instead wind the clock back 22 years and crank up this gem of a game.