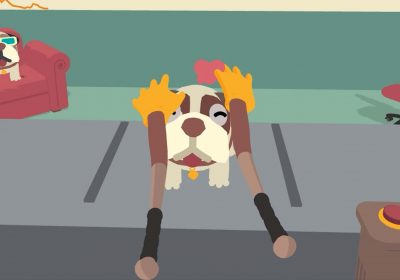 The new game from Denmark-based Triband was revealed at the Upload VR Showcase today. What The Golf was a comical, physics-driven flatscreen game in which you did anything except play a normal round of golf. What The Bat is pretty much the same concept; you have a bat in either hand but, instead of playing baseball, you try complete a range of outlandish tasks.

Check it out in the first trailer below.

What The Bat Reveal Trailer

Over 100 different increasingly crazy tasks are set to be featured in the full game. Minigames in the trailer include trying to make breakfast, playing pinball, getting food out of a vending machine and, of course, petting a dog.

As you play, you’ll be able to unlocked new arcade games and compete for high scores with friends. Overall Triband says the game will offer over four hours of content.

“After years of failing to understand the rules of golf we are pursuing a new passion: failing to understand baseball,” Peter Bruun, Game Director at Triband, said in a prepared statement. “This game is all curveballs and we expect to hit it out of the park later this year. Sorry for the baseball lingo. My bat.”

In some senses, it reminds us of Nintendo’s Warioware series, though VR fans could also draw comparisons to the physics-driven fun of Tentacular.

What The Bat will be releasing on Quest 2 and PC VR via Steam later this year. Stay tuned to the Upload VR Showcase for plenty more updates and reveals from the world of VR gaming.