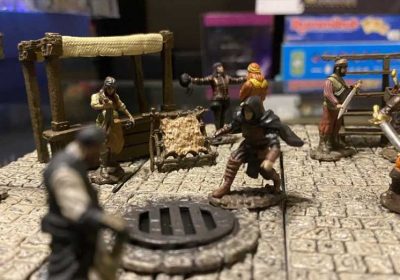 Dungeons & Dragons is more theatrical than ever thanks to the rise of actual play shows like Critical Role. With that comes a desire from many players to add a cinematic touch to their own games. Whether that’s a stacked playlist with themes for every possible situation or dungeons created from convincing fake stone, DMs can really immerse players if they’re willing to put in the time and money. WizKids is one of the best providers for such props, and now they’re getting really detailed with it.

Inspired by the detailed miniature environments seen on the likes of Critical Role, WizKids’ WarLock lets you snap together pieces to create stone hallways or crowded village taverns. The selling point is ease of use and reuse, and the hope is to give players the epic feel of Critical Role without the huge costs that come with custom miniature battlefields. To that end, several sets of floors and walls have been released. There have also been sets with different styles of doors, summoning circles, and common dungeon items like treasure chests. The newest take it a step further with kitchens, blacksmiths, and a torture chamber.

All of these sets cost $49.99 and can be found at your local game store or online through WizKids. While the price might seem high, you get a lot of pre-painted pieces with detailed sculpts. Some give you a lot of mini figures suited for NPCs or baddies, whereas others give you more set dressing. Take the Kitchen, for instance. The set has only one barmaid figure, but provides a stove, several shelves, wash basins, tiny props like food and ale, and even an outhouse. 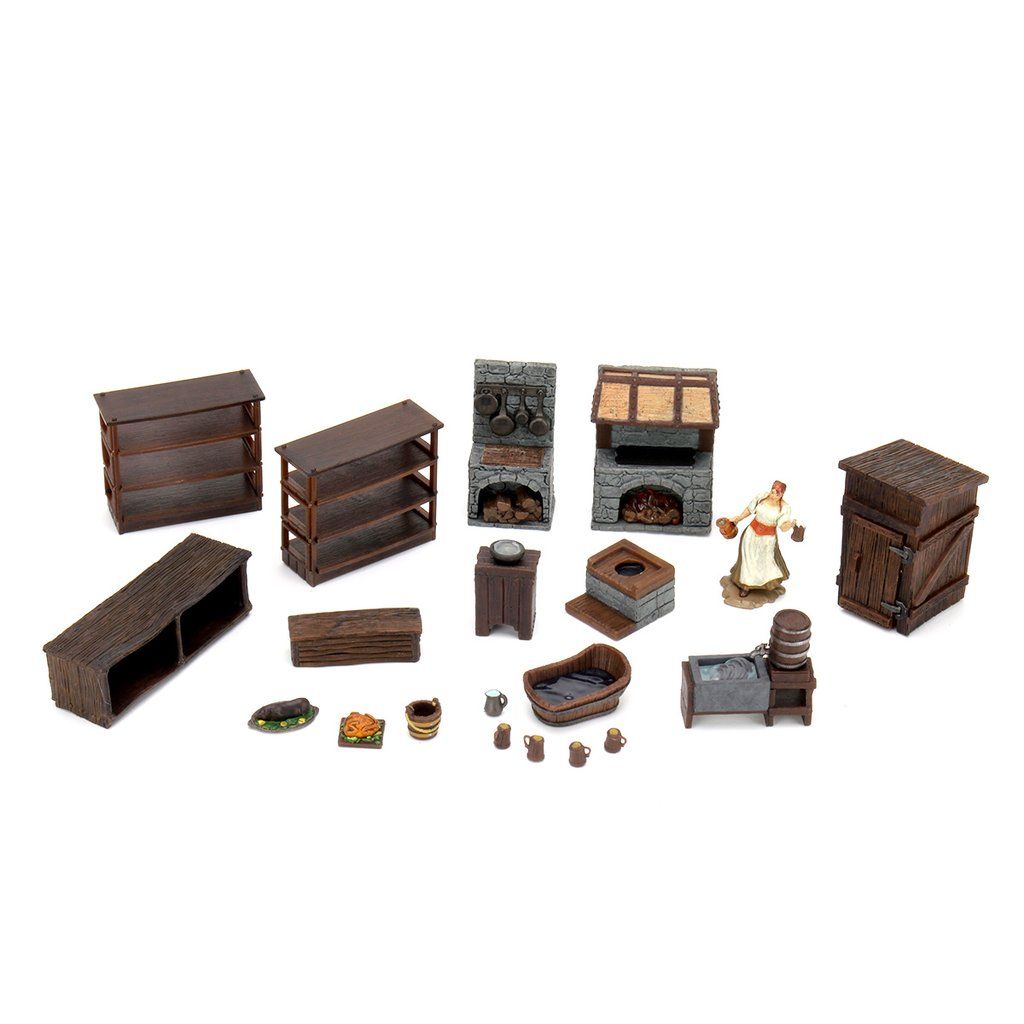 In a similar vein, the Tavern provides one barkeep, plenty of neutral furniture, and a bear rug. As a DM, I love all the details in these pieces – cabinet doors open and there’s even teeny liquor bottles. As a player, I wonder how useful they’ll actually be. Do we really want to spend so much time in the tavern that we need a populated diorama? And if we do, will we be too busy role-playing antics to appreciate the fact that the cabinet doors open? 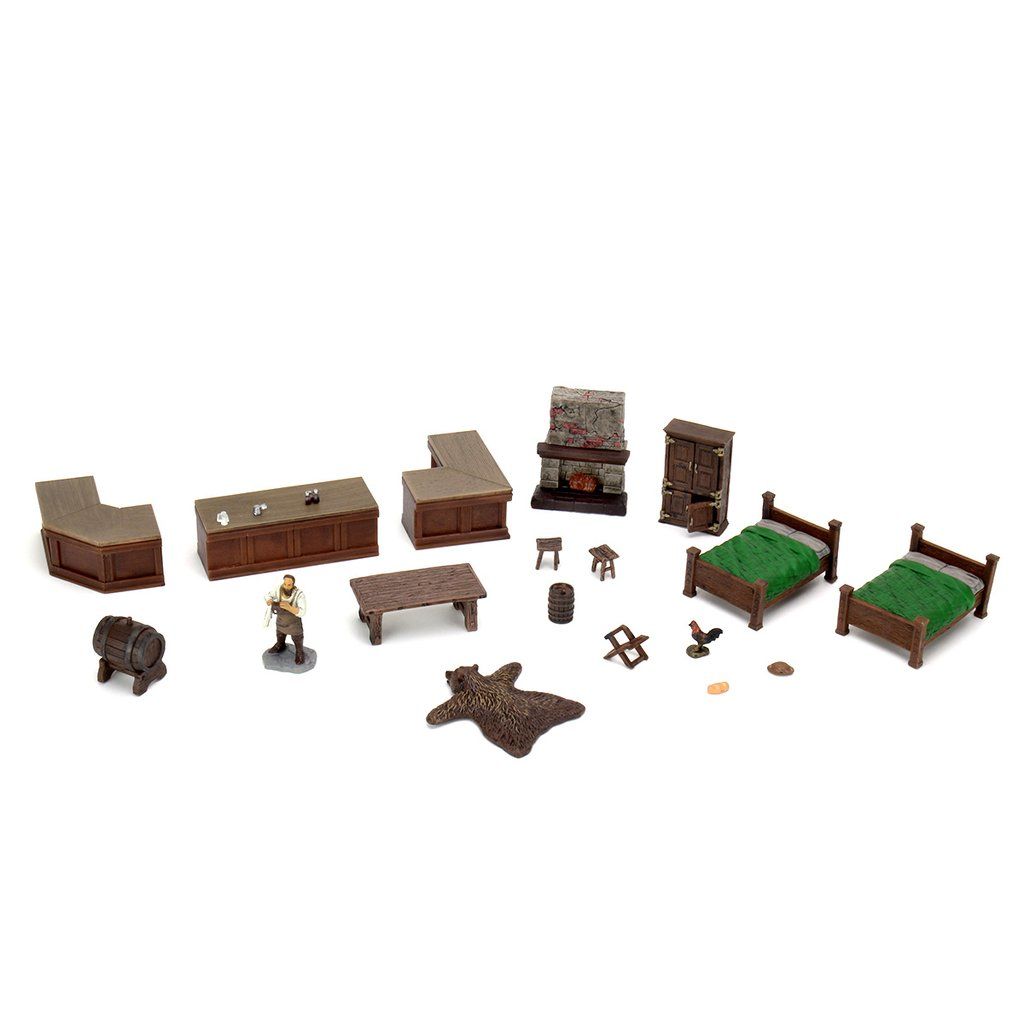 As if to answer that, WizKids has the Merchants and Town Watch sets up for pre-order. Merchants is a collection of NPC figures ranging from fisherwoman, to diplomat to bandits. There’s still a market stall and other small furniture items, but the figures are the focus. This makes it a great set for those who want to quickly throw players into a busy situation with a cast of colorful characters. And with bandit figures, there can still be combat to justify why minis have been brought out. 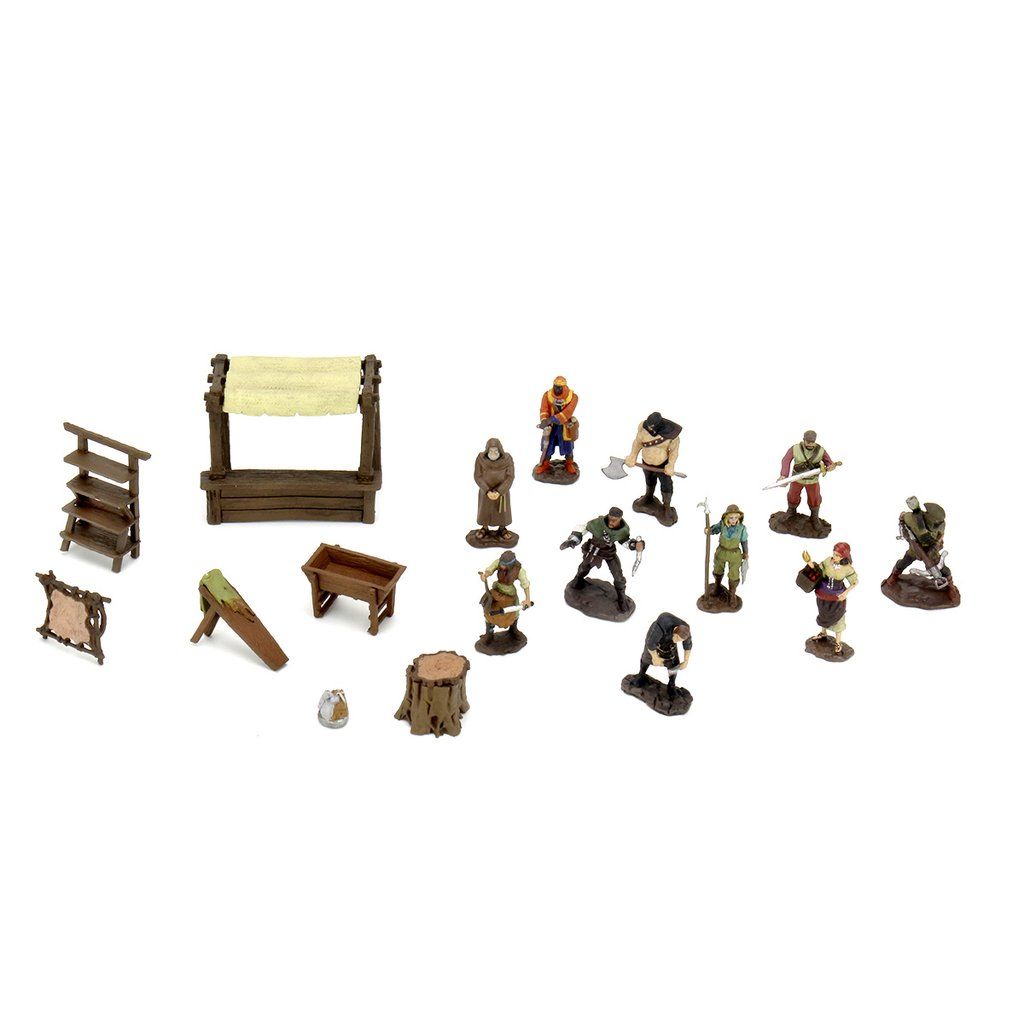 Town Watch is also figure-focused, although there is a cool blacksmith station complete with a light-up forge. 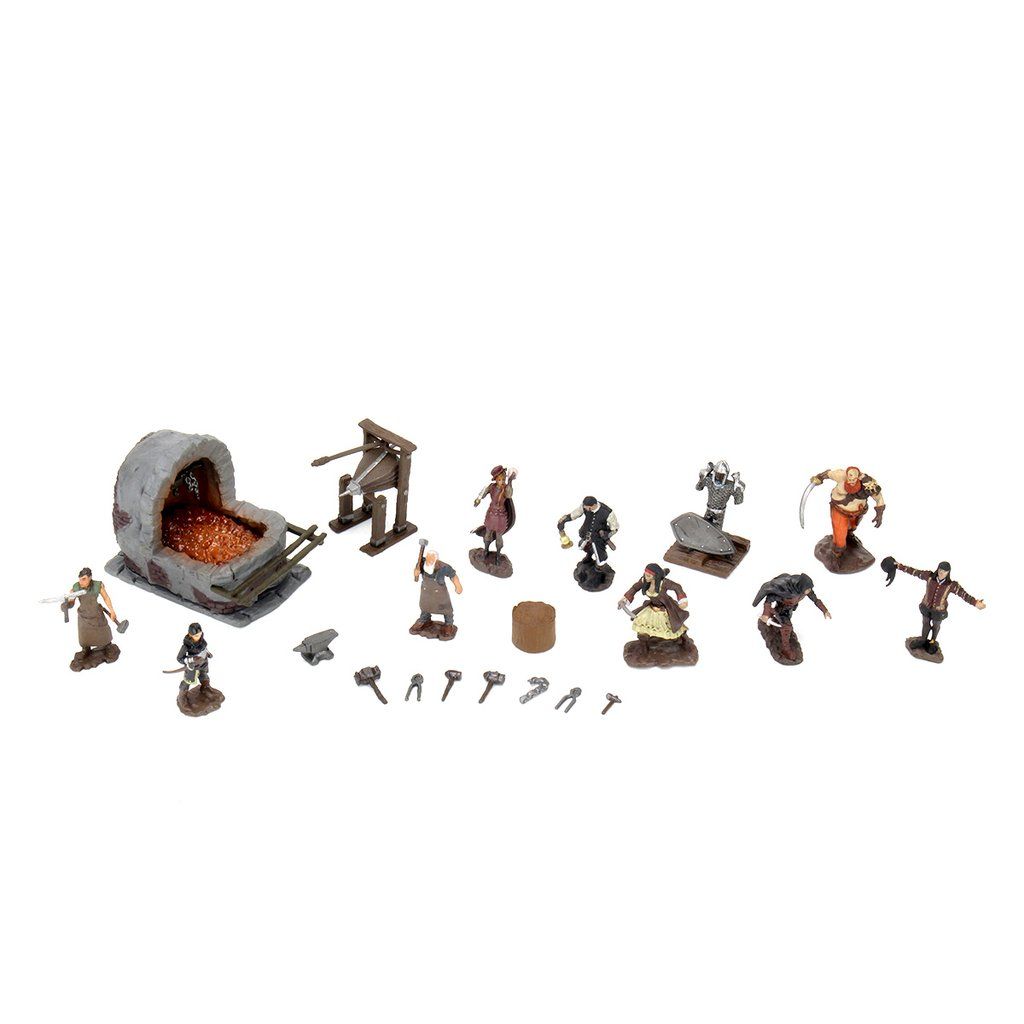 My favorite of the pack, and available now, is the Torture Chamber. While this one is designed with a very specific theme in mind, I feel like most of the pieces can still fit into more general scenarios. There are cages, fire pits, and wooden barricades. 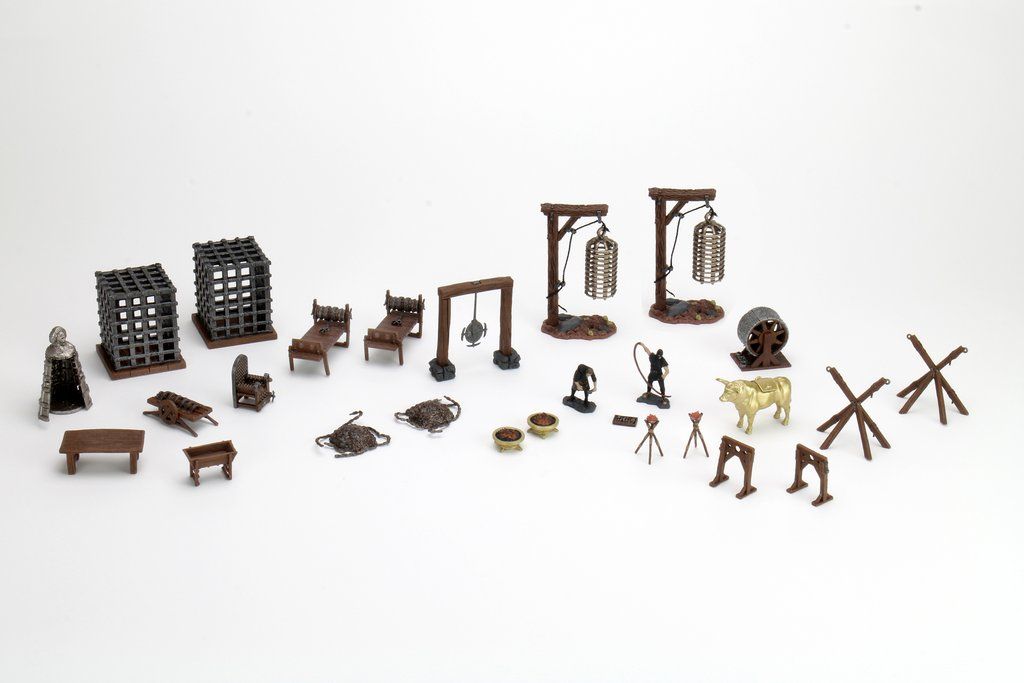 These are things that could show up in dungeon crawls, combat, or social encounters and prove useful in fleshing out the setting. That, at least in my mind, fits the purpose of WarLock.

Next: Everything I Love About Mordin, Mass Effect’s Incredible Singing Educator, And Wingman

One of each of these packs was provided by WizKids for this coverage. 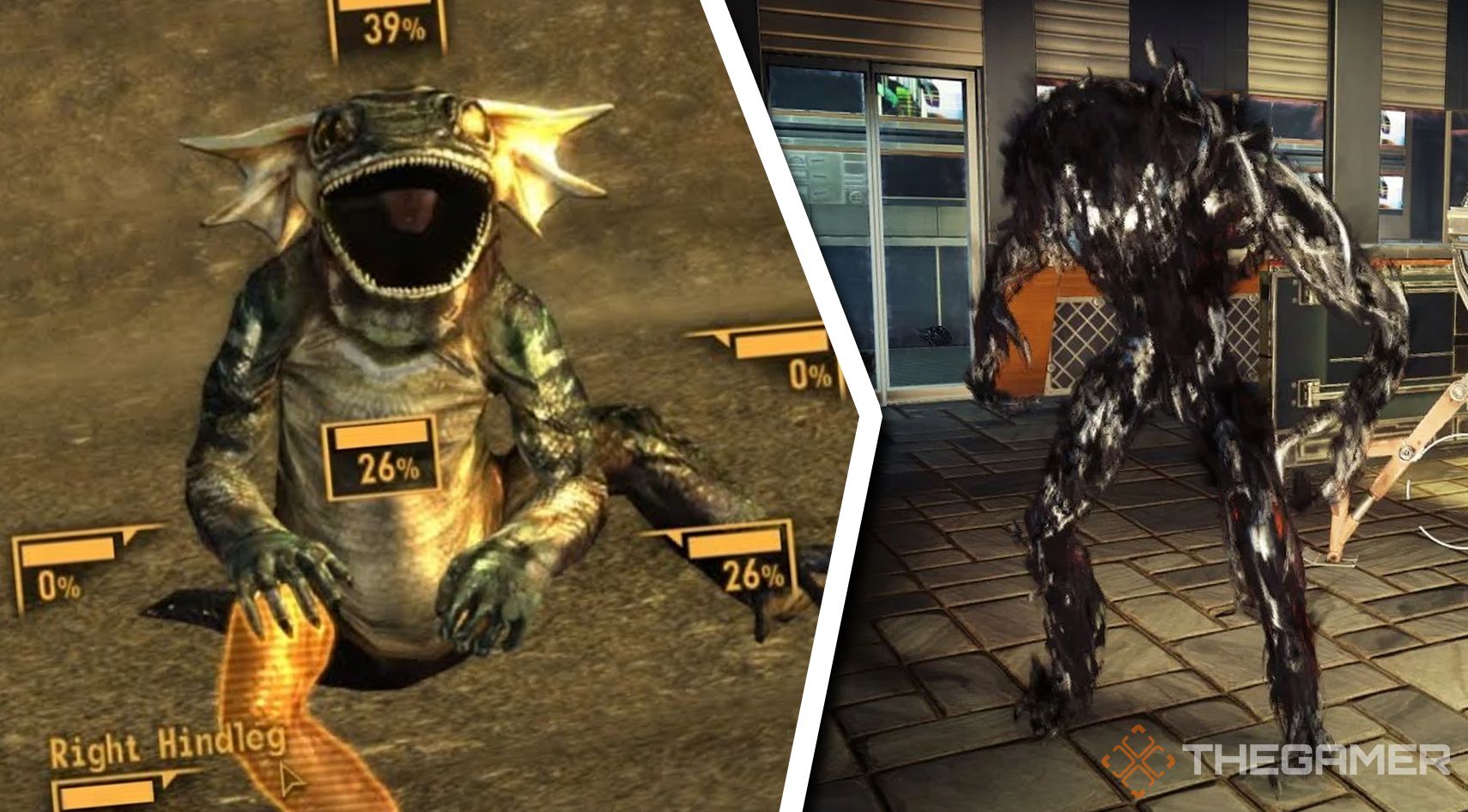