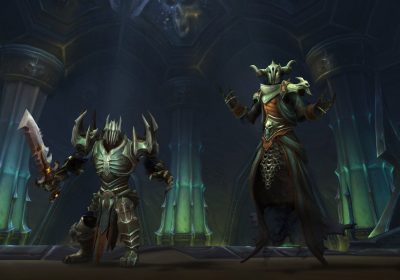 Torghast, Tower of the Damned was a great new addition in World of Warcraft: Shadowlands. A repeatable dungeon crawl with randomly generated floors, Torghast gives WoW players a currency called Soul Ash to craft legendary weapons and armor, as well as a specific section for cosmetic items. It’s also a great place to host the occasional time-limited event.

Update 9.1, Chains of Domination, has some changes coming to Torghast. No longer will the dungeon crawl be a simple race to the next floor to kill the boss. Instead, players will have to achieve a certain score threshold in order to proceed, with a score based on clear percentage, clear time, and how long players maintain a scorestreak.

Each Layer’s final score is represented by up to five gems, with 40 points providing you with one gem. You’ll need four gems, or 160 points, in order to proceed to the next Layer. Getting five gems on Layers 9 through 12 will unlock two bonus floors in the Adamant Vaults if you happen to have them unlocked as a trait in the Box of Many Things.

Most of your score is going to be based on clear percentage–that is, the percentage of enemies killed on each floor. Killing everything will get you 100 points, which is already halfway to a full five gems. Par Time is the next metric, which provides a score based on how long it takes to reach and kill the boss. Get under the time limit to score 50 more points.

Percent of Time Empowered keeps track of how long you spent the run Empowered. You become Empowered by maintaining a certain scorestreak, which basically just comes from killing things quickly and efficiently. Keep up the pace to earn another possible 50 points.

There are two more ways to earn bonus points by clicking on Souls and breaking Urns for a possible 15 extra points. So even without maintaining a scorestreak, it’s possible to keep progressing through your Torghast run by simply being thorough with each floor and defeating the boss quickly.

We still don’t have word on when update 9.1 will arrive, but it should be within the next month or so. In the meantime, practice your Torghast runs now to prepare for the update.