In case you somehow missed it, Wizards of the Coast recently announced the upcoming D&D Celebration 2020, scheduled to be held and streamed online September 18-20. During this event, WOTC will be officially introducing the next D&D sourcebook, Tasha’s Cauldron of Everything. But before the event arrives, WOTC has graciously released a series of videos with prominent online D&D players giving us previews of content from the book.

On the official Dungeons & Dragons YouTube channel, there is a playlist titled Announcing Tasha’s Cauldron of Everything. This playlist currently has seven videos with seven luminaries announcing the new sourcebook, and also describing a snippet of content info the book holds. To get the full details of what each host mentions about the incoming sourcebook, you’ll have to watch the videos, but here’s a short list to help guide you:

According to their website, Elle Osili-Wood is a professional television presenter, live stage and event host, video game voice actor (Pandora: Chains of Chaos, Paradise Killer, Second Star), and video game consultant. They mention in their video here that sidekicks are becoming official, which were first introduced in a 2018 Unearthed Arcana release, and then added in with the 2019 D&D Essentials Kit.

Burton teases in their video that we will be able to choose the element our genie patron is infused with, as well as what vessel they will dwell in. Jones (aka Critical Bard) tells us the College of Creation sub-class will also be made official for bards. DeLeve was, of course, excited to sneak us some magic item info, particularly that tattoos will soon be an official thing, akin to what we’ve seen our favorite tortle bard Orly Skiffback bestow to a few members of Critical Role’s the Mighty Nein. 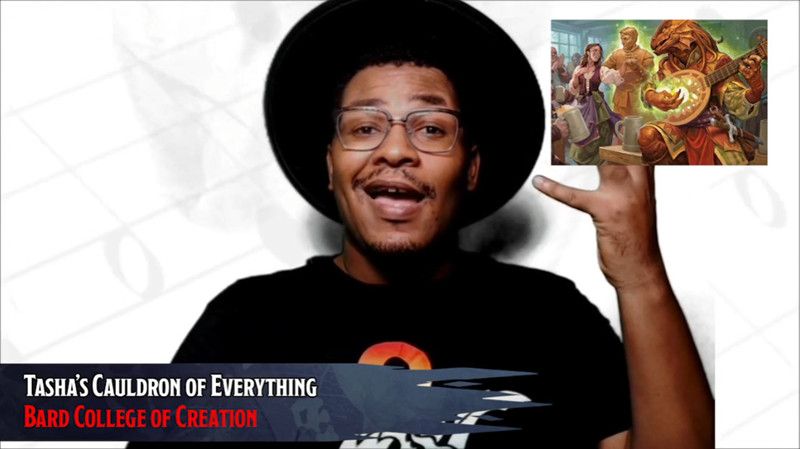 The Artificer Armorer (DePass) was also introduced in a previous Unearthed Arcana release, and the Group Patrons (Saving Throw Show) option was included in the Eberron: Rising from the Last War campaign sourcebook. Tasha’s Cauldron of Everything will make them official additions into the D&D5E ruleset. And lastly, we’ll be getting a host of new spells, with Rob from Viva la Dirt League specifically mentioning a series of nine (nein!) new Conjuration spells.