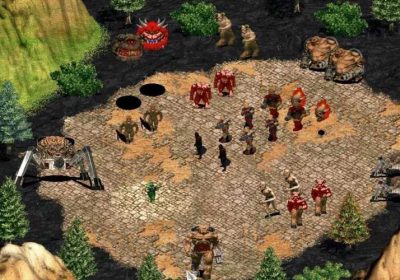 Age of Empires 2 is a fine real-time strategy game, but you know what it doesn't have? Demons. Or shotguns. Or giant spider brains that have to be taken out by nuclear-fission grenades.

Until now. Mod creator HellKnight61 (via PCGamesN) brings us the Age of Doom mod for Age of Empires 2. As the name implies, it lets you play Doom in AOE2 as a custom campaign.

That dream was achieved by taking sound effects and sprites from 1993's Doom, and then splicing that together with voice lines and the overall plot of 2003's Doom 3. Add in AOE2's isometric camera angle and various game assets like buildings, terrain, and plenty of spikes, and you've got a passable 2D-top-down version of Doom.

You control Doomguy who comes armed with the standard Shotgun before eventually upgrading to the Double-Barreled Shotgun, Rocket Shotgun, BFG, or Soul Cube in later levels. Killing zombies, floating fire skulls, or Pain Elementals is as simple as point and click. Note that there will be sudden and unexpected changes in the terrain to reflect the demonic invasion of Earth.

You'll start out at an archeological dig site on Mars before venturing to the Union Aerospace Corporation. Then you'll take the teleporter to Phobos in episode three before taking the leap to Deimos in episode four. The fifth and final episode will have Doomguy enter the Hellgate, but it isn't completed yet.

Although the mod is simple enough to figure out on your own, HellKnight61 provides plenty of supporting documentation and even an in-game tutorial for the mod. You can view this and download the mod over on its ModDB page here.