Home » News » You Can Now Solo Play Civilization: A New Dawn Board Game

You Can Now Solo Play Civilization: A New Dawn Board Game

Fantasy Flight Games recently posted a news blog piece to its website discussing the Automated Player method. Automated Player is what they are calling the ability to solo-play Sid Meier’s Civilization: A New Dawn board game, inspired by the ongoing COVID-19-enforced quarantine we’re living in.

In the Automatic Civilization post, Developer Tony Fanchi lays out the details for a new Automated Player method, which came about through FFG “digital office” discussion regarding “which of our non-cooperative games might be best suited to being played solo.” Fanchi designed the upcoming Terra Incognita expansion for A New Dawn, and said they realized “the focus row in Civilization: A New Dawn is perfect for operating a programmed opponent,” which sparked the idea and creation for the Automated Player.

As Fanchi explains it, the Automated Player (AP) works by taking the focus row of an absent player’s components and focus bar and setting it up as an actual player, with a few modifications. Basically, the focus row mechanics function very similarly to the way AI opponents do in the Civilization video games, which pretty much contains all the rules necessary for an AP to operate. 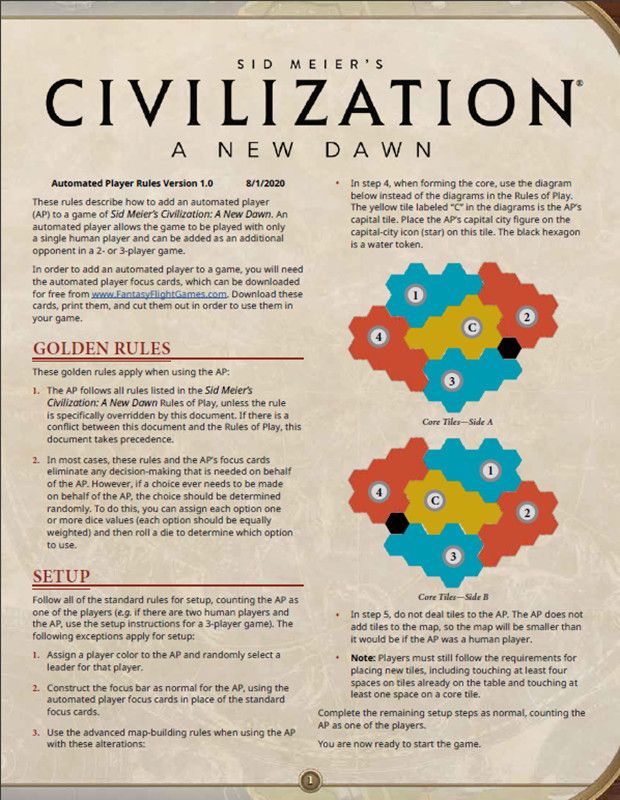 “On the AP’s turn, it will resolve the focus card in the “5” slot of its focus row and reset that card to the “1” slot. To assist with that, the AP has its own set of unique focus cards, designed specifically to remove decisions from the AP’s turn so that you won’t feel like you’re playing for the AP yourself.” In order to assist with this new AP method and make it seemingly official, Fanchi created a unique set of focus cards and wrote up a 6-page PDF of the rules, both of which are free and linked to in the post.

Fanchi continues to explain in the post how the AP can be a predictable opponent up to a point, but not really much different from a human opponent. They said the biggest difference between a human opponent and the AP is that a human opponent can and will do something that is unpredictable, such as “resolve a card lower in their focus row or choose an unexpected target for an attack.” But they also state that the AP method strikes an effective balance between simplicity and challenge. And if you want to increase the AP’s challenge level to make it a tougher opponent, the rules come with options for five difficulty levels to make it so.

Read the Automatic Civilization post for the full details on solo AP play, and get yourself a copy of the excellent Civilization: A New Dawn game if you don’t already have it.