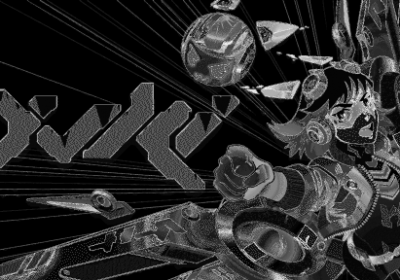 Yuki isn’t the first time we’ve seen a developer turn the classic and unforgiving shoot ‘em up (shmup) style of game play into VR, but it feels the truest to the decades-old roots of the best of Japanese arcade shooters like Raiden, R-Type, Gradius, 194X and other pivotal examples. Mixing rogue-like elements, an unforgiving permadeath foundation, and frantic flying and shooting, Yuki is an exceptional take on arcade gameplay in virtual reality.

Yuki starts off with a fanciful, very-VR setup. You’re actually a child in their room with a particular passion for manga action hero, Yuki. Yuki is a battle-angel sort of figure, with a sharp look and mechanical wings who destroys evil in a sci-fi world. You get into the action simply by picking up the beloved Yuki action figure.

Each of the six levels offers specific themes, from urban to spooky, to spacey. It’s an eclectic variety of settings and each level (or chapter) is divided between a main forward-scrolling portion chock full of enemies and obstacles and a boss fight. The farther you get, the more power-ups and weapon options become unlocked. New “bladewing” suits are unlocked by completing certain chapters and these, in turn, have specific weaponry attached to them.

What is it?: An old school shmup transformed into VR with modern rogue-like elements.
Platforms: PC VR, Quest, PSVR (later in the year)
Release Date: Out now
Price: $19.99

It’s not quite as frantically configurable as most shmups, where on-the-fly power-ups give you very different weapons, but definitely helps keep players feeling like their character is developing. In fact, character development in general is a major facet of Yuki.

In a fashion very reminiscent of other rogue-likes (especially Hades, as a recent example), Yuki can use the energy balls she collects during a playthrough to buy both permanent and temporary power-ups. This enables her to have more health, deal more damage, shoot faster, and various other skills to aid in the fight. The rub is while Yuki has hit points, she only gets one life for each playthrough. Dying means going all the way back to the beginning of the game.

Upgrades are made between runs, in the child’s room. As a result, there’s a potentially hefty grinding aspect to Yuki that will either enthrall or annoy players depending on their preferences. As someone who doesn’t care for grinding or permadeath, a straight-up more traditional arcade mode with lives, continues, and somewhat different power-up structure would have been appreciated.

Just the same, Yuki is a lot less frustrating than many other rogue-likes because the game as whole isn’t that long. Like classic shmups, the focus is on fast-paced action across levels that only take a few minutes to blast through. So, starting over isn’t a huge inconvenience.

Each new playthrough remixes the levels a bit, so enemies and obstacles aren’t in exactly the same places as before. This keeps players on their proverbial toes, but the changes aren’t so extreme and random that the levels feel overhauled each time. Also, boss fights remain consistent each time.

Players control Yuki using one hand, swooping, twisting, shooting, and maneuvering her through storms of bullets and a range of crazy environmental obstacles as if you’re literally playing with an action figure. Massive rotating fans must be veered around, giant thorny trees passed under, and falling building debris deftly passed through. All this fancy work must be done while also avoiding hundreds of bullets and collecting energy balls and power-ups drones.

To help with the collecting part, the other controller/hand is Yuki’s friendly drone companion. It has a rechargeable freeze bomb attack, but otherwise can’t help with enemies. The drone can, however, collect any power-ups independently of Yuki. In reality, this means wildly waving both arms around to grab all the goodies, as Yuki avoids damage and shoots everything.

Shmups were always a strange contradiction of intensity and zen gaming, requiring precise reflexive movements and utter concentration, but putting that gameplay into VR makes for an astoundingly multi-faceted play experience. Yuki requires players to be aware of everything around them, while making sure each hand is accomplishing a different goal. You don’t have to use the drone. Yuki can collect everything herself, but as crowded as the screen gets with danger, collecting things with the offhand is a welcome ability.

The entire game has a lower-poly aesthetic, but in a way that doesn’t detract from the detailed models. Yuki is particularly well-rendered, but the whole game looks excellent. The soundtrack is quite good as well, if generally minimalistic. The only potential complaint in the overall game is how Yuki’s aiming always felt just a little off, especially at higher, tighter angles. It was a minor thing to adjust to though.

A shmup in VR is, for fans of this nostalgic genre, a brilliant idea. Yuki was clearly made by people who loved those old-school games. Yuki nails the intensity and feel of a proper vertical-scrolling shooter, the rogue-like aspects add a substantial layer of character progression, and the random generation elements keep things exciting.

For more on how we arrived at this rating, read our review guidelines. What did you make of our Yuki review? Let us know in the comments below!