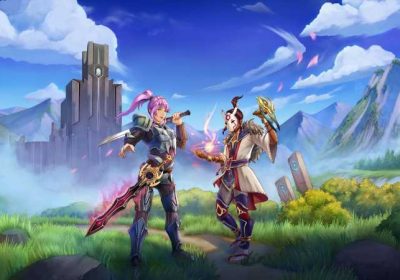 Developer Ramen VR has attracted a great deal of attention from virtual reality (VR) enthusiasts since the release of Zenith: The Last City, with the game even briefly hitting the top of the Steam player charts.

Though still in Early Access, fans are hopeful that Zenith represents a step towards the fully immersive VR MMORPG popular in fiction. To explore the ideas, influences and future plans for Zenith: The Last City, Upload VR spoke to Andy Tsen, CEO and co-founder of Ramen VR.

Ramen VR itself is a small business for an ambitious project like Zenith: The Last City, employing only 15 people. Tsen was frank about the challenges the developer faces and meeting people’s expectations: “When we launched Zenith, there were a lot of people who expected Sword Art Online or World of Warcraft. We’re more like Ultima Online, a few guys trying to create something we’re passionate about.”

Comparisons to media about VR MMOs such as Sword Art Online or .Hack is inevitable, and Tsen said that anime and Japanese culture did indeed have a significant influence. “The inspiration for the game comes from every game that I’ve played,” he says. “Anime was a large part of my formative years, so we took ideas from Final Fantasy XIV, World of Warcraft and even Nier. We wanted to create a world inspired by anime and JRPGS. You can see it in the open world, such as the Plains area, we reference a lot of Miyazaki and a lot of Nier.”

Speaking about the tone and genre of the game, Tsen had this to say: “If you look at the city we have a solarpunk going on, while the starting area was inspired by Midgar of Final Fantasy VII and a lot of other cyberpunk media. There are sci-fi elements to it, but it’s very fantasy inspired, but it’s going to be more solarpunk themed and styled than cyberpunk.” He also indicated that in storyline terms, it won’t be so black and white as ‘the bright happy place is good, the dark spooky place is evil’. There will be nuance and subtleties for players to discover as the game world is expanded and refined. There is also a tendency for Solarpunk media to be more optimistic in tone than the more grungy and bleak Cyberpunk media.

A common criticism of many modern MMOs is that intuitive, fun gameplay can be lost amidst a sea of complex systems, rewards and currencies such that it becomes more akin to a job than a game played for fun. “I think a lot of the immersion has been lost in modern MMOs,” Tsen commented on that topic. “Our goal was to create an immersive world where people could reach their full potential, without worrying about what’s going on in the real world. It’s a gaming-focused new reality. We want to focus on making fun experiences for people.”

Asked about how that feeds into accessibility for players, Tsen said that the team ensured it was possible to play Zenith from a seated position, then added: “A lot of times accessibility is just good game design. You don’t lose anything by making a game more accessible.” He indicated that this is just a starting point for Ramen VR, and that they are keen to integrate accessibility into the game during the Early Access phase, saying for just one example: “We had to work with some of our team who get very simulation-sick, so we came up with things like our out-of-body locomotion to mitigate that.”

Tsen also said this focus on accessibility extends into online safety and comfort within the game, emphasizing the tools given to players. “You can block people, or you can deafen. For us safety is incredibly important. We have GMs who can invisibly wander the world and make sure everything’s okay,” he said, adding that bots have limited effectiveness when protecting a community. “There’s only so much you can do with automation, so you always need human judgment involved.”

Tsen also stated Final Fantasy XIV as a worthy example to follow, because Square Enix implemented positive reinforcement systems that allow players to issue a commendation to fellow players who impressed them during a Duty, Dungeon or Raid. This works as a counterpoint to blocking and reporting systems to help foster community, something that Ramen VR also hopes to develop for Zenith.

Ramen VR has already promised to add hundreds of hours of new content in its next major update patch, and Tsen spoke enthusiastically about what Zenith players can expect in the future, “There’s a lack of end-game content at the moment. We need to do a lot more. In our next major content update our goal is to address that, and expand it so there’s things for casual players to do, things for hardcore players or those who want to just grind for cosmetics.”

Indeed, Andy also indicated during GDC that there were plans to add more exploration and environmental puzzles, but that’s not the only thing the development team has planned: “We’re excited about player housing, crafting, even PvP – that’s a little down the line though. What’s currently available for Zenith is only about 10% of what we want to provide for our players.”

Considering that Zenith has already met with a solid response from the Upload VR review in its current Early Access state, what the 90% of additional content could provide is worth considering. Creating an MMO is not an easy task, and plenty of developers have failed to clear the hurdles involved with growing a small company in a sustainable way.

Tsen hopes they can continue to grow and meet the challenges implicit in creating and maintaining an expansive MMORPG. “We have great investors, we’re cash-flow positive, but the next big question is how to scale it while keeping the culture that’s got us this far.”

Zenith: The Last City is available on Quest, Steam and PlayStation Store.