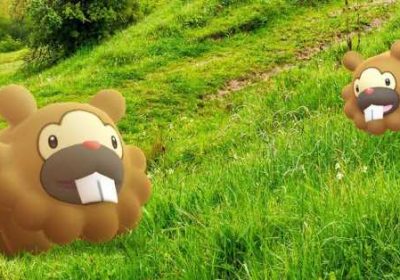 Thursday, July 1 is officially Bidoof Day, The Pokémon Company announced in a tweet on Monday. The tweet asks players to join the Pokémon account for a day of “Bidoofery” (???) and to “stay tuned to our social channels all week to find out the many ways you can celebrate Bidoof with us.” The tweet left off with a subtle #BidoofDay hashtag.

The threatening tweet leaves us with more questions than answers, primarily “why?” Why does Bidoof get its own holiday? Why July 1? Where is Mudkip Day? We refuse to even ask what “Bidoofery” is, but it sounds gross.

For those not in the know, Bidoof is a Pokémon modeled after a beaver. It’s Pokémon number 399 and is officially classified as the “plump mouse Pokémon.” Bidoof debuted in the fourth generation of Pokémon, first appearing in Pokémon Diamond and Pokémon Pearl. It’s a Normal-type Pokémon that players usually find very early on their adventure. It evolves into Bibarel at level 15, adding a Water type and offering very wide eyes, like a Bidoof that’s seen some shit in its first 15 levels.

This is not the first Bidoof Day, and it likely won’t be the last. Bidoof has been somewhat of a meme for years, and it got its own day on Oct. 22, 2018. This coincided with Pokémon’s fourth generation being added to Pokémon Go. Bidoof is currently in the thralls of its own special event for Pokémon Go, which started on June 25 and ends on July 1, which we all celebrate now as Bidoof Day.

It’s currently unclear what the Pokémon account is teasing with Bidoof Day — or if it’s teasing anything at all. With Bidoof being one of the silliest and most common Pokémon from the fourth generation, it’s possible Bidoof Day could herald some news around the Pokémon Brilliant Diamond and Pokémon Shining Pearl remakes coming to Nintendo Switch on Nov. 19.

It seems we’ll find out more about what the Pokémon account has up its sleeves — as well as what the hell “Bidoofery” is — this Thursday.