Home » Nintendo » Unpacking has 14,000 audio files just for picking things up and putting them down

Unpacking has 14,000 audio files just for picking things up and putting them down 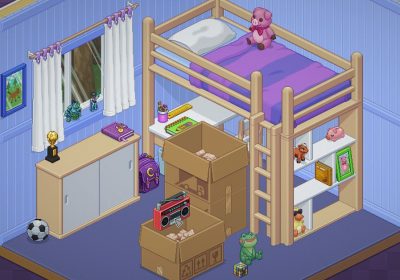 On the surface, Unpacking seems like a simple game. You’ve got one goal: Unpack and organize various rooms from throughout a person’s life. You’ll start in your own bedroom, move into your college dorm, and eventually graduate to larger apartments and houses.

Each of the game’s levels begins with mostly empty rooms and a bunch of sealed cardboard boxes. Clicking on a box will pull out a random object from that box, which you can then place anywhere you wish. There are some rules regarding which objects can go where (e.g., toilet paper in the kitchen is a bad idea), but generally speaking you have a lot of creative freedom to determine where stuff goes. (For what it’s worth, truly free spirits can turn off those room-specific rules in the settings.)

Now, most games would probably just have a default “thud” for placing an object somewhere, but the developers behind Unpacked decided to take things a bit further. Every object you pick up has a unique sound associated with it. A tube of toothpaste, a pair of jeans, and a cooking pot will each sound different as you pick them up. And there are hundreds of items in the game.

That’s just the beginning of the developers’ commitment to the aural accuracy of unpacking your room. Whenever you place an object down, it’ll have a separate unique sound depending on the surface you’re placing it on, and the object’s weight and material.

Later in the thread, he explained the rationale for going so hard. “The game has a lot of space and time for audio,” van Dyck said. “There’s a sort of impressionistic vibe from the pixel art, visual detail that isn’t there due to the resolution (which gives it its retro charm). This gives us an opportunity to add that detail back via the sound design.”

The upshot of this effort is that the whole package feels far more tactile and grounded, like you’re actually unpacking these rooms in real life. And it’s an incredibly meditative, soothing experience.

Unpacking is available now on Linux, Mac, Nintendo Switch, Windows PC, and Xbox One (including via Xbox Game Pass).