Cube World was never going to live up to the hype

Voxel exploration game Cube World is at top seller on Steam right now, but all is not right in its pastel-colored biomes. Despite millions of views on YouTube and on video game websites back in 2013, when the game first blew up, current reviews are mixed. The Steam forums have been a shitshow, with a bevy of locked threads and confused, angered fans. On Reddit, fans keep having conversations about how to best convey their disappointment without getting too toxic.

The reasons for this backlash are wide and varied. Most notably, players say that the progression system — which ties gear to the region in which it is found — is a headache. The difficulty also seems to be all over the place, with players noting that it often makes more sense to run away than engage. The throughline among the complaints is this: Somehow Cube World has allegedly gotten worse in its eight years of development, rather than better. (Cube World was unveiled to the public in 2011, but did not go viral until around 2013.)

For most games, this progression would be baffling, especially for a title that’s had both an alpha and a beta that presumably existed to get feedback and improve the overall experience. So, how did this happen? While developer Wolfram “Wollay” von Funck has seemingly disappeared off the face of the Earth since Cube World’s release on Steam, posting nothing on social media and even deleting his development blog, a stark picture has emerged.

Back when Cube World initially blew up, Funck was not prepared for the attention. The website hosting the game went down. Rather than beefing up his servers, Funck went on to stop selling the game altogether. He seemed spooked by the reception, especially since the load on the website seemed to come from a DDoS attack. Still, most developers would look at all that hype and think up of ways to capitalize on it, if not keep it going. 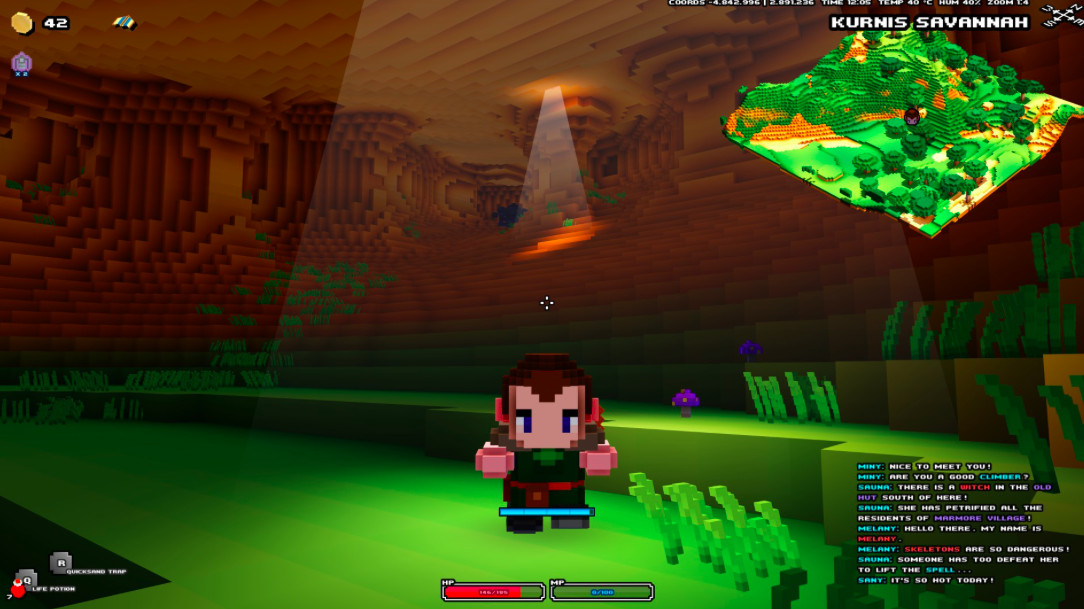 Not Funck. For years, he barely updated any of his fans on what was going on. They’d go months without hearing a peep about what was happening in Cube World, though he kept assuring fans that he was indeed working on it. Once in a blue moon, Funck would share some new footage and screenshots before receding back into the development mines. Cube World stayed alive in the public consciousness, but as a faraway curiosity. Everyone wondered if it would ever come out.

This year, Funck surprised everyone by releasing an updated beta and, later, announcing an actual release date. Folks got excited … until they played the new version of the game. The evolution of the game seemed inexplicable, unless you understood just how much the attention affected Funck.

“It might sound silly, but [the DDoS incident] traumatized me and kind of broke something inside me,” Funck wrote on his now-deleted blog. “I never told anyone about it, and I don’t want to go into the details, but I’m dealing with anxiety and depression ever since.”

Picroma, the development team behind Cube World, is composed of two people: Funck and his wife. Having millions of expectant eyes on you is stressful under any circumstances, but it was especially intense for Funck, who had to shoulder the attention on his own. While Funck didn’t respond to a request for comment, it seems clear that Cube World’s hype made the developer self conscious about meeting expectations.

“Social media didn’t improve [the anxiety and depression,] as you might imagine. I’m still not sure if it’s a good idea to tell the world about it, but I wanted to give the fans an explanation,” Funck continued on his blog.

“There were several points in the past years where I considered releasing an update, but every time I was afraid it wasn’t good enough. I’m also a bit pefectionist [sic] and it made me rework everything from scratch several times.”

This isn’t a phenomenon unique to Cube World. Iconoclasts, an action platform developed by Joakim “Konjak” Sandberg over the course of eight years, also proved to be an alienating experience.

“It’s not healthy to make a game on your own,” Sandberg told PC Gamer in 2018. “I built up resentments and worries on the way, that Iconclasts was weird, too specific to me. I didn’t know how people would react to it, which I think is normal, but I worried.”

Would things have been different had Wollay developed a more constructive relationship with fans? Probably not. When Cube World was first unveiled, fans saw it as a dream game where anything was possible. After all, it was procedurally generated. Maybe it would turn out to be a Minecraft killer? Some devoted players went on to play the pre-alpha version of Cube World every day for years. Cube World was No Man’s Sky before No Man’s Sky; a humble indie development where fans hoped to find their forever game. Nothing that Wollay could have come up with could possibly match the eight years of pie-in-the-sky anticipation. For him, Cube World was a passionate hobby project. For the rest of the world, Cube World was everything.