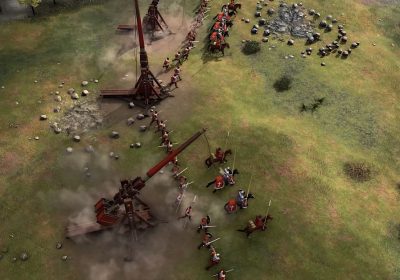 Trebuchets — “the ultimate medieval siege weapon,” not the sans-serif typeface created by Microsoft — are coming to Age of Empires 4 and players will be able to learn all about them in the game’s “Hands on History” segments, developers World’s Edge and Relic Entertainment announced at Gamescom 2021 on Tuesday. Adam Isgreen, creative director at World’s Edge, offered a (very) deep dive into the fan-favorite, highly memed trebuchet during Xbox’s Gamescom stream, as a way to teach players about medieval history.

Age of Empires 4 will include 28 unlockable Hands on History videos, each of which was “filmed on location with experts around the world.” In the case of ye olde trebuchet, mechanical engineer Dr. Shini Somara explained how the don’t-call-it-a-catapult works at Warwick Castle in England during a three-minute-long segment shown at Tuesday’s livestream.

World’s Edge and Relic showed off the Age of Empires 4 trebuchet in action in-game last week, in a trailer that offers a short but satisfying burst of projectile lobbing and castle sieging.

They’ve also shown off other weapons of war coming to Age of Empires 4, including the Nest of Bees, which I only learned about today and was crestfallen to discover does not shoot actual bees.

Age of Empires 4 launches on Oct. 28, on Windows PC via Steam and the Windows Store. It will be available for Xbox Game Pass for PC on launch day.