Blizzard will start testing World of Warcraft: Battle for Azeroth’s 8.2 patch, Rise of Azshara, next week, according to senior game designer Jeremy Feasel. This update was first announced at BlizzCon 2018, and will give players the chance to face down Queen Azshara in the underwater city of Nazjatar. But more importantly, patch 8.2 brings a major rework to the Heart of Azeroth system.

In the Rise of Azshara, players will gain access to the new Heart Forge, which they can use to augment the Heart of Azeroth amulet given to them at the start of the expansion. Players can socket powerful new abilities called Essences into their Heart of Azeorth.

The Forge creates three new Essence ability sockets on the Heart of Azeorth. Players can earn Essences from a variety of different activities, and then slot them into the three new sockets. Essences are unique, and each one has a passive and active element to it. 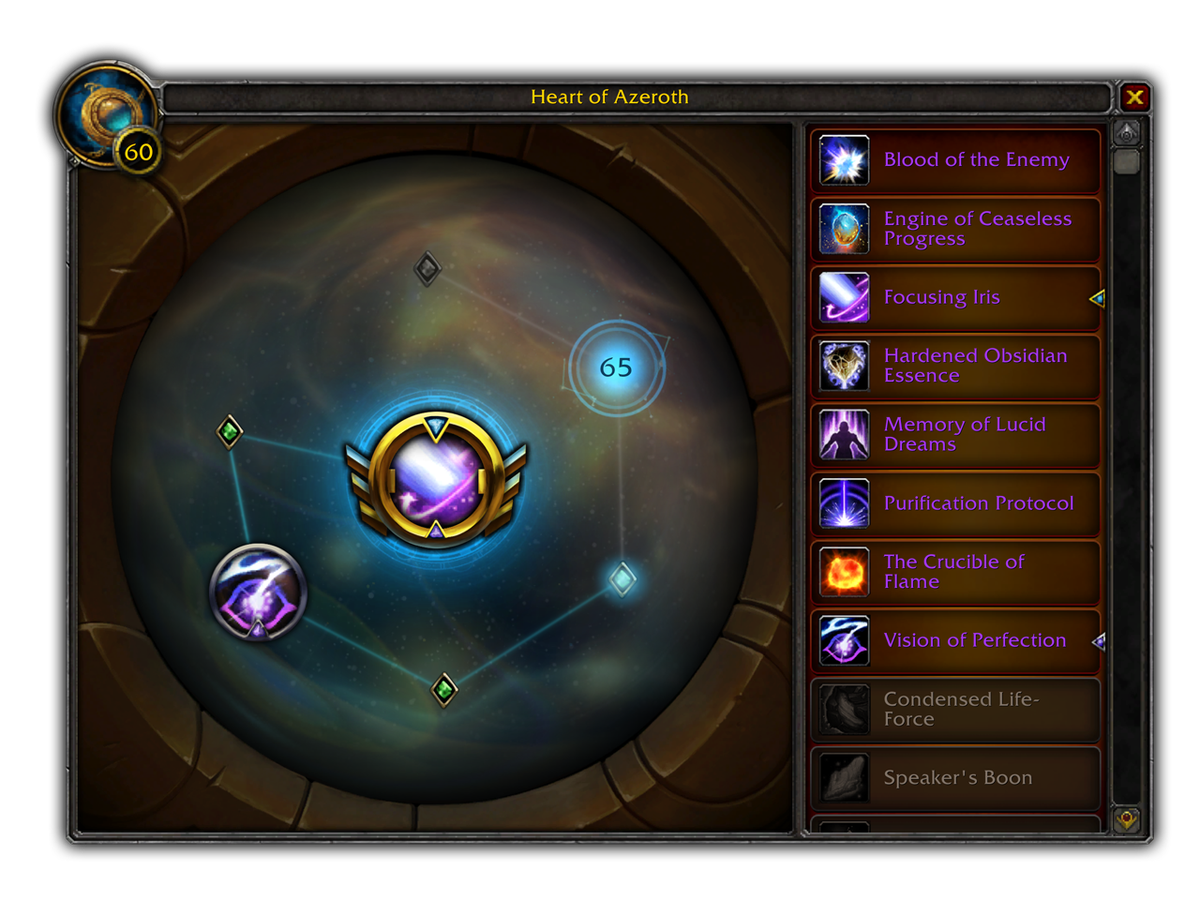 While not class-specific, the major and minor abilities are powerful additions for player characters. Here are the three examples Blizzard has already shown off:

Major Power (40 yard range, instant cast, 4 minute cooldown): Create a time vortex around a friendly target that absorbs 496,932 damage and 496,932 healing for 6 seconds. When this expires, the absorbed damage and healing occurs periodically over 10 seconds.

Minor Power: Your heals have a very high chance to grant the target 304 Haste for 8 seconds.

Major Power (0.8 second cast, 1.5 minute cooldown): Focus excess Azerite energy into the Heart of Azeroth, then expel that energy outward, dealing 126, 700 Fire damage to all enemies in front of you over 2.7 seconds.

Minor Power: Every 2 seconds, the Heart of Azeroth absorbs nearby latent Azerite energy, increasing your Haste by 29, stacking up to 10 times.

Major Power (Instant cast, 2 minute cooldown): Draw upon your own vitality to sear your foes, sacrificing 10% of your maximum health to deal Fire damage to all nearby enemies equal to the health lost.

Minor Power: Azerite energy courses through your veins, increasing maximum health by 3,430 every 4 seconds, stacking up to 10 times. This effect is lost if you fall below 35% health.

There look to be at least 11 Essences, and each come from their own source. Depending on the Essence, players may need to raid, PvP, or complete a simple world quest to collect them. Essences also have different ranks. The first rank is the least powerful version of the active or passive bonus, with ranks two and three increasing their potency. The fourth rank is purely cosmetic, and adds a visual flair to the active spell.

In its blog post, Blizzard barely touches on the future of Azerite Armor. This new Essence system works alongside the Azerite Armor already in the game. However, there will be a few new traits for players to use.

We’ll learn more information about where players collect Essences when Rise of Azshara hits the Public Test Realm. Blizzard hasn’t announced a date for when patch 8.2 will hit live servers.