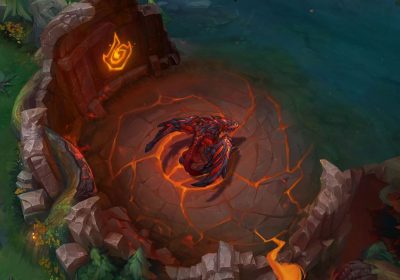 Riot Games has revealed some of the changes fans can expect in next year’s League of Legends season. Riot released its preview post on Wednesday, which detailed changes to items and Elemental Rifts, and the new addition of out-of-game challenges for players to unlock.

The first new change that Riot previewed in its post relates to the dragons of Summoner’s Rift. The elemental dragons are sticking around, but their terrain changes are getting even more drastic. After the second dragon dies, and the map shifts to the element of the third dragon, the environments will change in even more varied and extreme ways than they do now.

Riot’s other major change to League’s existing systems will come to the game’s items. Last year, Riot reworked most of League’s items, in order to make player’s choices more impactful. This time around, Riot says that it wants to pull back on that idea a bit, attempting to make the Mythic item choices meaningful, while not forcing players to make decisions about Legendary items that ultimately don’t matter much.

League of Legends is finally having its Avengers moment

There are a few other game systems getting tweaks in the 2022 season as well, such as Runes, which are getting a few major changes, including a full rework to the Inspiration keystones. Riot is also adding new objective bounties, which will give teams that are behind additional gold for destroying or killing certain objectives — just like Champions bounties in the current game.

Outside of the matches themselves, Riot is trying to make League of Legends a more rewarding game with the introduction of Challenges. Challenges are a new system of specific tasks, which players can complete to earn certain bonuses and rewards. Of course, all of these rewards will be cosmetic only. To help take this concept even further, Riot is looking into new ways to help players show off their favorite champions on their profiles, and to help give players more of a sense of identity within the League of Legends experience.

This is just a preliminary look at the changes that will be coming to League in 2022. As the new seasons gets closer to its preseason launch later this year, Riot will reveal more information, including some of the specific updates players can expect in season 12.