World of Warcraft’s latest patch is all about tackling the Lovecraftian Old God N’Zoth, which is pretty cool… if you’re a nerd. Personally I’m here for Wrathion, a Machiavellian dragon with a new model and a sassy attitude.

Wrathion is a huge breath of fresh air in the World of Warcraft universe, and I’m here to explain who he is and why he absolutely slaps.

In World of Warcraft, dragons are a major force. They follow Power Rangers rules, and are color coded into flights: red for life, green for dreams, blue for magic, yellow for time, and black for the earth. The leader of the black dragons was corrupted by the Old Gods deep within the planet and turned evil. That’s Deathwing, the main boss of World of Warcraft’s Cataclysm expansion and the guy who tore up the planet and changed many of the zones in Azeroth forever.

The vast majority of the black dragons we’ve encountered in World of Warcraft so far are corrupted; they follow the Old Gods on a level that is implied to be intrinsic, not just a matter of choice. Over the course of World of Warcraft, we’ve murdered tons of corrupted dragons.

There are a couple of exceptions, one of whom is Wrathion. He is alive, uncorrupted, and now styles himself as the Black Prince and Deathwing’s son. (He’s not, biologically, but that’s a whole other thing.) Players have been working with him to some degree or another since Cataclysm, and while he’s only a baby in dragon years, the mortal human form he uses to talk to players and enter buildings is that of a grown man.

In Mists of Pandaria, the expansion after his debut, he was scheming behind the scenes to prepare for a fight against the Burning Legion, the longtime demon army enemy we defeated in Legion. He vanished from the scenes for a while, appearing only in test content that would eventually be cut. Wrathion has re-emerged for the Old Gods, since they corrupted dear old dad.

He’s also handsome and sassy, so he steals every scene he’s in, and it’s great. For example, in the scene below he manages to make getting punched in the face look cool.

Throughout Warlords of Draenor, we free an alternate version of the evil orc warlock, Gul’dan, who escapes back to our timeline on Azeroth. Gul’dan then brings the Burning Legion back for the next expansion, Legion, and kicks the invasion off on the Broken Shore with a sneaky ambush for all of the players and their accompanying armies. Both High King Varian Wrynn and Warchief Vol’jin died in the attack.

Wrathion was nowhere to be seen throughout this entire ordeal. Despite starting the time-travel shenanigans that led to the planet he was trying to protect being invaded by an evil demon army, he wasn’t around to help stop it.

He’s only showing up now, in Battle for Azeroth, after some foreshadowing in the previous patches.

After Anduin Wrynn decks him and blames him for the death of his dad on the Broken Shore, Wrathion tells us he’s here to help. After all, the Old Gods corrupted his dad, so now he’s here as an advisor to help us iron things out. He even has a nifty new cloak for us to equip! 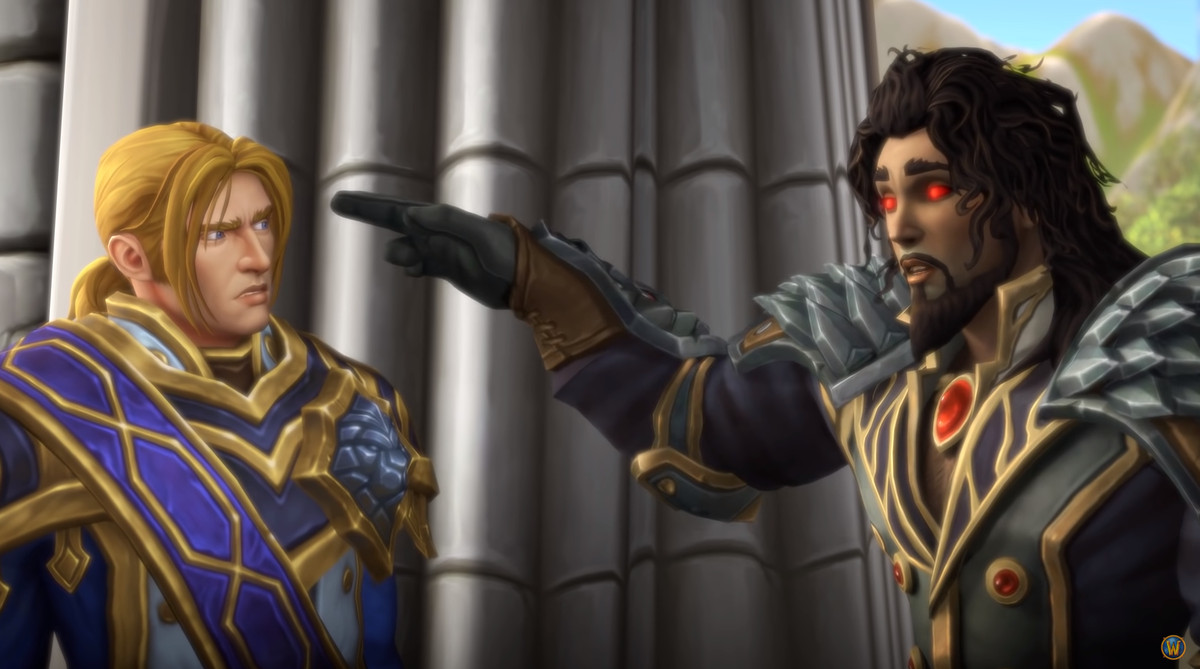 This guy’s great … and also a dick

Wrathion is a moderately powerful being in World of Warcraft, and turning into a dragon is neato. But what makes him really great is the fact that he’s kind of a dick. Wrathion isn’t petty; he really wants to protect the world and live up to the legacy of his father’s original job as Earthwarden.

The problem is that Wrathion is absolutely terrible at achieving any of this. He likes to craft Rube Goldberg-style plans that immediately crumble. In Mists of Pandaria, his first idea was to influence the war between Alliance and Horde and ensure that one side would win, leading to a “united” Azeroth.

This didn’t work, so Wrathion stepped up his game. He went ahead and busted the expansion’s big bad, Garrosh Hellscream, out of jail. Garrosh, the Horde’s Warchief, had been steadily spiraling for a year or two in game, turning into an orc supremacist bent on lots of genocide. Wrathion took Garrosh back in time to an alternate universe, with the goal of creating lots of alt-universe armies. Garrosh immediately went rogue and Wrathion’s plan went bad, leading to the events of both Warlords of Draenor and Legion.

After this little oopsy-whoopsie, Wrathion finally shows back up to greet Anduin and call him an old friend. It’s like if I borrowed my buddy’s car without permission, took it on a joyride, broke a war criminal out of jail, and then went off the grid while that whole mess got sorted out … only to re-emerge at my buddy’s kegger, expecting to be welcomed with open arms.

There’s even a scene in-game where the player and Wrathion find an experimented-on, seemingly near-death dragon. After finishing the quest, Wrathion peaces out … leaving his dragon relative to pick himself up off the floor, shake the whole “near death” thing off, and fly the player to the next quest objective.

Flawed characters are great. Characters with swagger, who fill a room with their personality, are also great. Wrathion has both of these qualities. In World of Warcraft, characters constantly succeed, mowing through problem after problem via killing raid bosses. Meanwhile Wrathion fails, constantly and to grand effect. I love him for it.