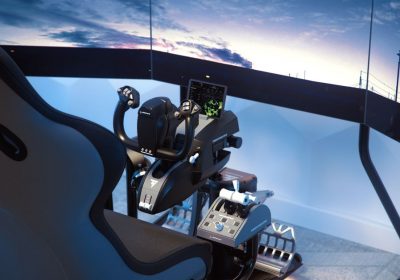 Microsoft Flight Simulator is a hit, thanks in no small part to its compatibility with Xbox Series X. But, until now, fans were very limited in the controllers they could play with on consoles. That will change later this year, as controller manufacturer Thrustmaster announced Tuesday that its new TCA Yoke Boeing Edition controller will go up for pre-order on Tuesday, Nov. 9.

It’s expected to arrive with consumers by Dec. 23, meaning Xbox players should be able to fly with it before Christmas.

The Boeing yoke is a one-to-one replica of the control yoke of a Boeing 787. Where other devices rely on a stainless-steel shaft that plunges into the dashboard, this yoke uses a pendular system. It rocks back and forth on a pivot to control the pitch of the aircraft, just like it does in a real airplane. It’s also coded with the requisite Xbox buttons, which should make learning to use it easier on consoles. There’s even a built-in 3.5 mm audio jack.

Thrustmaster has gone further, creating a modular throttle quadrant to match. Chaining two of them together with the yoke, it’s possible to recreate the controls needed to fly even the largest airliners in Flight Simulator, with independent control of all four engines.

All of this comes at a fairly steep price, however. The TCA Pack Boeing Edition, which includes the yoke, a single throttle quadrant, and a mounting bracket for that quadrant, will cost $499.99. Pre-orders start today with shipping expected by Christmas. An additional throttle quadrant will cost $149.99. Pre-orders for that also start today with shipping expected by Christmas. (Note that the quadrant alone doesn’t come with a mounting bracket.) The yoke alone (which also includes sliders to serve as throttles) will cost $399.99 and won’t go up for pre-order until early 2022.

You can find more information on the official Thrustmaster website. Expect pre-orders to go quickly.