During my first co-op session a few days ago, my partner (fellow IGN reviewer TJ Hafer) and I died in a certain dungeon in about 20 hours into the questline in such a way that we were locked out of a main town – where the rest of that quest, or at least the next step, was to take place. Because we’d been framed for a bomb going off, the guards threw us out and barred re-entry. Due process? Not in a fantasy RPG! Was there any warning that such a thing might be a consequence for suffering my roughly 101st death to Outward’s awful combat and terribly balanced enemies? Nope!

When I say Outward doesn’t deserve to be mentioned in the same breath as Sekiro or Dark Souls, it comes from someone who would know.

To be clear, I’m no slouch at combat. Between sessions of Outward, I’ve spent a fair amount of time with Sekiro these past few weeks and I’ve found that challenge manageable and rewarding. TJ has burned through even more of FromSoftware’s latest tough-but-fair test of skill, and, if anything, seems to be loving it even more than I am. Together, we’ve played hundreds of hours of Bloodborne and Dark Souls and have had a very effective co-op partnership for literally decades. So when I say Outward doesn’t deserve to be mentioned in the same breath as Sekiro or Dark Souls, it comes from someone who would know. Its combat is clumsy and slow, its progression non-existent, its skills next to useless, and its balance feels off on a fundamental level. Additionally, there’s no sense of empowerment; Sekiro puts you in the shoes of a trained ninja with agility and guile and asks you to meet its enemies on its terms, with creativity, skill, and timing. Outward casts you as a generic villager from every small fantasy town ever, gives you some farm equipment, and asks you to take on armed bandits, half-mushroom halberdiers, and fire-breathing deer. The results of the encounters may be the same as in a Sekiro or a Dark Souls, with tons of setbacks and defeats, but nothing about Outward’s combat is fun.

So I enlisted TJ once again to tag-team the brute. We’d played northwards of eight hours of co-op at this point and he had decent gear, which in a game like Outward where your character has no inherent progression outside of the items you’ve collected and the skills you’ve purchased, means everything. But of course, this served only to get us both whipped repeatedly, until eventually the bandit inexplicably caught on fire and died. Neither of us knew how this happened because we didn’t do anything fire-related, and only TJ could actually see that he was on fire (on my screen I just saw that his health was cratering). But spontaneous combustion came to my aid again (as it did in Underworld: Ascendant, another short straw I drew) and we got the guy. 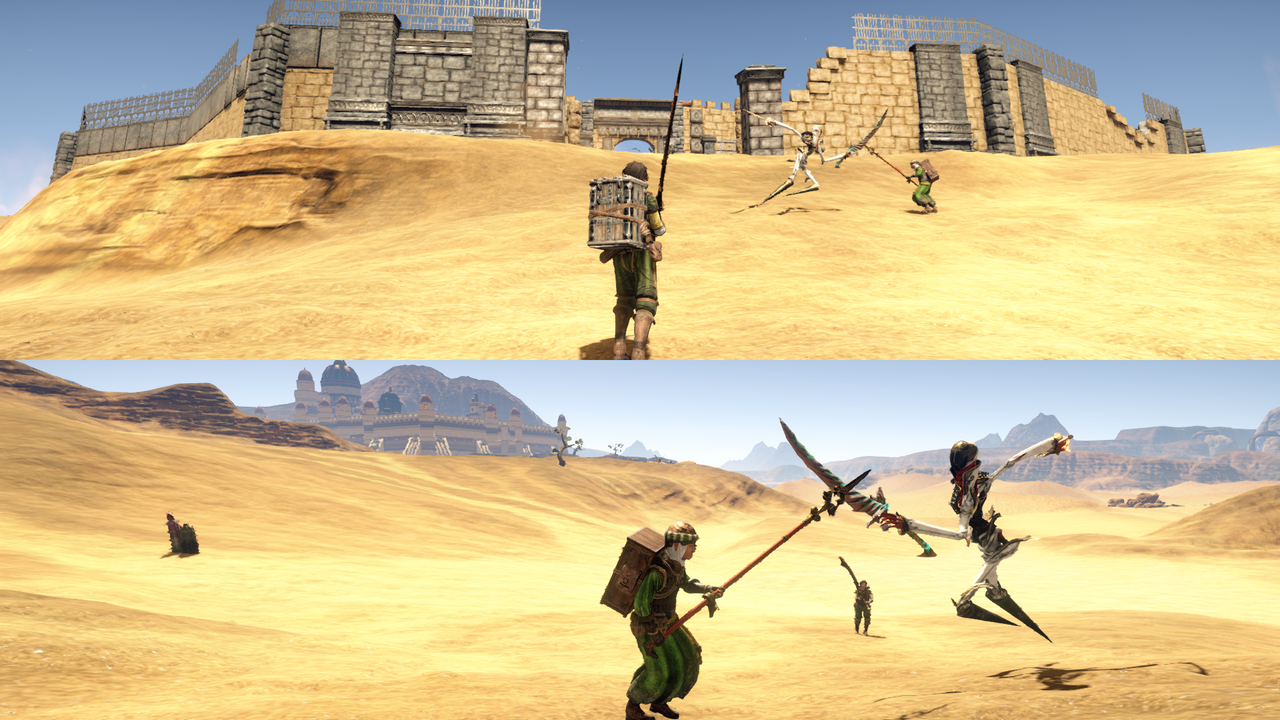 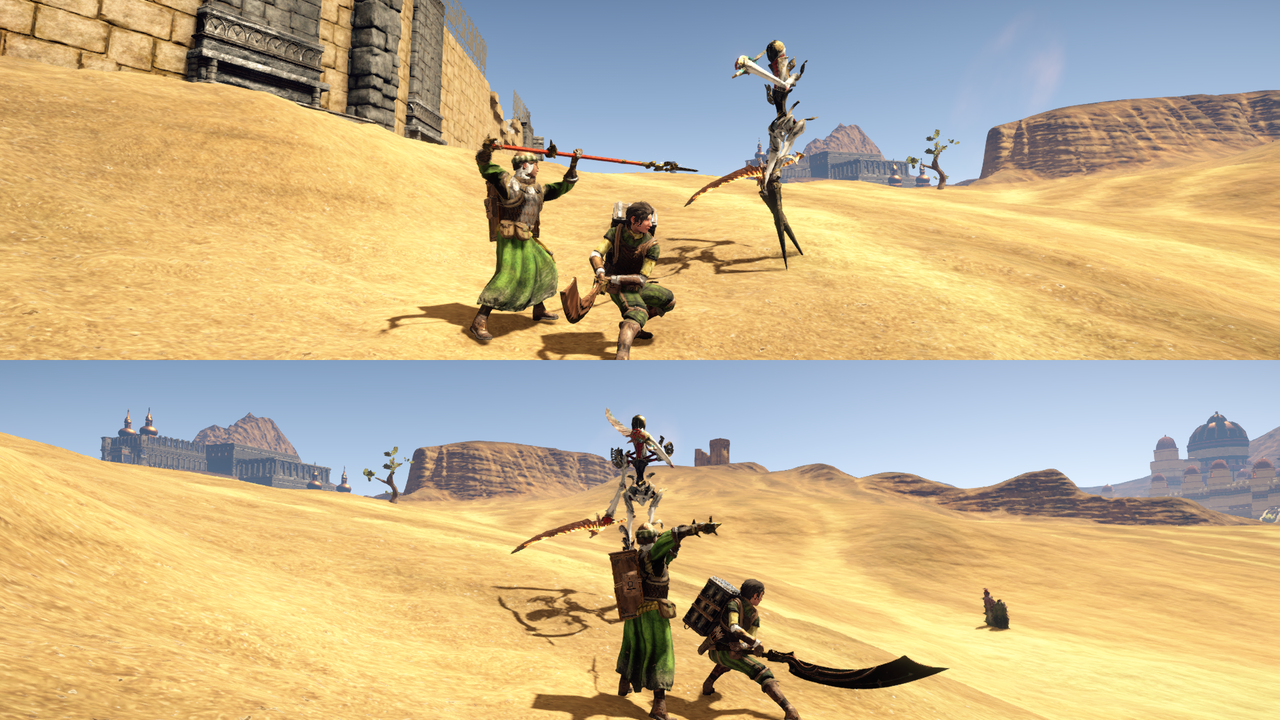 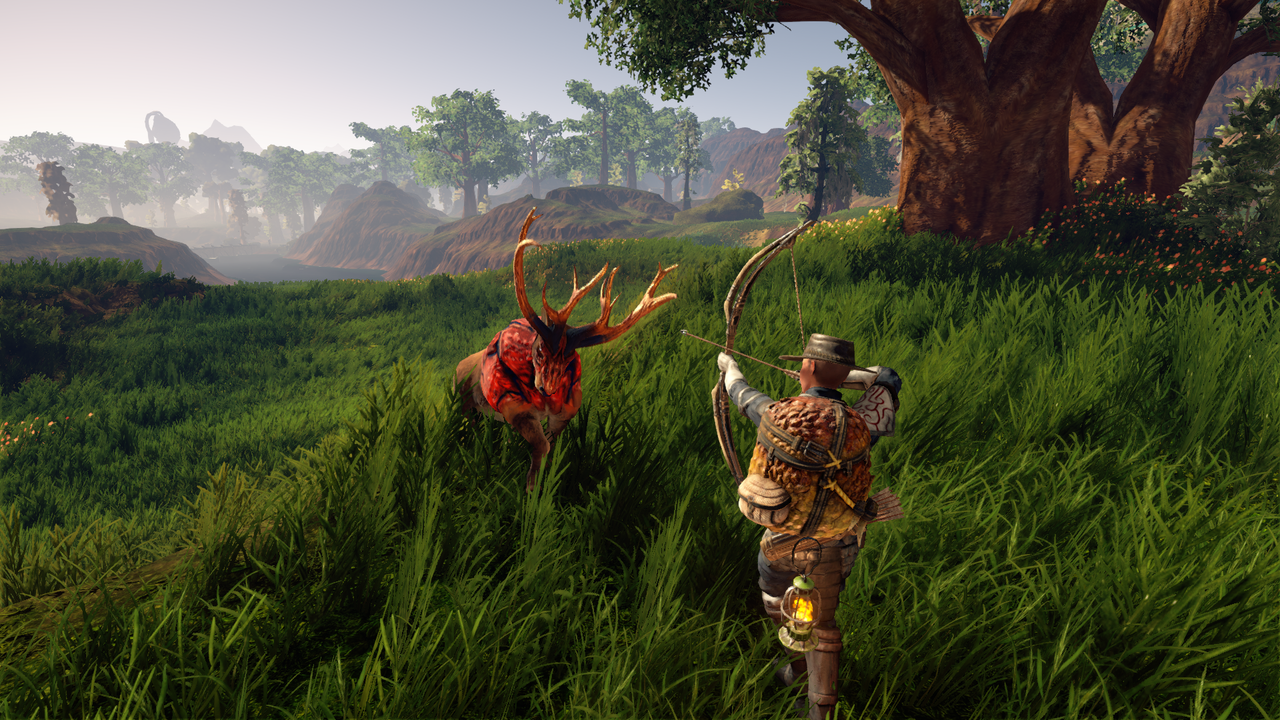 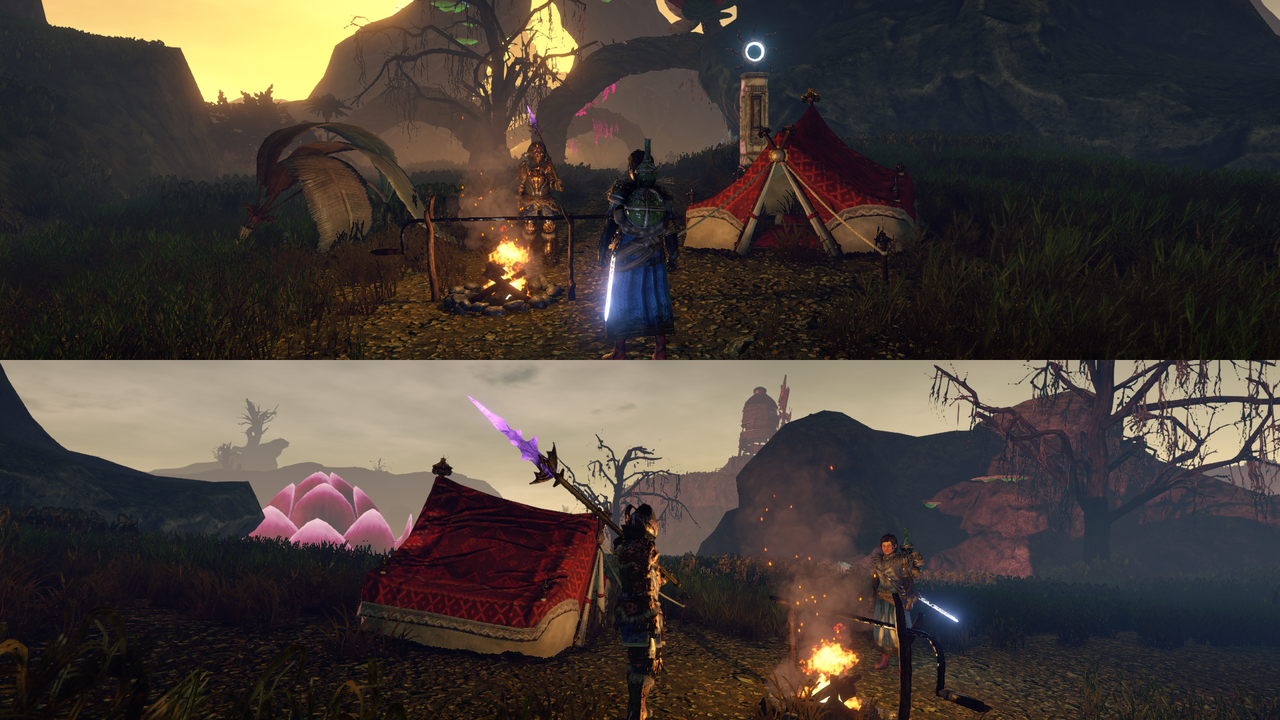 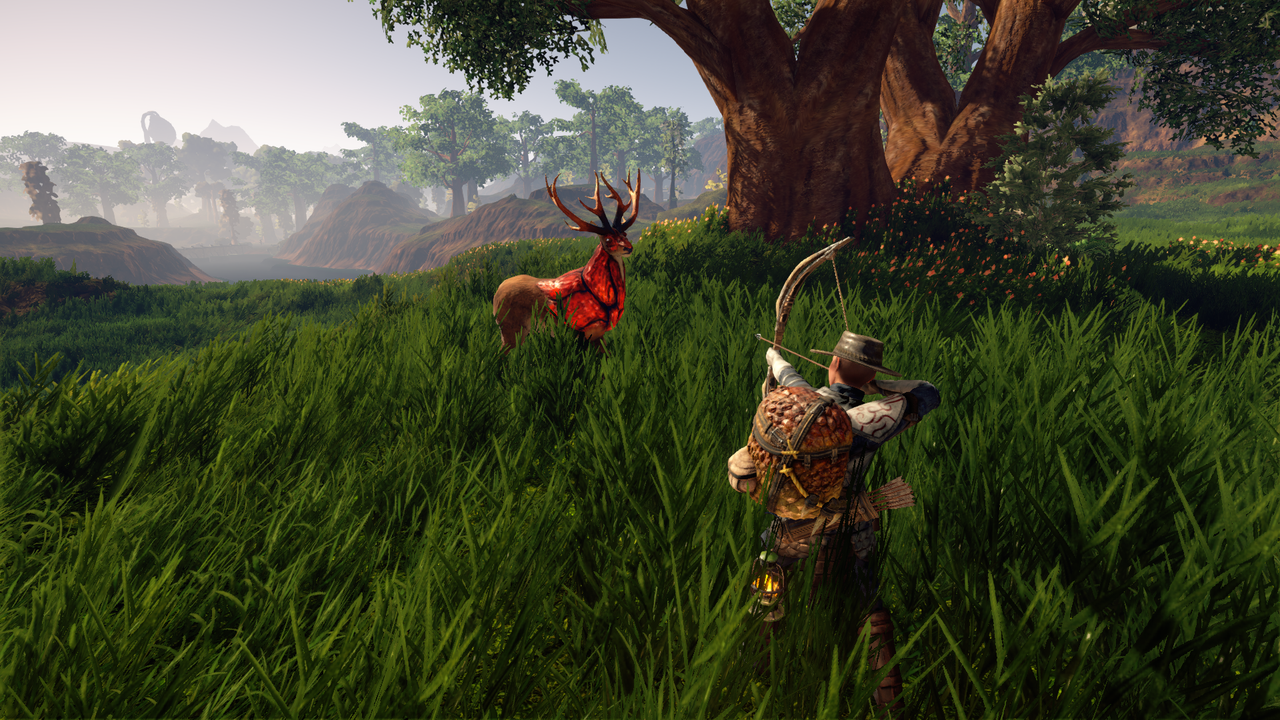 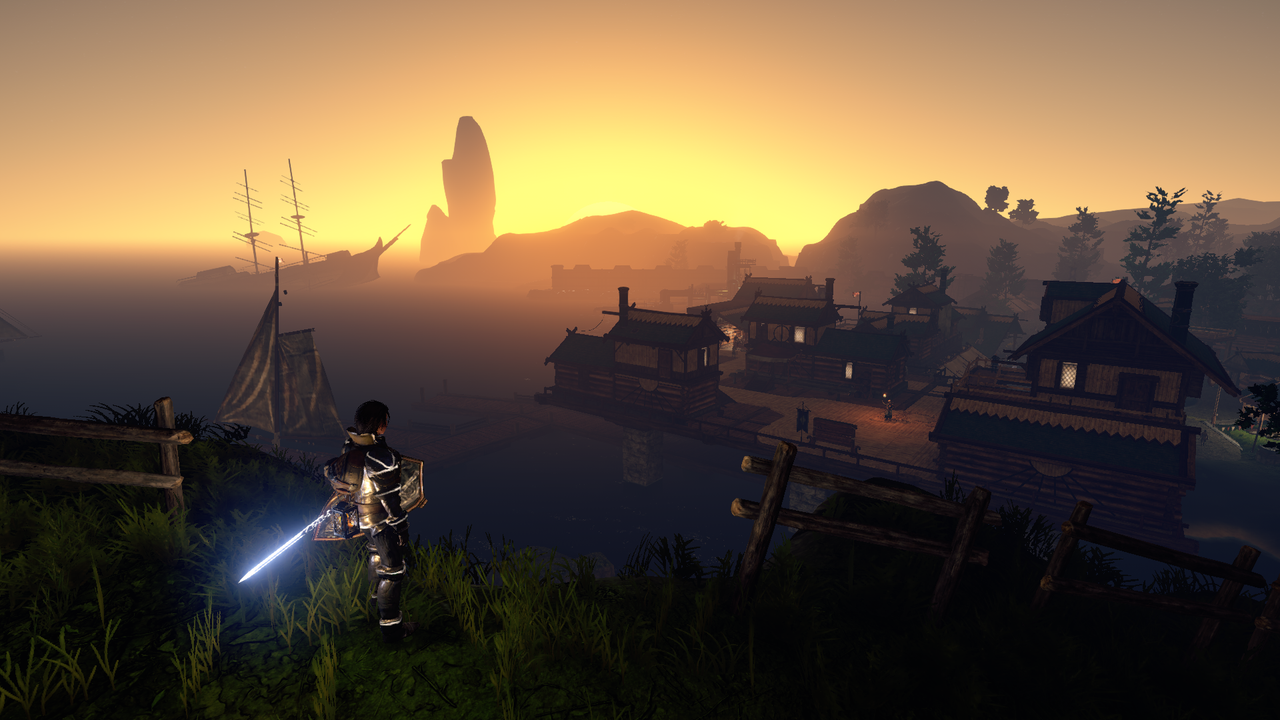 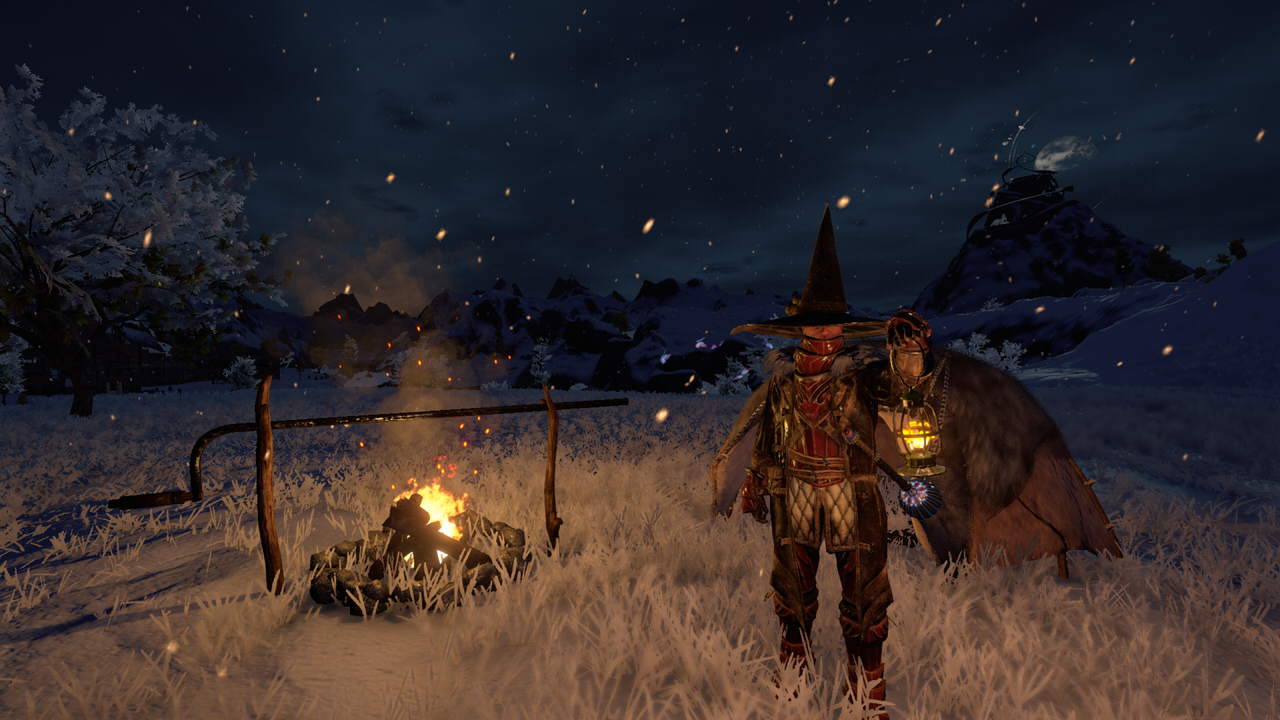 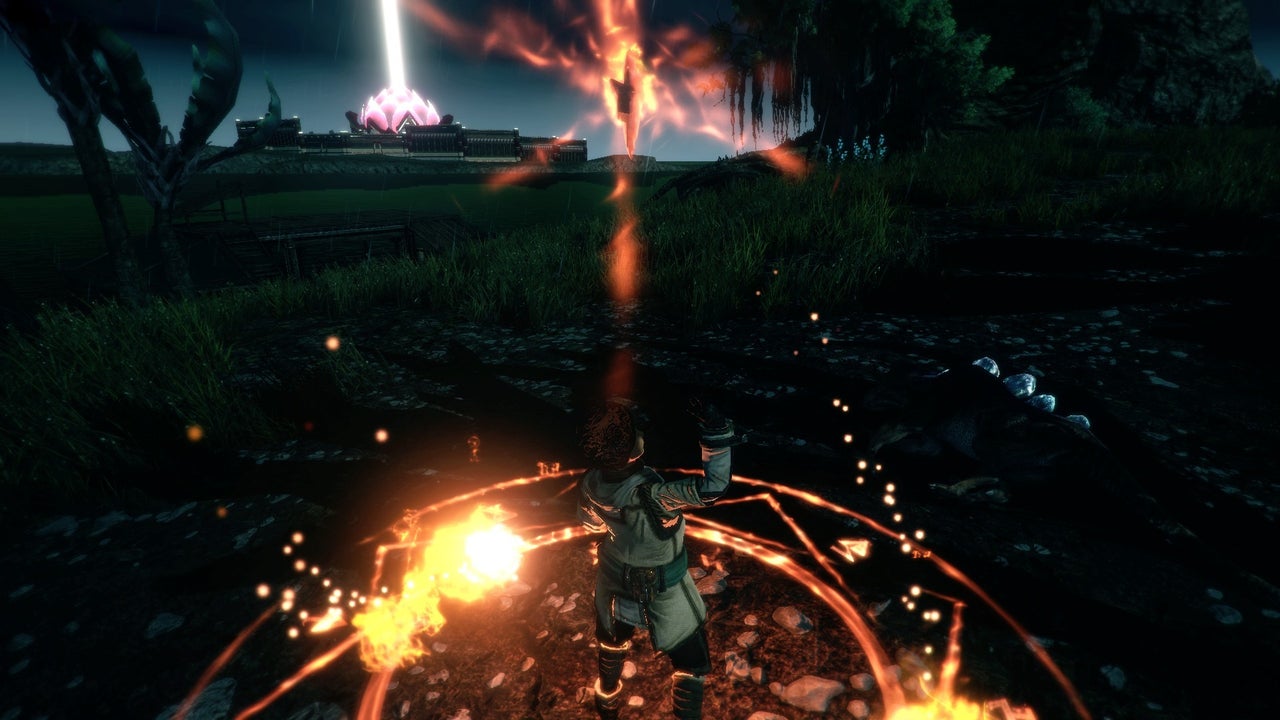 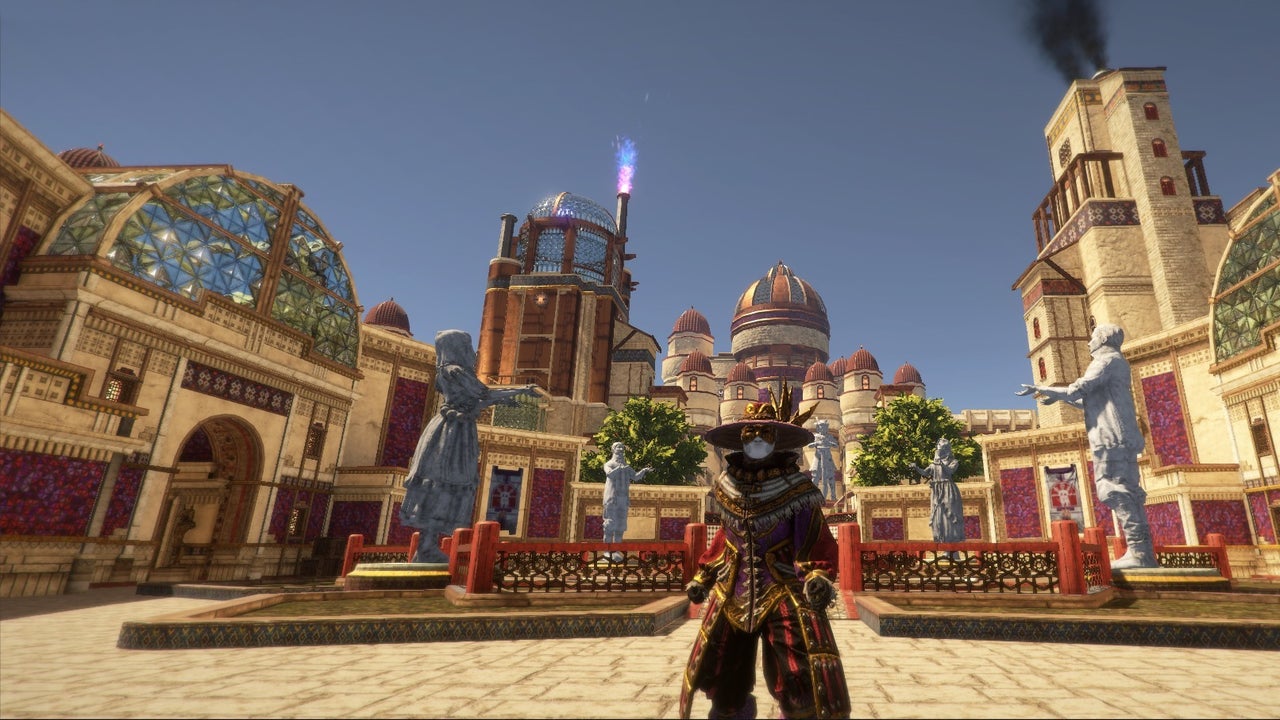 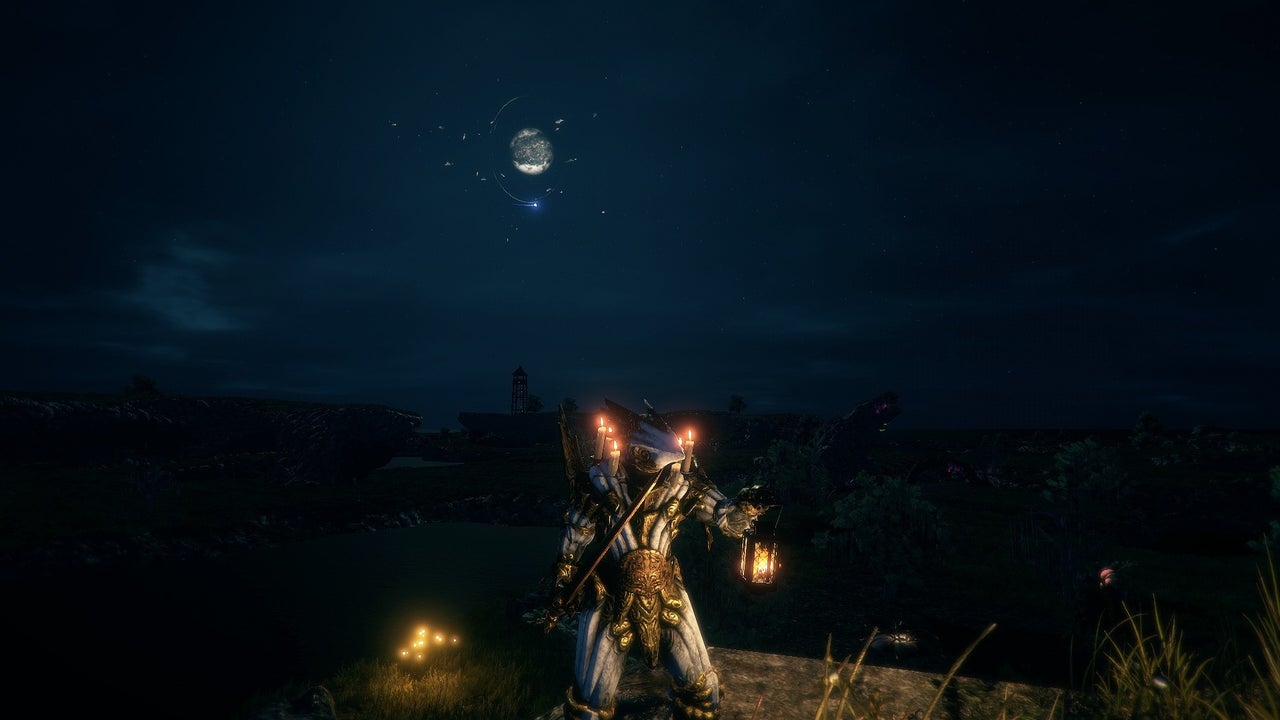 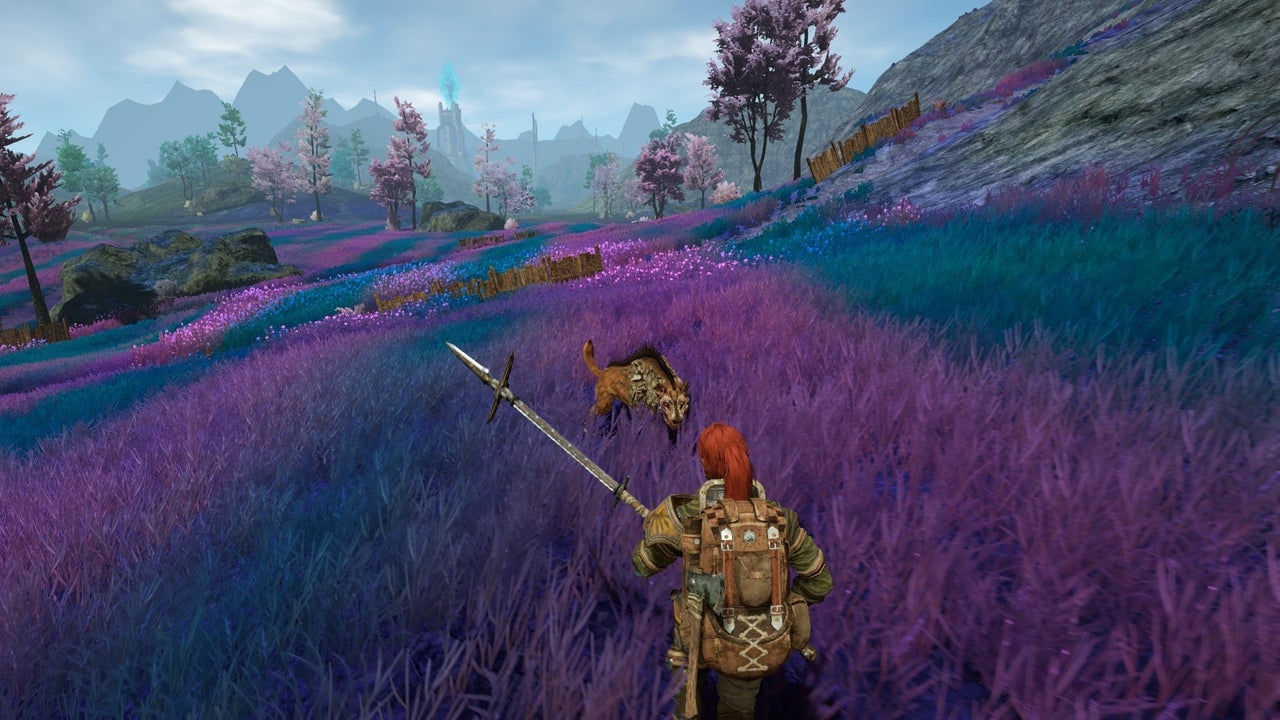 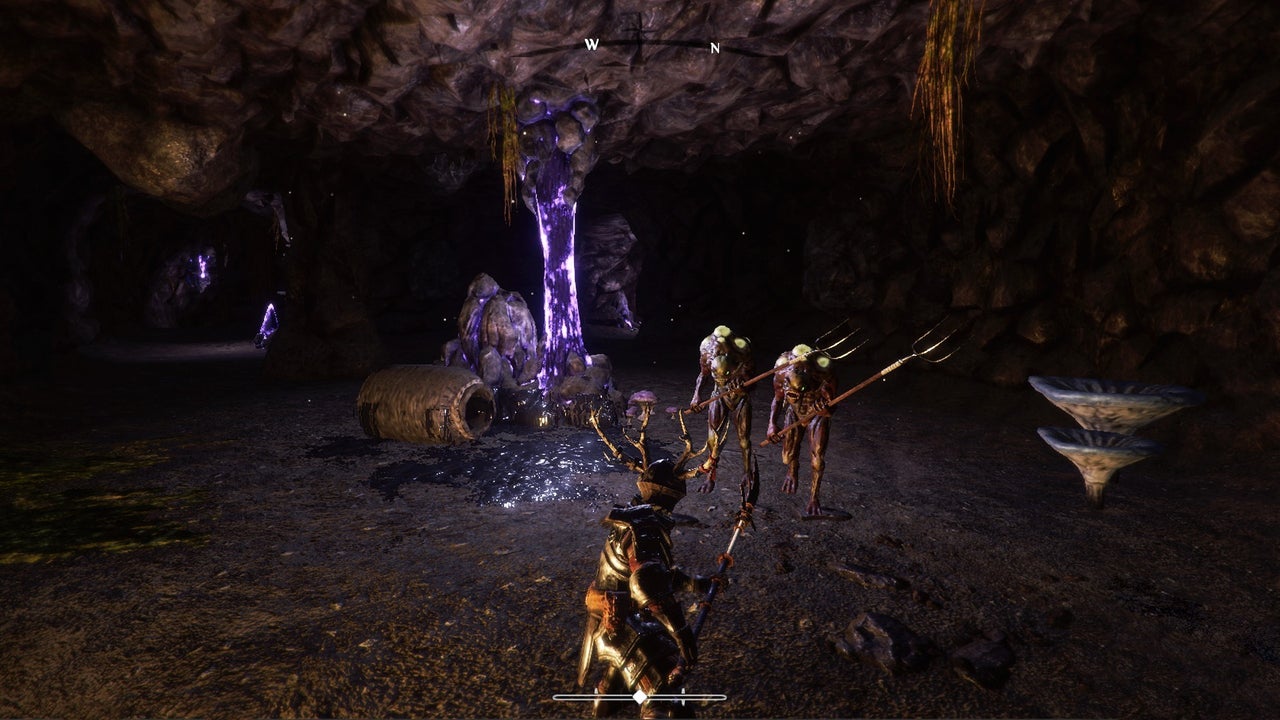 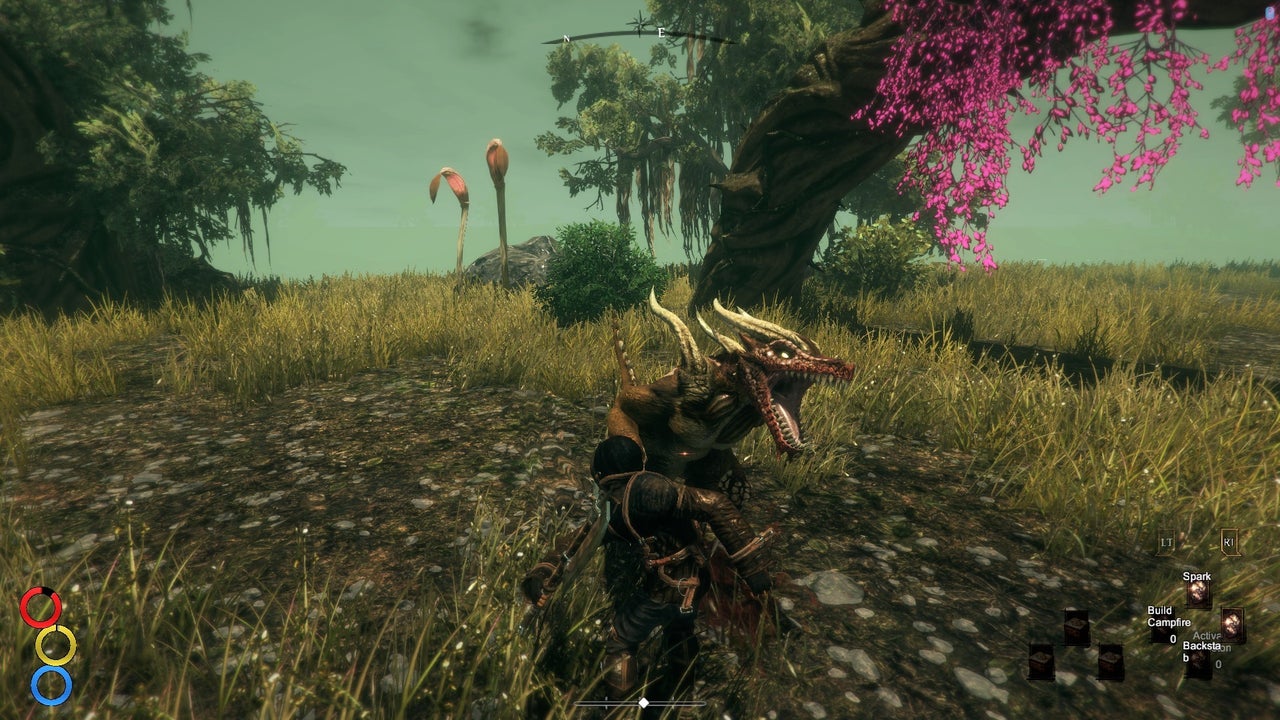 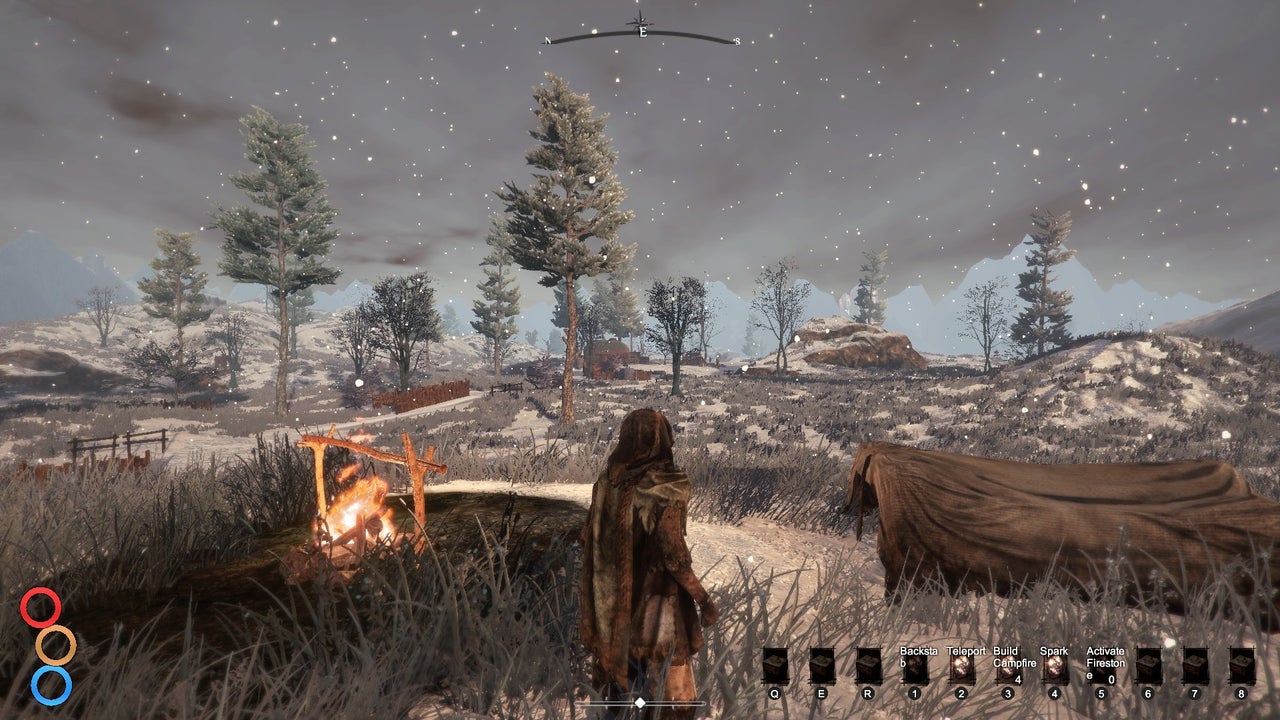 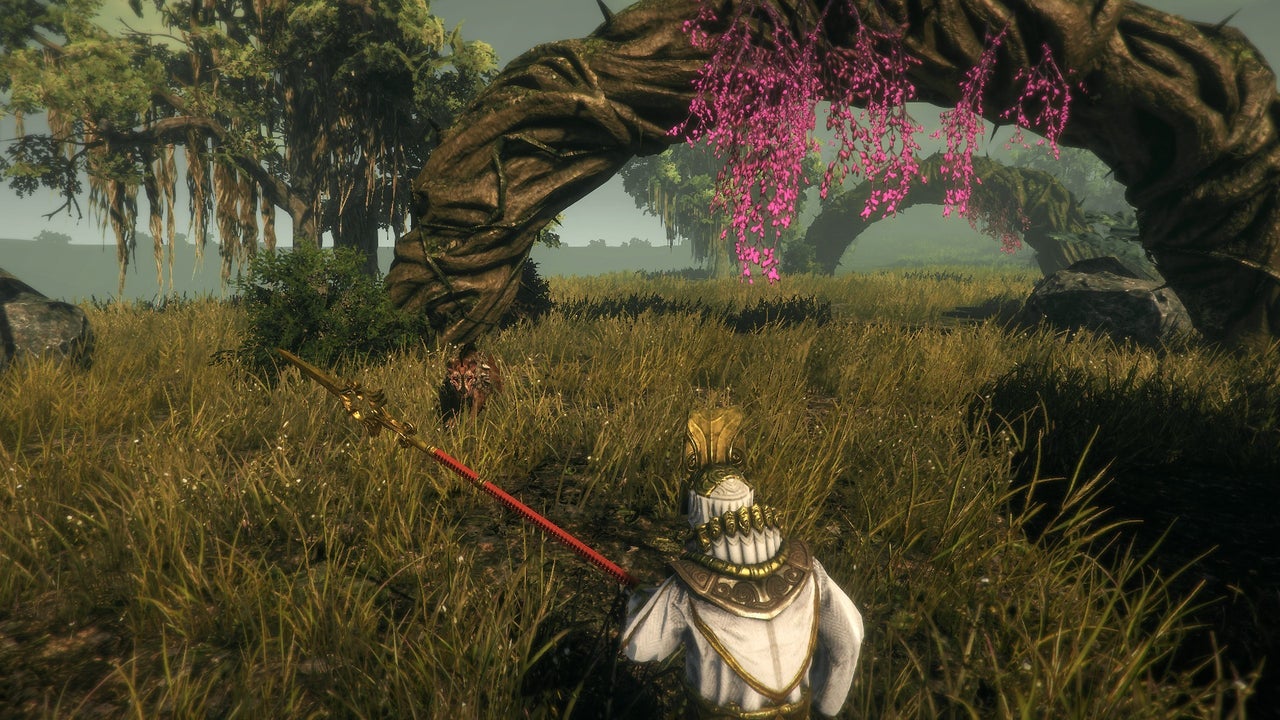 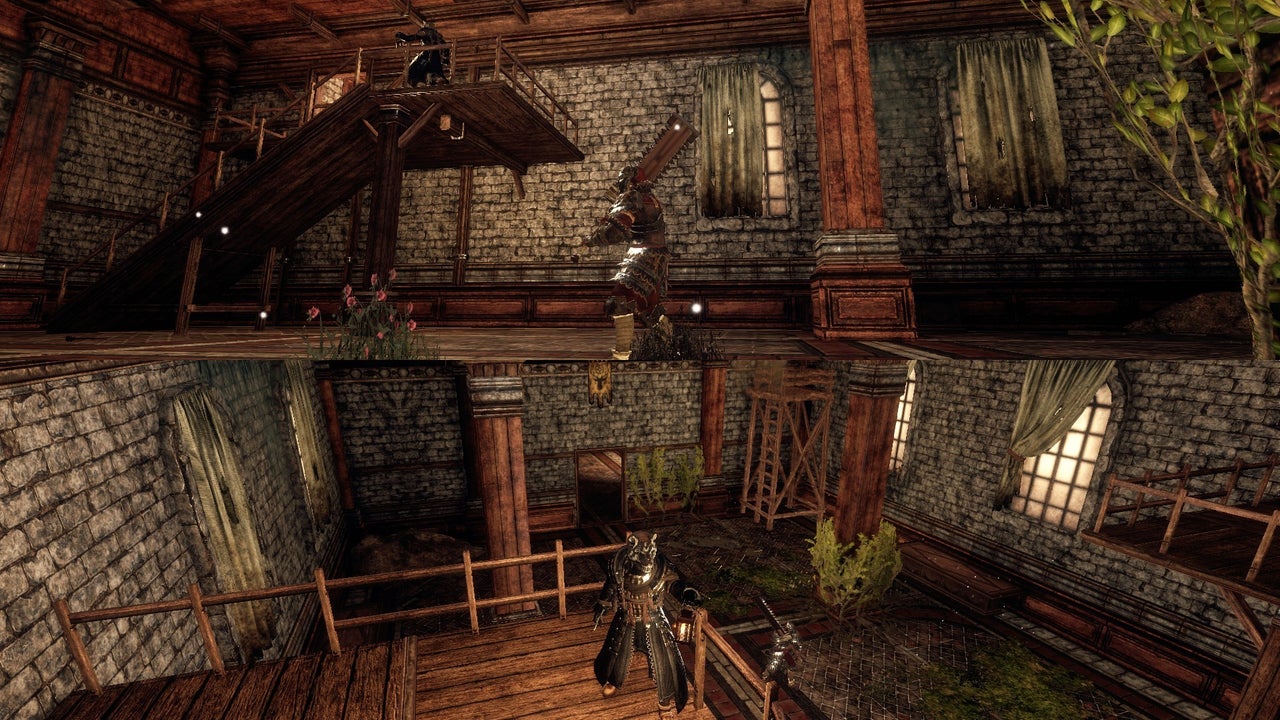 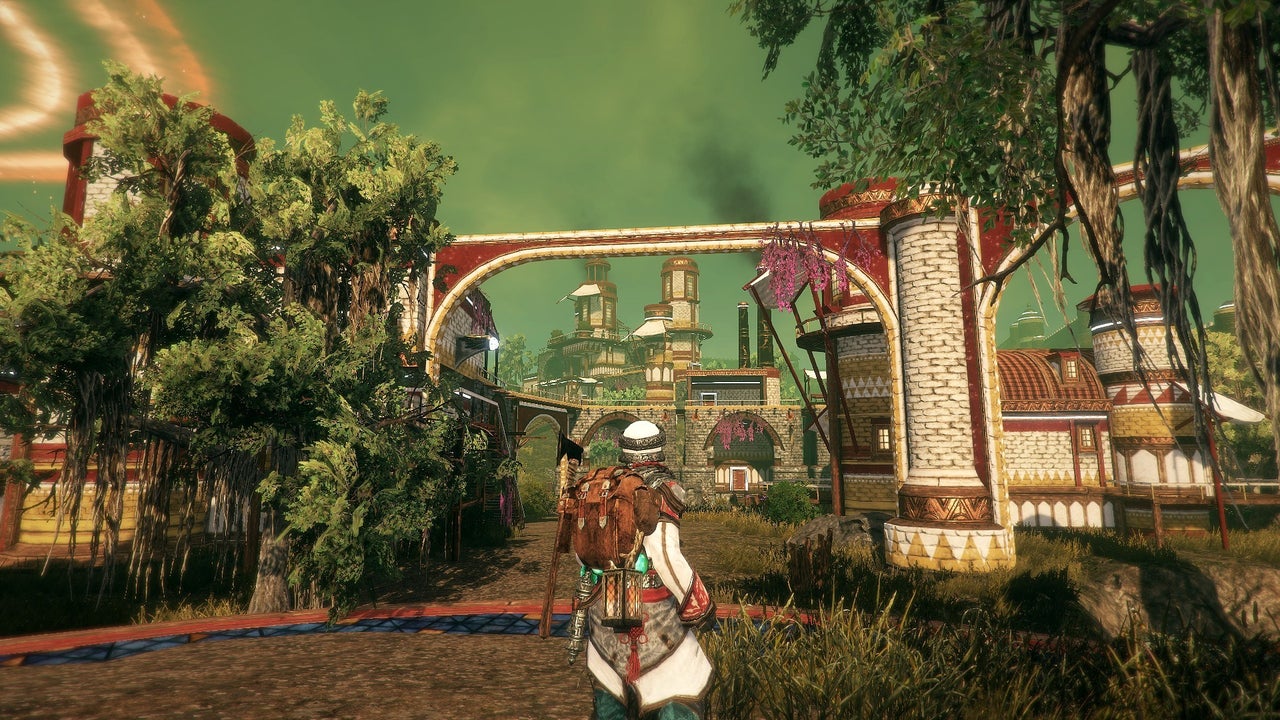 Our rescue attempt could scarcely have gone worse, and the bandits holding the quest giver prisoner beat us like dirty throw rugs. After a couple more tries that, if anything, challenged my assumption that the first attempt couldn’t have gone worse, we decided that our only option to tilt the scales in our favor was to get better gear. So we took a step back and formed a new plan: we’d sell off all the junk we’d accumulated over eight hours of wandering and enduring beatings in hopes of investing in higher-end armor and weapons to see if that turned anything around for us. I knew of a town in another region that sold plate armor for a price we could afford, and we set off for it.

Cue another hour of boring walking to a destination, because Outward has no other means of transportation and no fast-traveling.

Cue another hour of boring walking to a destination, because Outward has no other means of transportation and no fast-traveling, yet separates its objectives by tedious amounts of wide-open spaces. Along the way, I sold off some stuff to make room in my backpack to pick up more stuff. Wealth was accumulating. Better weapons and armor, here we come! Our new plan was not without its setbacks, however. Another death, this time to poison-breathing tentacle monsters that roved a forest in packs, respawned us back in the city we were barred from, resulting in another prompt ejection. I had enough time to grab my pack; TJ didn’t. Ouch. All that decent gear he’d amassed? Inaccessible and effectively gone.

Outward apparently didn’t want me to miss out on the fun of losing everything I had collected, because my turn came next. We were attacked by bandits after getting well and truly lost: you navigate Outward by looking at the hand-drawn map of the region you’re in, which does not have a “you are here” marker, asking people for directions, and heading “that way.” We headed northwest, as we were supposed to, but instead of encountering the city we sought we ran into a fort-looking structure that didn’t have any bad things around it. We thought that maybe this was a friendly fort and that we could do another round of selling and reprovisioning within. It was, of course, chock full of bandits who set upon us like hungry wolves catching the scent of blood.

Everything that represented 30+ hours of progress, gone.

So now I’m unarmed, naked, broke, and it’s snowing, so I’m dying every two or three minutes to exposure: Outward has survival mechanics that require you to eat when hungry, drink when thirsty, and wear clothing that slows the effects of heat and cold. The hunger and thirst mechanics serve no purpose but to inconvenience you when enough time has passed since you last clicked the “use” button on your waterskin or an edible item, and climate mechanics are mostly a background frustration until you find yourself in cloth underwear in a blizzard because bandits are jerks. But now, since I have no way to get my gear back as I have nothing to fight with (and I’ll be honest, probably couldn’t fight my way back into that bandit camp even with all my gear) I have no clothes.

I also have no assurances that my weapons and money are even going to be in the bandit camp even if I could reach it, because I’ve had backpacks of stuff just up and vanish on me before. Because there is no leveling up in Outward and character progression is entirely tied to gear and training you can buy with money, being broke and losing everything I own in a fashion I can’t walk back (hello, autosave and no save slots!) amounts to a hard reset. After dozens of hours, I’m literally more helpless right now than I was 10 minutes into a new game.

This might not be strictly a bug, but this cannot be something the developers intended to happen (we’re reaching out to the developers to find out for sure). After all, I’d died literally hundreds of times before this and the consequence was never a complete stripping of my possessions in such a way as to amount to a square-one setback. 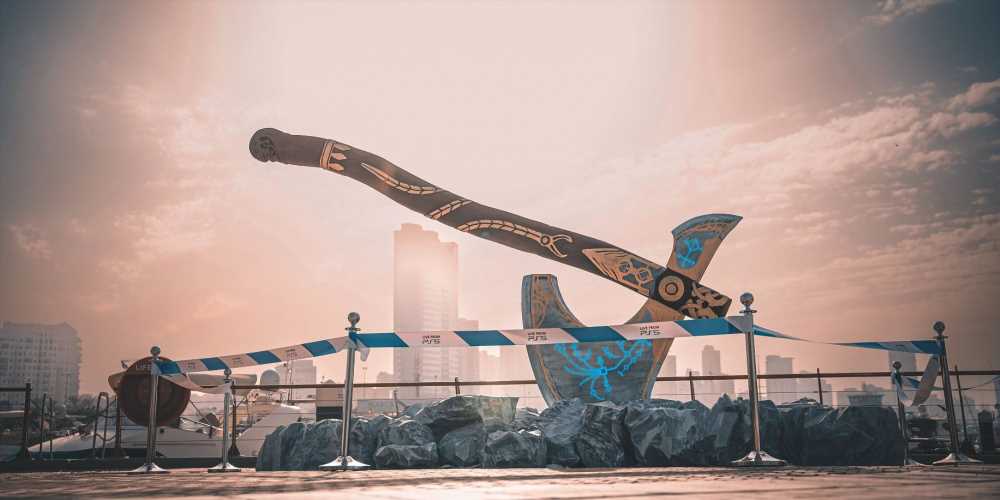