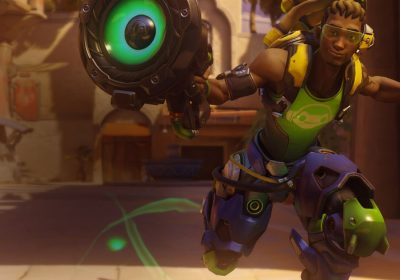 Given that video games have existed since the late ’70s, it is not surprising that this hobby is shared multi-generationally. But just as parents and kids have good-natured spats over sports teams or food preparation, gaming habits can also cause the same chagrin.

34-year old Rob Krum’s bafflement at his father’s hyper-mobile approach to popular first-person shooter Overwatch inspired him to post a short video clip of his dad playing as the musical support hero Lucio in a deathmatch game to Twitter. Speaking with Polygon in Twitter direct messages, Rob said that he felt his father, Craig, who is 65, could improve his gameplay if he stopped flailing around. In the video, Craig enthusiastically moves his office chair to and fro, tapping his keyboard loudly to make his character duck and weave around the map.

Rob recorded and posted the short clip, hoping “maybe to get a chuckle or two from mutuals and maybe some words of encouragement for him to focus a bit more.”

He did not expect the thousands of responses that he received. Much of it was an outpouring of surprisingly supportive and heartfelt messages for his dad from the Overwatch community, which has been regarded in the past as fairly toxic to people who do not fit the traditional shooter player mold.

Many of the replies are sweet, with other Overwatch players talking about how they also move around while playing, or have a parent who plays video games with them, despite being older. There’s also a handful of people cheering Craig on, as well as a reply from Lucio’s English voice actor, Jonny Cruz.

While his gameplay might cause his son (or his office furniture) some distress, Craig told Polygon that he’s been happily playing the game since late 2016, and maintains a Gold rank in competitive, mostly as Lucio and Mercy. He said that he got into both heroes because of his former experience playing as a healer in World of Warcraft. While Lucio and Mercy sometimes get derided as being “easy” or less aim-dependent than other heroes, they still require a lot of skill; healers must stay alive themselves and also prioritize abilities to boost their teammates in team fights. The different character types and different skills required allow Overwatch to remain a good entry point for many different kinds of gamers to the competitive first-person shooter genre.

Rob is a tank player, a natural complement to his father’s support leanings, but the two don’t play together often. The reason is as relatable as the rest of their story. “I feel he has weird callouts (on voice chat) and he thinks I don’t communicate enough in voice (chat),” said Rob. “I just feel it gets awkward sometimes.”

The two are both active players, each having thousands of hours racked up in the game; it’s clearly a passion they both share. Their friction is also underlined with a lot of love and respect from the younger Krum. Rob’s relatable frustration gives us an insight into the future as more gamers turn into parents and grandparents alike.