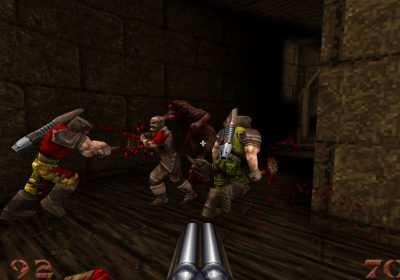 Bethesda Softworks, the publisher behind the Quake remaster didn’t have to release new content; they could have just ordered enhanced visuals and called it a day. But no, Bethesda and MachineGames, the developer behind the updated Quake, delivered a surprisingly large update for the game on Thursday, including a brand-spanking-new Horde Mode (along with some quality-of-life improvements and bug fixes).

Horde Mode will let up to four players fight off waves of enemies and bosses in co-op play. Players can try their hand at it solo, or bring bots along for help on four maps purpose-built for the new mode. Quake also supports a new add-on called Honey, a mod that brings new maps like crypts and underground temples to the game.

The Quake remaster launched in August and updated the game to run at 60 frames per second and at 4K resolution. It also got a new expansion from Wolfenstein developer MachineGames, the same studio behind Quake’s new Horde Mode.

In addition to Steam, the PC version of Quake is also now available from the Epic Games Store.

The original Quake was released in 1996 and served as id’s successor to the Doom series. It launched as a single-player FPS, but went on to become a popular multiplayer arena shooter. Bethesda acquired id Software and its franchises in 2009, which now serves as publisher for the series.